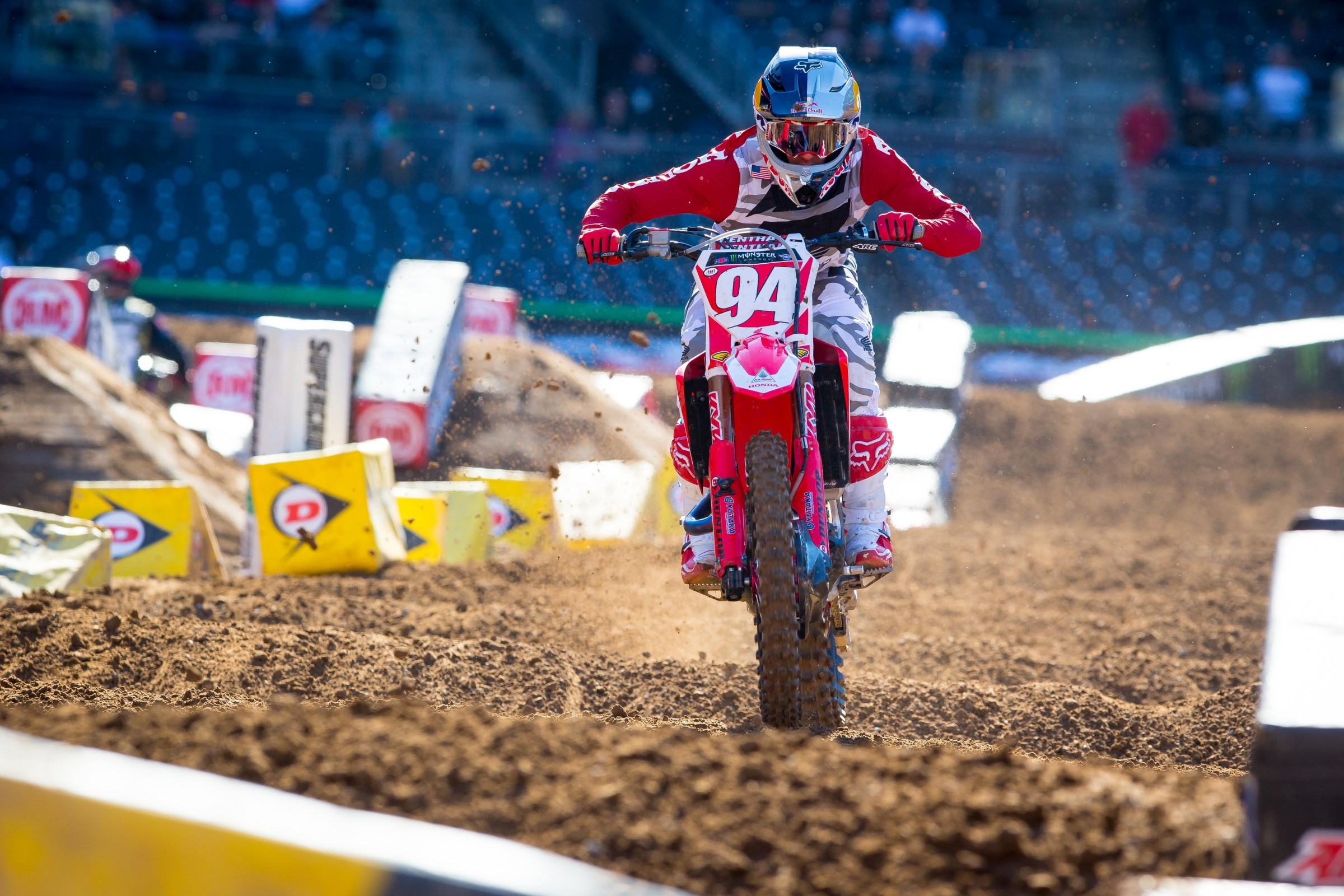 Unless you live under a rock, you know Ken Roczen is two for two this season. Both wins were very different from each other, though. The first was a runaway where he was never challenged. He got out front early and made it look easy. This past weekend in San Diego, however, was all out war for just over 21 minutes. He was able to work his way around Ryan Dungey at the seven-minute mark and then fend off Ryan’s late race charge. In the first round, he was better in nearly every section of the track. San Diego was a bit different as I only saw one big difference—the whoops.

The whoops are often a huge topic of conversation on any given race day. They always shape up differently and change as the day turns into night. They are tough for the riders of course, but they are also a nightmare for the chassis and suspension technicians. To set up a bike for the whoops, you generally have to compromise how it performs on the rest of the track. What I mean by that is simple to understand, but hard to solve.

Supercross whoops require very stiff suspension. The forks need to be stiff at the top (initial) part of the stroke so when the front tire hits that first whoop, it doesn’t compress. If the forks are too soft, they compress and all of the weight shifts forward. Not only is that scary for the rider, it also kills all of the forward momentum. The idea is to have the front end stay up high, propelling the rider on a flat plane across the whoops. If the shock is too soft, it’s just as bad—or worse. In that scenario, the shock will compress deeply and what happens when shocks compress? They rebound violently. Have you ever seen a rider get bucked over the bars and wonder why? That usually is the result of mistiming a whoop, the shock compresses and when it has nowhere left to go, it unloads that force back upwards, the seat hits the rider in the butt and off we go.

It happens all the time and that’s why you see shorter riders cut down their seat, raise their footpegs, and lower their shock and subframe. They are trying to add clearance and increase their margin of error in that scenario. So, put simply, the rider is trying to keep the bike perfectly level while physics try to see-saw the machine each time the front and rear tire deflects off the whoop. Initial stiffness in the fork and shock prevents that deep compression, fights the see-saw effect and also keeps the rider from getting ejected.

This is all well and good but this stiffness has a negative effect, too. Trying to turn an incredibly stiff bike is tougher than most riders have experienced. The turn angles on supercross tracks are very tight. That means the rider is fighting the bike to turn most of the time. The number one thing that can help a rider turn is getting the front end to become lower than the rear, giving him leverage to steer. As we just talked about, though, stiff supercross settings prevent that from happening. That’s where the big compromise comes in for all supercross testing. How stiff can you set up your bike for the whoops and also find a way to turn it? James Stewart and Chad Reed are notorious for having super stiff settings. They are also two of the fastest riders to ever hit a set of whoops. But, if you’ll remember, James has also had a long history of losing the front end and crashing when entering turns. That is directly caused by his stiff forks. When the forks don’t compress far enough, too much is asked of the front tire to hold traction at that speed and lean angle. That is when you’ll see James tip over for seemingly no reason. His forks aren’t allowing enough pressure on the front end, his bike isn’t compressing forward as he enters the turn, his tire doesn’t receive the necessary weight and “pushes”. That push is simply a slide that is sometimes recoverable and sometimes isn’t.

So, what does all of this mean for Ken Roczen? If you go back and watch the main event from San Diego, Kenny was unmatched on whoop entry speed. When he would land from the double leading into the whoops, he would pick up more speed and hit the first three whoops faster than any other rider in the race. Most riders are always trying to maintain their speed when entering whoops. Kenny was taking that up a notch, grabbing a handful of throttle on the landing of the double. He was making valuable time on Dungey in those whoops, and he did it in the first three whoops. He was going significantly faster at the beginning of the whoops which allowed him to maintain that speed all the way through.

Dungey wasn’t as aggressive in the first three whoops and would then fight to accelerate as he continued through. It’s much easier to manage whoop speed than it is to build it halfway through. I watched them lap after lap and it was consistent the entire race. Kenny was more confident entering the whoops than Ryan. Period. That’s typically a confidence situation. Kenny was more sure of how his motorcycle would respond than Ryan was. That’s not to say that Kenny’s bike was handling better, it’s just how they both felt mentally about the situation. I have seen riders take my own motorcycle and hit the whoops much faster than I was willing to. The bike was capable but I didn’t feel as confident as they did. This could be that exact same deal or it could be the setup itself. There’s no way to know that but the evidence was clear: Kenny had the confidence edge entering the whoops, no matter what the reason.

It will be fun to watch these two go to battle every Saturday. Kenny is supremely confident right now and it’s showing in his riding technique and also in the results column. Dungey made huge strides in just seven days and nearly won San Diego. Ryan probably saw Kenny gapping him in this section during the race and I would assume breaking down his race footage will tell the tale, too. Will Ryan make subtle bike changes to combat this or will he make a mental adjustment? Assessing one’s own strengths and weaknesses is vital to improvement. This series is a marathon and there is time to solve problems and shore up holes in your game. Those whoops were one area that made the difference between winning and losing and if I had to bet, Ryan will spend some extra time on that this week.