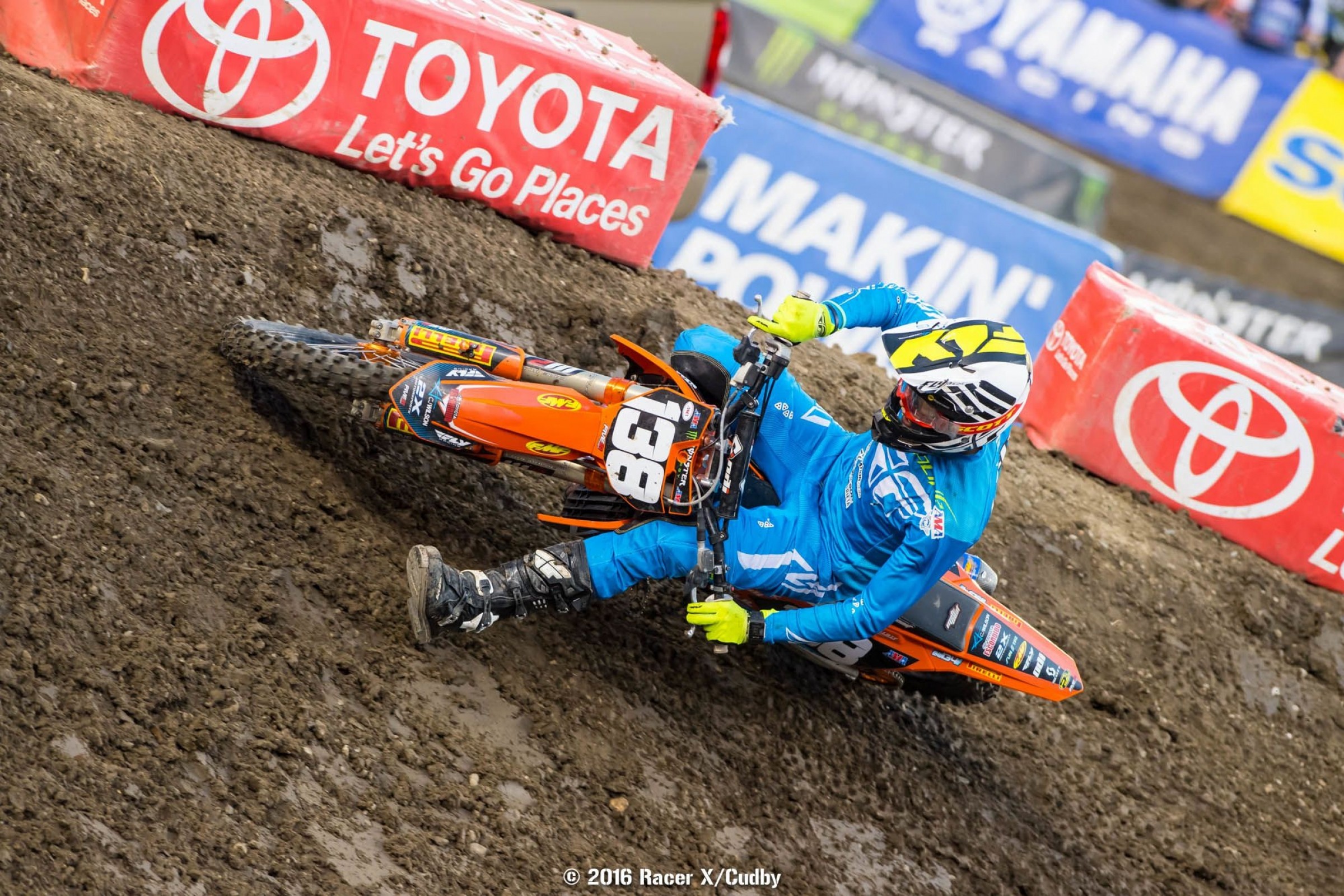 If you were watching the 250SX heat races on Saturday you may have heard Jeff Emig mention an unfamiliar name toward the end of Heat 1—Blake Lilly. A resident of Wildomar, California, Lilly had made just three supercross main events since turning pro in 2014 previous Anaheim 1, with his best finish a 17th in Las Vegas that same year.

We caught up with the relatively unknown CJ Wilson KTM of Murrieta rider to see how his season opener went, see what the deal is with his CJ Wilson (former pitcher for the Los Angeles Angels of Anaheim) sponsorship, and what his plans are for the rest of the supercross season.

Racer X: Not a lot of people know a lot about you. When was your first pro race?
Blake Lilly: My first pro race was in 2014 Houston supercross. I qualified for the night show, I think I qualified like 21st­­ or something, and then I missed the main by a couple spots. I think I got like seventh or eight in the LCQ.

So you finished 14th at Anaheim, which is the best finish of your career. Can you take me through how your night went?
The whole night was actually my best. It was the first time I qualified straight out of the heat race—I got eighth. And then the main event I got 14th. The heat race went really well, I didn’t get that good of a start but I snuck around the outside of the first turn and put myself in a pretty good position. I think I pretty much was in eighth the whole time. I was behind [Tyler] Bowers and tried to latch on the back of him as best as I could and was able to finish eighth. I was really … that was a huge accomplishment to go straight out of the heat race. Then in the main event I didn’t get that great of a start, I just tried to put the best 15 minutes that I could together. I felt really good, unfortunately I got passed on the last lap, but I was pretty happy with the way the whole night went.

Were the 15-minute mains a little strange for you?
It just felt really long! [Laughs] I looked and I guess we still only did 15 laps, but man, it felt like we were out there forever.

[Laughs] Did you have a mechanic or anyone helping you?
Yeah, it was just my dad. He’s my mechanic.

And he was running the pit board for you?
Yeah, and he was even like, “Man the main felt like it was forever!” [Laughs]

So with that being your best finish ever, what was your goal heading into the night? Was it just to make the main event? Was 14th a surprise to you?
For the first round I guess it kind of was a surprise. I’ve been working with Jay Whipple training, and the goal is to finish inside the top 10 this season. I’ve been working toward being into the main and finishing further up than I have before and getting from a 15th to a 10th or whatever. So, I wouldn’t say it was necessarily a surprise, but maybe more a surprise that it happened so early for me in the season.

And you’re doing all the West Coast rounds, right?
Yeah, that’s the plan.

And how are you getting to each round? Just driving?
Yeah, I’ve got a Sprinter. As of now it’s just going to be me and my dad driving to every round and making it happen.

You mentioned you’re training with Whipple. How’s that program going for you? Is it anything different than what you were doing last year?
It’s nothing crazy, but he’s definitely helped me a lot. I’ve showed a lot of improvements since I’ve turned pro. I’ve gotten better every year that I’ve raced but he’s definitely helped me link the puzzle together. I feel like I’m riding better than I ever have. My speed’s a lot better and I owe a lot of that to him and the program that he’s put together for me during the week.

So during the broadcast Jeff Emig said that CJ Wilson is a sponsor of yours. But he actually owns the dealership that sponsors you, right?
Yeah, he owns CJ Wilson KTM of Murrieta. He also has a BMW motorcycle dealership right next to it. I mean, it’s kind of being sponsored by him, but it’s really the dealership that’s sponsors me.

Do you know anything about why he decided to open a dealership?
He’s into motocross. I think he’s into kind of all motorsports. I know last year he was at one of the Anaheim rounds. He also … this isn’t the only dealership he owns; he also owns one in Illinois that carries a couple manufacturers. I know he’s into it. I think he has a bike of his own, but I don’t know how much he rides or anything.

Awesome, that’s a pretty unique sponsor. Do you have any other sponsors you’d like to thank?
Obviously CJ Wilson’s KTM of Murrieta, they’re a big help for me. Toyota of Escondido, Fly Racing, 100%, FMF, ODI, my parents, my girlfriend Jordan, 2X Motorsports, MotoSeat and Five18 Designs. I think that’s all of them.