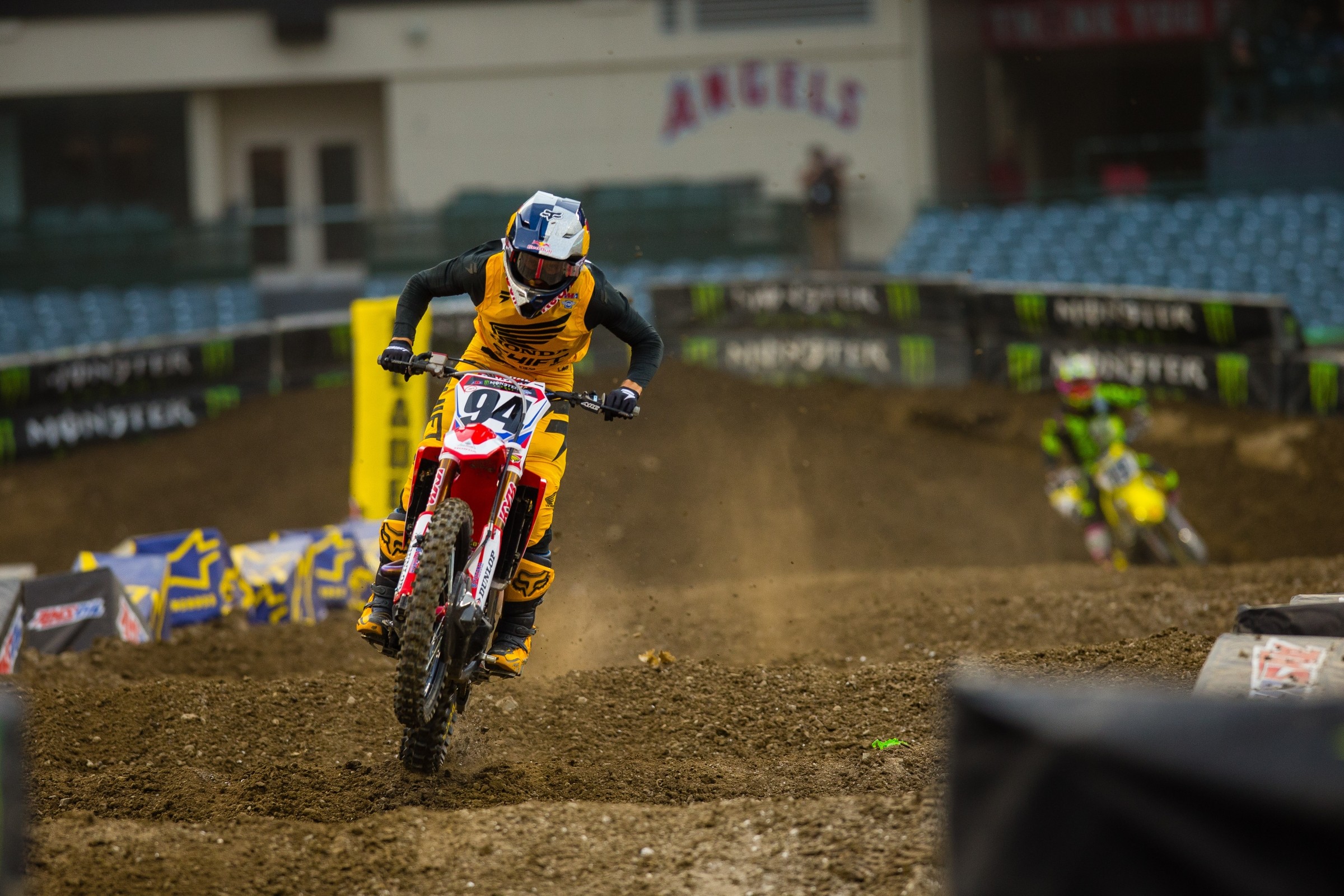 … this story isn’t about politics.

This story is about how hard it is to actually be fair covering anything, even something like dirt bike racing, which means virtually nothing when compared to important things like presidential matters. Plus, reporting should be easy, right? “Just give me the facts, don’t give me your slant.” I get that concept and it sounds right, except even facts are debatable, and how they’re presented still gives the opportunity for slant.

I’ll show you. This is my seventh season running this website, and I’ve spent an embarrassing number of hours agonizing over how to present news fairly, even when it should be quite simple (credit also to my right-hand website man Chase Stallo, with whom I’ve burned through entire keyboards and cellphones as we debate the most fair way to present the news). I’ll let you inside to see how it works with our latest example, which came at about 2 a.m. in my hotel room in Anaheim.

(Oh how I wish I had something more fun to talk about doing in a hotel at 2 a.m. on Saturday, but racing is life, kids.)

Here’s how it goes. Ken Roczen romped everyone at Anaheim 1. He did. He was also the fastest guy at the Monster Energy Cup and the fastest guy in Lucas Oil Pro Motocross. He’s putting together an impressive run, one that might indicate he’s not about to take over, but has already taken over. But when you try to figure that out, it gets murky.

You can use his Anaheim 1, MEC, and 450MX success to make an easy argument that there’s a clear and present danger to every other rider. Or, you can declare those facts useless, because Ryan Dungey is still the Monster Energy Supercross Champion, and he’s won three titles without ever once winning the opening round, and he’s the most consistent rider ever. So, if you really start praising Kenny, for example, is that disrespectful of Dungey’s accomplishment of being, you know, the actual champion? If you get too crazy on the “Wow, Kenny is looking really good right now?” are you just discounting Dungey’s amazing consistency, and that it’s such a long season?

You can make an adjustment, then, and try to downplay Kenny’s run. It’s only the opener, and Kenny has won this race before only to not emerge as champion. But to downplay it, doesn’t it become almost disrespectful of what Kenny just did? A 16-second win is something. Nearly grabbing the Monster Million in a debut race for a new bike is something. His dominance outdoors is something. His late-season surge in supercross last year is something.

Plus, he’s now backed by Honda HRC, the real team Honda. This is back to the big-budget, big-tech, big push from Japan that dominated supercross for 15 years. Doesn’t that, potentially, make this story bigger and more legitimate?

So there I was, at 2 a.m., trying to figure out how to make the most accurate presentation of the facts. I could have written that Roczen led every lap and won by 16 seconds, but there’s a results sheet to show that. Reporters must give you more, they must answer not just the what but also the how and why. So, at 2 a.m., I decided to make the call. I was going to make Saturday night’s win seem big. Here’s the opener of the Saturday Night Live story posted that evening.

It’s the sleeping giant, the elephant in the room, the thing that goes bump in the night. Good racing is what every fan wants, but there’s been this little threat to close racing and parity around these here parts lately. The potential power of both Team Honda and Ken Roczen is well known. Honda hasn’t won consistently in supercross in a long, long time, but the legacy of the brand will never be forgotten. There was a time when Honda could not be stopped, and no matter how far in the rearview that falls, everyone knows the brand could always awake someday again. Then there’s Roczen, who has undeniable talent. There are no guarantees that Honda or Kenny will hit on all cylinders, because nothing is guaranteed in racing. However, everyone does know that if they do both hit a stride—and together—it might be very scary for everyone else. It certainly was tonight at the Monster Energy Supercross opener in Anaheim. Roczen and his HRC CRF450R were flawless. He was fastest in the first qualifying session of the season. He won his heat race by leading every lap. He then led every lap in the main and won by a huge margin. He is coming off of a dominant Lucas Oil Pro Motocross campaign and a Monster Energy Cup where he didn’t win overall, but won two of the three main events. This is the direction things are trending for Kenny and Honda, and that’s why everyone pumped on close racing has to be a little worried, because no one was getting close to Roczen on this night.

There. I did it. I spent an hour trying to decide if Kenny’s win was “wow” or “meh” and eventually I had to make a decision. I decided it was wow. Now, it’s entirely possible it won’t mean anything, and we’ll have a variety of winners, and Roczen won’t even win the title. But it’s also possible that this win did mean something. The facts are the facts—16-second lead, 16 rounds to go—but it’s the presentation of the facts—the interpretation of what they mean—that really make the story. Otherwise you could just read spreadsheets and bullet points all day.

So we’ll see if I got it right. Anaheim 1 was either scary for anyone not named Ken Roczen, or just another crazy opening round that doesn’t actually portray anything that will happen over the bulk of the season. I guess we’ll find out soon enough. And that actually is a fact.