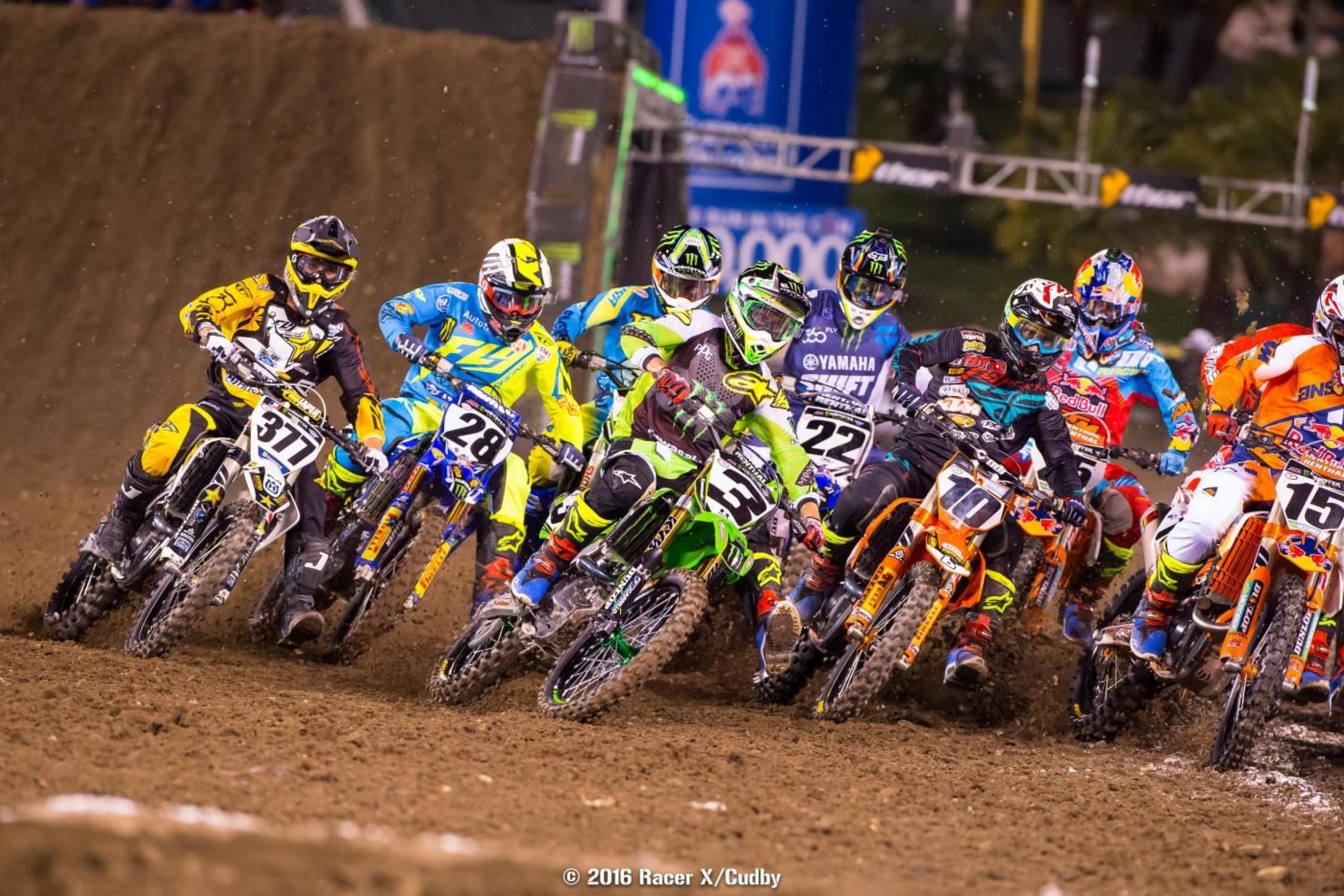 We hope you enjoyed Christmas and New Year’s with the family, but we know for hardcore moto junkies like us, nothing beats Anaheim week. Nothing. Getting to see how the 2017 field stacks up is akin to opening many huge gifts. Maybe too many gifts in fact.

During our recent Fly Racing Racer X Podcast with predictions for the 2017 Monster Energy AMA Supercross Championship, we stumbled on some alarming math. Start with last year’s four winners—Ryan Dungey, Ken Roczen, Jason Anderson, and Eli Tomac, add in 2015 race winner Cole Seely, a flying Marvin Musquin, and promising Cooper Webb and you’re up to seven riders in the “not shocking if they win a race” category. Then add in riders who have previously won races like Trey Canard, Chad Reed, and Justin Barcia, and suddenly, quickly, you’ve named 10 riders.

Here’s how many riders have actually won races each year in supercross over the last 10 years:

Wowzers. Yeah, six winners in a season is about the max, and the average is about five. It’s doubtful we’ll see 10 winners this year, although I’d trade winning lottery tickets to see that in my lifetime. But neither scenario is likely, so this is where things get stingy. Who will eat and who will starve?

Even six winners might be stretching it, especially when you consider this: last year Anderson won the opener (which is usually a weird race) and again in Detroit (but only because Dungey was penalized). Tomac won Daytona, which is unlike any other supercross track. Outside of those three weird races, Dungey and Roczen won every other event!

Moreover, what scraps does this group leave? You could conceivably create a weekly top 10 in the results with these riders alone, but that leaves Davi Millsaps, Blake Baggett, Josh Grant, Justin Brayton, Weston Peick, Justin Bogle, Broc Tickle, and Christophe Pourcel outside of the top 10, not to mention Dean Wilson (who will be racing on a privateer Yamaha) and the Stewart brothers if they end up making it to the races with competitive bikes and programs. Man, we like simple categories like race winners, podium guys, top-five guys, top-10 guys. These are easy classifications to make until you actually write those names down on paper and realize you’re cramming eight pounds worth of riders into a four-pound bag. This second group isn’t chopped liver, either. Weston Peick will fight you for saying he’s a 14th place guy, but here’s a list:

This is where it gets tricky, but also fun. No other race this year will have so much firepower on the gate or such unpredictability within the results. Just be careful when you start making predictions, because there’s less space on the podium or top 10 than first realized. Maybe that’s a good thing?