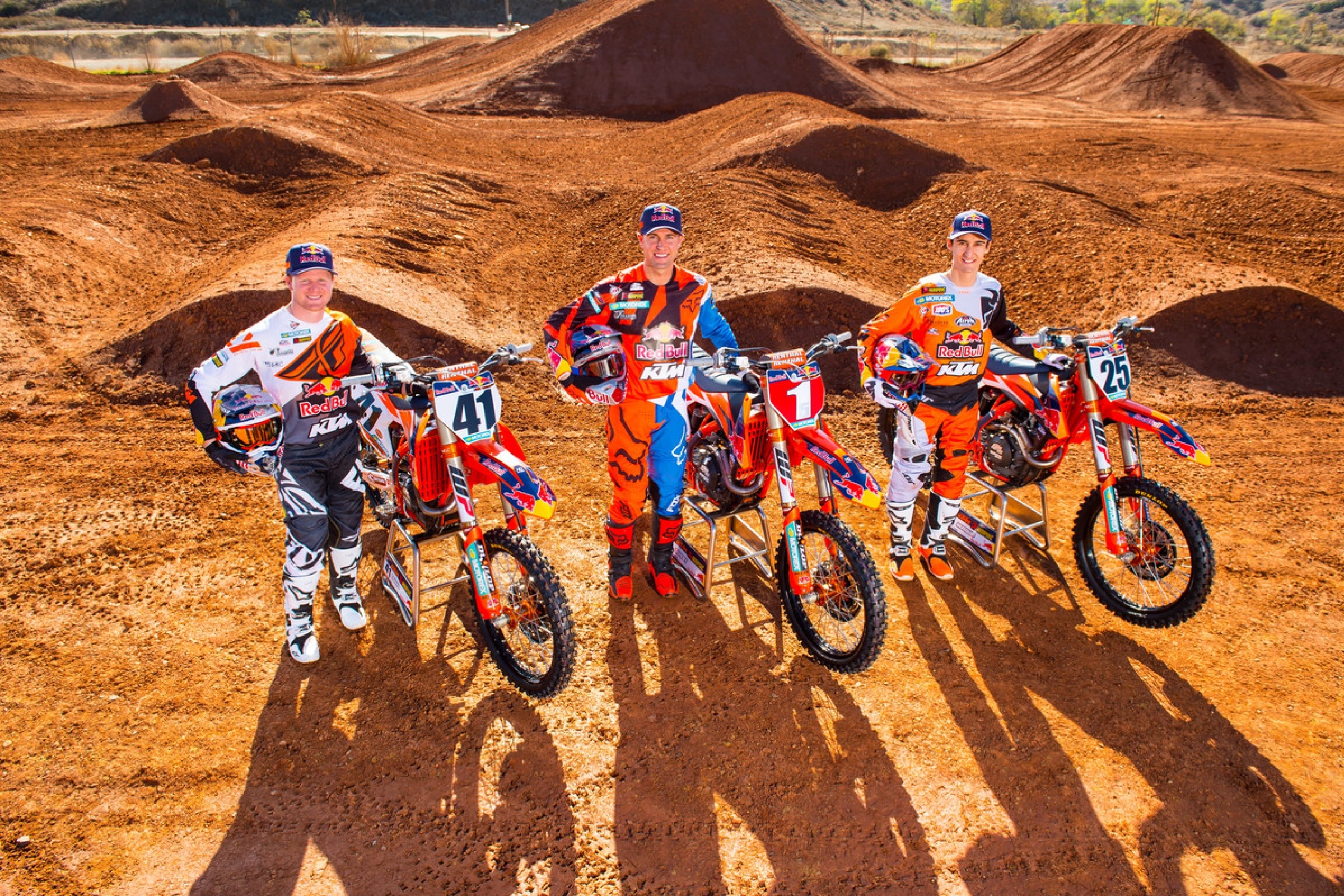 Monster Energy Supercross is back! The opening round of the 2017 season begins this Saturday at Angel Stadium in Anaheim, California. A new year also means new numbers, riders, teams, etc. It’s hard to keep it all straight.

Luckily for you, we’re here to help. Here's a handy guide for the weekend and the season. Bookmark this, print it, or just keep this window open on Saturday night and you'll feel like an expert!

Notes: Cole Seely will return for a third year with the team after signing a two-year extension this off-season.

Notes: Ryan Dungey, who has been with KTM since the 2012 season, is signed through 2017. The team has yet to announce an extension with the two-time reigning supercross champion, but if Dungey wants to continue racing, it will be with KTM.

Marvin Musquin signed a two-year deal with the team after clinching the 2015 250SX East Region Championship. This season will mark his second season in the 450SX Class.

Trey Canard signed with Red Bull KTM this off-season. After 10 years with Honda, 2017 will mark the first time in Canard’s professional career he’ll ride something other than a Honda.

Notes: Butler Brothers MX agreed to a multi-year deal this off-season with Rocky Mountain ATV/MC to serve as the title sponsor of the team. The team was formerly known as BTOSports.com-KTM.

Blake Baggett, who spent two years with Yoshimura Suzuki, signed with the team this off-season.

Davi Millsaps signed a supercross-only deal with the team in 2016. He re-signed this off-season and will race both Monster Energy Supercross and Lucas Oil Pro Motocross in 2017.

Notes: Jason Anderson has been a member of the team since turning professional in 2011. He’s signed through 2018.

Christophe Pourcel returns for his second full-time season with the team. His deal with the team is up after this year.

Notes: JGRMX has been with Yamaha since the team debuted in 2008. This off-season, they announced a switch to Suzuki for 2017 and beyond.

Justin Barcia has been with the team since moving over from Honda in 2015.

[Update: Barcia will miss "rounds" of supercross due to a wrist injury. Jake Weimer will fill-in.]

Notes: There was lots of speculation surrounding the team this off-season, but they will go racing with support from Suzuki and Yoshimura.

Broc Tickle returns for another year with the team. He’s been a member of RCH Suzuki since 2013.

After spending his entire professional (250 and 450) career with GEICO Honda, Justin Bogle has signed with RCH. It will be his second season in 450SX.

Josh Grant, filled in for the team as an injury replacement in 2015 and 2016, but this marks his first full season on the team.

Notes: Yamaha has locked up their guy for the future. Cooper Webb, the two-time 250SX West Region Champion, moves to the 450 Class in 2017 with the factory team.

Chad Reed announced a new deal this off-season. He recently said he’d like to continue racing for another few years. He’ll turn 35 in March.

Note: Tommy Hahn returns for a second year with the team.

Notes: Justin Brayton has signed with the team for 2017. Brayton spent the last two years with BTOSports.com-KTM.

Both Vince Friese and Mike Alessi will return for another season with team.

Notes: After losing Motorcycle-Superstore.com as a title sponsor of his 250 team in 2016, Albertson returns to the 450 Class with help from Suzuki, Merge Racing and FMF.

Notes: Tedder will race Anaheim 1 in the 450 Class. He is currently training with former pro Nick Wey.