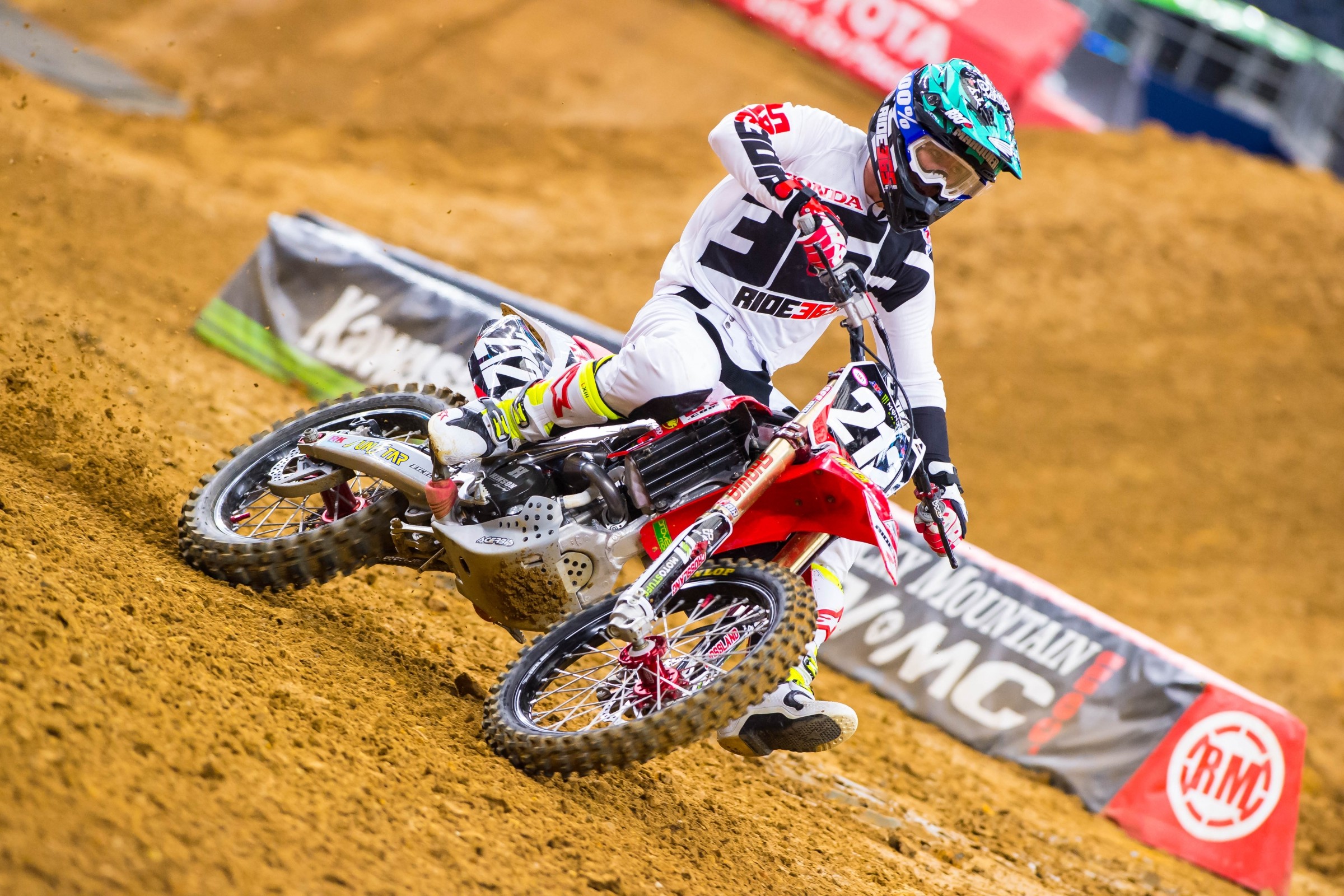 With the saga of musical chairs for rides still working through our industry, we are still reaching out to riders to see what their plans are for 2017. This week we decided to give 2016 rookie, Chase Marquier, a buzz.

Marquier spent the 2016 250SX West Region learning the pro ranks on the Ride365.com Honda team owned by Chris Crossland. Unfortunately, just as soon as Marquier started to get comfortable his deal came to an end with only three Lucas Oil Pro Motocross rounds on his contract. However, he did make four main events and his performance was good enough to earn national #99 for next season.

Since we last saw Marquier on the track he’s been busy training for 2017 with Robbie Reynard and the Oklahoma crew. Marquier wants to let us know that what we saw of him in 2016 is nothing compared to what he should show in 2017. He’s confident in his abilities, isn’t scared or star struck anymore, and is ready to make a name for himself in the ranks.

Racer X: What’s new, Chase?
Chase Marquier: Oh, nothing too much, man. I’m just riding, training, and doing what I do! I’m doing my own thing.

It’s been a little while since we spoke to you and you didn’t get to race much over the summer. Did you do anything cool?
This summer I didn’t race much because I didn’t have a ride and whatnot. I did a few races outdoors. After that I took some time off and bought a bike. I spent a lot of time at the lake with my parents and enjoyed some time off. I did some fishing and I was just living the normal life. About a month ago it was time to get back on the supercross track and I got back to it.

You’ve got one year in the books now. Were you happy with how your rookie season went?
It was pretty rough I’d say. I should have done a lot better than what I did. I think a lot of it was mental for me. I had a lot of mental blocks in supercross and I didn’t get to ride to my full potential.

You only had a regional series and three outdoor races to show your worth. That’s not much to show what you have to offer.
Not doing the outdoors hurt me. I feel like there are teams out there that are still looking for riders. I don’t know which ones, where they are at, or how to get in touch with them and that’s what scares me. I can tell you right now that this coming year will be so much better than last year.

Is that because you know what to expect now and you’re more prepared?
As a rookie I have to admit that I was pretty scared coming into racing with the big names. I know a lot of people have written me off now as a fluke. That fires me up more than anything to go out and prove to them and myself that I can be a good guy.

At what point did you get over being scared?
I think it was near the end of supercross. I was getting so bummed out with myself. During the week I would be riding so fast and I had good people telling me I had it. Then when I would get to the race I would choke. Before the Las Vegas supercross I told myself that I wasn’t going to take anything from anyone. I went out and qualified the best I ever qualified. I made it out of the heat race, but unfortunately crashed out in the main. Just to make it out of the heat race with the top-20 guys from the West felt pretty good.

Plus you got a national number out of the whole deal.
Yeah, I’d like to have it a little lower, but I’ll take it.

You could have your own “99 Problems Team”.
[Laughs] Yeah, it does look good. It’s a good clean number.

One thing that I’ve noticed about you is that you have a really strong social media presence.
I try to keep a strong presence. That’s what is helping people out these days. It’s all about how you market yourself. I’ve been trying to find something that will just blow up. Gared Steinke did the two-stroke thing and Brett Cue did the “Road to X Games” stuff and I think that stuff helps out a lot. I’m trying to find something like that, but I haven’t been able to figure it out quite yet, but I’m in the process of figuring it out.

Have you noticed an increase in followers this year?
Yeah, I mean I think a lot of it had to do with being a pro and just being at the races every weekend. I think I gained a lot of followers just from that. Amateurs aren’t looked at as much. That’s a big part of it.

Next year you’re putting together your own deal to race aren’t you?
I don’t know what I’m doing for next season yet. I’ve been talking to a few people. I don’t want to do it on my own, but if I have to I’m going to. I’ve been chasing this dream for 15 years now and I’m not going to give it up yet. If I can’t get any help I’m just going to gather up some sponsorship money, chase the 250SX West Region, and give her hell.

I’m looking at the calendar here and it says that we have two months before Anaheim 1. When do you start to put that sponsorship money together and what’s the plan?
All I know is that I’ve been training and putting my motos in. I’ve been telling myself to be ready for anything that comes my way. If something comes along I’ll be ready and if it doesn’t then I will be ready. The other day my dad, brother, and I sat down and we said it’s crunch time now. We’ve got to figure it out and for 12 hours a day you have to train like it’s your job. You’ve got to go out and find some help. You’ve got to do what you’ve got to do and if you want it bad enough you’ll find a way to get there. That’s what I’m starting to realize. I’ve never been in a position like this before. It’s tough, but I feel like I’m on the phone 10 hours a day trying to figure out something.

I’d like to do the West Region just because you can drive to all of the rounds and it’s cheaper. If I do my own thing I’ll just stay with someone and ride the tracks out there. I’ll drive to each round with my mechanic. I’m down to race anywhere, though. I will go race overseas, in Canada, anywhere. I don’t care. I just want to be racing my dirt bike.

It’s nice to hear that you aren’t giving up. The real life sucks, so if you can ride a dirt bike for a living then do it for as long as you can.
For a minute I was thinking about going to college or getting a real job. It would take a little bit of stress off, but I’ve been doing this my whole life. It’s all I know. I knew if I made the decision to go to school or get a real job that I would regret it the rest of my life.

You’re a member of a very fast group down in Oklahoma. Are you still doing the same program?
Yeah, I’m down here and I ride with Trey Canard, Chad Cook, and Austin Forkner. I’m on their schedule with Robbie Reynard telling us what to do. That’s about it. We are getting a supercross track built here at my house and one at Robbie’s. We’re going to have three supercross tracks to ride here and they will be done this week actually. There is a lot of talent out of Oklahoma from Guy Cooper, Reynard, Canard, [Justin] Bogle, and Colt [Nichols]. It’s deep.

Sx pad coming together here at the Marquier Compound! Can't wait til this baby gets finished, so thankful for the people helping make this happen. @chris_marquier #NathanCox #Dad

What have they taught you?
I think the main thing is being consistent. Riding with Trey, he doesn’t miss a moto or lap. If we are doing two 20-minute motos and he falls he gets back up and finishes. You have to put in the work and laps. It’s the same thing with Austin. That kid is flying right now and I think he’ll surprise some people in supercross. Riding with them is really big for me right now.

What is the vibe like training with everyone? Do you guys talk a lot and help one another out? Or are some guys off doing their own thing?
We all help one another out. That’s one thing that Trey has been really good to me about. He’ll pull off, watch me, and tell me what I need to do better. It can be anything from entering the whoops better to taking a turn faster. Robbie helps me out with all of that stuff also.

Robbie probably gets out there and puts it to you guys every once in a while doesn’t he?
He does actually! Not on supercross, but on the outdoor track he can throw a heater down. It’s a lot of fun riding with those guys.