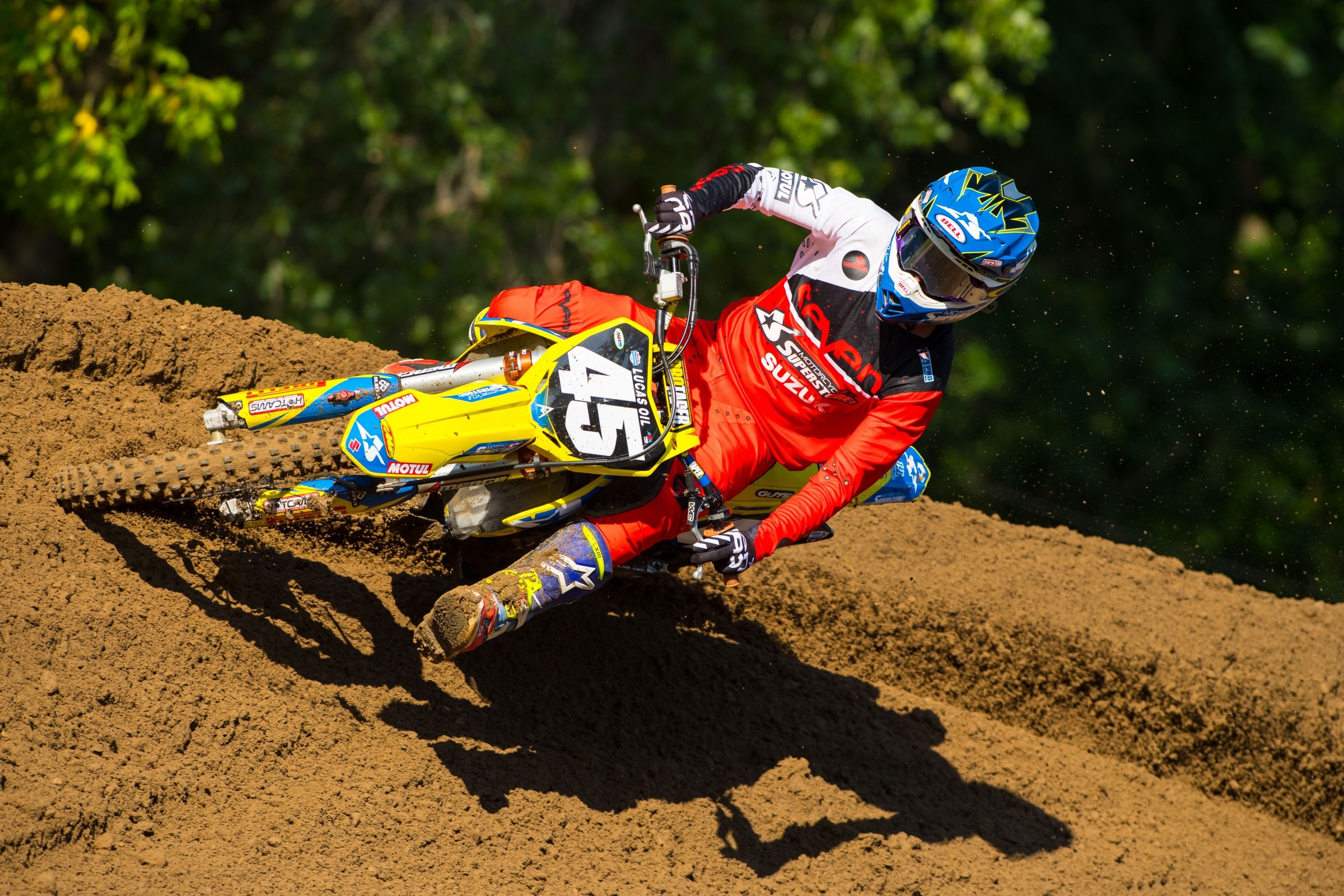 It’s November 1, 2016, and Kyle Cunningham is getting ready for his 10th Monster Energy Supercross season. It seems like just yesterday Cunningham was a rookie for Yamaha of Troy and sporting the #622, but that was almost a decade ago!

With a little more than two months remaining until Anaheim 1, the Texan is still waiting for the final pieces of the puzzle to come together. He’ll be out there racing regardless if he gets a lot of support or not. Cunningham has been in this position many times in his career and he’s not letting the stress of waiting for a ride get to him.

Last season Cunningham was a vital member of the Motorcycle Superstore Suzuki team, and that crew didn’t start building a bike until about four weeks before Anaheim. Now that team has folded after one year, but he understands how this sport works. After a family discussion they decided to going racing regardless of what is thrown at them.

Knowing that Cunningham is a great interview, we figured we’d call him up on Tuesday to get an upbeat and happy conversation. Cunningham said he feels better than ever and he doesn’t like the “veteran” motif planted on him. He’s got more to give and has changed up his program a bit to come out swinging in 2017.

Racer X: What’s up Kyle?
Kyle Cunningham: Nothing much I’m just down here in the middle of nowhere.

How was your Halloween?
It was fun. I put together a little get together for my three-year-old niece and some close family and friends. We just hung out at the house while they went trick or treating. I got to sit on the doorstep and hand out candy. I remember those days when I was younger. It was just good to be at home and spending time with the family.

I assume you’ve been eating candy all day today then?
Actually no, last night I had to turn the light off because we actually ran out of candy. Luckily no trick or treaters came after that. I couldn’t believe that we had the right amount. At one point I ran out and I had to run inside to grab the candy bowl for us.

I know you’re on a strict training regimen and boot camp is in session, but if you could eat any candy what would it be?
It’s between Sour Patch Kids and Mini Twix. I’m not a huge chocolate guy, but the little ones are just the right amount. The big ones are always stale because the gas stations leave them on the shelf forever. You’ve got to go get the fresh ones from Wally World.

Since the Motorcycle Superstore Suzuki team won’t be happening next year, where does this leave you?
Normally I think that I would be sweating it a bit more, but this year I stayed busy racing a lot of off-season races. I went out to the Texas Pro Challenge, the Soaring Eagle Casino race in Michigan, the Hahn Brothers supercross in Kansas, and the Red Bull Straight Rhythm. I’ve just been riding and staying in shape. Everything is still up in the air and I’m working on some things that haven’t fully come together yet. They are getting close though. I’m trying to get a good plan going. I’m not going to let not having a ride keep me from racing. I still want to be out there and I’m still having fun with it. I feel like I’m capable of a lot more than what I’ve been doing. My body feels good and one way or another I’ll be out there racing. I’m just not sure how right now.

Straight Rhythm was the last event we saw you at and you had to take on Josh Hill on his Alta. What did you think about racing against that bike?
Man, I was impressed with how fast it was. I hadn’t ridden much supercross before I went out there. I was a little bummed about how many mistakes I made on the track that day. I tried the quad out of the gate that Mitchell [Oldenburg], Shane [McElrath], and Jordon [Smith] were doing. I couldn’t get it from that line all day. I just couldn’t get the drive. I tried it and ended up coming up short and something felt a little finicky after that. You can’t take anything away from Josh. He’s a great rider and he’s won races in the past. It’s no different than watching Ricky Carmichael or Kevin Windham out there spinning laps even after they’ve retired. They are all capable of putting up results. I don’t regret going and I had a good time with it. Hopefully we will be able to make it out there next year.

It was funny to line up next to Josh again because we raced one another since we were kids. I was really impressed with the way he was riding. He’s an animal on a motorcycle. I think with fewer mistakes I would have been a little happier. It is what it is. It was another off-season race and I had fun with it.

"I’ve been doing this since I was seven years old and I’m not going to let one thing get me down."

Was it weird just hearing your bike?
[Laughs] I think the only time I heard his bike was when he over jumped the finish line. You could hear the thing clank because he didn’t have any noise.

What would your ideal schedule look like for 2017 look like as far as classes are concerned?
I’d like to line up on the 250 class on the West Coast, run some 450SX rounds, and then ride the 450 outdoors. We’ll see how everything pans out. I’m talking to a few people and if I see an opportunity with good equipment then hopefully something like that will work out.

The worst-case scenario is that you will be out there doing it on your own, right? I’ve talked to quite a few people who have said they’ll have to quit and it’s like you’ve come this far why not give it one last go?
I’ve been doing this a long time. In 2007 I raced outdoors out of a pickup truck with minimal help and finished 7th overall that season. I’ve been in this same boat many times. I was in it in 2008, 2009, and in 2014 I did the outdoors on my own with minimal help. I’ve been there and done it. I have a lot more left in the tank and I have a lot more that I want to do. I don’t care how old I get or what happens I’ll always want to ride a motorcycle. I still enjoy being at the races and I’m going to figure out a way to be there no matter what.

You guys gave it everything you had this year by building a team from scratch. Overall how did you think it went looking back on it now?
I was happy with some of my results this year. I went back to the drawing board and worked on my technique. I was trying to ride the motorcycle a bit better and I think it worked out. Last year I walked into the shop with a month and a half left before the first race. Those guys built a bike in four and a half weeks and as the year went on it got better and better.

You don’t necessarily like the term “veteran” and I don’t mean any disrespect when I call you that. However, you’ve got kids who are quitting after a season or two these days. It’s cool to see riders like yourself having longevity in this sport.
What was Michael Phelps this year, 31? He was at his best this year. It doesn’t really bother me. I know I’ve been around the sport for a long time. This is what I love to do. I’ve had a lot of good results and my fair share of bad results. All you can do is learn from it. This year I put up some good results and it was the first time that the Suzuki 250 had been out there in a while. Jimmy [Albertson] and all of the guys did a great job with the team and it was good to be a part of it. I still feel like my results are still there. I have a few minor fixes here and there, but I feel like I’m still riding my best. Personally I feel like I have a lot in me and that’s why the drive is still in me to go racing. I’ve been doing this since I was seven years old and I’m not going to let one thing get me down. I need to just go out, be prepared, and show what I can do.

Looking back through your results, you’ve finished in the top-10 of the standings more often than not. What is it that makes you have a standout year rather than one that you struggle through?
Through 2014, 2015, and 2016 I think I’ve lacked in testing time. It’s all about being ready and having that opportunity. Everything has to click. One thing that I’ve made sure of this off-season is that I’ve stayed on the bike. There were some things that I worked on this year that started to pay off halfway through the outdoor season. I can’t even tell you how many things we changed from Muddy Creek to Red Bud. Everything got better as the summer wore on. One thing that has gotten me is getting out of the gate. It’s not an issue of charging from the back. That was one of the main reasons that I did these off-season races is to get more gate time. I’m excited for whatever 2017 brings my way.