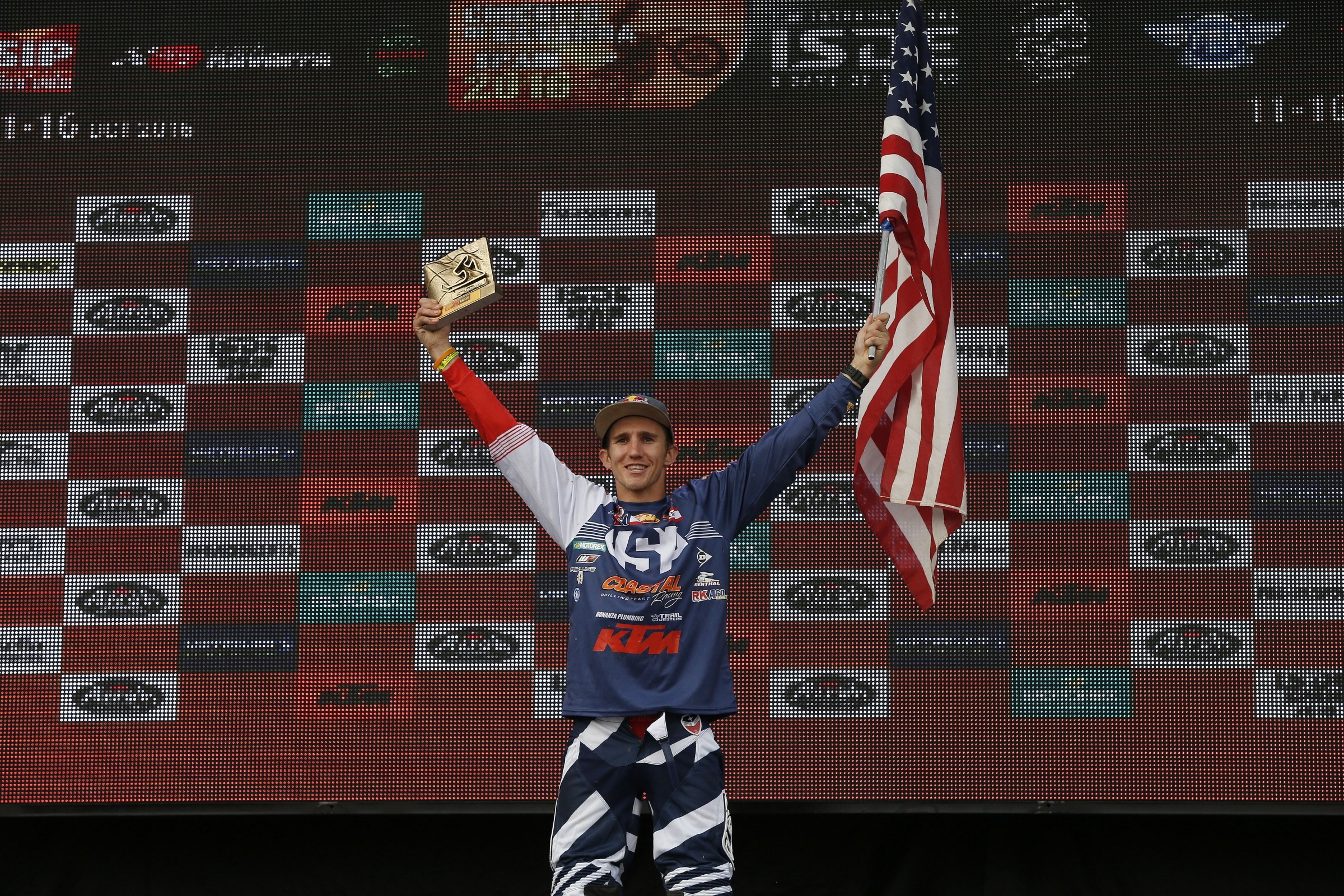 Red Bull KTM off-road racer, Taylor Robert, has had a crazy year. His primary job this year was to compete in Europe’s Enduro World Championship, and ended his up and down rookie season overseas with a win in France. He sprinkled in an EnduroCross podium, a Hare and Hound win here in the U.S., and a big video with Red Bull that launched yesterday. The real goal, though, was for Team USA to get its first-ever International Six-Days Enduro win. Robert and his teammates Kailub Russell, Thad DuVall, and Layne Michael got it done, with Robert leading the way as the individual overall winner of the race.

After 16 international flights this year, Robert is ready for a rest. We gave him a call this week to see what making some history feels like.

Racer X: It sounds awesome to win this race as an individual, but I know the real goal was to finally win the event as a team. What has this experience been like?
Taylor Robert: It’s been crazy. I mean, you think about how the United States can be, at times, dominant in just about every sport, and then it took us 91 times to get this done, it feels really good. We’ve been close a few times now, I’ve been on the team twice when we got second. Both times we had something happen, and we were like “Man, we should have gotten it done.” So I’m really happy it finally worked out!

Was there pressure because you knew this could be the year?
Yeah there was definitely pressure. The last four years, we’ve gone there to win it. This year we led every day—obviously we’ve never done that before. I knew what it would take to do it, and I felt we had the other teams covered. But it’s enduro racing, and crazy stuff happens. We had some close calls where we weren’t sure we were going to make it, and that’s what makes you nervous.

Well we can start with Ryan Sipes getting hurt literally the day before you were all supposed to fly to Spain. You weren’t at the GNCC where he was injured—so how did you even find out about it?
It was really weird. When I’m not racing but there’s a GNCC going on, I usually follow the live timing. So I was watching that and I never saw Ryan’s name all day. So I didn’t know what was going on, but I thought maybe he decided not to race to save himself for Six-Days. Then I get a text from Antti [Kallonen, ISDE and KTM factory off-road team manager] saying “Ryan broke his arm. Looking for replacements. What are your thoughts.” And I was like “Ummmm, ummmm, ummm.” I didn’t know what to say! Antti pretty much took care of it but I did throw in some ideas. I didn’t know what the logistics would be. Ryan rides a Husky, so did we need to find someone that could ride his bike? I didn’t know how it would all work. We ended up getting Layne [Michael]. Maybe he wasn’t the fastest rider in the world at that time—he wasn’t even planning on racing the event, and he has to replace Ryan, who won the event last year—but obviously, he rode very well and did what he had to do. No complaints and no regrets about putting Layne on the team!

Through all of that drama, and with losing Sipes, did you think you had lost the event?
Well, my highest hopes were definitely gone, but it wasn’t like I ever thought we couldn’t win. I just knew it would be that much tougher than I originally thought. I felt we had the strongest team coming in, but losing one of our strongest riders, that hurt. But we had also done a training camp together earlier in the year, and I knew Kailub [Russell], Thad [DuVall], and myself were really on it. So I knew we still had a chance.

You raced in Europe this year. How much did that experience help? I know the ISDE format is similar to what you did in World Enduro.
Yeah my races over in Europe this year definitely helped a lot. We’ve all gotten used to that format pretty well from racing Six-Days every year, but I was that much more comfortable because I had done it all year. Where I really think my experience in Europe helped was when it started to rain on Day 4. It got really nasty and slippery, and I was confident in that stuff. I’m from Arizona, so I obviously don’t get much mud practice. This year in Europe, it rained in six of the eight rounds that we did, so that helped my confidence. When it rained, I was ready to take it on.

"Once we found out we won, it was just crazy. That feeling you get when you see something spectacular, your whole body just gets chills."

The team has improved tremendously at this event over about 10 years now, but I’m sure you yourself have seen tremendous improvement during the time that you have been going. Can you point to any reason why this has improved so much?
I think a big part of it is we have so many guys who want to go over there and win. Even the first year I did it, 2010, I felt like even Kurt [Caselli], he was the best guy on our team, and even he wasn’t going over there expecting us to win. It was more about doing your best and feeling good about that. We’re putting in a lot of effort into this race now, and Kailub, Ryan, and myself have won tests. We know we have the speed, and we eventually got to the point where we knew we could win the thing. In some years, you’d have a few guys who thought they could do well, and a few other guys who maybe only had the goal of just finishing. The last few years, when we’ve gone over there, we mean business.

I know you hold training camps together, and it seems like there’s solid camaraderie on the team.
Yeah, we really do get along well. It’s hard when you want to do well for yourself individually but you have to race as a team, but I think we do a good job with that. Kailub and I, we’re competitive in our own way with each other, we were battling really close on the first few days. You have to kind of put that aside. We can’t push so hard just to beat each other that one of us just wads it up and ruins it for the whole team!

I think it helps that we’ve known each other for awhile. Thad and I have been on the team together since 2012, and in 2013 we added Kailub. Ryan was there in 2013 on a club team. We’re comfortable with each other and we know how we all work. We share a room together at the races, even. It’s really pretty cool.

You mentioned the individual thing. You were leading the race overall as an individual, but you don’t want to crash trying to win that and blow it for the team. How did you balance it?
That one was tricky! I wanted to win the individual, and my theory was if I won that, it’s definitely going to benefit the team, too. But once you get into that position, it gets hard. I led from Day 2 on, and I was feeling pretty good. But on Day 5 my lead got cut in half, and it was down to just 12 seconds going into the final day. Then I was super nervous. I had to ride that fine line that you were talking about. All we had to do was do a motocross race, and for the team, all I had to do was cruise and we had it. But for the individual, I had to keep that 12-second lead on the guy behind me! The motocross track was super sketchy. They started us on gravel, then a right-hand turn on asphalt, then two more asphalt turns before we went onto a rally car track. It was so sketchy! I was just thinking, Man, there are so many ways this can go wrong! If I go down on asphalt, especially with that right-hand turn, 12 seconds could be gone in a hurry. The smart thing for the team would be to let everyone to go off the start and just stay out of trouble, but for me, I wanted to get the holeshot. Plus, riding in E2, I was on a 350 against a lot of 450s, so I was worried I would get a bad start. But luckily I pulled a second-place start, then I made a pass and won my moto.

What made it even trickier, though, they guy I was battling for the overall was in a separate class, so he raced his moto after me. So I felt like I gave it everything I had, but I knew there was still a chance he could just throw down some heater and still beat me! It was a really stressful day! [Laughs]

When you guys did finally win it, what was that like?
Once we found out we won, it was just crazy. That feeling you get when you see something spectacular, your whole body just gets chills. We definitely had that going on. I went up to my dad, and he was crying, I went up to Antti and he was crying. It was definitely the biggest moment I’ve had in my career. I’ve won an X Games Gold Medal, which is a huge accomplishment, but this felt so much bigger. And when I came home, there was so much support. I got off the plane and the news truck was there from the local news station. It was just kind of crazy. Just so many texts, emails, Facebook posts, so many people saying how proud they were. It was surreal.

And you got to go to the GNCC this weekend and celebrate with your teammates, and the trophy?
Yeah so over the weekend at the GNCC in Indiana they had sort of the unveiling of the trophy. It had never been on U.S. soil. So that was pretty cool. I didn’t know what to expect, but it was pretty sweet. The AMA had a band come out, we had an awards banquet, they did some fund raising for Breast Cancer, and then they brought out the trophy, and everyone was super stoked on it. There were American flags everywhere. It was pretty amazing.

What about this Donner Party video that launched yesterday? I heard you got hurt you went so big!
Yeah I actually got hurt doing that video! I did this big rock drop off and I crashed hard on the landing, and I smashed my hand between the rock and the bars. But I finished shooting the video, I just had to make sure I landed on my palm when we were doing some of those drop offs. It was a huge risk to do that video while I was right in the middle of some big races, but you don’t get the chance to do that very often. I think it came out pretty cool, and I hope everyone likes it because we put a lot of work into it.