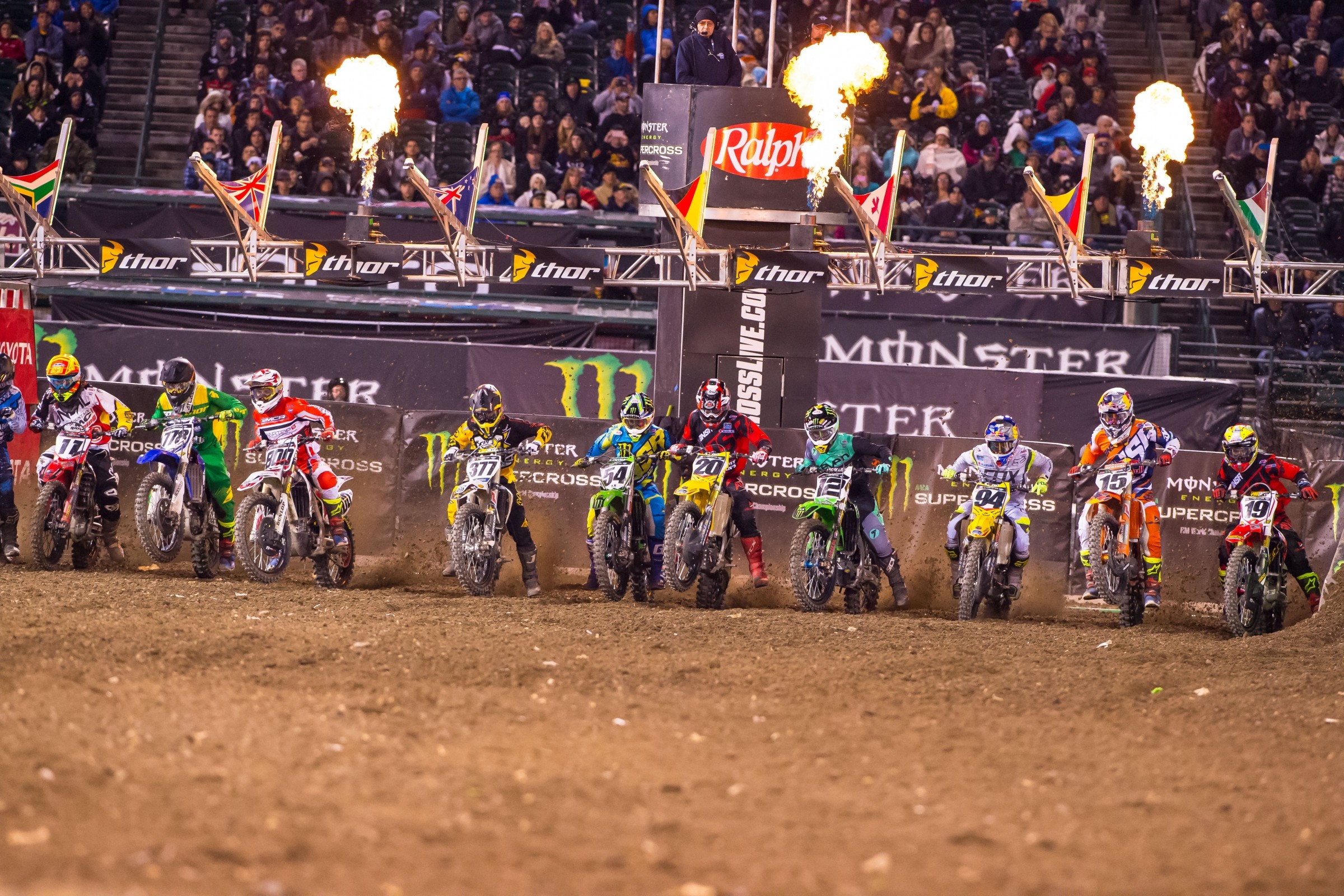 We posted a week ago about the exceptional—perhaps all-time—level of talent stuck on the 450SX sidelines without rides for 2017. At least so far. We believe Justin Bogle and Broc Tickle will end up on RCH Suzuki, but that hasn’t been made official yet, Justin Brayton might have a MotoConcepts ride but that’s not official, and Dean Wilson, Malcolm and James Stewart, Wil Hahn, Jake Weimer, and others aren’t linked to anything at the moment. These riders might all end up with rides by January, but it’s still rare air to have this kind of talent playing the waiting game.

In this situation, the conversation shifts quickly to the bigger picture. It’s not only about who doesn’t have a ride, but why. Is there a fundamental problem with the racing industry that’s leaving these riders out of work? Hard to believe there isn’t—and I’ve documented “our” problems several times, like last week and in a longer, multi-part piece a year ago (Part 1,  part 2,  and part 3)

It’s the perfect storm, and to avoid the risk of yet another column on it, I will try to sum it up by saying forces of economics, bike prices, injury risk, closing tracks, lost land, increased emphasis on training facilities and less on local racing are all messing with the the sport economically from the inside out. That’s not everything, though. It’s tricky to make a direct connection between professional race team budgets and what’s happening at your local tracks and shops, because outside sponsorship can supplement a racing budget in ways unrelated to the motocross industry. You also have people and companies willing to pay for racing in ways that doesn't even make financial sense. Further, when I was in college, I was told economics is the hardest subject for humans to master, and some of the smartest minds in the history of the world have tried and failed to figure it out. I’m far from them, so I’m not going to try.

I can do one little test, though. If we get back to the smaller picture, we can ask this: Are there fewer good rides right now, or just more good riders?

At the start of the Lucas Oil Pro Motocross Championship this summer, I wrote about the #deepfield of 21 riders with factory 450s on the starting line. That is, literally, the highest number of well-supported riders ever at the opener.

We can look at this in another way. Since 2013, we’ve been posting SX/MX team guides at the start of the season, so let’s dig those up and see what has changed. Here’s a link to 2013 or you can just read the comparisons below:

Honda HRC is the same size as 2013 (two riders then—Justin Barcia and Trey Canard, and now with Cole Seely and Ken Roczen)

TwoTwo Motorsports (on Hondas) had Chad Reed, that team is gone

Chaparral Honda had Andrew Short, that team is gone.

There was supposed to be another team with factory Yamaha support in 2013, Velocity 3 Racing, but it quickly folded so that doesn't really count.

Back in 2013, Yoshimura Suzuki had James Stewart, and RCH had Broc Tickle and Josh Hill.  Yoshimura Suzuki is no more, but we believe RCH will be back with a two-man lineup, and now JGR has moved to the Suzuki camp with two riders. So that’s four Suzuki riders instead of three in ’13.

This wasn’t even a brand racing supercross back then, but the team, Rockstar Energy Racing, was around, with Davi Millsaps doing huge things on a Suzuki 450. Now they have two 450 riders, Jason Anderson, and Christophe Pourcel. So when you consider this a team instead of a brand, you have:

Overall, if you look at this list, we’ve lost three Honda 450 rides, but Red Bull KTM gained two, and Husqvarna (Rockstar) and Suzuki each gained one. That means there’s actually one more ride for 2017 than there was in 2013. Now, math gets fuzzy depending on how you classify solid support teams—like the old N-Fab TiLube Yamaha team from 2013 (two-rider team, now gone), or SmarTop MotoConcepts, which, if it signs Brayton, will have expanded from one 450SX rider in 2013 to three in 2017. Count all the manifestations between those teams (N-Fab/TiLube is no more, but MCR has expanded) and you’ve got a push, again.

Maybe a better way to look at this, then, is by counting the riders instead of the teams.

Missing from 2017 completely—due to retirement, basically, are Villopoto, Short, Windham, Matt Lemoine, and Bobby Kiniry. Also Michael Byrne and Josh Hill (BTOSports.com KTM and RCH Suzuki) had rides in 2013, but missed A1. They're retired now. In addition, Matt Goerke no longer has a U.S. ride. That's eight  slots that have opened up.

Now let’s look at last year’s A1 main event lineup, which, by the way included 22 riders due to new rules. To cut it to 20 and make things even with 2013, let’s just remove Lawson Bopping, who was a guest rider from Australia, and Kyle Chisholm, who was racing in both 2013 and 2016.

Now, out of the remaining 20, the following talent has been added to 450SX since 2013: Seely, Anderson, Bogle, Musquin, Roczen, Pourcel, Wil Hahn and also Tommy Hahn, who was retired in 2013 but is back now. That’s eight guys added to the class. Also, Blake Baggett wasn’t at A1 last year due to injury, but he had a slot on Yoshimura Suzuki, so that’s nine. Also, Cooper Webb will be joining the fray this year. That’s 10 additions to the 450 ranks. But only eight riders have left the scene since since 2013: Villopoto, Short, Windham, Bryne, Lemoine, Kiniry, Hill and Goerke. Plus, no disrespect meant, but look at the difference in talent—it’s not only only more guys, it’s really, really, good guys coming in. Think of this list again: we gained podium potential in Seely, Anderson, Bogle, Musquin, Roczen, Pourcel. We lost it with Villopoto, Short, and Windham.

The 2016 opener featured an incredible 17 full-factory rides, plus Tommy Hahn (CycleTrader/Rock River), Alessi (MCR), and Weimer (Team Tedder) on what could be considered good teams. That’s 20 spots right there, just about the most ever.

Ever, you say? What about the glory days of two-strokes and big money pumping through the economy?

Anaheim 1, 2005, was an incredible event during an incredible time for this sport. It’s the most-hyped, most-anticipated season opener ever and if you don’t agree I might have to come through this computer screen. Here are the results:

There are 12 full-factory rides there--and, Matthes Alert!--Tim Ferry was also on Team Yamaha that year but was hurt and DNQed the main that night. So that's 13 factory riders, four less than Anahiem 1, 2016. I will say that probably the majority of the salaries throughout the field were better in 2005. Stupid money was being thrown around back then, which is why teams and riders had lights installed at the test tracks so they could ride during the actual time of the races, and why the real ballers were flying private every weekend. I’m not saying the sport is healthier, stronger, or richer than it was in 2005—because it isn’t. But as for the number of rides up for grabs, we’ve actually seen an expansion.

From a sheer numbers perspective, the real issue isn’t a historically low number of rides available, but the historically high number of good riders on the market. As to why that happened, we can look at a few things, and I believe a big one is the push from both ends of the age spectrum. A lot of veteran riders have been hanging in there later. There was a time when age 30 was dirty in this game, but now riders are performing at a peak level well past their mid-20s, and 30 is kind of an inconsequential bump in the road. Meanwhile, teams are digging deep into the amateur ranks, hiring young talent to long-term deals, building massive 250 teams, and graduating more talent through. Think about that list of race or championship-winning 250 riders that have come to the 450 class recently: Roczen, Musquin, Seely, Anderson, Bogle, Hahn, Pourcel, Wilson, Baggett. Then think of Malcolm Stewart, who is trying to get a 450 ride, and also Jeremy Martin, who also tried but couldn’t find an opening. Then, think of who has retired: Villopoto, Windham, Short. Few riders retiring, lots of new riders trying to move in.

One last thing. Let’s build a hypothetical Anaheim 1 lineup with every dude who either has a ride, or is on the short list of riders who should have one:

That’s way more guys than can even fit into the main event. The number of teams and slots isn’t shrinking. It’s just not growing enough to keep pace.