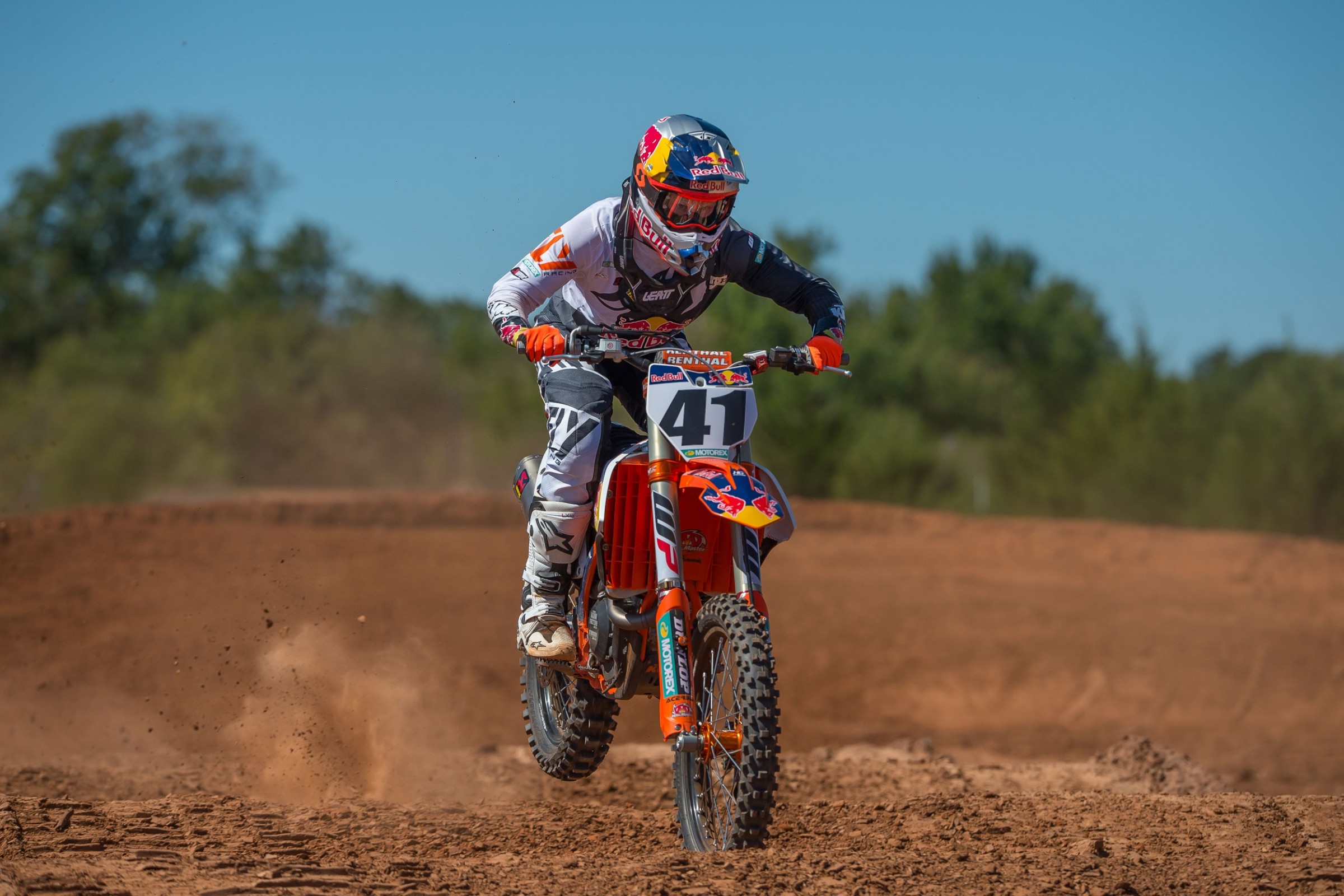 Jason Thomas: At this point, change is good for Canard. The last couple seasons have been rough and tumble, seeing him watch more events than actual racing. I think the move itself is lateral, both Honda HRC and Red Bull KTM are great programs and have great equipment. The change of scenery and a fresh start could be the difference he needs. Excitement and new hope can sometimes be the most powerful of motivators.

Steve Matthes: It's going to be weird to see the #41 on a KTM, that's for sure. I think that near the end of Trey's run at Honda it looked like both sides wanted a change. Sometimes, change is good. He'd been there a long time as the number one rider and he delivered a few wins and lots of podiums. But according to our own Aaron Hansel, Canard raced in just 97 races out of 174 for Honda—that’s 55 percent. Injuries struck Trey often and I'm sure Honda and he were frustrated with each other (some of Canard's crashes that caused injuries weren't of his doing) and so here we are. He's not the number one guy at KTM, heck he may not even be number two over there so with no pressure, some renewed enthusiasm from Trey, and a new mechanic, it can all add up to some reinvigorated rides. I like it for Trey, I like that KTM is investing in three big-time 450 riders and hopefully we see some of that pure, raw speed from the #41 that in my opinion was missing from Canard last year.

Jason Weigandt: Trey really is the ultimate dark horse. Because of the time missed, and then so many other races where he’s working his way back from injuries, he’s not always a guaranteed race winner. But he is more than capable, at times, besting anyone out there. His brief run at the end of the 2014 Lucas Oil Pro Motocross Championship, including a flurry of moto wins and a 1-1 at the season finale, shows where his ceiling is. Very, very few riders have that ceiling.

Yeah the injuries are a thing but I’m more interested in his starts. Trey was never known as a bad starter, but just when he was heating up there in ’15, he got into this start slump that just hasn’t let up. This fresh start might jump start the starts. This could be good. And yeah, I agree with Matthes, I love that Red Bull KTM is running with three full-time 450 guys, and I wish every other team did so. By the way, this was Dean Wilson’s spot for the last two years. Will be interesting to see who ends up doing better—providing Wilson actually gets a ride somewhere else.

Thomas: Yes, yes, and maybe. The natural progression for Yamaha is to move their elite level riders to the Yamalube/Star Racing Yamaha team. That's where the most resources reside and it gives the rider his best chance of winning. For Colt Nichols, that time is now.

As for Alex Martin, things were not peachy-keen over at his former team so he was looking for a change. Both programs are good so I think the equipment is a wash but when the environment and relationship is toxic between team and rider, it's time to go. This is a good move for that reason alone.

Jordon Smith is in a similar spot. For whatever reason, things deteriorated between him and GEICO Honda. If he isn't happy, go somewhere that changes your outlook. All of these elite level teams have great bikes and plenty of budget; it's more about finding the right situation to let the best results unfold.

Matthes: Colt Nichols’ rides in supercross were kind of forgotten when he struggled outdoors but I'm here to remind you that they were pretty good. Lots of speed, he ripped through the pack a bunch and he was very impressive. Good signing by Star as he'll get a slightly better bike and won’t really have an adjustment period. He's got to work on his outdoor skills but this was his first year riding Lucas Oil Pro Motocross so I imagine he'll get better.

The A-Mart to Troy Lee Designs KTM thing is great for him, more money than he got at Star and a two-year deal, so personally that's great deal. Here's the thing, though: Martin's rise has coincided with the all-new backwards motor Yamaha YZ250F that we've seen look so good these last few years. The TLD KTM's appear to be fine bikes but in my opinion, there's nothing that can touch the motor of the Yamahas. There's no doubt that Alex has matured as a rider and there aren't too many dudes who work harder off the bike than him. He's going to be good, there's no doubt about it. But does he win nationals and motos on a KTM? I'm not so sure, that's how important the bike is in that 250 class.

Jordon Smith is fast as crap. But he just hasn't put it together yet and GEICO seemed to be a good place for him, until it wasn't. I'm not sure what happened there but both sides seemed to grow tired of each other. I know GEICO wanted Jordon to make some changes to his program and I know Jordon wanted to make his bike better so this switch is probably for the best. Will Tyler Keefe and Tyla Rattray be able to unlock Smith's potential and get him into the top five most times? We'll see.

Weigandt: Pressure suddenly ratchets up for Nichols and really everyone on the Star program, because losing Cooper Webb, and Jeremy and Alex Martin leaves some big shoes to fill. Nichols is still a bit of an unknown because he missed most of 2015 with a torn ACL, and was only so-so outdoors. So this whole deal is hinged by his great supercross rides this winter, but you’re still only talking about a handful of races. That would be fine if he had some time to develop, but suddenly everyone on Star is going to have to win and podium quickly to make up for all that lost talent.

I agree with Matthes on A-Mart, the Star program was so solid last year for him with Gareth Swanepoel doing the training and that super-fast YZ250F. TLD isn’t chopped liver—this is a factory KTM team, people—but Star’s season last year was just ridiculous, and Alex was a big part of it. I’m curious to see if he can stay the same with this move.

By the way, does anyone remember Jordon Smith finished second in the first moto of the year at Hangtown? Probably not, but it shows what this guy can do. From what I heard, Smith had a few years and good money on the table with GEICO Honda when the two sides decided to split. Hard to walk away from those deals, but it looks like Smith is betting on himself to make it happen with a new team. Really, the pressure is on TLD now. Last year was the first season as the sole KTM 250 team and it was okay, but not great, and we know KTM expects to win everywhere these days. Smith is not the only one over there that has to get it done in 2017.

Thomas: I expect Justin Bogle and Broc Tickle to end up at RCH Suzuki so take those two off the market. I think Weston Peick is a done deal to stay with JGR (on Suzukis). Justin Brayton seems close to a deal with Honda on a private team, giving him good equipment. The biggest question mark I have is Dean Wilson. I have no clue where he ends up as of now. I am sure his agent, Tony Gardea, is spending lots of time on the phone these days. Jake Weimer is also available and if he doesn't end up at Team Tedder again, I see him as a fill-in rider for 2017.

Matthes: As far as the other 450 guys ... well, they're still out there! Nothing much has changed on that end other than Weege thinks Brayton is headed to Smartop/ MotoConcepts Racing which is something I wrote as possible. Tickle and Bogle, we all think they're going to RCH as soon as that team gets its funding straight. That leaves Wilson, Weimer and the Stewarts (that could be the name of a new boy band). I think Malcom Stewart and GEICO are going to find a way to make a 450 deal happen, even if it's on 2016 stuff. As for James, I have no idea other than I think he's going to have to start his own team. Wilson could go to Team Tedder, right? Weimer ... I think he's holding out for an RCH testing/fill-in role. It's pretty sad really, I can't believe riders of this caliber can't get something, anything—and we're not even talking about Kyle Chisholm either. (Insert sad face emoji.)

Weigandt: I’ve said before that I think most of these deals will somehow get filled in via spots that don’t exist yet—such as Brayton securing a Honda as an addition to a team that’s already out there, like MotoConcepts. I still wish these dudes didn’t have to sweat like this, though, it’s a bad look for the sport all around.

The one that stuns me is the Stewarts still not being linked to anything solid. In fact, a lot of the rumors I had heard about where James could land, or how he could make a deal happen, seem to have closed. Now, James is always his own unique circumstance, but Mookie has to be the last 250SX champion in ages to not easily have gotten a 450 ride. Plus, everyone knows he can ride a 450! Just a tough numbers game right now and Honda supply problems for that new 450 absolutely don’t help. Of course GEICO Honda wants to keep him there but they just might not be able to build the bike to make it happen. Clock is ticking on this one!