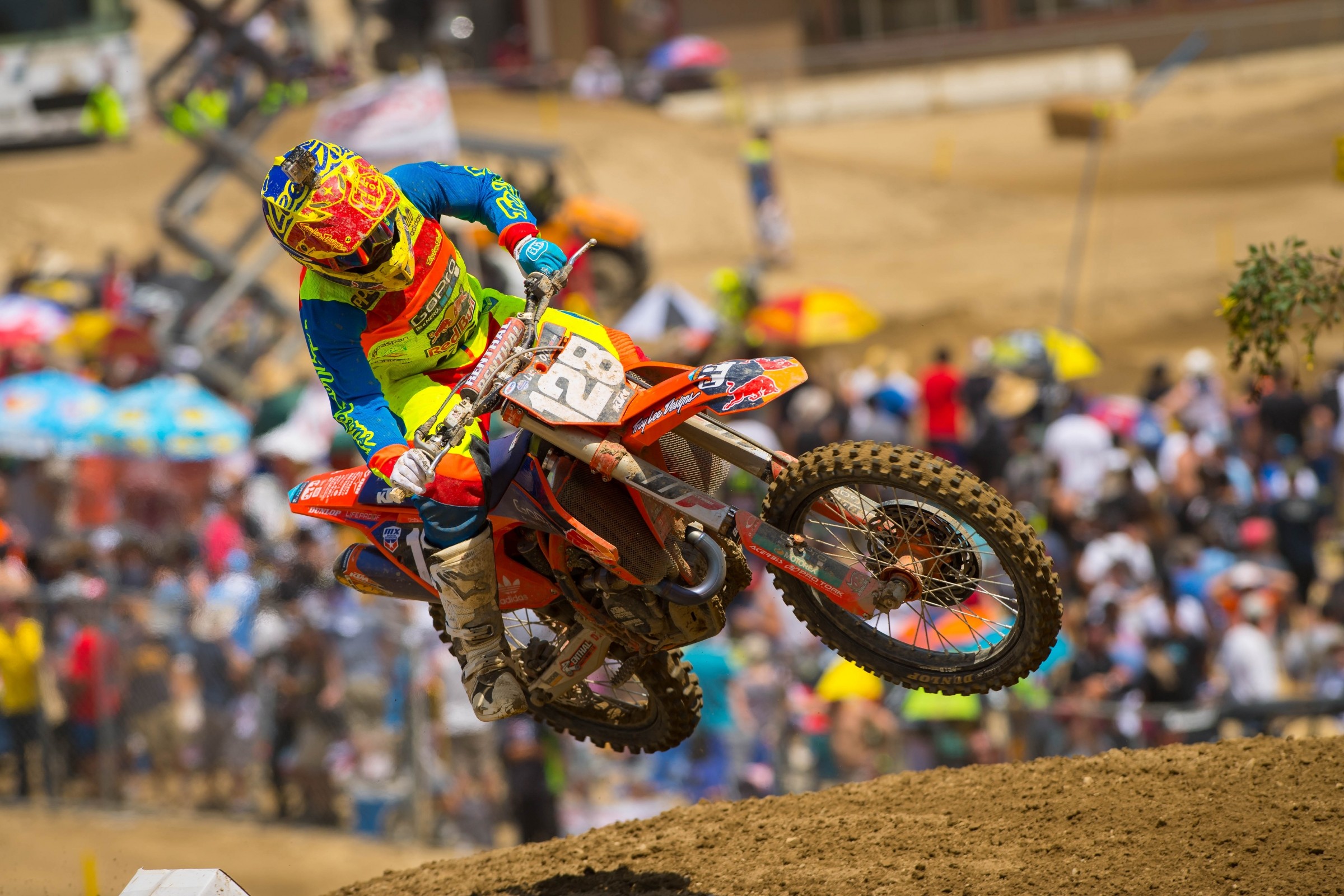 In the case of Alex Frye’s professional motocross career, his future is up in the air. Like many others in the sport, his first years as a pro were riddled with injuries. The time away from the track has ultimately hurt his chances to get on a factory team for next season.

“It’s crazy how fast it happens,” Frye told us earlier this week. “If you aren’t at the track anymore the sport moves on from you pretty fast.”

Frye saw just how fast the sport can move when he learned he wouldn’t be re-signed by the Troy Lee Designs/Red Bull KTM team for the 2017 season prior to the Unadilla National. Since then, no other teams have approached him about a ride which leaves him with nothing to do but reflect on the highs and lows of his career so far.

Frye was set to make his pro debut at Hangtown in 2015 but was recovering from some wounds sustained during his amateur career. He then planned to turn pro after Loretta’s but instead decided to move his debut up to the Muddy Creek National to take advantage of a contract with the now defunct Orange Brigade KTM team. The very next weekend at High Point, he ended up dislocating his wrist, forcing him to sit out until the last three races of the summer. He struggled to get back up to speed and only scored a couple of points.

After the 2015 season, it was announced that the Orange Brigade team would be dissolved and Frye would join the TLD KTM team for 2016.

Even though he feels like his broken wrist prevented him from showing his true potential, the 2016 Monster Energy Supercross season did allow the rookie to show some of his worth in the 250SX East Region. He grabbed Rookie of the Year honors with three top tens and a career high fourth in Toronto. While he was a big name in the amateur ranks, that doesn’t mean he was riding supercross tracks for years preparing for his pro debut. We talked to him about it then.

“Supercross was totally different,” he told us earlier this year. “It was just the struggle of putting laps together, hitting every obstacle the right way, hitting the whoops consistently. It really took all the way until December to really get going good. Originally I was supposed to race West Coast but when [Shane] McElrath got hurt that put me on the East. It was the last three weeks before Atlanta that I really made a big improvement and got better and put in the motos and the consistency and things like that. So it’s been a long road.”

When the Lucas Oil Pro Motocross Championship came around Frye had his best outdoor showings at the first two rounds. At the season opener at Hangtown he grabbed a 10th in the first moto. Unfortunately, on the Tuesday following Glen Helen, he crashed and tore his ACL—his season was finished.

The big problem for Frye this offseason is if he doesn’t get on a team for the 2017 season, he simply won’t be able to afford to race. “I don’t come from a lot of money, so my parents and I can’t afford a professional motocross career,” he said. “My career is in the hands of someone else now and whether or not they want to see it continue.”

With that being said, he isn’t asking for people to feel bad for him. He knows that nothing is guaranteed in the sport and everyone has to play the cards they’re dealt. Either he finds a job racing in the sport, or he’ll be forced to quit.

“Everybody is trying to get what they can from this small community and you have to contest for the top five or three if you really want to be guaranteed something for next year,” he said.

Frye moved back home to Maryland after he learned the team wouldn’t be bringing him back. Since then he has had a lot of time to reflect on his career as well as what direction his life is heading in. Frye has been working hard to earn his final high school credits at the College of Southern Maryland and plans to enroll in college this winter. “I’ve just been transitioning into normal life,” he said. “I’m keeping my options open, but I also want to make sure I take care of myself too.”

Although he’s still undecided on what school he wants to attend, he’s interested in science and medical fields.

He’s still rehabbing his ACL and it will be a month before he can even think about getting on a bike again. He’s hungry to race next season, given the chance, and said that he’s going to do whatever it takes to make sure that he can be ready if someone calls to offer a ride. If that doesn’t happen then he has a plan to further his education, which will take him down a different path in life.