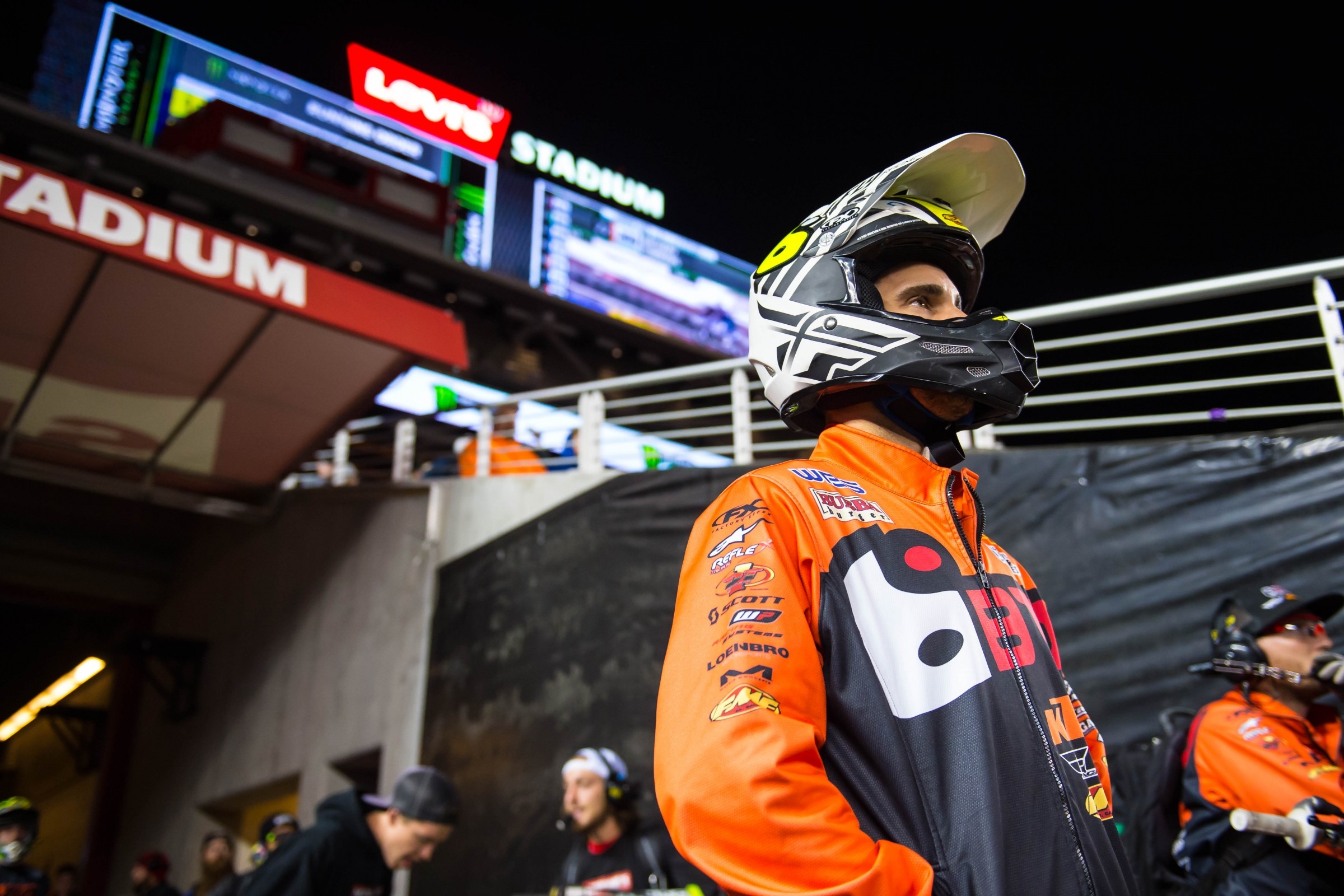 It’s really tough to be a great 450 rider right now. While there are 250 riders with great bikes that struggle to get into the top ten making six figures, there are some prime 450 riders that would do unspeakable things to get expenses covered and some gear money right now.

Yoshimura Suzuki folding up and losing those two spots didn’t help anyone out and GEICO Honda not committed to bringing back their 450 program isn’t awesome for these guys either. In short, right now things suck for a number of incredible riders. I’m not sure I’ve ever seen the quality of riders without rides in the 450 class in my twenty years of being in the pits.

Let’s break down the riders still waiting for that phone call and what we think will happen to them.

Saying it’s been a rough year for Stew would be like saying Michael Jordan was just okay at basketball. It was a year from hell for the #7 as he came back from his yearlong FIM suspension out of shape, crashed at A1 and never really got better. Head, knee, bike, shoulder—whatever could happen, did happen. Plus, when he was out there, there weren’t really any flashes of his old speed. Stew fell off a cliff, folks, and I’m not sure he can get it back or if he even wants to get it back. I’ve heard he wants to race in ’17 but I can’t verify this.

WHAT WE THINK: I can’t see anyone with a factory 450 bike that’s open taking him, and despite my pleas, I don’t see Kawasaki giving him a shot on the #259 125 again. Smartop/MotoConcepts owner Mike Genova is lurking over everyone in the 450 class with a big pile of money in one hand and his team’s reputation for chaos in the other. Which rider is going to just say “eff it” and grab the cash? Well, wouldn’t getting Stew be the exact type of thing Genova would love to do? He’s the PT Barnum of supercross, people! In the end, I think Stew’s going to have to go the Chad Reed route and invest in himself. Get some bikes (probably Hondas), get a truck and go racing for a career rebuild. It’s going to be a ton of work but he’s still very popular with fans and he’s still Stew. Racing is better with James Stewart out on the track and even you haters know that’s true. Stew’s gonna Stew baby, so let’s roll out on some Hondas and make it happen!

James’ brother Malcolm is in a better spot, but not by much. Well, actually none of the riders on this list are in a great spot! The reigning 250SX East Region Champion sat out the outdoors (a bad move in my opinion) and waited for rides to come. Only they didn’t and haven’t yet. He has virtually no outdoor results to speak of (11 top ten overall finishes out of 40 career races) so maybe that’s hurting him or maybe teams don’t want to deal with his dad (I like Big James but this is something I’ve heard). I’m not sure. Mookie himself is a happier version of his brother and he’s got some serious supercross skills.

WHAT WE THINK: Talked to someone important yesterday and they put Mookie returning to GEICO Honda (on a 450, not 250 because he pointed out) as “50/50” as upper management at Honda has to decide if they have enough bikes and parts for the new 2017 CRF450 to add Stewart (GEICO’s 450 is really just a factory HRC machine with GEICO graphics). From a marketing perspective, Honda wants it, but from an engineering perspective (guaranteeing they will have enough parts and support) it’s still up in the air. The GEICO deal is by far Malcolm’s best chance of a ride for ’17. If it doesn’t happen, he and James will have to start something on their own methinks.

Brayton was pretty good this past year after a horrible 2015 season, which was his first on the BTOSports.com-WPS-KTM team. JB10 is getting up there in age but he’s still very fast. I heard he’s going for a supercross-only deal and that would be great for him in my opinion. He’s definitely better indoors than out, although look at his moto results, bro, they’re not as bad as you may think. He’s down in Australia riding a Honda this fall and should win that series.

WHAT WE THINK: Brayton could be the guy for MCR as they don’t do motocross and I think JB could make this work. If not, I know Skip Norfolk’s Traders Kawasaki team wants a good 450 guy so maybe this is a match. Please don’t suggest going back to JGR for a third time, that would just start getting weird for everyone. I hope he gets a good ride because I can’t handle Weege shedding tears on his laptop every Saturday night in 2017.

Weimer started the year as a privateer on Team Tedder and ended it 10th in the 450SX points on the RCH Suzuki. Go ahead and look it up. I’ll wait here. Yes, tenth. Weimer skipped the outdoors as a fill-in to get some hardware removed, and he says he feels better now than in years, as the metal plates in his arm were causing some issues. Weimer’s got a 250SX title, podiums in 450SX and MX, and he’s pretty easy to work with so there’s a lot going for him. The bad is that 2016 was only the first time he’s stayed healthy in three years.

WHAT WE THINK: Weimer may end up with a testing/fill-in role for the RCH Suzuki guys or he could be the first fill-in called when a big-time guy goes down (don’t hate, bro, you know that’s going to happen) because he’s fast, he’s a nice guy and he works hard. I don’t see him going privateer route or MCR. We’ve heard rumors of a second JGR team happening with a new sponsor. If this team happens and the team needs one guy for it (Phil Nicoletti gets the other spot if it happens), I could see The Snake heading east.

Bogle’s rookie year in the 450 class on the GECIO Honda was probably what we thought it would be. He was fast sometimes, he got good starts for the most part, he got tired sometimes, he crashed sometimes and he got hurt (which has sort of haunted him his whole career). Still, he’s the youngest, fastest dude who hasn’t blown any chances out of everyone left, so I think he’s on top of any list. Also, I heard he’s bringing some money from an outside sponsor, which doesn’t hurt either. Bogle’s got some potential, no doubt about it.

WHAT WE THINK: With RCH Suzuki needing two spots and with Bogle’s agent working for the same agency that represents RCH co-owner Carey Hart, I think Bogle ends up there. Even without the rumored money he’s bringing in and without the agency tie-in, I still think he’s the guy I would hire as long as his price tag is reasonable (but some managers thought it wasn’t earlier this summer).

Tickle’s been pretty durable his whole career until this year when he missed big chunks of SX and MX with injuries. He did get a couple of 450MX podiums before he checked out, though. That’s pretty good, right? Tickle’s a good, solid, second guy on any 450 team and he’s easy to work with, gives you an honest effort and doesn’t require a lot of money. In other words, he knows his role.

WHAT WE THINK: He’s been with RCH for a few years, he knows the team and program and they know him. Let’s just get this deal done right away, yes?

Wilson’s had a horrible two years with Red Bull KTM due to injuries. And before that he had some horrible years with Pro Circuit due to injuries. But not all is lost—he’s gotten pole positions in 450SX, he’s won heat races in 450SX, and he’s been a top ten guy or better whenever he’s raced. But that’s the problem. He hasn’t raced enough! Whomever signs him is going to be lighting candles like Jobu in Major League to try and keep him healthy. Do you feel lucky teams? Well, do ya?

WHAT WE THINK: Well, the “Genova” factor is high here also and I know he’s talked to JGR about the second spot that I thought Weston Peick had locked up. JGR liked Dean a few years ago when he was the hot free agent. And of course, if that second team at JGR happens that could easily be a home. You’d think that the GPs could be a home for the Scottish Wilson, and he has expressed a desire to race in Europe one year, but when I talked to him at Glen Helen, he told me that there are even fewer rides available there than in the USA. #wecanworkwithspeed

Peick was fast in 2016 whenever he stayed on the bike. He didn’t have the breakout rides like he did in 2015, but as I said, it wasn’t for lack of speed or trying. It just seemed like from the moment he decided to be Clubber Lang to Vince Friese’s Rocky (I’m specifically referencing the first Clubber/Rocky fight by the way. There will not be a rematch) his season could never get on track. I’m not saying throwing haymakers to another guy’s head ruined his season but I’m also NOT not saying that, you know? Maybe there really are Motocross Gods, bro!

WHAT WE THINK: Well, two or three weeks ago I would’ve bet a basset hound that he’d re-sign with JGR (not resign, people. Please be better with this on social media) because both he and Jeremy Albrecht (JGR manager) indicated to me that it was going to happen, although with a pay cut from 2016. But now, it’s still not done and the Sherlock Holmes in me tells me that something is up. One thing that’s potentially wrecking all of the potential deals for these guys is that with so many good riders on the market, prices just keep going down, and teams have to be salivating over the idea of grabbing some serious talent and potential for peanuts. Peick wouldn’t go to RCH or MotoConcepts (he’s been there already), so would he and dad Louie get the fun-mover fired up and do their own deal again?