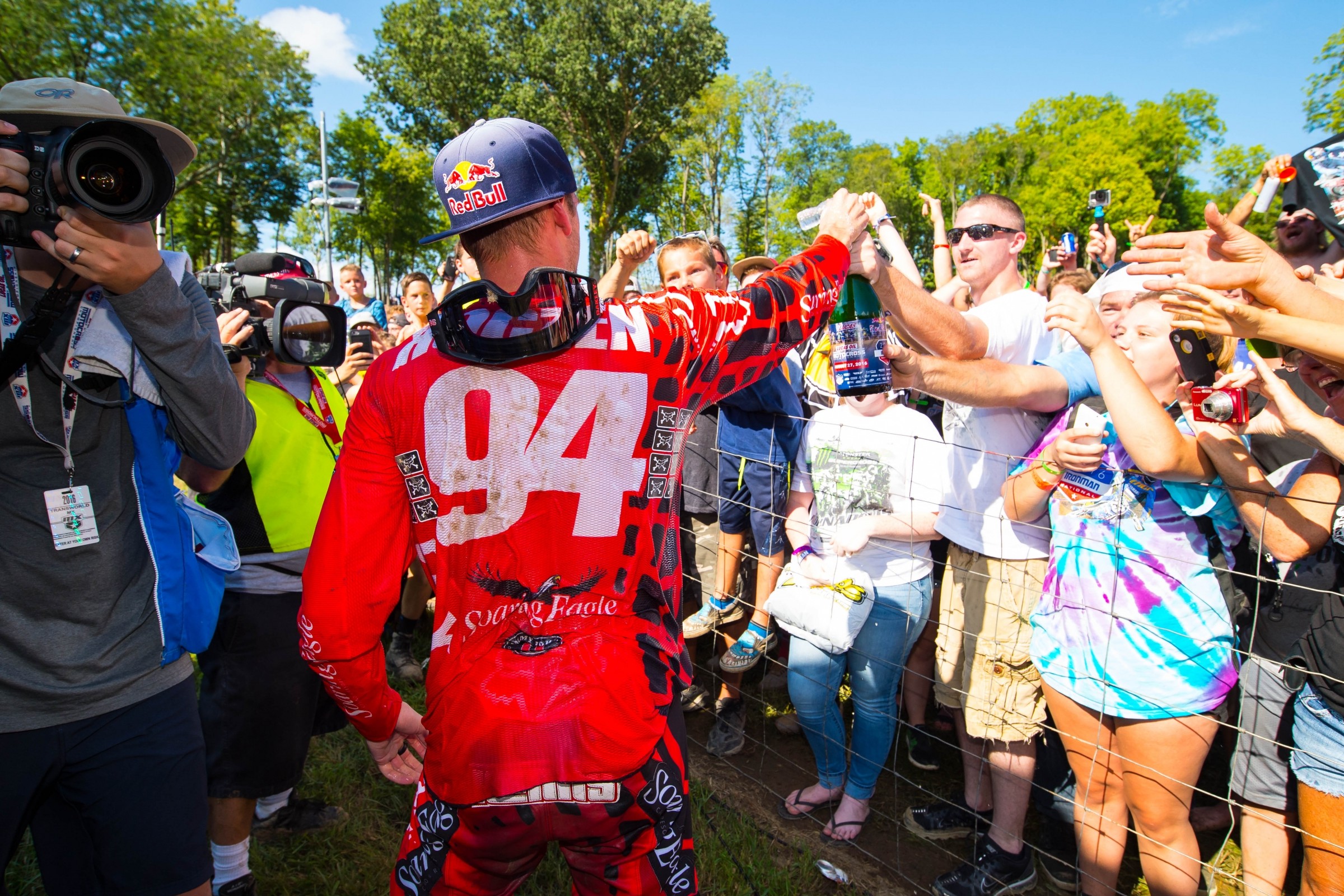 Ken Roczen sure didn’t ride like a guy that had already clinched the 2016 Lucas Oil Pro Motocross 450 Championship on Saturday at the season finale at Ironman Raceway. He ended the season with another emphatic 1-1 finish, leading every lap of each moto. The Soaring Eagle/Jimmy John’s/RCH Suzuki rider will now go into “vacation mode” before returning for the Monster Energy Cup in October, with all signs pointing to that race being his debut with Honda HRC.

Roczen spoke about his day at the post-race press conference.

Racer X: Obviously things were a little bit tighter up front in moto number two. Go ahead and take us through your day. It was quite a spectacular day for you.
Ken Roczen: We didn’t really know what was going to happen with the weather and stuff. It seemed like yesterday or the day before it was going to be fine and then all of a sudden it changed and it was just supposed to pour all day. It ended up being no clouds in the sky and ended up being a beautiful day. Obviously it was a little sloppy in the morning but that changed. The first moto it was still a little rough in some spots with the mud and everything, but I knew for the second moto it was going be a lot better. I grabbed two awesome starts. I holeshotted the first one and the second one I was top three. Put in a good charge the second one and went for another win. I said it last week, we wanted to do another 1-1 and finish the season off and not just slack around. So that’s exactly what we did. I can’t be any happier. It’s good to take some time off and as good as the season was let the whole thing just settle and enjoy.

How much did your social media blow up with the two-stroke?
I probably have like 1500 comments on that thing. And they were not all positive. I’m always up for shits and gigs, but I wasn’t able to race it. I just started going out of my mind and actually [wanted to] get back to a focus and race my normal bike.

How much did the bike change or did the track change from the first moto to the second moto? Did you make any changes? You looked super comfortable both motos.
No, I left it. I made just a little change in-between second practice just in the mechanics area, but after that I left it all day. The track changed quite a bit. Like I said, in the first moto it was still quite sloppy in some spots. In the second moto it was a good racetrack. You could see the ruts were pretty deep. Overall it was a pretty gnarly track. But I left my bike the same all day. At least I know how it reacts.

What’s on the dinner menu tonight?
I hadn’t really thought about that yet. Something good. Doesn’t matter what it is—something good.

The pizza and the Coors seemed like it worked pretty well last week.
It did. And it will.

What was the motivation today? You certainly didn’t ride like a guy who had already clinched the championship.
Honestly, I’m not lying, it was really tough this whole week. I tried to tell myself it’s not over, we’ve got another race, but at the same time things are wrapped up. I kind of went a little bit vacation mode almost. It was really hard. I went out to the track and stuff and I started riding and I was just riding around and I was like, here you go. I was kind of wondering, what am I doing? It feels like the seasons over, but it’s not. We have another race to go. So I just took it easy this week. I was on the bike obviously just to keep the feeling. I knew for a fact that when I was going to show up here my mental game was going to be on point and everything was going to change. I just went out and rode.

Talk about what you and this team were able to accomplish this year. I think you were the first privately funded team to win this championship.
If you would have asked me last year at this press conference what’s going to happen this year, I would have said I do not know. But it’s pretty amazing for me to see what we have done, where we came from and how much of a low we had last year. Like you said, we’re the first private owned team to pull it off. The results speak for themselves. I had so much more fun this year. The vibe and everything was way, way better and obviously my bike was way better than last year, too.

Talk about your relationship with Ricky and Carey. On social media we saw you guys arm wrestling and all that stuff. It looked like it was fun.
Ricky and Carey and I are actually really good friends. Especially Ricky, he’s a character. I love hanging out with him beside dirt bikes. That’s the most fun. We’re good friends. I’m probably actually going to go down to Destin in the next couple of weeks and go with him on the boat and have some fun. Obviously it was cool for Carey to be here for the last race of the season. He wasn’t there last weekend but he came this weekend. It’s cool to have him here. It’s exciting having him around because he never really comes to any outdoor races, so it was cool.

Have we seen the last race on the Suzuki? What’s left on the calendar for you?
As of right now, this is for sure my last race until Monster Cup. I’m planning on racing Monster Cup. But right now for me it’s vacation mode.