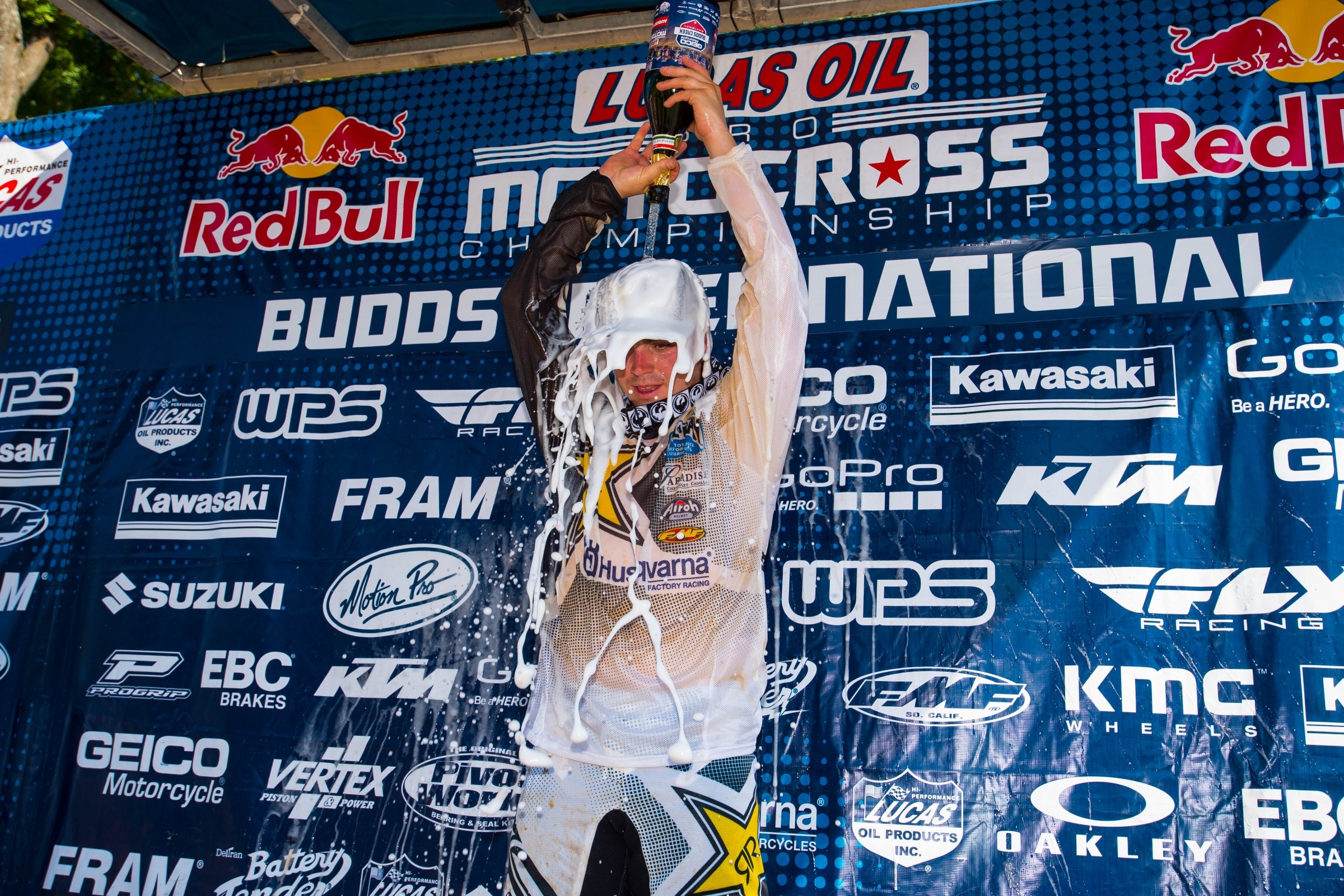 In 2006, KTM prospect Zach Osborne headed to the Budds Creek National for his third professional motocross race. He took the lead in the first Lites moto and took off, building a solid gap and seemingly having victory in hand with only a few laps to go. Then the wheels came off. He completely ran out of energy and put on one of the all-time fades in the sport, dropping from first to 18th in the final laps.

It didn’t get better for a long time, and soon Zach found himself exiled to the Grand Prix series in Europe, no longer able to find a ride in the U.S. From there he worked hard, rebuilt himself, and finally, a decade later, notched his first domestic race win ever, at the track that took so much away from him.

He talked about that and a number of topics at the post-race press conference.

Racer X: Great job today to take your first-ever overall win, especially after some disappointment last week. Go ahead and take us through your motos.
Zach Osborne: The first moto my start was pretty mediocre, maybe top ten-ish. I got into fourth behind Joey [Savatgy] and I made the pass and he got me right back. I was kind of grenaded, I was a little too hot and just felt like I never had a whole lot of spunk after that. So I just took a fourth. I told my mechanic going to the line, 4-1 would probably win it, but I wasn’t sure if I was going to make that happen. Just went in with a positive attitude and had a good race with Austin [Forkner] for fifteen or twenty minutes and took the win.

Can you tell me about the pass for the lead? It was a pretty aggressive, nice-looking pass.
The track wasn’t one-lined today I would say, but I would say there was one really good line and then some other ones. I felt like he was just kind of taking it easy right there in that spot a couple times. I got sort of close enough and kind of forced the issue down the inside. It was a tough pass, but that’s racing.

You mentioned on the podium that you have some history at Budds Creek like ten years ago. It’s like the perfect full-circle story on this track.
Yeah, my whole life is kind of like that, sort of like Forrest Gump. My mom compares me to Forrest Gump all the time. Just irony everywhere. So to win here ten years later, it’s gratifying. It’s ironic. It’s a lot of things. It’s really cool. I told my parents, I feel like I need to win at Budds Creek before I can win anywhere else. Get the monkey off my back. Made it happen.

Remind everyone what happened back then. You were leading 20 minutes in and just totally ran out of energy?
Yeah, I think I led for maybe even more than 20 minutes and still don’t even know if I scored points in the moto. I got like 23rd [Osborne finished 18th in the moto]. That started sort of the downhill slide, which took me to Europe, and Europe sorted started the crawl back to where we are today.

The problem for you when you had that moto and you ran out of energy is that you get labeled as, “He’s one of these talented amateur kids that doesn’t train.” So talk about what you were dealing with then and were you training? What did you have to learn to fix all that?
In the beginning of my pro career I maybe went pro too early. There were some tough decisions there at the beginning that were made, not sort of by me or even my parents, just other people and stuff. It was tough. Sort of when that happened it motivated me to work hard, and now I feel like I’m one of the more fit people in the class or even in the pits. I work hard during the week to not let that happen anymore. It’s gratifying.

When you were in Europe and you were doing the GPs, did you always think you were going to come back here or did you think maybe Europe is where I’m going to end up forever? Did you always have this on the horizon to come back?
I enjoyed my time in Europe. I would have been okay to stay there. It was tough on my family more than anything. It’s a long ways away. It’s not like even being in California, that’s still tough but it’s a lot closer than living in England. I would have been okay with that but I felt always that I had some things that needed to be taken care of here as well.

These last few races were terrible. You had all sorts of bad luck. Talk about bouncing back from that. How did you feel after last week when you didn’t get any points?
Last week I was pretty devastated. I had four mechanicals in three weekends. Four zeroes, all of which I was running in the top five at the time of it happening. If you go back and count points and stuff like that, I would be really close to second and third right now instead of whatever I’m in, seventh or eighth. So now it’s pretty disappointing. Last weekend to have two DNF’s, completely mechanical, I had a meltdown. I’m not going to lie. I was pretty pissed off and said some things that maybe were a little harsh, or maybe not too harsh, I don’t know. But I made it here today. It worked out!

"I’ll be with Husky next year, maybe two years. We’re not sure. We’re still sort of doing the deal."

Are there just random things? Can you yell at people to fix it or is it just all random what happened?
I don’t even know, to be honest. It’s a little bit above my pay grade to know those sort of things. I just told them how I felt and came here this weekend expecting something different. I just try not to look back and try to look forward.

So when you were in the lead did you know that you could win the overall? If you did, what were those last few laps like? Was it weird or did it feel normal?
No, actually the last time I saw third place it was AC [Adam Cianciarulo] and I was thinking he won the first moto instead of Alex [Martin], so I had it completely wrong. I was thinking, I’m going to go 4-2 for second overall, or 4-1 for second overall which I’ll get a moto win and I’ll be close…but then on the last lap the pit board said I had the overall, so that was pretty amazing.

Did it almost help? You had less to worry about.
Yeah, well, I think about a lot of things when I ride so it wasn’t anything new to be adding numbers!

So this is a pretty amazing turnaround from last week.
This is the team’s first outdoor overall. It’s a big day for everyone. I can’t complain. It’s very gratifying, especially after the weekend we had last weekend. I was pretty bummed out. I didn’t know where to turn or what to do. And also to win here ten years later, it’s just weird.

A hot day today, do you think you have an advantage in those conditions?
It’s something I learned over time. I feel like for me personally the more adverse conditions, the rougher the better, the hotter the better. I just feel like I’m in good shape and I can handle sort of whatever’s thrown at me better than most. So this kind of played into my hand today.

Coming up to the end of the season, what’s the future plans for you?
I’ll be with Husky next year, maybe two years. We’re not sure. We’re still sort of doing the deal. I’ll be with Rockstar Husky, I’ve signed the letter of intent.

Just explain your overall love of motorcycling. You are an all-time motorcycle fan. You’re not just some guy who’s like, “I was good on a dirt bike so I’ve got to ride to get paid.” You love all motorcycling. Talk about just how much you love motorcycles in general.
I do, probably too much. My wife gets onto me for wanting to do everything under the sun. I would race every weekend. I love to ride. I have fun when I ride. I enjoy what I do. I love racing, whether it be endure—I don’t care. I just like to ride.

Supermoto I think is going to be your thing. Are you going to do that some day?
No, I’m not that keen. I would like to try road racing for sure. I would definitely go to a track day.

Were you always like that, or is that something that’s come later as you’ve been up and down in your career? Were you like that at fifteen too?
I don’t know. People ask me how I got to where I am, riding-wise. I can’t say that I as a kid loved it like I do now. I definitely love it more now than I did when I was twelve or fifteen, when most kids love it. I just enjoy riding and I’m grateful to be able to do something that I truly enjoy for a living. I just like dirt bikes.

I know you’re not on the ISDE this year, but the USA’s chances now that the event has switched to a four-man team—better or worse?
I don’t know. I think their chances are good. It’s just a tough race to win. Half the reason we get beat is because they’re better at cheating than we are. Not that they all cheat, but basically there’s back door stuff that’s going on out in the middle of the woods where they’re getting head gaskets off of other people. A lot of times the French guys have chase bikes that are identical to the bikes they race. Who knows, maybe they hit some transfer trail on that while the other bikes are being serviced. It’s a tough race to win. There’s not a lot of regulation and it’s not all about the race. There are a lot of factors. I think their chances are good, but it’s a tough race to win.