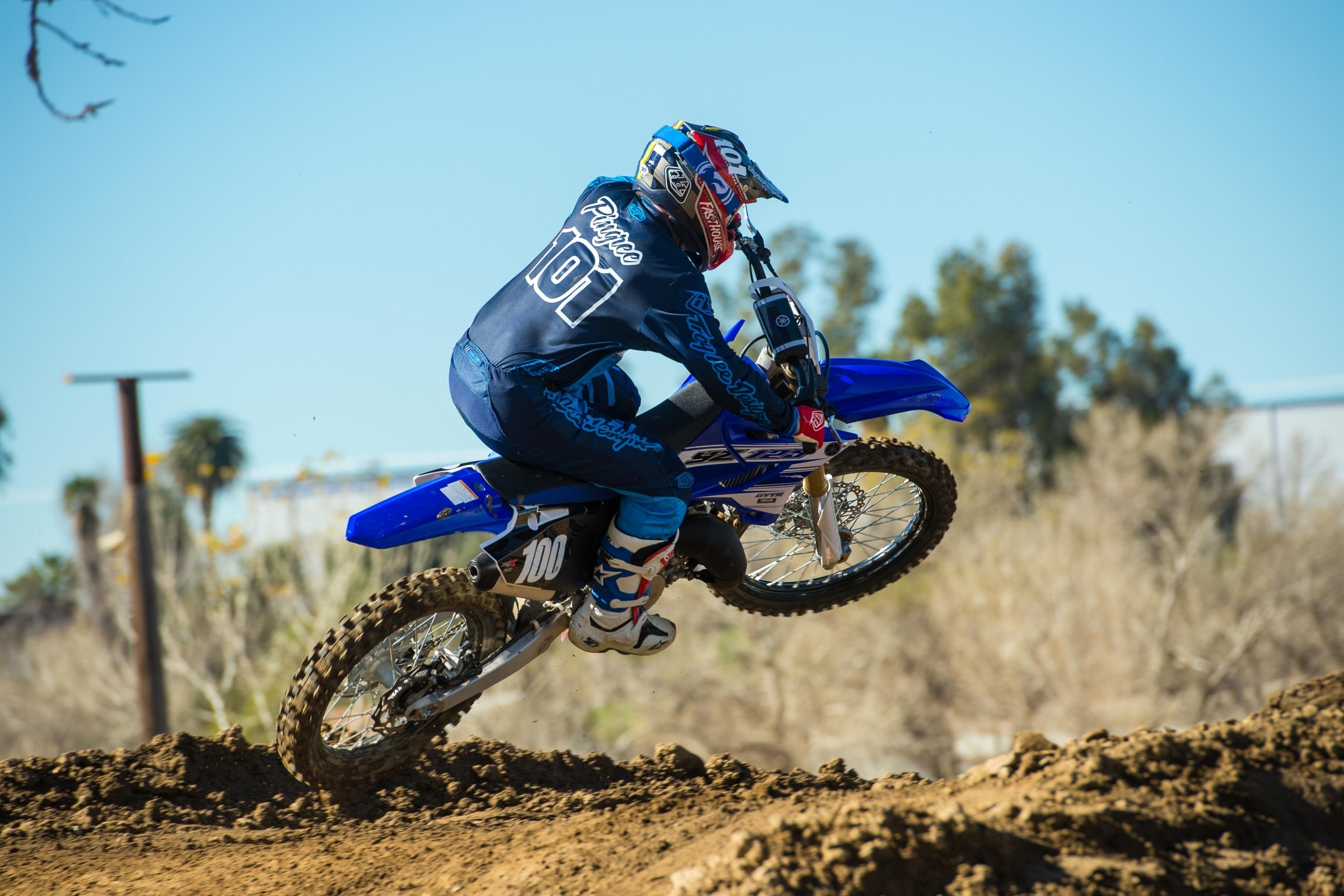 That 1-2-5 ‘ish race at Washougal was one of the coolest things I’ve seen in a long time! Nice job on getting on the box at a National again. Loved the Beast from the East ’89 replica! Anyhoo, on to my question.

I know it may be a bit early to talk SX, but in looking ahead and scheduling my winter TV watching/recording schedule, I am wondering if I should watch SX leading up to the ‘Chase’ (or whatever lame name the promoters come up with), or just wait until the ‘Chase’?  Of course I am going to watch anyways, but I guess what I am really asking is: What’s the incentive to win during the regular season? I’m sure win bonuses etc, but why not do just enough to float into the ‘play-off’s’, stay healthy and peak at the end of the season?  I’m not Captain Obvious so I’m sure I’m just missing something. Maybe I answered my own question.

Jeffro,
From the frozen tundra  - Wisconsin

I’m sensing a heaping pile of sarcasm with a side of bitterness. Does that sound about right? Look, I know there is a lot of resistance about the “Chase” format but it will only make racing better for fans. Riders have a lot of money on the line, for one, so they’ll go hard for the cash. And even though dominating early in the season won’t pad your points lead like it does now, confidence is something that will carry through an entire season; that is the primary motivation riders will have for racing hard early in the season. Think of it like a pack of dogs all trying to pee on the championship trophy before the series heads east. As fans, we get to see the series reset towards the end of the season and basically start over. How is that bad for us? The only guy getting jacked is the rider who has been fast and consistent all season long. For him, this is like dirt bike socialism. The slugs barely scraping their way into the top ten get a whole bunch of points from the guy who has been earning them with wins all season long. I’m betting Bernie fans love this concept.

I appreciate your honesty and your support for two-strokes, especially for 125cc bikes, even though I personally skipped the 125s in the early '90s. I just made the decision to jump from 80cc bikes to 250cc two-strokes (then 450 four-strokes). What would be your position on a three separate displacement rule at the Des Nations? 450,250,125. Obviously there will be issues with manufacturers. It seems to me that it could/would perhaps get them heading back into 125 development. Just curious.  Go ahead and make fun of my name  (again). West Overstreet. from McHenry, MS! (Three miles from my friend Bobby Regan! Ever heard of him?)

WLDWEST110. THANKS FOR THE INFO N INSITE

I’m not going to make fun of your name but you do sound like the bastard child of Kim Kardashian and Kanye. Or like the middle part of a residential address. This is going to be the last question I answer about 125’s for a little bit. I’ve been ranting lately and I’m starting to remind myself of that lunatic on a street corner with a bullhorn screaming that everybody is going to hell. My push for the 125 is geared more towards the amateur side of our sport as an entry-level machine or transitional bike from a mini. Racing at the pro level probably isn’t going to go back to racing a 125, and that’s okay. If you tried to impose a 125 class at the des Nations you would have limited support from teams and manufacturers, and those are the guys who foot the bill to get to that event.

The biggest problem with the des Nations is it has become lost in the multitude of off-season races that actually pay big money to riders. The MEC, Red Bull Straight Rhythm and now this German event they are trying. You also have the traditional international off-season supercross races that pay good money. Not to mention the USGPs that the European manufacturers and Monster Energy are forcing their riders to compete in. There isn’t any down time for riders as it is and the des Nations has become a huge hassle for riders who are trying to focus on being prepared in January.

So I just read the “Redux: Gold and the Rush” and have a question. So I understand why these manufacturers are trying to scope talent at such a young age. They want to groom their riders to be perfect. Train them their whole lives and by the time the can be a pro they should be fantastic [fragment]. Now, that has worked in a lot of cases, but at the same time it hasn’t worked a lot. Just because someone is good as an amateur doesn’t mean they will be good pros (mike alessi [capitalization] being a prime example). But my question is, does that actually help? They are taking kids that barely hit puberty, taking them out of school and training them hard at a young age. From what I understand, extreme workouts stunt growth. Why train these kids and risk that? Then there is also the fact that humans don’t reach peak physical condition until they are in their mid to late twenties [mid-to-late 20s] and early thirties [30s]. (http://livehealthy.chron.com/men-women-reach-physical-peak-2652.html). So why are we trying to sign 13 year old [13-year-old] kids and possibly ruining their bodies, for them to not make it in the pro ranks? I don’t know the extent of exactly how much help they get from the teams who sign them so I would also say that you are also asking A LOT from their families as well to get them all over the country to race or practice and buy new bikes and equipment [run-on sentence]. So I don’t see why they wouldn’t make the pro license age 18. That way these children that are being signed to contracts before they hit puberty don’t burn out 10 years before their peak physical abilities [fragment]. That way at Loretta Lynn’s people are trying to sign 16-17 year old kids that have at least hit puberty a little bit [fragment and just plain shitty sentence structure]. They also will not risk burn out nearly as early. Pros are getting burnt put [what?? Wrong word, genius] before they even turn 25! Ryan Villopoto is only 27 and was arguably in his peak physical form, but decided to call it quits because he was burnt out. I just do not think it is worth it to be signing these kids at such a young age. Pointless and risky for the teams, [unnecessary comma use] and especially the kids they sign. [yet another fragment]

Thanks for taking the time to read [need a comma]
Andrew

(P.S. whoever [capitalization] does the editing for RacerX [spacing] misses a ton of grammatical errors [need a period])

Just for the record, Mr. Grammar officer, you had no less than ten grammatical errors in your letter, some of which I highlighted (three of which were in your sentence about our grammatical errors, ironically). And you just wrote a couple paragraphs! We turn out a ton of content and some mistakes are going to slip through the cracks. I offer a thousand apologies, Oh Flawless One. We beg for your forgiveness.

To your point, I think the money that gets poured into amateur racing is obscene. I don’t mean that the manufacturers shouldn’t support amateur racing—the complete opposite, actually. Instead of dumping hundreds of thousands of dollars into a small handful of riders that they groom for their pro team, why not give more bikes and support to more riders and keep the playing field more even? Mitch Payton has voiced this same opinion and told me that he feels sorry for any kid who shows up to Loretta’s with an exhaust and some race gas because he doesn’t stand a chance against Pro Circuit’s fair-haired boys on the Team Green program who are essentially running factory equipment. Once one team goes all-in with equipment like that it forces all the teams to do it. Now GEICO Honda, Troy Lee Designs KTM, Star Yamaha and Pro Circuit are providing race bikes that are practically identical to what their pro team riders have. Most of these kids won’t make it in the pro ranks, sadly. Injuries and circumstances can weed out even the most can’t-miss kids. Adam Cianciarulo certainly didn’t think he would be where he is at this point in his career. I expected him to have at least a couple titles under his belt. I’m not saying his career is over but he was the next golden child and now, two shoulders later, he’s grinding just to find the podium. I would love to see the teams reach a mutual agreement about what type of support they provide to amateur kids but it will never happen. These teams want to win and there is very little they won’t do to make that happen. So, if your genetics are good and you can bring a team manager a 3-D image of your unborn child in an exemplary attack position with his hips “unlocked” you can probably get him a six-figure deal through 2030 before he gets his umbilical cord cut. Good luck.