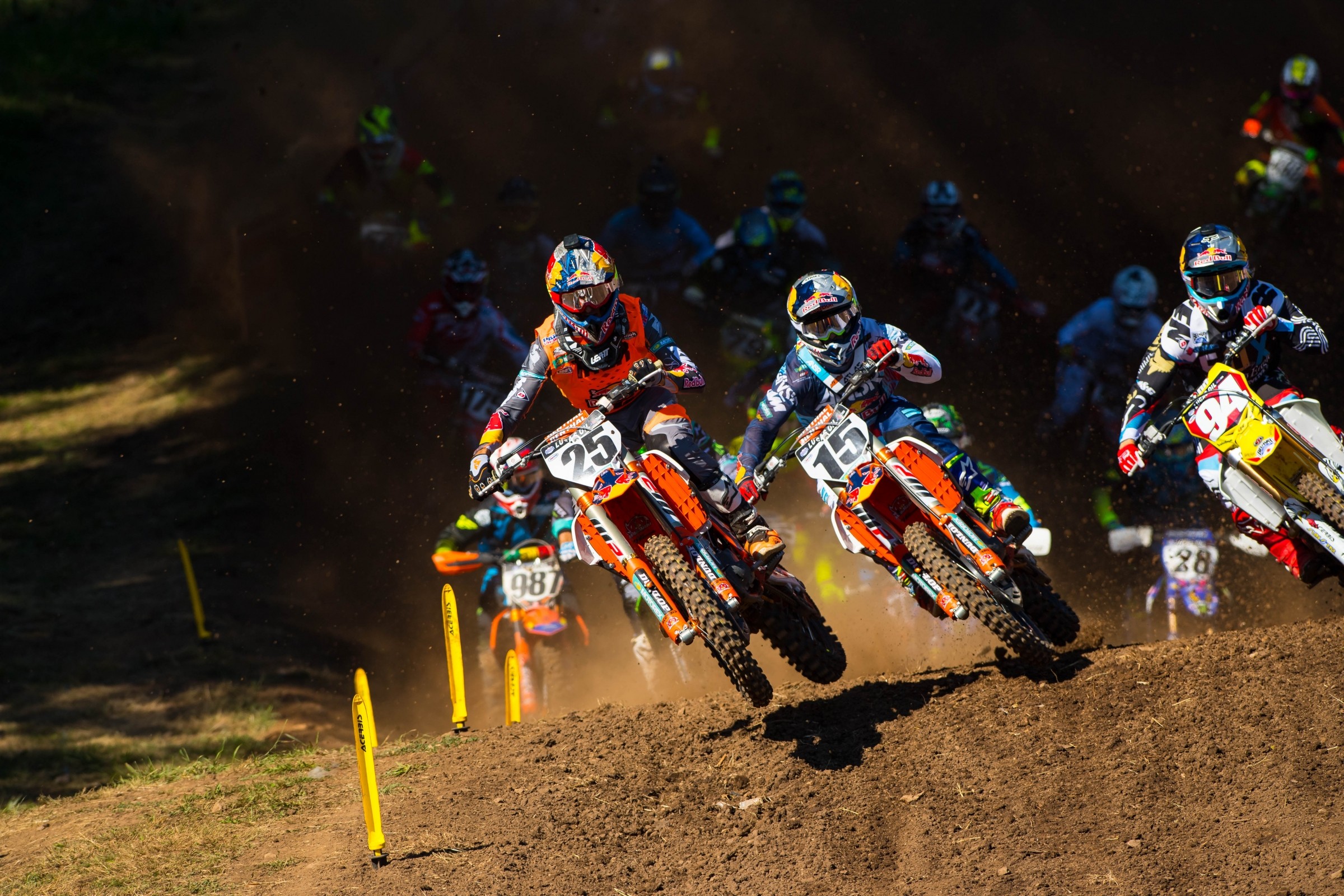 Unadilla holds a special place in American motocross history, and it’s safe to say more crazy things have happened at this track than any other in the series. From freak crashes to bike problems to international intrigue, Unadilla has seen it all. And to make matters even crazier this weekend, there are thunderstorms in the forecast for Saturday. So we really don’t know what we’re going to get—you’d better watch until the last lap, because some of the wildest things in Unadilla history have taken place on that final go-around. – Jason Weiagandt

Thanks to Ken Roczen’s massive 55-point lead, the battle for the 450 National Championship is all but over. Surprisingly that hasn’t changed how exciting the racing has been lately. After losing to Eli Tomac at Southwick, Roczen bounced back for a jaw-dropping win at Spring Creek, only to watch Tomac run away with a second-moto win, and overall, a week later at Washougal! The racing up front has definitely been more exciting and unpredictable lately—we’ll see if the two stage yet another fantastic battle this weekend at Unadilla. –Aaron Hansel

The points leader in the 250 Class (Cooper Webb) has a commanding lead (51 points) and probably won’t be caught. But, like the 450 Class, there’s absolutely no lack of excitement, thanks in part to the second-moto controversy at Washougal involving Webb and Joey Savatgy. Sometimes these things get built up to be much more than they really are, and it doesn’t carry over to other races. Other times, the drama never ends. We’ll see if there’s any spillover this weekend. -Hansel

Superb second moto from Austin Forkner at Washougal. The Monster Energy/Pro Circuit/Kawasaki rider took advantage of the Savatgy/Webb situation to win his first career moto. Afterward Forkner acknowledged it would have been tougher if Savatgy, Webb, Jeremy Martin hadn’t all crashed on the first lap, but a win is still a win, and now that he knows what it’s like to lead a race from start to finish, it wouldn’t be surprising to see him up front yet again this Saturday afternoon. -Hansel

In a row, that is. Alex Martin put in a pair of outstanding rides at Washougal, withstanding immense pressure from Savatgy in the first and steering clear of the pileup in the second to go 1-2 for his second overall win of the season. He probably could have had one or two more wins too if not for some weird luck and unfortunate crashes, but the good news for Martin is there’s still time left to chalk up some more victories. We’ll see if he makes it two in a row at Unadilla. -Hansel

Justin Barcia hasn’t had the abrupt turnaround in the second half of the season like he did last year, but a look at the results reveals that he has indeed gotten better. In the first half of the season Barcia averaged 12.17 points per moto, but has improved to 16.33 so far in the second half. Barcia himself admitted to Racer X’s Jason Weigandt that, while not winning is frustrating, he isn’t able to match the current pace of Tomac and Roczen on account of still being unable to find “that perfect spot.” If he finds it this weekend, the racing up front will get even more exciting. If he doesn’t, we could still see an outstanding battle for third between him and Marvin Musquin. -Hansel

Home Away From Home

Tracks like High Point, Washougal and Unadilla, which require more throttle control than brute force, and award technical ability, seem to come easier for Marvin Musquin. Since 2014, Musquin has only finished off the overall podium once (High Point, 2014) at the aforementioned venues. A podium is in the cards, but can Musquin find more speed this weekend to challenge for an overall victory? –Chase Stallo

A week after squaring off for the AMA Horizon Award at Loretta Lynn’s, GEICO Honda’s Chase Sexton and CycleTrader.com/Rock River Yamaha’s Bradley Taft were set to make their pro debuts this weekend. Sexton, who went on to win the Open Pro Sport class and the Horizon Award, now might be out with an avulsion fracture in his knee. As for Taft, he’s healthy and ready after spending the summer with none other than Cooper Webb. “I just need to go out there, get a good start, and not worry about anybody else. I need to sprint until I get tired,” he told us. Also making his debut is Jerry Robin, who won the 250 All-Star A/B class last week. (You also may remember him as the kid who qualified for Loretta’s B class on a 1985 Honda CR250R a few years back.) He is riding for the Blue Buffalo/Slater Skins Yamaha team in the 450 Class. With Sexton likely out, how will the two other rookies fare this weekend? –Stallo

Looking back at some recent debuts after Loretta's.

Washougal was a nice shot in the arm for the Troy Lee Designs/Red Bull KTM team. Alex Frye and Shane McElrath are out with injury, but Justin Hill returned to action after a back injury stopped him at Round 2. The Oregon native didn’t appear to miss a beat, riding to a fifth overall at his home venue of Washougal, Washington. Unadilla will certainly offer a much different track. Will Hill’s success continue away from home? Also at Washougal, Jessy Nelson got back into the fray for the team, and nailed and impressive third in the second moto. Will we see a repeat performance this weekend? -Stallo

Fredrik Noren will return to Honda HRC for a third time in as many seasons this weekend at Unadilla. Noren, who also helps test with the team, said that although the pressure increases with a factory deal, he feels right at home: “Obviously you get on the factory bike and everyone’s going to expect more from you, and you want to do better and kind of expect some more from yourself as well. But I’m actually really comfortable with all the guys over at the Honda team.” The Swede is coming off a season-high eighth in the second moto at Washougal, will his success continue in his return to Honda? -Stallo