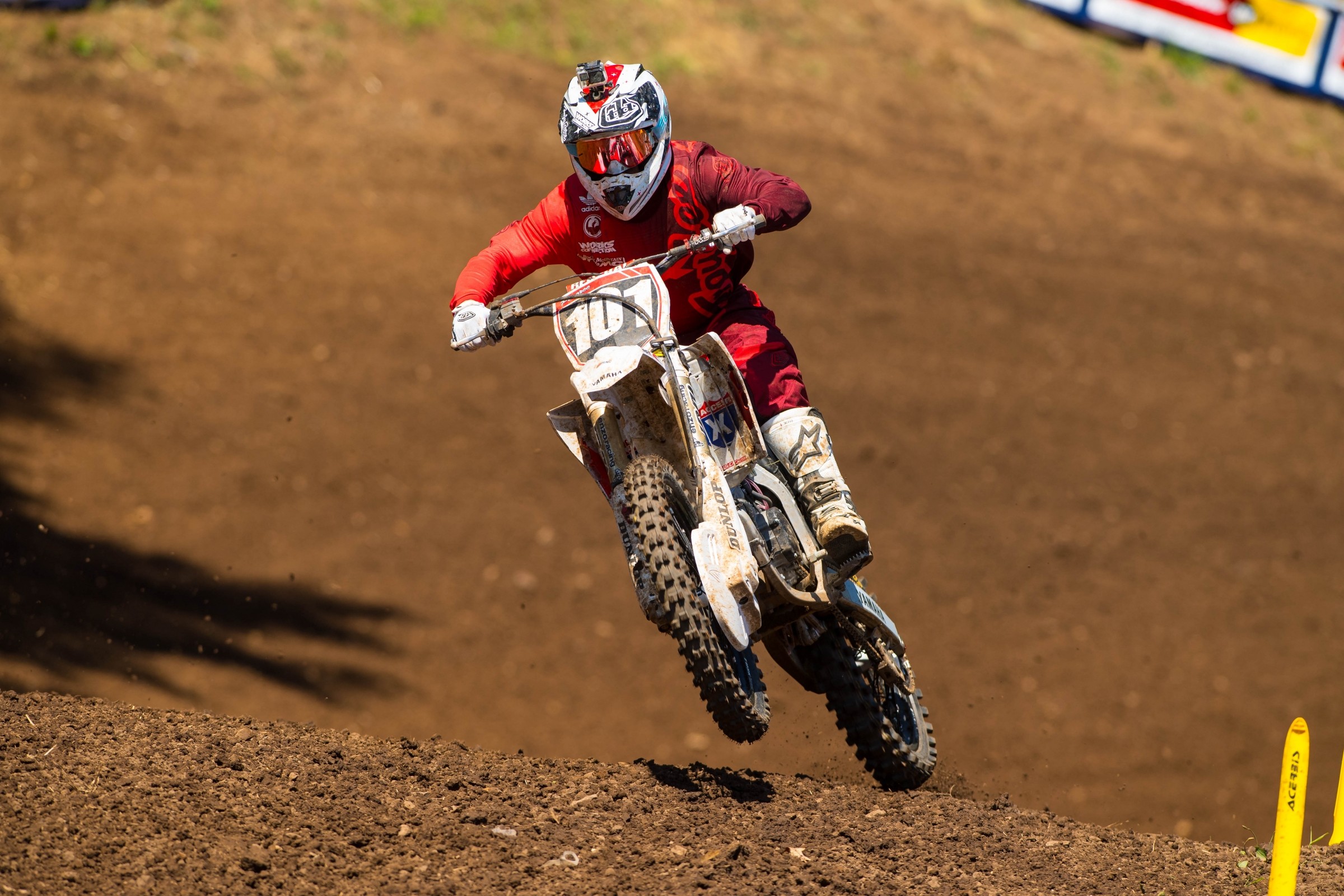 The 125 race at Washougal was great!  Tell us about it!  How was it competing again?  Young Mr. Brown, Hot Sauce and you were on it!  Congrats on the podium – been a bit since we saw you up there.  I loved the sound of a pack of 125’s going up horsepower hill again. I’m hoping the next Sign of the Lap Times includes you guys…

Another question, speaking of packs…  I don’t often do the whole podium thing, but since it was you and Ivan (and my lazy butt happened to be nearby) I walked over.  Kids are the future of our sport and I love to see them excited about motocross…but, wow!  The podium grounds can be treacherous post-speech with a wolf-pack of eight-year-olds circling for the kill.  Tell the (non-PC?) truth: how annoying is it to have the whole pack circling, scrambling, grabbing and screaming for your (stanked-up) goggles, hat, gloves, jersey, etc.?

It was awesome to be back on a national track and racing in front of a crowd like that. I think the GoPro video speaks for itself but between the track, the fans and the bike I don’t think it could have gotten much better. I would have liked to have seen our lap times posted this week as well, but none of us had transponders so there were no official times.

Fans fit into one of two categories for me: The ones who are actually fans and want something of yours, or the slimy little crap bags who don’t care who they get something from as long as they get something. And that second group has no shame when it comes to asking. I had a kid screaming at me telling me to give him my helmet! And when I said I couldn’t he looked at me like I was the dick. Fans like that have been around ever since I was racing and I don’t see them going anywhere. Either way, if they have another one of these 125 races, I’m there.

Enjoy reading your articles each week and look forward to the questions asked by the racing community and your always humorous and off handed comments.

My question is, I have been racing motocross since the early ‘70's and watched first-hand how our beloved sport has grown over the years. It has been a very big part of my life and will remain as such until I'm no longer. Introducing youth to the sport is now my greatest passion. Can you describe from your professional prospective what has been done right and what has been done wrong in our sport with regards to corporate sponsorships, event promotors, manufacturers, the media, etc. and where do you see the sport going in the future both near and long term?

Thank you for the cool articles and bike tests, I certainly look forward to them each week.

Wow, that’s a pretty deep question. I think the powers that be have done an amazing job of promoting the sport and growing it to the best of their ability. It’s in their best interest to expand supercross and motocross through media outlets, advertising and television packages and they’ve continued to improve in all of those areas. Inappropriate sponsors like Camel and Coors were replaced with video games and now energy drinks, which have their own problems but are more acceptable than booze and tobacco in a sport marketed to the young. I didn’t sit in on the manufacturer’s meetings about the four-stroke revolution but most will confirm it was driven by the need for a cleaner burning engine. Except now they have injected two-strokes that are cleaner than four-strokes. And the AMA overshot the CC number by so much it effectively killed the two-stroke and made bikes that have become dangerously powerful. In the name of progress, combined with a weak dollar, technological advancement has driven the cost of bikes through the roof. I don’t know where we go from here, except to say that without a more affordable alternative the number of people who can get started in our sport will dwindle. Maybe over time we go back to two-stroke technology, just like we did the first time. After all, they are lighter, simpler and make more power per cubic centimeter by a long ways. Then again, four-strokes have gotten really good and they make it much easier to ride. Only time will tell.

I am wondering if you can tell me something. What is the ideal height to be an MX racer? I mean who has it better, A-Mart or Benny Bloss? There has to be over a foot difference between them! My guess is, you shorter guys (sorry to put you in that category, bro) have it better in the corners but the tall guys might have it easier in the woops? I mean, corners are more important than most think but whoops are a big deal also, right?

So if you wanted your son to grow up and be a successful pro racer like some of the guys you hang with, (I'm just kidding man! - like you) what height would you hope for?

If you want to play basketball you have to be tall. Like, ridiculously tall, in fact. If you want to play football you have to be tall and thick. Volleyball players have to be tall. Swimmers must have a long wingspan and golfers have to fit into goofy polyester pants. It seems like there are specific physical requirements to compete at the highest level of every sport... except motocross. Mike Bell, David Vuillmin and Travis Pastrana all competed at the highest level while Ricky Carmichael, Mark Barnett and Ernesto Fonseca all competed at the, ahem, lowest level. Sorry for the short joke there, guys, but we have to laugh to keep from crying. Am I right? Anyhoo, one of the many cool things about this sport is you can be successful regardless of your physical build. You just have to be big where it matters… get your minds out of the gutter, ladies. I’m talking about heart. Tall guys get an advantage in whoops and mud while short guys can sneak through ruts better and typically get better starts. So, what’s the ideal height? I’d say somewhere around 5’10”. Ken Roczen is a great example of a height that seems to fit a dirt bike perfectly. So, either have kids with a woman around that height or see if you can get Ken to impregnate your wife. I’m sure she’d be up for it.