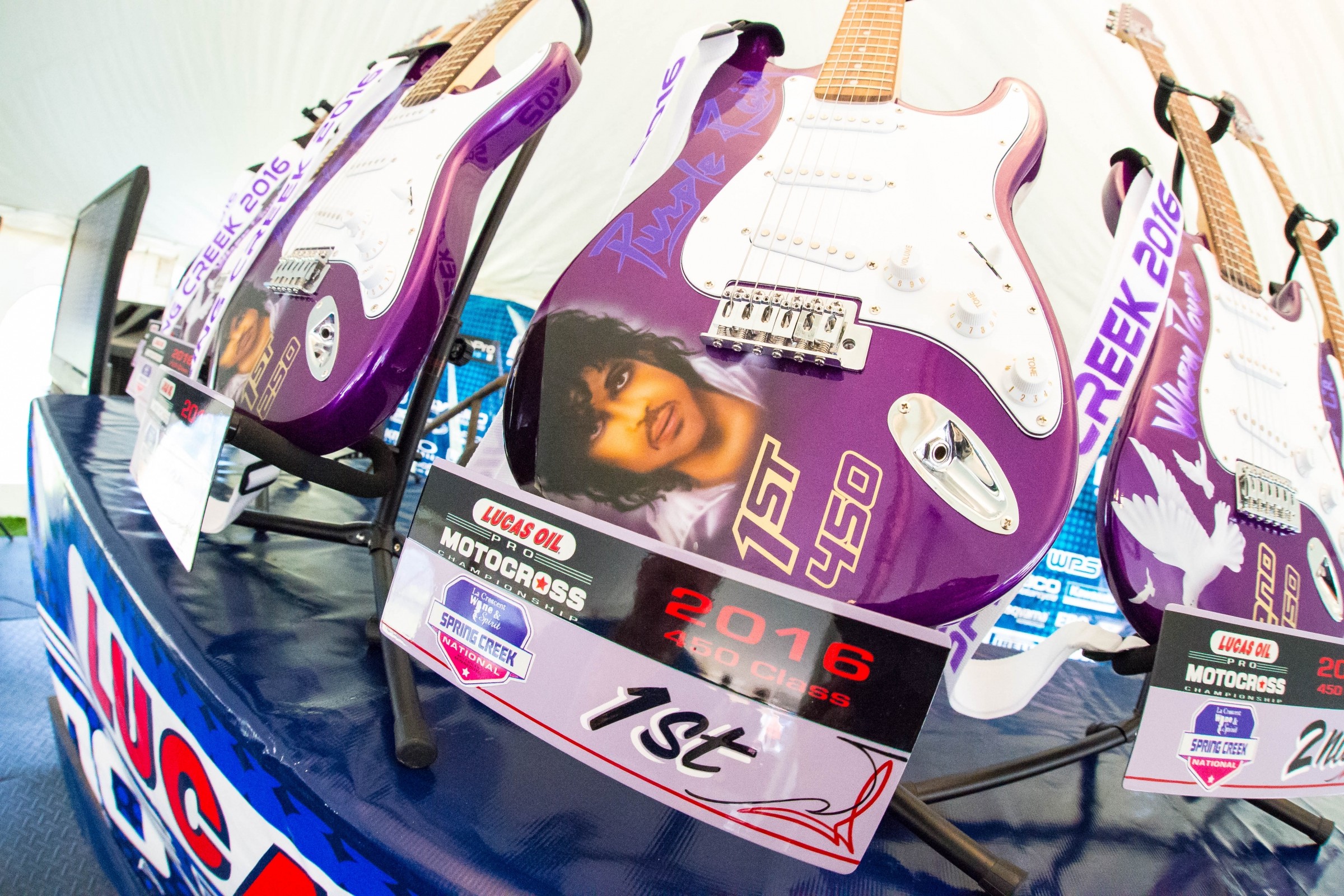 The Doctors Series: The Finale

Earlier this week, Monster Energy released the final episode of the highly successful web series Valentino Rossi: The Doctor Series, which gives a behind-the-scenes look at the nine-time MotoGP World Champion. The five-part series has accumulated nearly four million views on YouTube already. The fifth episode travels to Tavullia, Italy, where Rossi’s VR46 company is headquartered. The episode explores Rossi’s interests away from the track, which include a sprawling merchandising business, as well as the VR46 Academy and the Sky Racing Team VR46 Moto3 team. If you’ve missed any of the episodes, you can watch them all here.

Later this year, the Discovery Channel is rolling out a new television miniseries focusing on the history of America’s iconic motorcycle manufacturer, Harley-Davidson. The three-part, six-hour series, which airs September 5-7, will focus on the brands founders, William Harley and Arthur Davidson. Produced by Raw Television, many of the location shots were filmed in Romania. Check out the trailer below.

A bizarre story surfaced out of Brazil this week, as Brazilian police are reportedly investigating the apparent disappearance of the mother-in-law of Formula 1 chief Bernie Ecclestone. Citing reports from a leading Brazilian news magazine, Reuters is reporting that Aparecida Schunck was kidnapped in Sao Paulo and criminals are demanding $36.5 million. More from the Reuters report.

Ecclestone, whom Forbes magazine estimates is worth $3.1 billion ― along with his family - and one of the most powerful men in sport, married Flosi in 2012, three years after meeting her at the Brazilian Grand Prix.

Ecclestone, who is now 85, divorced his then wife of 25 years, Croatian model Slavica Radic, in order to marry the young Brazilian. The couple now live in England.

Kidnapping was common in Brazil a decade ago with several people seized each day, often for sums of just a few hundred dollars. A crackdown by police, including the formation of a special anti-kidnap division, reduced the number considerably, and the crime has become much rarer.

Racer X European contributor and editor of On Track Off Road, Adam Wheeler recently sat down with two-time (could have been four, really) MX2 World Champion Jeffery Herlings for an in-depth interview with the Dutch native. (Note: The interview was conducted prior to Herlings suffering a broken collarbone at the Dutch Masters.) In the interview (which starts on page 31) Herlings talks about injuries, life and his soured relationship with former KTM boss and legendary GP racer Stefan Everts. Here is a sample of the interview. You can read the entire thing here or below.

To me, it is like he [Everts] saw me as a guy that could potentially break his records or be better than him or whatever. He would tell me not to ride the bike in the winter and that I should rest for three months when I didn’t want to.

He continued: As a racer he was one of the best of all-time but on the human side…it was weird. He was my hero as a racer and I still have so much respect for what he did in his career and what he did for motorsport but as a person and towards me — I don’t know — I cannot find too many positive things to say.

TechCrunch broke the news earlier this week that Skully, the San Francisco based startup that promised a helmet with integrated heads-up-display (HUD), has ceased operations and will be closing their doors. Their website is still online, but I wouldn’t recommend purchasing anything from it. According to TechCrunch, this means that more than 3,000 people who pre-ordered the helmet may never get one—or a refund for that matter. Asphalt and Rubber said that the company, which started in 2013 and raised nearly $15 million in seed money, has only delivered 50 helmets. “As of this writing, it is understood that 50 helmets, or fewer, have made into the hands of Skully customers, VIPs, and social media evangelists. Though again, Skully has been cagey on quoting exact figures.” Two weeks ago, TechCrunch also reported “co-founders Marcus and Mitch Weller have been kicked out of the company by investors.” Here is more:

According to a source, Weller botched a possible acquisition deal with Chinese company LeSports before leaving the company last week. Another source inside the company said at the time Weller did not ruin the relationship with LeSports and that the deal might still happen now that the former CEO was out of the picture.

However, Weller counters that story, telling TechCrunch he and his brother were forced out of the company after investors disagreed with the LeSports deal he brought to the table, opting instead for an inside round. Another source familiar with the matter confirms his story that he brought in the LeSports deal but said Skully was rapidly running out of cash and it was down to the eleventh hour determining if the numbers added up.

Adding to that, we’ve been told the board thought Weller has been so difficult to deal with since leaving, they now don’t see the point in salvaging the company he started.

We’re told by a source inside the company that as of Monday, investors from Intel Capital determined it was better to just shut the whole company down instead.

...is taking the world by storm. And at the same time, it's the dumbest thing I’ve ever seen. (Kids get a free pass on this one. If you’re 18 or older, you do not.) It’s this generation's Macarena—only worse. Anyhow, Nintendo, which did not create the game, nor does it own the game (although many apparently thought they did due to the affiliation between the companies) saw their share price on the Tokyo Stock Exchange drop 17 percent on Monday. Why? Because the company revealed details on the financial stake it has in the game. Time has more:

Pokémon Go is made and distributed by Niantic, Inc., an independent company spun off from Google. Nintendo holds stakes in Niantic and owns 32% of the voting power in the Pokémon Company, which will receive a licensing fee as well as “compensation for collaboration in the development and operations of the application,” according to the statement. But the company won’t receive a direct income from Pokémon Go, which is forecast to make $3 billion within the next two years, by one estimate.

Nintendo’s market capitalization approximately doubled in recent days amid hype over the new Pokémon game. However, it had been made clear before Monday’s statement that Niantic, not Nintendo, was the primary force behind the title.

And now Ken Roczen's thoughts, which I totally agree with.

Playing Pokemon...this is stupid. over seing all these posts about that crap. this picture says a lot. ohh yeah. what comes with it. TRESPASSING, Gettig hit by cars, falling off cliffs..... better being outside doing sports than outside with your face in your phone. That my opinion. deal with it

The Austrian manufacturer will make its anticipated MotoGP debut at the final round of the world championship in Valencia later this year. At the latest MotoGP test at the Red Bull Ring in Austria, KTM was just two seconds off the leader. Test rider Mika Kallio, who will ride for the team in Valencia, talked with MotoGP.com:

“I think everyone can be really satisfied that we’re here with the others. In the end I think the lap times were on a good level, quite good,” said Kallio who has been leading development on the RC16. “We tried to follow the others and see how the bike is behaving and where we are losing compared to them.”

“Around two seconds behind the fastest guys, at the moment it’s quite good. We still have time to work before we come to the Valencia race,” Kallio confirming the rumours about KTM’s race debut. KTM are not the first to wildcard before their full-time return, Suzuki also used the Valencia GP in 2014 as chance to compare themselves to the established order.

KTM will then set its sights on off-season testing and a full 2017 season with Bradley Smith and Pol Espargaro.

Yahoo has sold its core internet business for around $4.83 billion in straight cash, homey, to telecom giant Verizon. The deal is yet another sign that Verizon is trying to diversify; the deal comes a year after they purchased AOL for $4.4 billion. $4.8 billion is certainly a ton of cash, but Yahoo was once estimated to be worth $125 billion. So, there’s that. More from Business Insider:

Yahoo will be merged with Verizon's AOL unit under Marni Walden, the executive vice president and president of product innovation and new businesses.

It will double Verizon's digital advertising business, which is now poised to reach an estimated 4.5% share of the US internet advertising market, according to eMarketer. It will place Verizon in a distant third place, in terms of US digital ad market share, to Facebook (17%) and Google (36%).

Beyond his web series, Valentino Rossi has signed with camera giant GoPro, in what is surly to be a great thing for motorcycle fans. You can find the first video below. Does this mean more MotoGP stuff from Rossi? Maybe, but Dorna is pretty tight when it comes to video footage. We’ll see. Either way, this is going to be cool.

We end Word On… this week on a somber note. On Monday, renowned land speed motorcycle rider Sam Wheeler died due to traumatic injuries suffered in a testing accident at Utah’s famed Bonneville Salt Flats. He was 72. According to multiple reports, Wheeler was travelling 200 mph when he fishtailed and went airborne. He passed away at Intermountain Medical Center in Murray, Utah. Fox Sports has more:

Wheeler, an engineer from Arcadia, California, was known as an innovator and pioneer in the sport. He spent more than two decades building, fine-tuning and racing a motorcycle on which he reached speeds exceeding 300 mph, said Pat McDowell, a fellow racer and longtime friend. At one time, he held the land speed record for motorcycles, he said.

Wheeler was testing the motorcycle this week in anticipation of two big races in August and September at the Salt Flats. The site brings racers from around the country to use the flat, glass-like surface to set speed records.

Our thoughts and condolences are with the Wheeler family.