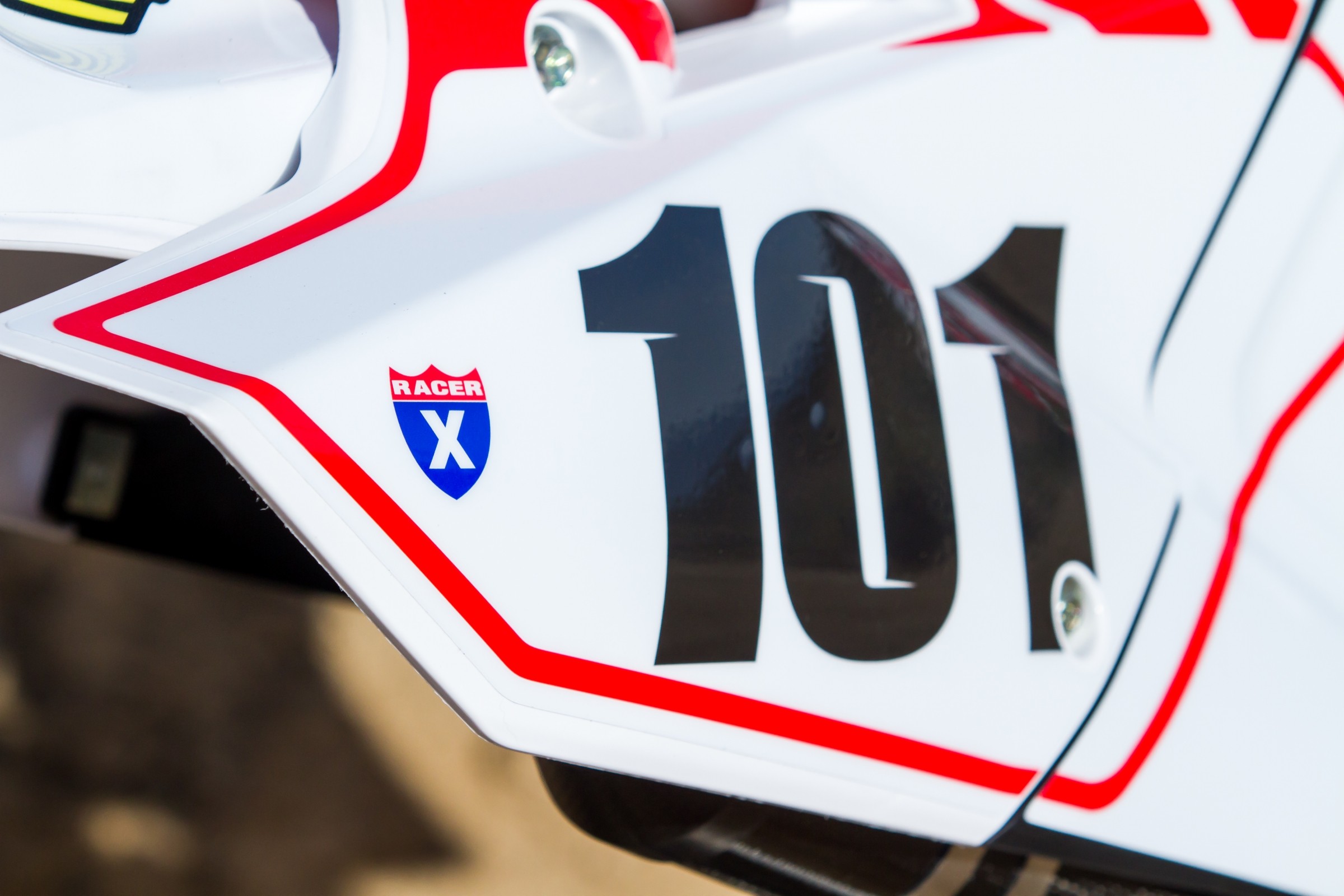 I ride a 2015 CRF450R and have been paying more attention to my bike set up lately and experimenting with sag heights and clicker adjustments to find a set up that I’m comfortable with. In the past I’ve just set the sag to the manufacturer’s specs and ran with it but it’s been an interesting exercise to see how the bike reacts to certain changes (both chassis and suspension).

I’ve heard you mention that you like to run your bike so it’s set up lower in the rear end (I’ve heard this comment from a few pro’s as well). Does this mean that you run a higher than recommended sag number or are you just running the sag at the maximum recommended height? It’d be interesting to know.

I’ve always run my bikes slightly lower in the back end and I think it is because I’m on the, ahem, shorter side. When I hit a kicker bump, a steep jump or a set of whoops I don’t have the leg clearance a taller rider has and by dropping the back down I give myself a little more room. Typically I just add a millimeter or two of extra sag, though you can open the high-speed compression adjuster a quarter or a half turn and get the bike to squat more as well. The downside to lowering the rear is that the bike won’t steer as quickly and it can decrease front end traction in turns, depending on the bike. If time and resources aren’t an issue the best way to get the same results is to lower the sub frame. Most teams I rode for did this and while the end result is great, it’s a pain in the ass. Exhausts systems have to be modified, plastics don’t fit right and the rear tire practically wears a hole through the back fender. Whatever it takes to win, right? If you feel like your seat kicks you in the butt too often try adding a little sag and see how it works.

First I wanted to say thanks for the sarcastic and passive aggressive article each week. I get a good laugh every time I read something you write. Now, on to the business...

We always hear about racers complaining that this sport needs to be safer. Recently there have been some good advancements in safety gear. I remember reading about a little black box a while ago, like the ones in Formula 1, which would record G-forces and speeds in the event of a crash. I know some people began running them, but haven't seen them in a while. Why wouldn't they run everything they possibly could in order to make this sport just a bit safer?

Thanks for the insider info,
The overly safe racer

I haven’t seen those devices used in motocross, but I know road racers have used them. But, honestly, we don’t need more details on the forces created when a rider hits the ground. We’ve got riders getting knocked out left and right like Deebo from Friday. The problem isn’t that we don’t have enough data… it’s gravity. And the fact that riders refuse to wear chest protectors because they don’t look “cool.” It’s also the fact that, until the last few years, helmets weren’t evolving at the same pace that bikes and tracks were. Have you been to a local track lately? There are little kids without one single pubic hair jumping things on mini bikes that would make Evel Knievel shit his pants. And a 450 can come out of a turn in second gear and jump 100 feet, regardless of how little talent the pilot possesses. Like hard boiled eggs and beans before a church service, this is a recipe for disaster. The new TLD helmet has raised the bar for safety and others will follow suit. Chest protectors that fit under the jersey are getting better as well and provide protection to the most critical area of your body in a crash. Aside from your head, a blow to the torso is the one thing that can kill you if you don’t protect it. Broken legs, arms, wrists and blown out joints hurt but you will live to ride another day. Take a handlebar to the gut hard with nothing but a jersey on, though, and you better have your personal affairs in order. Research the best equipment out there and wear all the protective gear you can. It may be less comfortable but it beats surgery.

Two things have occurred to me in the last 24 hours that have me concerned about my plans to end a five-year hiatus from MX. The first happened last night as I attempted to coast my daughters Razor scooter the distance of a couple houses and nearly looped it. I mean a completely unexpected, progressively long, Villopoto in Italy, time-to-retire loop-out.

The second incident of concern occurred this morning as I got severe arm pump while flossing my teeth. I made it through the upper half of the moto, uh, the floss process, and then my forearms locked up as I was railing my lower molar. I had to immediately pull thread as I knew I'd come up short on the gap between my second bicuspid and the lateral incisor. That being said, and me being a 47-year old cubicle-lush, do you suppose I might need to abandon my fantasy of riding/racing again and perhaps pursue a less rigorous and dangerous form of recreation? Maybe abbreviated games of 'horse' or 30 second sprints on our outdoor swing set? Please advise. I feel I'm about to enter my third mid-life crisis.

Your third mid-life crisis? Does that mean you already have a Porsche 911 turbo and hair plugs? Look, you really have two options at this point: You can throw in the towel and succumb to a sedentary lifestyle like millions of other television-watching, chicken wing-eating, beer-chugging sports fans across the globe that are racing towards type-2 diabetes like it’s their own personal end-zone. Or, alternatively, you can pull your balls out of your pocket and find a type of racing that suits your age/ability/budget and continue to do what you love. Just because your erections have gone softer than Justin Bogle’s voice on a first date doesn’t mean you can’t race motocross well into your fifties and sixties.

There are really great vintage series out there, off-road racing, enduro and even vet racing organizations like the Over the Hill Gang that put together really fun events with a focus on fun and safety. I can’t guarantee you won’t get arm pump in any of these events but you damn sure will have a good time. Now, go get your manhood back, Steven. And try not to loop out.