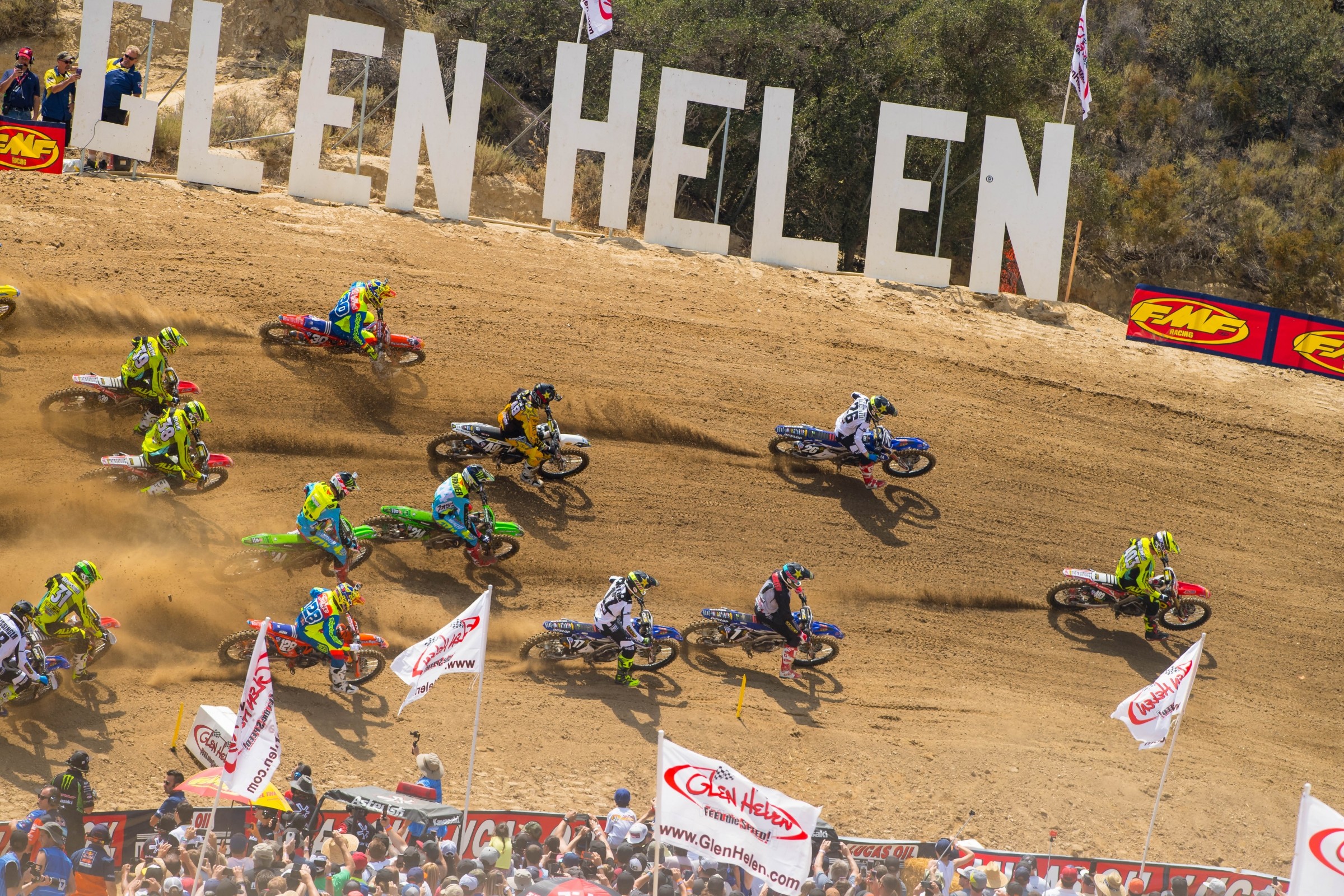 Memorial Day weekend is the celebration of all things motorsports and all things America. We mark it here with the Indy 500 and NASCAR’s longest race, the Coca-Cola 600 in NASCAR central Charlotte, North Carolina. But the craziest thing is that Formula 1’s biggest race, the Monaco Grand Prix, also takes place during one of America’s biggest holiday weekends even though there’s zero American connection there. Hardcore motorsports types can watch Monaco in the morning, Indy in the afternoon, and then NASCAR by night. It is, without question, the biggest weekend in motorsports.

Motocross has a little role in this. Our old tradition was the raucous crowd and weather of the High Point National, but the team travel pattern has pushed the march east back a few weeks. These days we celebrate Memorial Day weekend at the heart of MX in SoCal at Glen Helen. Hey, if IndyCar is racing in Indianapolis and NASCAR is racing in Charlotte, dropping the gates in California isn’t a bad fit, right? And while no motocross or supercross race will ever be as big as the Indianapolis 500, which packed something like 350,000 people this year (seriously!) for its 100th anniversary, our little deal has at least one thing going for it: it’s bad ass.

It’s just something you take for granted, but pro motocross races point out the amazement of dirt bikes if you just step back and look from a distance. A week ago we were giving Glen Helen some crap for the jumps being too big and the track being too fast, but the place sure is a showcase for what these machines and riders can do. Do you realize that those hills, which every rider did on every lap (save for poor Anthony Rodriguez and whoever he hit), are practically impassable by most vehicles? I was fortunate enough to get a ride to the top of Mount St. Helen’s from MX Sports’ John Ayers, who strapped me into the passenger seat of a four-wheel drive Kawasaki Teryx UTV. This is a bad ass off-road machine, and this one had an extra beefy set of tires swapped onto it. Right now there are people in the woods somewhere climbing hills and rocks, and swamping through mud thinking you can’t get any gnarlier than what this machine can do.

John put the Teryx into four-wheel drive and locked the front differential and put his foot to the floor, the 783cc twin pulling with all its might to get us over the top. We made it, and the elation of getting it done without getting stuck, pushed, sliding back down or rolling over was surprisingly strong. We were rewarded with an incredible view from up there. I could not believe how high that hill was. Seriously, it was so fun that Kawasaki should start charging admission for a Mount St. Helens ride along program.

Here’s the thing: simply climbing the hill was a big deal for us. It was a good test of the machine’s capability. Meanwhile, the dudes on dirt bikes were racing while going up the hill! This wasn’t an AMA Hillclimb or the Erzbergrodeo or the Blackwater 100, it was just a damned motocross track that happened to have a massive hill as an obstacle. Everyone powered up, no problem, even the privateers and even the guys who weren’t fast enough to qualify. What’s a challenge to anything else is just an afterthought to the motocross set.

The new triple jump in the back is one of the few leaps big enough to actually give the top riders some pause. Now that we’ve got some data on these bikes we know they were hitting 70 mph on the straight, and had to actually slow down to about 60 to not overjump the 170-ish foot gap. Yup, they could have jumped even further if they had to. Is this the 230 mph of the Indy 500? It is not, but it is interstate highway speeds while approaching a 170-foot jump. This is not something anyone else would attempt in any other vehicle, and if someone did, the jump itself would be the entire show. This would be Red Bull’s New Year No Limits, this would be X Games, this would be Evel Knievel.

It is just in a day’s work for motocrossers. It was just one obstacle on one lap of one race. Again, everyone on race day, even the privateers and the guys who didn’t qualify, where jumping it. Scary? Yes. Big? Yes. Doable? Absolutely.

The best part is that these obstacles aren’t the ones that really separate the pack. Motocross ultimately comes down to the fundamentals: corners, line selection, fitness and mistakes. And while not every motocross race produces a down-to-the-wire last lap fight to the finish, the races are generally good. You can pass all over a motocross track. Many motorsports, as soon as they get away from something simple like an oval, also get away from passing.

Monoco, for all its shine, is also about the worst as far as passing is concerned. The Red Bull Rallycross series is gaining some steam as a sort of cars-meet-MX deal, but passing is tough on those tracks, so they have to incorporate a Joker Lane section with a jump to mix it up. I like the Joker Lane gimmick at the Monster Energy Cup, but I recognize it’s not needed for passing at most dirt bike races.

In fact, we saw riders passing each other while going up and down those huge hills and over those big jumps at Glen Helen. Actually seemed pretty normal at that time. But when taken from a higher viewpoint—like the one I got on top of Mount St. Helens—you realize these kind of heroics are the stuff any other sport would love to have.