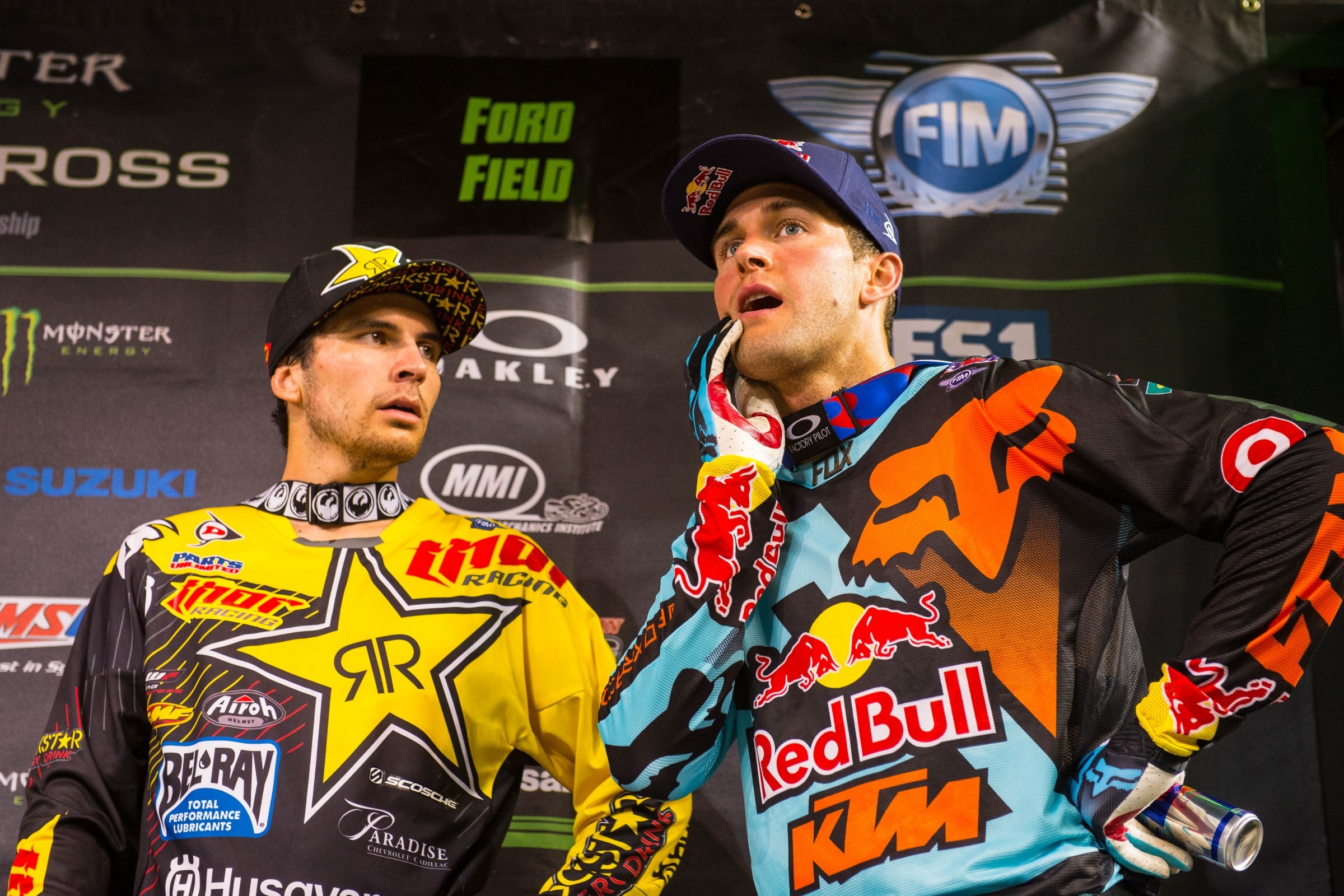 The Detroit round of Monster Energy Supercross had such a typical ending—Ryan Dungey wins again. But an hour later word started to stir that something very atypical was about to happen, and Dungey was going to be penalized two spots for jumping during a red cross flag. That pushed him from first to third, and moved second-place Jason Anderson to the win.

By the time this became official, the riders were gone (we actually saw Anderson briefly in the hotel elevator) so we never got to ask them about this scenario. So here’s what Anderson and Dungey said next to the podium, just before the race ended, and before the penalty became known even to them.

Racer X: They got something in the water down there at Baker’s Factory? You guys went 1, 2, 3.
Jason Anderson: Yeah, for sure. That was the first time that’s happened—ever. It was definitely cool to see all training partners, dudes that we ride together with all week, hold it off and went 1, 2, 3. That’s pretty badass.

You’ve definitely had speed. Starts weren’t bad but you know you weren’t right up front. Do you think you have the speed to hold the lead if you were to get one of the starts?
Yeah, if I feel like if I get a start and get up front I could run the pace of those guys and hopefully capitalize on mistakes. That’s kind of what I did tonight with Marvin [Musquin] falling. But definitely felt good.

What were your stronger suits on the track tonight? There were a couple difficult sections.
I would say the whoops was the easiest place to make up time. Then before the finish I had a little rhythm deal that was helping me out.

You couldn’t tell from the stands or really on TV much, but those things got cupped out. There were a lot of rocks, too.
Yeah, they weren’t big but they were just super cupped out.

A lot of guys were jumping through as opposed to skimming. Did that help get a better drive?
Yeah, I didn’t jump through all night. I just kept skimming. It was kind of what I did when I started and I felt really good and comfortable doing that, so it’s what I kept doing.

Tonight was a tricky track. That start was going to be really critical. I knew obviously with the whoops as well, if we could get through that clean 20 laps we’d be in good shape, and we did. The guys at Red Bull KTM did a good job setting everything up. We tried a couple clickers. We were adjusting quite a bit throughout the day, but we were able to find a good setting and then just go from there and not have to touch it in the night show. So that was good. Got some good starts, good laps. It was nice to get a heat win and then a good holeshot in the main and then get a main event win. Those are always exciting to celebrate and enjoy, and especially going into a couple weeks off. Very excited.

Talk about that first lap with you and Marvin back and forth. It was really close over in this corner.
Yeah, we were both going for it. It’s just what it is. That’s the thing; we race each other hard and clean and that’s what we do during the week as well. So we push each other. It kind of felt just like at home in Florida. I was able to get a clean run through the whoops, and then it wasn’t easy after that. Marvin actually started picking it up and dropped his lap time, identical [to me]. And he was a little faster at times, a tenth or two. He picked it up in the whoops, so we were able to clean it up a little. I had to be on it. So we were able to kind of keep things good. With that pressure on us we had to be really smart and no mistakes. I was able to find some good lines and just get some power to the ground.

Talk about those whoops.
They were tough. All day, that was probably the trickiest section of the whole track. Just trying to be the most consistent through it. The first set we were jumping, so that was a little bit better than skimming, but in the second set they were really cupped out, edged. But I found a good line and I just stuck to it, and then just tried to keep easy on the gas and let the tire do the job and the bike. The guys did a good job making it easy on us.

This is the driest we’ve seen.
Yeah. I think Detroit was a little bit drier even last year. The dirt, I don’t know for what reason but it gets really rock hard, but it’s just the way it gets here. Everybody’s got to deal with it. Drier conditions but those are the toughest conditions to get the most traction, obviously. You want to go softer but you don’t want to go too soft, so there’s such a fine line today of just trying to get things figured out right.

This season it looks like you’re having more fun than I’ve seen you have in a while.
It’s definitely tough. I think at this level you have to enjoy it at some point. It can’t just all be… yeah, you got into it because it was fun and you enjoyed it in the beginning but you’ve got to keep that enjoyment and so forth. So yeah, I’m enjoying it. I’ve got a good group of people around me, between the team and then my family and my wife, and my training partners with Aldon at the Baker’s Factory. We push each other and we have a good time as well, but we work hard at the same time. It’s really fortunate to work with a good group of people like that. You want to be surrounded by good people as well.

Enjoying yourself probably isn’t hard when you’re winning.
Well, yeah. You’ve got to understand we work hard, and there’s a lot of stress that goes into winning races and doing this at this level. But it is what you get paid to do. The team doesn’t pay to get fifth and fourth. Ideally we’re out there for one goal and that’s the win, and then long term [points] as well. I think winning is definitely nice, so that’s where you’ve got to make the most of it, make the most of those moments when you get here not to let that go.

You’ve been breaking some records recently. Did you ever really see yourself being in this position when you were racing the schoolboy class at Loretta’s?
Well, I hoped. I think as a little kid… Me and my dad were talking last week. It’s kind of short-lived, the celebration of the record let’s say, but if you take a second to stop and look back, we’d have dreamed to be in a position to break a record. I didn’t even know we were approaching a record until the start of this year. We weren’t even worried about it, and it just so happened to work out. That’s great and obviously in-between the work that goes into winning races, we’ve got to take a step back and realize what a fortunate position we are in and how hard we’ve worked to get to this position. That’s like I was telling you, I need to make the most of it and have fun, enjoy it, and work hard and not let it pass without giving it your all.