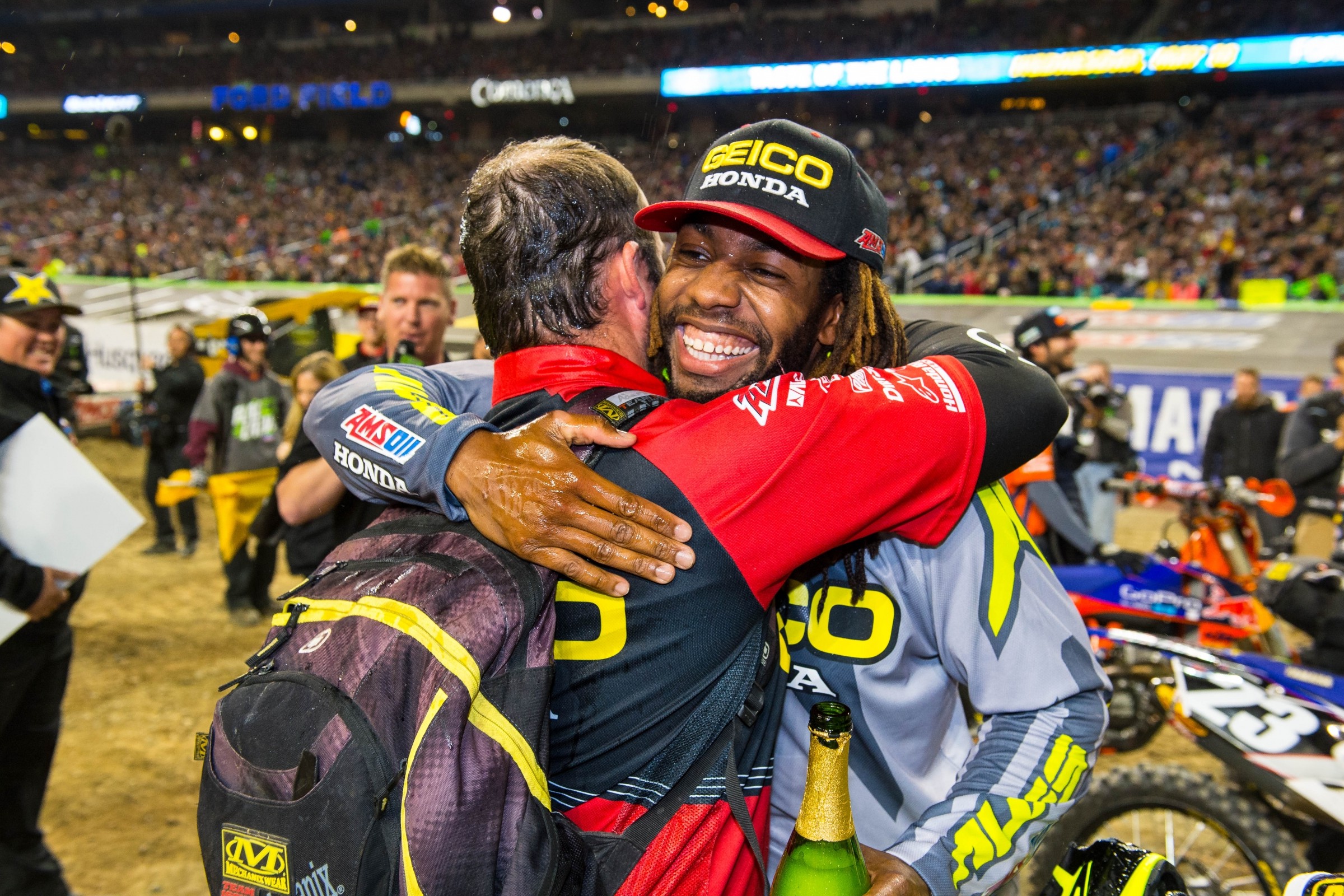 A week ago Malcolm Stewart left Toronto battered and bruised after a brutal first turn crash. But then he told us, “I worked too hard in the offseason, and the team knows that I want to win. They know. If anything they came back with smiles on their faces just because they know that you rode like a champion. That’s what’s going to get you wins. Once you get the ball rolling there ain’t going to be nobody to stop you. That’s my positive energy leaving this. Get a win in Detroit, regroup, and go from there.”

Well, that’s exactly what he did, winning on Saturday and even taking the points lead, in a wild 250SX East Region Championship. (Justin Hill crashed out of Detroit in practice and Jeremy Martin crashed in the first turn—and then again—to finish thirteenth.) Suddenly Malcolm, once known for being fast but also for bouts with inconsistency, is starting to look like the most solid pick in the series.

Racer X: First off, congrats on the win. Obviously looked pretty happy out there after you crossed the finish line. You had the speed all day from the get-go. How’d you just put it all together?
Malcolm Stewart: It was one of those ones that you feel good and just hope for the best. It was a clean sweep [with fastest in practice and winning the main]. I can’t thank GEICO Honda enough for that. It was one of those things where it’s all about having fun and I’m glad that I got it over with. It sucked for [Jeremy] Martin to go down like that, as well as for [Justin] Hill. I hope he comes back. You never want to see those guys out or anything like that. And definitely it’s good to see Martin [Davalos] come back as well. It’s one of those things. We’re going to take a couple of weeks off and then get back at it. We’ve got five more races to go, so it’s definitely going to come down all the way to Vegas for sure.

You’ve always had the speed, that’s for sure, but every once in a while there would be something small that’d kind of derail you from a win. Have you been focusing on trying to keep more consistent?
Yeah, just trying to focus on just keeping it consistent and things like that. I’m happy that my good luck is starting to happen and let’s just keep it that way. I just want to keep building from here. It’s not over yet. We still got a lot of racing to go. We’ll see what we can do.

Is that red plate going to be a little bit heavier now?
[Laughs] No, not at all because the bike’s red!

With those whoops today, it looked like a lot of people were struggling through that. Do you think it helped being a little bit taller, bigger guy to kind of manhandle through there?
The whoops got really tricky in the main event. I made a few passes. I definitely pushed it over the limit to make those passes for sure, but I made them work. I just kind of backed it off once I got in the lead and just tried to hit my marks and focus on my race and not who was behind me. I came around and I saw Martin down. For a second I thought he was winning it. I was like, wait, what? Then I saw blue flags and I was like, Oh man. That kind of blows. But at the same time I’m happy that I got the points lead and I got myself a little seven-point lead. Coming in ten back and leaving out with seven feels good. So we’re going to keep trucking along and there’s a lot of racing left.

You started behind Tonus and Plessinger this race. Were you trying to make it to the front rather quick or were you just kind of letting it come to you?
No, I was just letting it come to me because every time I force the issue I go down and made some bonehead mistakes. I knew my strongpoint was in those whoops and I knew that those guys were kind of struggling. So I just hit the left side of the whoops because I knew that was the where everybody was not hitting them, so I knew that I’m going to make it work here. And I made it work and just kept moving from there.

Was that a strategy kind of talked with the team and stuff like that?
No, that’s the reason why we get a parade lap. I just kind of mapped it out myself. This is exactly where I’m going to pass people. Everybody else was pretty much even around the track except for those whoops, so I knew that was a big part. And it’s in my favor being a tall guy, and knowing how to hit whoops, it paid off.

You were definitely one of the faster guys through there. You were also one of the few 250 riders that were hitting that quad over the step-on, step-off. Was that a lot faster going that way?
It was weird. Believe it or not, it wasn’t that much slower going over then three out, either. It wasn’t like, “Oh my gosh, this is so much faster,” but just hitting the quad in a race feels cool anyway. So even if it was even or not, hitting a quad’s cool.

Coincidentally enough, Detroit was the first round we've had the new May 2016 issue of Racer X Illustrated that features Malcolm on the cover. We ran into Malcolm and Big James in the pits earlier in the day, gave them a couple copies, and had the pleasure following up with them after earning the W. It wasn't the first time they've seen the cover, though. Back in Toronto, we dropped off a box of the May '16 cover shirts, and you can get one too by subscribing today.