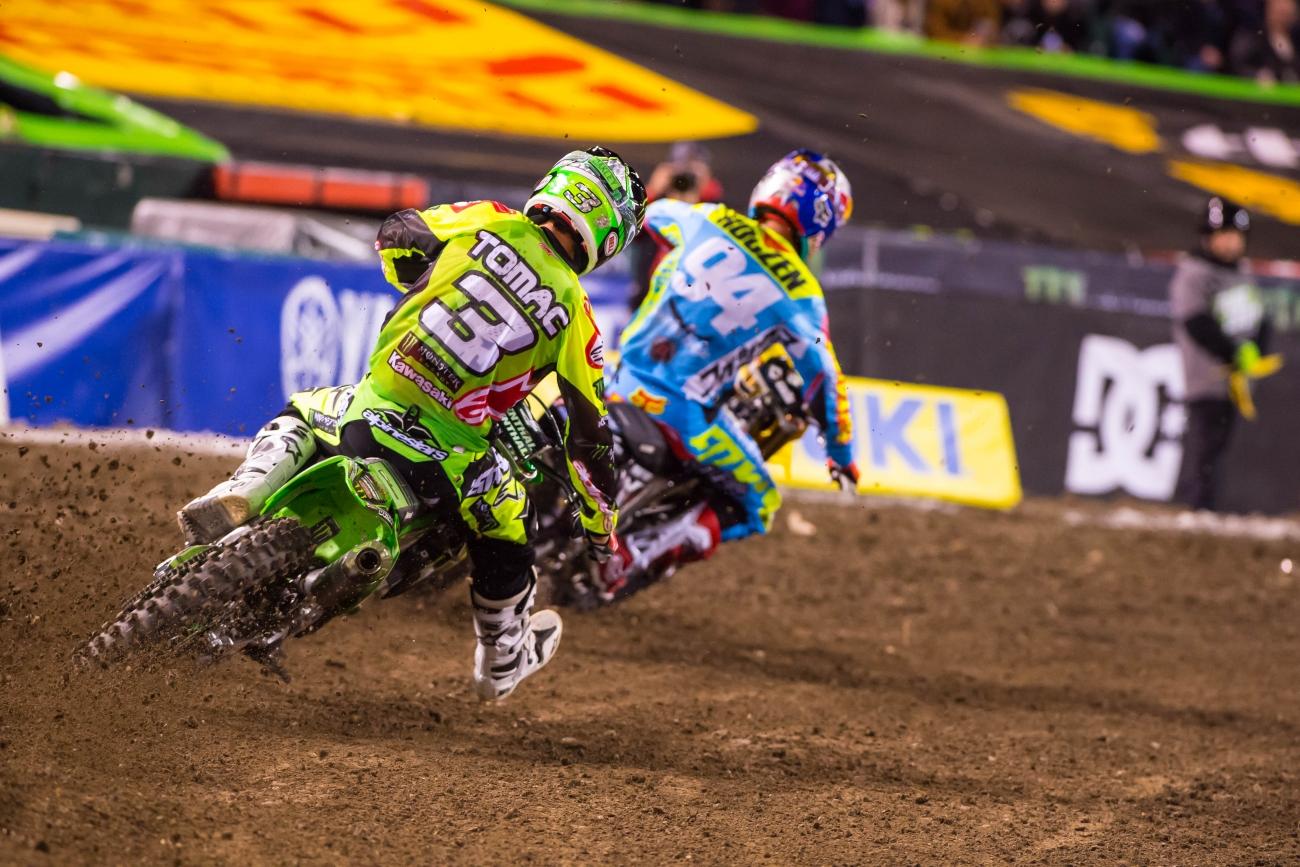 By: Jason Weigandt and Chase Stallo

Trey Canard had a couple scary moments at Anaheim. In his heat, Canard went down in the rhythm off the start and another rider landed on him. Canard quickly grabbed his wrist, invoking thoughts of another season-ending injury, but luckily he had only suffered some small cuts that required stitches. That’s good in motocross terms! Canard returned to qualify for the main, but was pushed wide and off the track by Justin Brayton early in the race. Canard decided to call it a night after that. “I’m extremely mad and disappointed in how tonight went, but it could’ve been much worse,” he said in a statement. “Other than some stiches in my hand, I’m leaving healthy for the most part, which is a blessing considering the two crashes.”

It’s a tale of two seasons in the 450SX Class. At the top end, the consistency has been remarkable, with the same six riders (Dungey, Reed, Seely, Anderson, Roczen, Tomac) finishing in the top six at all three rounds. They also represent six different brands! There have been twenty-eight riders to score points in the 450SX class so far this year, but only seven have made the top ten at every round: the aforementioned six, and BTO Sports-KTM-WPS’ Justin Brayton. It’s a much-needed move in the right direction for Brayton, who garnered just four top tens in an injury riddled first year with the team in 2015.

More good news for the BTOSports team—Davi Millsaps is currently leading the “best of the others” standings in seventh place overall. The big (and consistent) six has already begun to build a gap on the rest of the field, but Millsaps is putting together a solid comeback season.

As we mentioned in 10 Things to Watch, a big priority for Ken Roczen last week was starts. “Roughly done 300 starts in 2 days,” he wrote on Instagram last week. While Roczen got a good start in his heat, he was again forced to come from behind in the main after a poor start. Ask by Steve Matthes if starts were the missing ingredient so far is, Roczen emphatically said, “Definitely. Three rounds and I’ve just been getting bad starts. My heat race start actually wasn’t bad. We’re just going to keep working them and working them. That’s all I can do. I’m doing everything I can to be the best that I can be. That’s all I can do.”

He went on to say in a team statement that he felt he was taking steps forward and that starts will be a focus again this week. “I practiced a lot of starts (last week) and feel pretty comfortable. Obviously, it didn’t happen in the main but we’re going to keep working on that because I think that’s what is holding me back from being at the very top.”

Roczen wasn’t the only contender hampered by the start. Jason Anderson, Cole Seely and Eli Tomac were all tenth or worse off the start. Seely, who finished on the podium at the first two rounds, got the worst of it, finishing sixth. “After tonight’s main-event result, I’m not too stoked,” he said in a statement. “I had to do some major damage control after a bad start, a hectic first three or four laps and a little mishap, but I was able to come from outside the top ten to sixth. I guess I can’t complain about that too much, but I really wanted to get more points for the championship.”

Anderson, the Anaheim 1 winner, couldn’t quite find the same magic at Angel Stadium this time. He finished fifth on the night. "Tonight was not the greatest, but also not the worst,” he said in a team statement. “I got fifth which is nothing to be bummed on. Just gonna come into next weekend and try and get back on the podium."

It would appear Ryan Dungey was the fastest man in Anaheim, but Eli Tomac and Ken Roczen logged the best times—and you already read about their bad starts above. You can trace Tomac’s entire night back to practice. Eli told our Steve Matthes there were only about three good gates to choose from in Anaheim. Well, Eli qualified seventh and had the fourth gate pick in his heat, he started behind Dungey and Roczen and finished third. That gave him the fifth pick in the main. No bueno.

“Yeah, the start, once again it’s like you’ve got to get top two in your heat race to get the good starting pad,” said Tomac. “All of our gates are pretty jacked, and that’s what I’m going to blame it on, although I probably shouldn’t. The line coming out of the gate is so important and there were probably only three good gates and they get taken up.”

Tomac has been the picture of consistency this year—he’s literally finished fourth at all three races! But Anaheim 2 was his best performance yet. “Big improvement on the race side of things, at least I was a podium-speed guy,” said Tomac.

The kids are fast, but that old salty dog Chad Reed has some tricks too. Tomac caught Reed and then Chad pulled out a triple-triple combo in a rhythm lane. “I never saw anyone do it during the day, and the sucker pulls it out on lap eight!” said Tomac with a laugh. “I was like holy crap!”

On lap seven, Reed ran a 58.7. That wasn’t going to cut it, so on lap eight, he busted the triple-triple and went 58.3, and then he logged his best lap, 57.9, on lap nine. In fact, Reed held under the 58.7 mark all the way through lap 15, when he hit a 58.8. That helped him weather the storm from Tomac and Roczen for a while. Eli and Kenny regrouped for one last push, both logging blazing 57.7s on lap 18, while Reed and Dungey were in the 59s. But Roczen bobbled on lap 19, running a 59.9, and Tomac crashed on the last lap, running a 1:07. Reed’s like that veteran pitcher in baseball—he might not have the 100 MPH heater like the kids anymore, but he knows how to throw the right pitch at the right time to get out of trouble.

Let’s get deep on segment times, which, again, provide some shocking results. And this week we stole a copy of the track map so you can see the segments! The AMA divided the track into four segments. Dungey won the race but did not set the fastest time in any segment. Anderson was fastest in segment #1, Roczen in segments #2 and #4, Millsaps in #3. Dungey had merely the fourth, eighth, sixth and third fastest times in each segment. Dunge looks faster and more aggressive than ever, but he’s still winning races through solid, consistent laps. And good starts!

Roczen is not struggling with fitness. Last week we noted that Kenny was the fastest rider in the final seven laps. This week, while making a last-ditch effort to catch Reed, he set the fastest time of the night in Segment #4…on lap 20!

Jimmy Decotis is off to a nice start in his re-birth with GEICO Honda. Through three rounds Decotis is fifth in points and has finished outside the top five only once. He had a chance to tie a career-best fourth at Anaheim 2, but lost the spot to Joey Savatgy in the waning moments of the race. “I’m struggling with the first few laps. I’m just getting eaten up, I have to work on that,” he said in a GEICO Honda team statement. “My last lap was a bad lap and Joey Savatgy got me. Fifth place is okay, but not great because it should have been fourth. I’m a little bummed on it.”

Jordon Smith wasn’t able to backup his first career podium, but sixth is another consistent finish for Smith, who tweaked his wrist in practice.  “The day for me was a little rough,” he said in a statement. “I felt good but I was just struggling a little bit in the big whoops. I crashed there in practice and kind of hurt my wrist a little bit. Overall I got out of it pretty safe and scored some points, it’s a long season and we’re all right there still. Just want to be consistent every week and put ourselves in a good position at the end of the year.”

MAD Racing/Dirt Candy Suzuki’s Luke Clout had just a few days to prepare for Round 3 of Monster Energy Supercross after flying from Australia early last week to begin his fill-in roll with the team. Clout, a former MX2 Australian motocross champion, qualified for the main event through the LCQ and finished fourteenth. “Pretty cool experience at A2, 14th overall not bad for two days on the bike. Lots of stuff to work on!,” he wrote on Instagram. “Staring down the start was an experience with 50,000 people!”

- RIDE365.com/Honda Racing’s (Crossland) Chase Marquier qualified for his first career Monster Energy Supercross main event on Saturday, finishing sixteenth. “Pretty awesome night last night making my first main event! Wish I wouldn't of had a crash off the start but it's definitely progress!!,” he wrote on Instagram. His teammate Kyle Peters finished tenth, his third straight top ten to begin the year. For a team that wasn’t expected to even race this year, this squad is off to a nice start.

- After failing to qualify for the opener, Blue Buffalo/Slater Skins/Yamaha Herrera Ranch’s Michael Leib has consecutive thirteenth place finishes. When Leib qualified for San Diego 1, it was the first 250SX main event made in the team’s short history.

- Jeff Alessi made his first 450SX main event since qualifying for Houston on March 31, 2012. He finished twentieth in the main.

- After missing all of last season due to injury, Monster Energy/Team Tedder’s Dakota Tedder qualified for his first-ever 450SX main event. He last made a main on a 250 in 2013. He finished nineteenth on the night.

- Rockwell Watches Honda’s Fredrik Noren is dealing with a leg injury and only rode the second qualifying session on Saturday. He qualified twenty-fourth, made the main through his heat, but was only able to complete five laps due to the injury.

- Through three rounds, privateer Chris Howell has already qualified for more main events in 2016 (three) than he did in all of 2015 (two). Early surprise of the year?