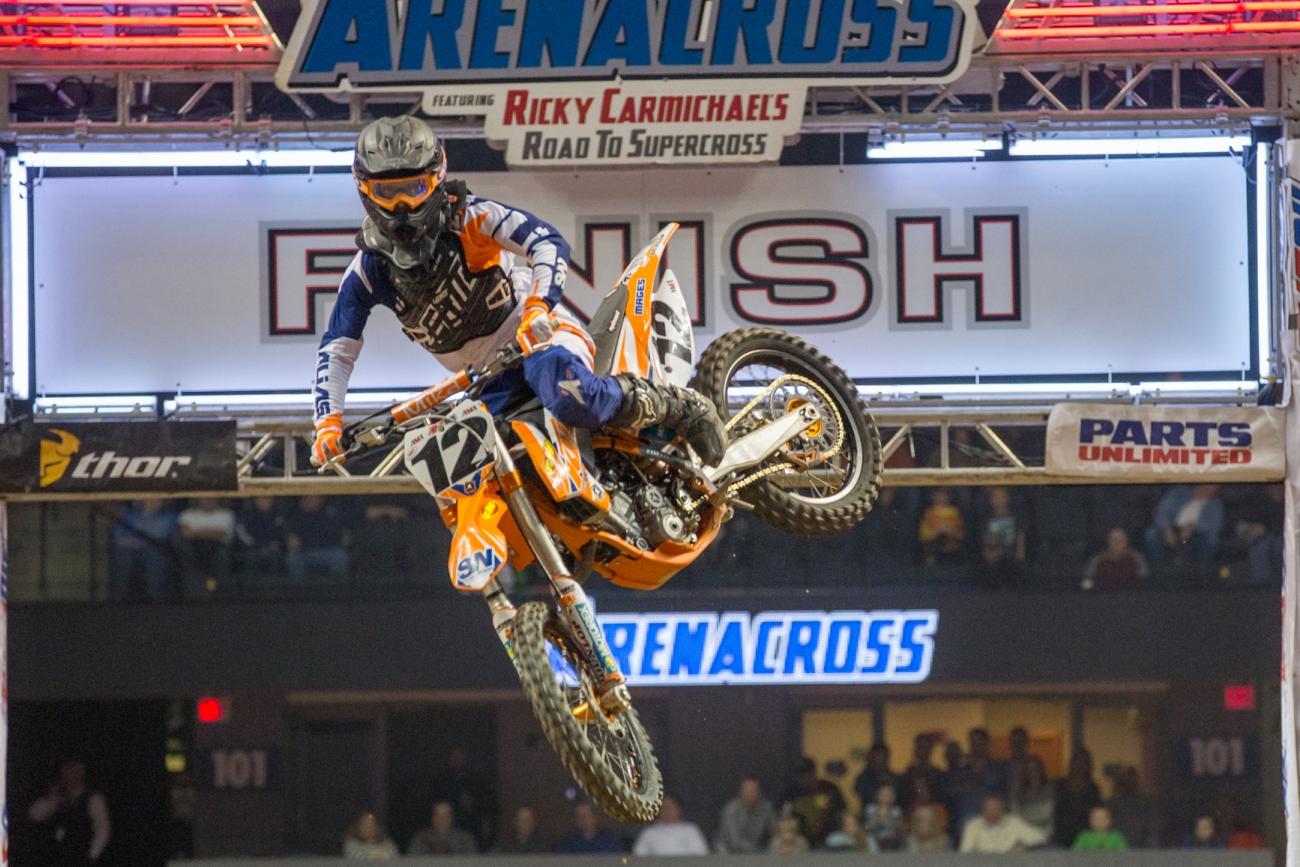 It’s not often a rider will make their supercross debut at the age of 24, but that's exactly what Steven Mages did this past season at the Las Vegas finale. For the past several years, Mages has been paying his dues in the fast-growing Amsoil Arenacross Championship.

His first full season of arenacross racing came in 2011. He sat out the 2012 season and has been a full-time staple in both classes from 2013 to present.

In the past two years, Mages has really come on strong in both classes in arenacross, scoring a seven Arenacross Lites wins and two Arenacross Class wins on his own effort. In 2015, Mages was a consistent contender and scored enough points to be a member of the Chase for the Championship with the other heavy hitters, most of them on factory-supported equipment.

He ended the 2015 tour tenth overall, and then made his supercross debut the next night. He recently signed on with Nevada-based Atlas Racing to race the 250SX West Region rounds of Monster Energy Supercross.

Mages is a self-made entrepreneur with his own clothing line—Slaka Wear—and with this deal, he will also serve as co-sponsor of the team, which will officially go by Atlas Racing/Slaka Wear KTM. Slaka Wear will provide all pit shirts and hats for the team.

As a co-sponsor, he's going to enjoy his next venture in the bigger stadiums. Mages says that most of the people on the arenacross tour wear his clothing and know his brand. His next step goes hand in hand with his current situation, as he is reaching out into other action sports as well.

Arenacross has opened many doors for Mages this off-season. He was also offered a ride from a team to contest German supercross, but respectively declined the offer to focus on Anaheim 1.

"Everyone is telling me I should do pretty well, so we'll see what it's like and how it compares to arenacross," Mages says.

Mages made his professional motocross debut in 2009 and has raced chosen East Coast rounds of the Lucas Oil Pro Motocross Championship throughout the years. His Las Vegas Supercross debut this past May was full of ups and downs. He qualified thirteenth for the night show in the 250SX Class, finished twelfth in his heat, and had a pretty bad crash in the LCQ.

"I'm going to give it my best because, if anything, I can always go back to arenacross. I'm always welcome there."

The Ohioan, who just turned 25, has waited to make the jump to supercross because of lack of support. He decided to race Las Vegas because he was already in town to wrap up a solid tenth place in the Arenacross Class standings.

"Until now no one has really offered the right amount [of support] for it to actually happen and make it worthwhile," Mages admits.

The sport has seen a lot of riders jump up to the big show from the smaller stadiums and do pretty well. Most recently, three-time arenacross champion Tyler Bowers moved to Monster Energy Supercross last year with Monster Energy/Pro Circuit Kawasaki, and Gared Steinke shined on his two-stroke this summer in the Lucas Oil Pro Motocross Championship.

Mages says that he is going to move from his home in Ohio to Escondido in about a week. He will stay on the West Coast for about six months. Mages has lived temporarily in California before while prepping for arenacross—though he didn't do that this past season—so this switch won’t be new for him.

As far as goals go for Mages, he's keeping an open mind. His first goal is to just qualify for Anaheim 1, and then he wants to work his way into the top ten quickly.

"I'm going to give it my best because, if anything, I can always go back to arenacross," Mages says. "I'm always welcome there."

With some supercross experience to his credit, Mages feels ready and confident. He's happy that he doesn’t have to work full time at an auto-body shop anymore, which will give him more time to focus on the task at hand. He’s got two jobs to focus on right now: getting Slaka Wear to the next level, and, most importantly, living out his childhood aspiration of racing supercross.

"It's hard to go away from arenacross because I know it so well, but that's a part of growing," he says. "It's time to go to supercross and live the dream."