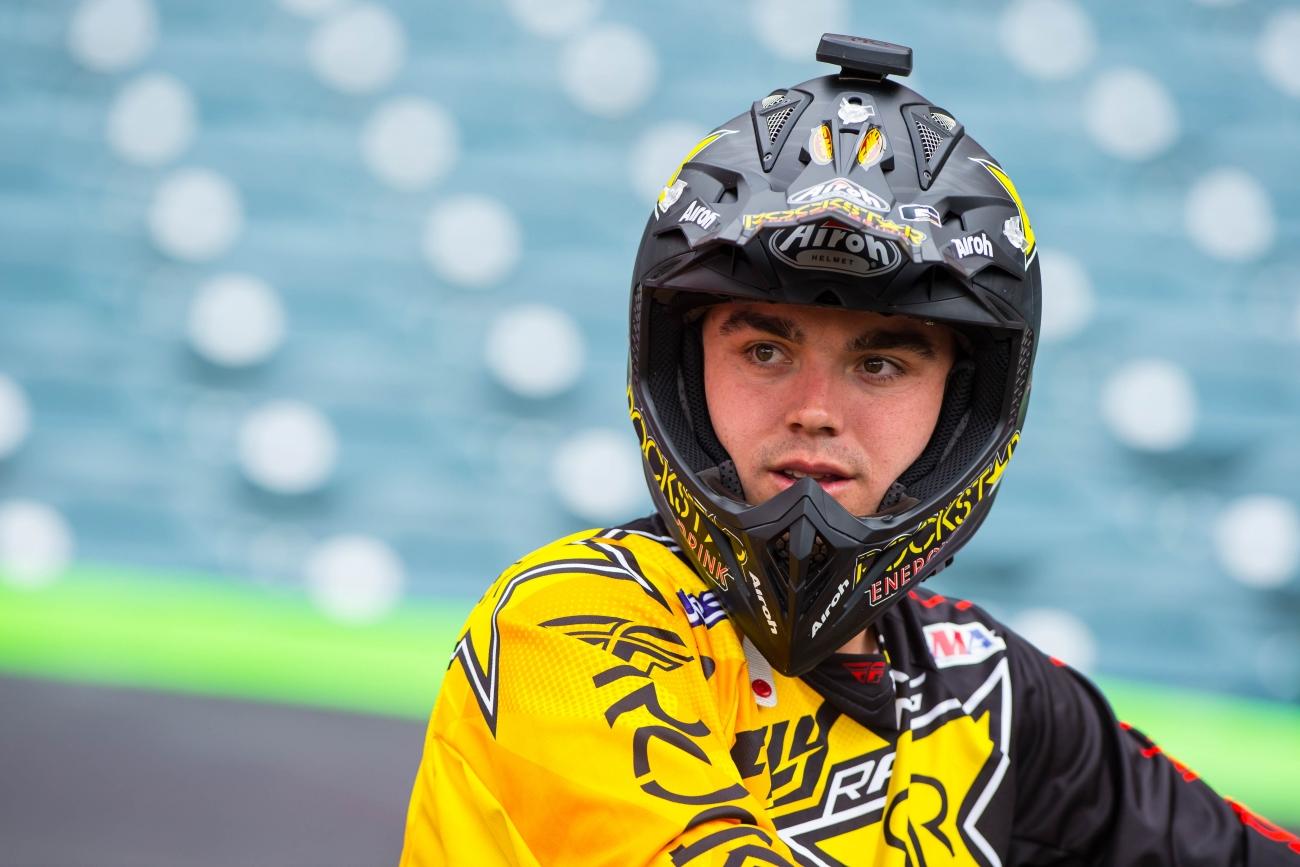 250 Words Not Giving Him An Inch

Everyone is trying to figure out a way to beat Cooper Webb, who has been perfect thus far, starting the year with three consecutive wins. It hasn’t been due to lack of effort from the other riders in the field. We saw Troy Lee Designs/Red Bull KTM’s Jessy Nelson put up a fight at Anaheim 1. Rockstar Energy Husqvarna Factory Racing’s Zach Osborne tried at San Diego 1. GEICO Honda’s Christian Craig battled him at Anaheim 2.

A big target has been put on Webb’s back and so far no one has been able to hit the bullseye in the main event. The target has become so big that instead of referring to Webb by name, some are starting to simply refer to him as “number one.”

After A2, Christian Craig told us, “We’re all chasing that number one and he’s killing it right now. I’ve got respect for him and we’ve got to stop that win streak.”

“There’s no better feeling—it’s all learning for me,” he said in his interview on FS1. “I got to battle with the number one.”

The other riders in the field are not happy with Webb’s dominance. In San Diego, Monster Energy/Pro Circuit Kawasaki’s Joey Savatgy stated in his podium interview, “I’m not happy with second. I mean, we were up here a lot last year with thirds and that’s good, but man, we’re close. Honestly, that was my race to lose…first is always a lot better than second, but I’ll take it.”

In San Diego, Webb saw an opening and quickly jumped inside of Osborne. Osborne unsuccessfully tried to answer right back in the following corner. Why did Osborne react so quickly? “He came in there pretty hot,” Osborne told us. “I maybe should have been a little more aggressive or even waited to go through the whoops and then into that turn, but I wanted to answer quick because I didn’t want him to feel like just owned me and was just going to carry on so I wanted to through it back in there.”

Craig has a similar thought process—don’t let Webb blow by without a fight. “I think I led ten [laps] and then Cooper started catching me,” said Craig. “Then went back and forth there for a couple laps. I wasn’t going to let him pass me so easy. He put me high a couple times and I put him a couple times. I think I hit his bike one time, but it was with my back wheel. It wasn’t on purpose. And then I squared him up and passed him back. He ended up pushing me out by the Tuff Blocks. We went back and forth. I shook his hand at the end of the race and he gave me a nod.”

Sometimes a nod is all you’ll get from Webb, who shrugged it all off, not thinking anything was over the line. “No, I don’t think [so]. It was a fun race,” he told us afterwards.

Today, our Jason Thomas referenced Webb’s patience during these battles. That may also be what makes these other riders so frustrated. They’re giving it everything they’ve got and Webb is indifferent. He just does his thing and carries on.

We’re reaching the half-way point in the 250 West Region this weekend and the forecast predicts more great battles. The competition clearly isn’t going to roll over, but can they end the streak? We’ll just have to wait and see.