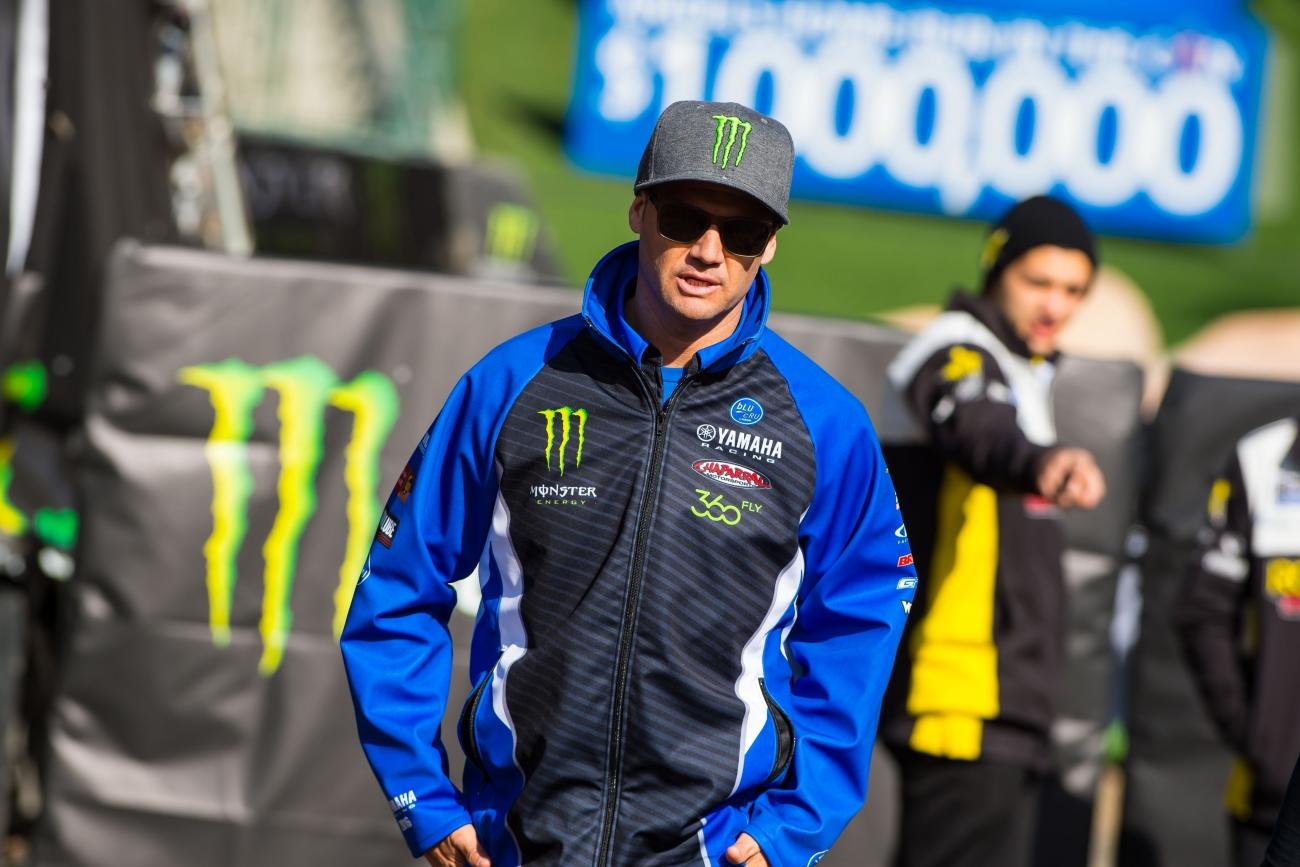 It took Ryan Dungey four rounds get the points lead in 2015; it’s taken him half that time this year. When he got his hands on the red plate last season, he didn’t let go. The season just started so no one is handing Dungey the title just yet, but giving the red plate to one of the most consistent riders in supercross history is a dangerous thing. Fifteen races left, and it’s already time for everyone else to rebound! – Aaron Hansel

Monster Energy/360Fly/Chaparral/Yamaha Factory Racing’s Chad Reed took second last week in San Diego, but at the podium, and later in the pits, Reed and the Yamaha guys were so pumped it was almost like Reed had taken the win. He nearly could have too! If Dungey hadn’t executed a near-flawless twenty laps Reed would have been right there for the win. Remember a few years ago when everyone was saying a happy Reed equals a fast Reed? Well, he’s happy right now, and he just might be even happier after the weekend. – Hansel

Want a good pick for your fantasy team? Look no further than Colt Nichols. The CycleTrader.com/Rock River Yamaha rider came into the season under the radar, but if he keeps riding like he did in San Diego he’s going to start getting some attention—he led laps in his heat, eventually finishing second, and landed in a solid fifth place in the main. Let’s see how this developing story plays out in Angel Stadium. - Hansel

Speaking of strong, quiet performances, how about GEICO Honda’s Jordon Smith? We’re not going to go so far as to say he’s under the radar, but we’re also willing to bet you didn’t know he’s currently sitting second in points. He had a great night last week too, nabbing the holeshot, leading five laps (one more than Cooper Webb), and landing on the podium in third. There are a handful of guys in this class who should be on the podium in every race, and with rides like that, Smith is quickly becoming one of them. - Hansel

We’re not trying to keep the controversy going here, but that doesn’t mean we’re not going to be keeping a curious eye on Weston Peick and Vince Friese this Saturday. You can be sure FIM Race Director John Gallagher will, too. Friese has been put on permanent probation, and it’ll be Peick’s first race back after missing the first two of the season, a consequence of his haymaking actions. One would expect them both to be on their best behavior, but adrenaline and a fast-pumping heart can make for some strange decisions. We’ll see what happens if the two find each other this weekend. - Hansel

The book on young 450SX riders is typically pretty straightforward: sporadic results accompanied with flashes of brilliance. Not so in the case of Cole Seely. Only three times last year—two being the first two rounds of the series—did Seely finish outside the top ten. Seely is averaging a fourth place finish over his last twelve races dating back to last year. While his inexperience may say he won’t hold up over a seventeen round title fight, his recent results tell a different story. – Chase Stallo

Eli Tomac and Ken Roczen have combined to finish no worse than sixth in the first two rounds. That’s fine for just about anyone, but for Tomac and Roczen, missing the podium in both of the first two races equals a slow start. As we pointed out earlier this week, it’s way, way, way too early to worry about either rider dropping from the title chase. Each pointed to starts after San Diego (Tomac: “My weak point tonight was the starts.”; Roczen: “I’ve been working really hard on my starts but we need to work on the consistency.”), and rightfully so. San Diego was a tight track with few passing lanes. Roczen has been working feverishly on his starts this week (per his Instagram account). Can either take away the momentum of Dungey and claim their first win on the young season? – Stallo

For a former podium finisher, 12-8 results through two rounds may sound like a disappointment. In the case of Jake Weimer, it’s an accomplishment after an injury riddled 2015 season. After losing his spot on Factory Kawasaki in 2014, it’s been a tough road for the former 250SX champion. “I don’t think I’ve really raced that well in a while and it’s been probably better than anything I did last year,” he told Jason Weigandt following San Diego. Weimer’s slow road back seems to be just beginning. Can he back up his first top ten since Indianapolis last year with another one? - Stallo

Can anyone stop him? You know who we mean by him. Even bad starts don’t seem to matter. What else is there to say? - Stallo

Will He/Won’t He Part Deux

Another week of the James Stewart watch. Last week at this time we heard it was 80 percent likely James would race, and when he passed a concussion test, he was a go. He decided he didn’t feel right in practice, though, and chose to sit out. One would assume he’ll be okay for this Saturday, but head injuries are hard to predict. Since James’ crash with Ryan Dungey caused a red flag and full 20-lap restart at Anaheim 1, he still hasn’t completed an official lap in a SX main event since 2014. - Stallo