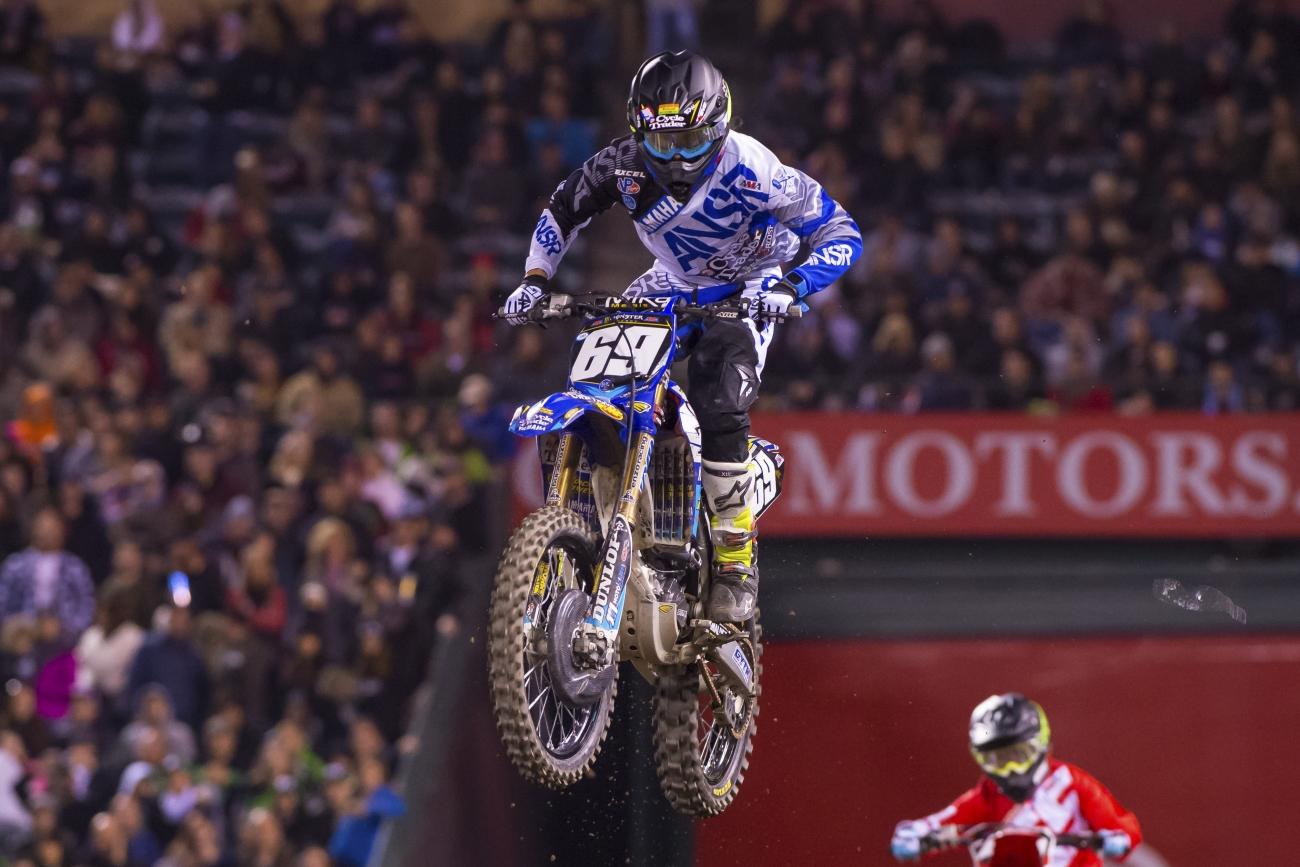 Colt Nichols' rookie season was cut short last year due to a torn ACL sustained in St. Louis. In only his fifth professional race, he’s already cracked the top five with a fifth at San Diego last week, which puts him sixth in points heading into Anaheim 2. We caught up with the CycleTrader.com/Rock River Yamaha rider at A2 press day to see how the knee is holding up and how the new team is treating him.

Racer X: You missed a lot of last year from the torn ACL. How much did that set you back?
Colt Nichols: It was definitely a big setback for me. I missed the whole outdoor series. That was a big bummer for me. I was looking forward to racing outdoors. It was unfortunate, but me and Robbie Reynard back at home in Oklahoma, we were doing a lot of therapy, pretty much every day as much as I could. The knee actually came back stronger I think than it was before. I’m really happy with the progress. I actually feel prepared this year. Last year I got hurt before the season, then got hurt during the season. It was just a little bit of a mess, just as far as my end being a little unprepared. But I think everything worked out the way it was supposed to. I’m happy with the start of the season. It’s been going good, so I actually feel prepared.

How has your recovery been? Does your knee bother still bother you?
No, actually it’s been good. It’s been really good. Like I said, we did a lot of therapy. A lot. I got hooked up with a really good physical therapist back home that specialized in sports therapy. I did all I could. I biked a lot. We did everything we could possibly do. I feel happy with the knee. It came back really good and I’m happy with it.

Some riders choose to ride with a torn ACL. What made you get it fixed right away?
Honestly, that was Robbie Reynard. He’s kind of been there, done that when it comes to injuries. He was like, “Dude, just get it fixed. It’s not worth it.” You can go race, sure. I raced that night. It happened in practice and I didn’t know anything was wrong with it. I raced all evening and then the next day it was kind of swollen up like a balloon. So three days later we ended up having surgery. I think me, Robbie, my parents, kind of everybody collectively, came together and thought it would be best to get it fixed.

Were you worried about getting a 2016 ride because of your injury?
Yes, very. I was actually really kind of worried about it. I knew I showed a little bit of potential, and just when I was starting to get the ball rolling a little bit was when I got hurt. So that was unfortunate. But the team I was with last year, there was rumors of it shutting down a little bit. They didn’t know if they were going to go race. So I was really hunting to try to figure out something. Luckily the Cycle Trader Rock River deal came together. I couldn’t be happier with where I’m at. I think I’m supposed to be here and I’m happy. The whole team and everybody has been really good to me so far. It’s been a good fit for me.

How did that deal come about?
Actually it was kind of a long process. I had talked to GEICO a little bit about that spot that they had open. Cycle Trader had actually planned on getting Jimmy Decotis. Once he went to GEICO then that spot kind of opened up and then they approached me. Robbie Reynard and Christine [Denny, team manager] are pretty good friends anyway. So they kind of collectively talked a little bit. It ended up just coming together that way. But I’m really happy it did.

Can you compare last year’s team with this year’s team a little bit?
Yeah, we were just a little behind the eight ball last year. I don’t want to throw shade at anybody. But everyone was trying to do what they could do. We were just all inexperienced. Guy Cooper was the team manager and he’d never done that before. So it was hard for him. Even the team owner, that was our first year really trying to branch out and be like a legit team. The mechanics, they were first year mechanics but they did a really great job. I was happy with everything. It got me to where I am right now, so no complaints there. But I’m just really happy with the team this year. Everybody’s been really good.

Do you feel like your second year coming in you feel more prepared? Have you done anything different than last year?
Definitely. Just kind of knowing what to do, really. Whenever you first get in there it’s new. The racing’s new. But mainly this year I had some confidence coming in. I’d been riding; I’d been training. The bike was awesome. That was the biggest thing was the bike was so good. I felt so comfortable on it that the training seemed pretty easy. To come in and actually be prepared and know that I was one of the guys and know that I could do it was a big bonus for me. Last year we kind of came in blindfolded. So this year I was definitely more prepared and more confident.

What do you think you’ve learned from last year?
Mainly just learning [about] myself a little bit. I couldn’t imagine turning pro when I was 16 years old. There’s no way I would have been ready. Learning how the process works. Learning to be a racer you have to do this stuff day in, day out, every day. You got to show up to race no matter what the circumstances are. Everybody has a laundry list of problems. It’s not just you. So to be able to learn and just be able to apply it during the week so that whenever we do show up on the weekends we’re ready. I can show up and race and feel confident in doing that. That was the biggest thing.

So how far can you go? You’ve already hit the top five. Where are you going now?
We’re definitely shooting for a podium. That’s definitely the next goal for me. That was a big goal coming in. Mainly it was to just get through the first few rounds and kind of see where we all stacked up against each other. The goal was top five for sure. Now that I’ve kind of seen some light at the end of the tunnel it’s definitely for a podium. I really think I can do that. I was really close to a podium last weekend. The seconds we were all really close. Just a good start, riding confident, getting through the first few laps good. I think a podium’s definitely in the near future.

What do you think you can do better to run further towards the front?
Mainly it’s the first few laps. Last weekend I started really well and the first two laps I got passed by a few guys. The intensity wasn’t really there like I wanted it to be. So I got to improve the first two or three laps, make sure those guys don’t get by me. Once you give up those positions it’s kind of hard to get them back. So just improving those first few laps, but just good starts.