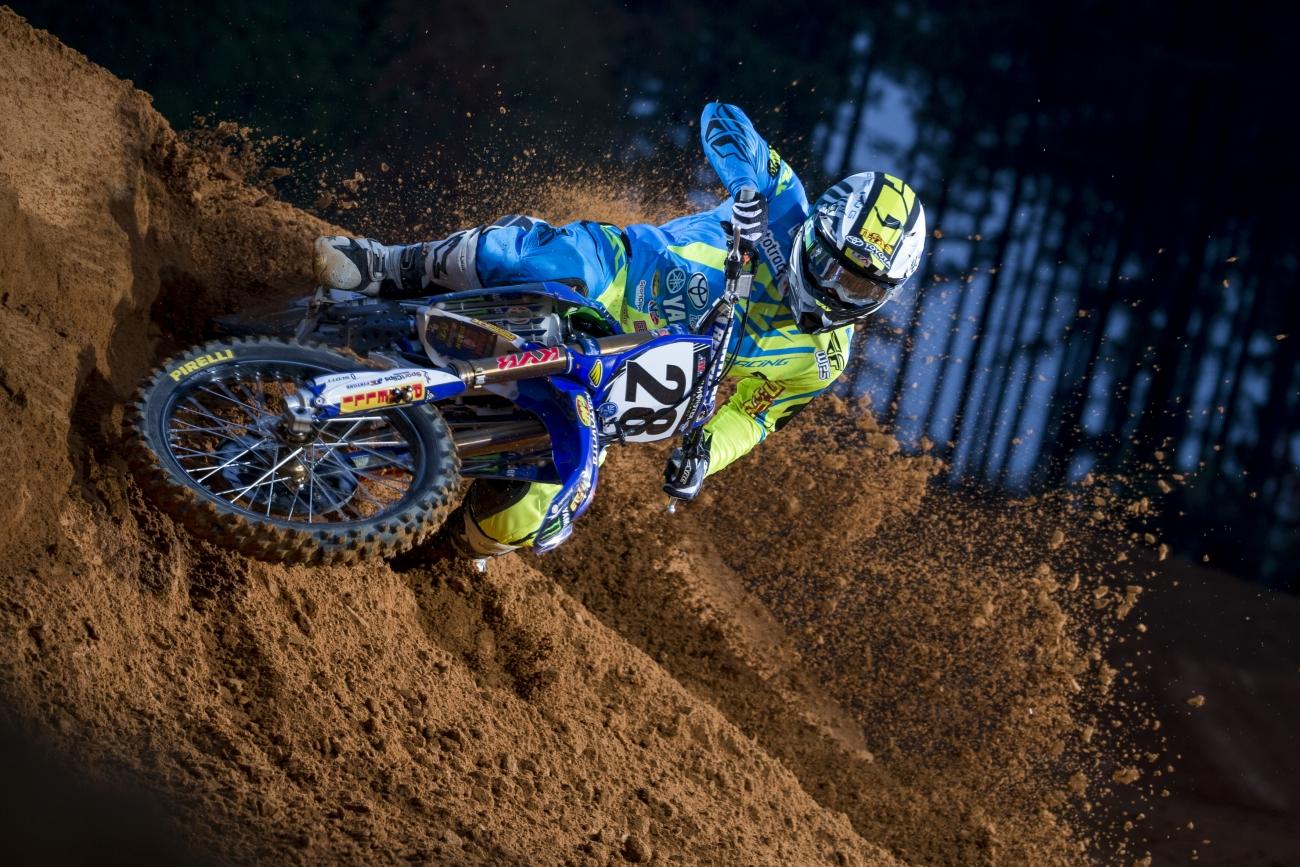 If the late, great NFL football coach Vince Lombardi ever ran a supercross team, he’d have a guy like Weston Peick racing for him. Lombardi was never at a loss for words when it came to such topics as character, willpower and hard work. As an example, one of his classic pearls of wisdom stated, “The difference between a successful person and others is not a lack of strength, not a lack of knowledge, but rather in a lack of will.”

Weston Peick can find a very close match to that quote with his current place in modern day motocross. And since we’re on the topic of football and football coaches, who better to give us a read on Weston Peick and what the frighteningly fast approaching 2016 season will bring than his owner and coach, Coy Gibbs.

“I think as an organization, whether it be riders or drivers, we’re not the wine and cheese crowd,” pointed out the JGRMX AutoTrader/Monster Energy Yamaha team leader the day after Christmas. “Our guys on the motocross team are hammers. With us, number one, you have to be tough; you have to be mentally and physically tough. You also have to be smart and you have to be athletic. I admire Weston Peick for all this. He’s big, physical and tough. The thing we need from him this year is consistency. We need that to take it to the next level. I look for a lot out of him in 2016. I think he’ll be on the box at times, and there’s no reason why he should be outside the top five. You put yourself in that top five position and you’re going to be on the box. I’m really looking forward to this season with Weston.”

So with all of this in mind, on Sunday afternoon, Racer X sought out—and found—Weston Peick. After finishing tenth in the 2015 Monster Energy Supercross Championship—and collecting his first career podium finishes at Santa Clara and Las Vegas—Peick is looking for very big things in 2016.

What are you up to the rest of the week?
Right now I’m just chilling and then I’m heading to Bass Pro Shops to go look at some stuff. I’m just going to head over there and look at some guns and stuff and look around.

Switching gears, are you ready to racing here in two weeks?
Yeah, I’m definitely looking forward to it. The off-season seems long, but also short at the same time. But, yeah, I’m ready to go racing.

I’ve been following motocross since I was basically in grade school. You have to go back a long time to think of a racer that’s scratched and clawed to earn everything like you have. What do you think about that?
Yeah, it’s definitely not the ideal way to have to do it, but you know, some people just have to come up that way. It just makes you grateful for everything you get once you finally make it. It’s just one of those things some people have to do.

How did you and your dad Lou first get into motocross?
My dad used to race and stuff back in the day. He used to have a Team Green dealer support deal and when he was coming up as a Team Green rider we just kind of rode together. I started off riding at a young age and that’s pretty much how we got going.

When you started racing, did you guys compete locally and did you take it seriously?
We always raced locally, but it was never anything serious. It was just local races at Perris, Elsinore, Barona and that kind of racing. It was much more of a family thing back then. Like I said, when my dad was younger he raced as an amateur for Team Green and took it seriously but it didn’t work out for him. Coming up, when I was at a younger age, we just kind of did it for fun.

When did the racing get more serious for you? Did you start doing some of the significant amateur races?
When I was a kid, for me, nothing was really serious at all. We got serious when I started to do the amateur stuff on bike bikes. That was around 2006 and that’s when I started taking it seriously. I started off with the local national stuff like Mammoth and Vegas and the bigger regional series. I was racing the novice class then and then I started doing the bigger amateur nationals in 2007. In 2008 I turned intermediate.

I definitely came up in a more unique way and I could see that developing, but it came out my way and we kept fighting until we got to the top.

I know you played high school football when you were younger. Not normally a sport associated with motocross racers…
I played football in high school in ninth grade. It was right around the time of 2005 and 2006 that I as playing as a freshman. Racing wasn’t even on my mind when I was playing high school football. Eventually I stopped playing football and started racing again.

Were you good at football?
Yeah, I was pretty good. I was a defensive and offensive lineman and I was playing for one of the better schools in our county. Like motocross, football was a tough sport as well and some of the things I learned there kind of fell into place for motocross.

When did you decide that you wanted to try and make it as a professional in motocross?
I’d say 2007 and 2008 when I started doing the amateur stuff and started doing well and started beating some fast kids, I was doing that with not a lot of racing time under my belt while coming up. My dad still had the budget to take me racing and we were able to take it seriously and that’s where it all took off. He had the funding and stuff to be able to do it and we made the most of it. You know, during my amateur career we just had a little bit of support from the sponsors, but the main budget came out of my dad’s pocket. He was buying the bikes and taking care of the travel. We never really had much support from anybody except for a little bit of stuff here and there.

Did that get frustrating at all?
Yeah, I think it did. I mean obviously at that time we weren’t really the fast riders that had the full ride and support for the amateur races, but like I said before, it was just a different way that we came up. We knew I had potential and we just kept working on the things that I had to work on to get better. I had a lot of people around me that helped me out with funding stuff that aren’t big name people; they were just people we met through friends that just supported the program. They were people in my amateur career that helped get me from point A to point B. They’d help me with a little bit of funding or buying me a bike and stuff like that. It was, more or less, a lot of smaller people that helped me put the program together.

As you began to ascend in the professional ranks, did you start to realize that you were unique and had a unique story? Like we spoke about earlier, you just don’t see a guy like Weston Peick at the premier level of the sport all that often.
Yeah, I knew coming up that I was doing it the tough way and that I was definitely different than all the other guys that I knew from my amateur career who never really had to worry about getting from race to race because they always had something lined up for them. I definitely came up in a more unique way and I could see that developing, but it came out my way and we kept fighting until we got to the top.

To your way of seeing things, when did the breaks start coming?
You know by 2014 I had my own team and we were doing real well and then I got a ride with RCH that really helped me on my path as well which kind of graduated me on to JGR.

You had a very good off-season. When you look to the Bulgarian and the Bercy-Lille races you did so well at, do you believe you’re heading into 2016 with a strong breeze behind you?
Definitely. Even being small races, I was able to finish second at Bulgaria and then I won over in France, which was a good accomplishment. It was great to get some race time over there.

You also had those two podium finishes during the 2015 season.
Yeah, those results were definitely some of my bigger accomplishments. That’s what we’ve been working for, me and my team and my trainers and my parents. It was an awesome feeling to be able to get up there on the podium and be able to support the sponsors and people who have helped me get there.

To stand up there on the podium has to be a phenomenal feeling for anyone, but it had to be extra special for you and the people who have helped, you because you got there, in my opinion anyway, in the hardest way imaginable.
Oh, it is definitely because I came up a different way than everybody else. It has been cool to have the results come that way.

How are you looking at the new season and what’s the ultimate goal?
To come out swinging and try to stay healthy and to try and be more consistent. So many people get hurt during the season. The most important thing is to be there every weekend.

And are you looking for podium scores?
Oh, of course. That and trying to get a win this year are the goals going into 2016.

Can you win one of these things?
Definitely. I think so. There can definitely be a win in the future.

You have a lot of fans. People like a success story coming from a guy that does it the hard way. Do you feel that sort of fan support?
Definitely. I have an awesome fan base of people who like the way I came up in the sport and the fact I have a never give up attitude. I think that’s something good and different that people like.