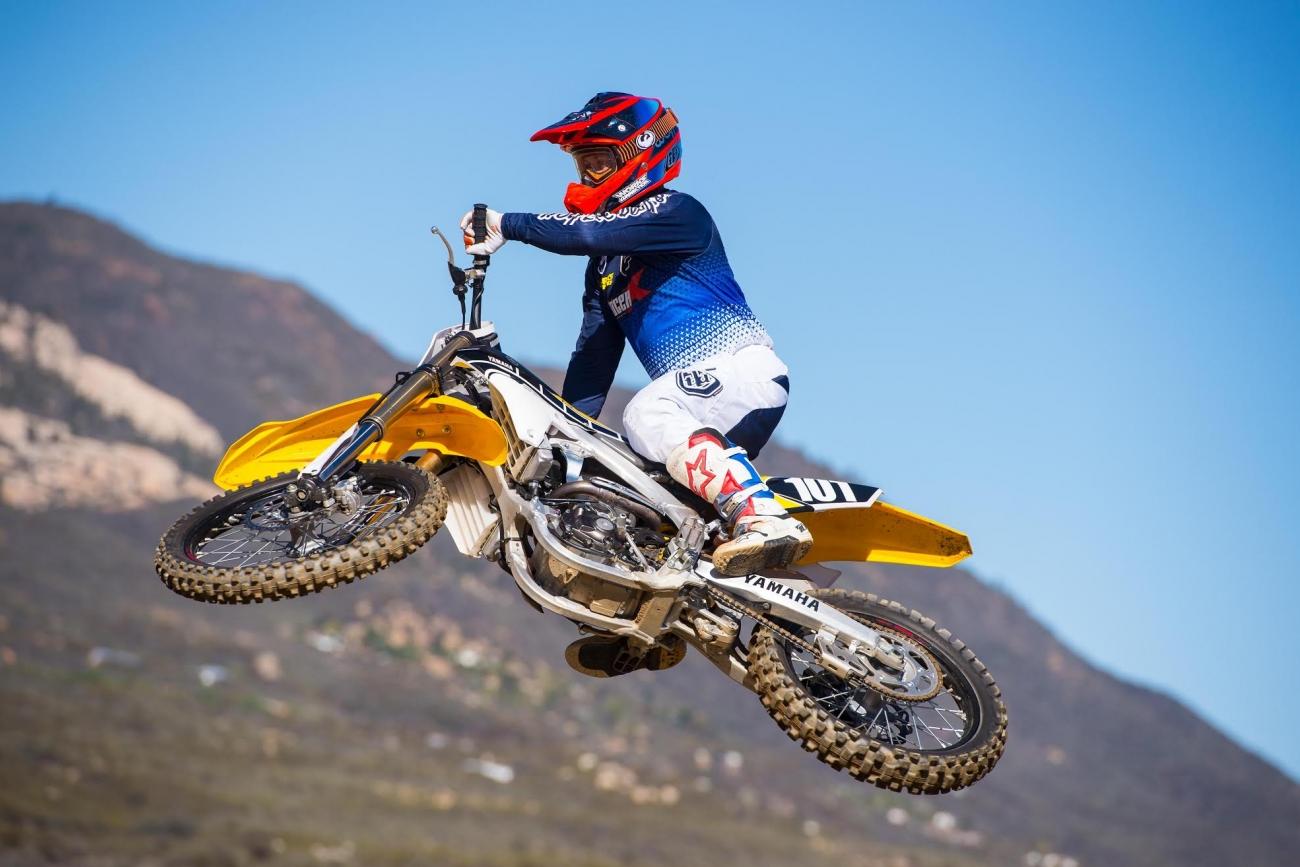 As always, your piece on the Racer X Website last week was entertaining and enlightening. Perhaps you can help me with this head-scratcher: Arnold Schwarzenegger moved to the United States in 1968. As a star of stage and screen, and as the "Guvnah" of California, he has been exposed to American culture and linguistics more than most immigrants. Ken Roczen moved to America in 2011 to chase his dream of winning in the United States. Relatively speaking, Roczen is a fresh-faced newcomer compared to "Ahnold." So, my question is this: how is it that Kenny Roczen speaks perfect English and sounds (and looks) like a SoCal surfer dude, and Arnold Schwarzenegger still sounds like he just climbed off the set of Hogan's Heroes? Things that make you go hmmm.

That is a bit of a shoulder-shrugger. I always wondered why Chad Reed still has a relatively strong Australian accent and Brett Metcalfe sounds like he was born and raised in California. You would think that it has something to do with the number of years you were immersed in the language but Roger DeCoster’s case clearly defies that. DeCoster has been in the United States since the early 1980s speaking his version of the English language. It’s not like he isn’t able to communicate or articulate his thoughts but his accent is still thicker than a Japanese photo album. I like to imagine that after he’s had a few beers he starts to drift between English, French, Dutch and German, slurring all four languages into one bizarre dialect that only he and his old drinking buddies can understand. I have no proof that this happens, it’s just a fun little exercise that my inner monologue participates in once in a while. The truth is that Roger is fluent in, like, four or five languages and maybe that has something to do with his permanent accent. Roczen, on the other hand, is a beer and a doobie away from sounding like Spicoli from “Fast Times at Ridgemont High”. His transformation from a fair-haired German boy wearing lederhosen and drinking milk out of a beer stein to SoCal bro-brah happened seemingly overnight. Again, Kenny had a pretty good grasp on the English language before he moved here and he has been coming to the States since he was a kid for amateur races. Still, his accent disappeared so fast it was on the back of a milk carton during his rookie season. If any linguistic experts can help with this I’d love to hear a legit explanation. For now, I’m just glad they are both here and involved in the sport no matter what their accent.

I wanted to start this with a Weege story.  In 2005 or so I was at the JNCC AAGP racing the A class at Sugo, Japan. I knew that some American GNCC guys were going to be at the race and I had some free time so I looked around ad found Weege hanging out with Rodney Smith and Jason Raines in the clubhouse.  I walked in the door and then blurted out, "Weege"! Jason turned around and looked at me like I was an alien from another planet! I guess being the only American living and racing in Japan did make me stick out a bit!. Anyways, living in Japan I always enjoy listening to the Pulp MX podcasts and on the "gun show" that you recently did with Matthes and some of his previous shows I have noticed a lot of discussions about products and bikes not really being what you think they are.  As an example, I keep hearing that the bike RV2 was winning on was a 2012 that looked like a 2013 or 2014 model?  Same deal with Showtime, I think he was racing an older Honda CR250(?) then the actual model year that he was racing in.

Last year I bought a KTM 450 SX/F FE III after reading about how great the bike was in all of the different magazine tests. Living in Japan, I really can't go to Glen Helen and see what the factories are riding or racing. So yes, I actually DO tend to look at the shootouts and see who wins and which bikes are good for what.  Transworld used to post lap times with their tests which I liked because it seems that no matter if someone likes a Kawi or the SSS suspension in a Yamaha, the lap times don't lie.  So I shipped that KTM FE to Japan and did some races on it this year and found the CCS4 forks to be terrible! I also have a 2007 Honda CRF450 and thought those forks were bad.. not even close! The forks on this KTM are unbelievable.  It seems that somewhere along the timeline of 2015, the hounds were released and all of the sudden it was tweeted and printed and discussed that Dungey was actually using cone forks, not the forks that came on my Factory Edition.  On another podcast that Steve did, Tom White was discussing bike sales dropping quite a bit.  Do you think that buyers are getting frustrated with buying a bike that "gets great reviews" but then when the buy it and race it themselves, all is not as they appear? Sure, the KTM forks can be fixed, but why spend $1000 if I could have avoided it? I love the motorcycle industry and the opportunities I have had to race in Japan and to meet people all over the world with bikes, so if the sales are down and the industry is getting smaller maybe there are things that could be done to change that trend. What do you think?

The Weege story was a slow start, pal. I literally fell asleep two sentences in and woke up several hours later with an imprint of the TYUGHJVBN keyboard buttons imprinted on my forehead. Very snoozie. But your question is actually good and I want to address it. On occasion, teams have been known to use parts from previous years if a certain rider likes the feel or performance of that bike better. Jeremy McGrath did this with his steel-framed Honda from 1993 because he like the characteristics of that bike and the stel frame for 1994 and on had a different feel. I know that the team I rode for in 1998 used cylinders from 1995 because they worked better. It happens. But using a frame or engine part from a bike that isn’t available to the public yet is illegal and doesn’t happen. Bikes have to be homologated [available to the public in certain numbers] before they can be used in professional competition. Manufacturers are given leeway on this for certain developmental purposes, such as the four-stroke project that Yamaha started with Doug Henry. Those are rare circumstances [I’m pretty sure each brand got a one-year development pass, and I think they’ve all used them up by now] so you don’t see it happen often. KTM has circumvented that rule with their FE bikes but they are actually for sale in a limited number and well within the rulebook.

The KTM 450 you bought has forks that are notoriously, “meh.” They are set up very soft and often times their owners will have trouble setting them up. I’m not telling you that they are ever going to be amazing but they shouldn’t be as bad as you are describing. Check out the Dialed In video we did with the bike and see if it helps.

Here’s what you need to know: Especially in regards to suspension, you will never be using the same thing the stars of the sport are using. The Cone Valve fork is WP’s version of a kit fork and the stuff they use for Dungey isn’t even stuff you can buy. Showa and KYB sell “A” kit stuff for all the manufacturers and that is as close as you’ll get for your bike if you are willing to drop some serious cash. KTM will move to an air fork for 2017 though so if you can’t get your stuff working you can always sell your bike and upgrade next year.

So I've been pondering an idea lately that I was curious if you think could actually happen one day. It’s no question that when Honda and Kawasaki were making 500cc 2 stroke motocross bikes they were a machine for real men. Super fast and hard to ride due to their outdated chassis and suspension. My 1990 CR500 is like riding a washing machine with the space shuttle engine in it. Motor wise I'd say it's close to my KX450 just snappier. Do you think if the factories started making 500's again with current chassis, suspension, and technology that pros may start riding them? I know Service Honda makes them in small numbers and I will soon be replacing my 450 with one. With a little motor work those beasts could make way more horsepower than the current 450's. Is this a plausible idea or are guys too scared to ride them?

Troy
"Not enough power in Michigan"

No. What? What is wrong with you? Listen, I’m as big a fan as anybody when it comes to two-strokes and I believe 100 percent that getting back a 125cc class, in particular, is critical for the health of the off-road community as a whole. That said, 500’s went away for a good reason; nobody could ride them. Even the very best in the world spent all their testing and development time detuning their race bikes so they could get them around the track without snapping both arms off their body like that guy guarding the bridge in “Monty Python and the Holy Grail”. “It’s merely a flesh wound!”

Now, I’m sure you are super bad ass and I’d be shocked if you don’t have a tribal tattoo all the way around your bicep and look/act exactly like Broski from that YouTube video “My New Haircut”, but most folks aren’t interested in that much power. And the truth is that the new aluminum frames transfer too much vibration to your hands and make them even less fun to ride. If you are set on getting one I would see if you could stick a Honda 500 motor in a steel KTM frame. I’m not sure it can be done but that would be the best setup. Good luck with all that power and send me pics of the new bike. Now go hit some Jager bombs!