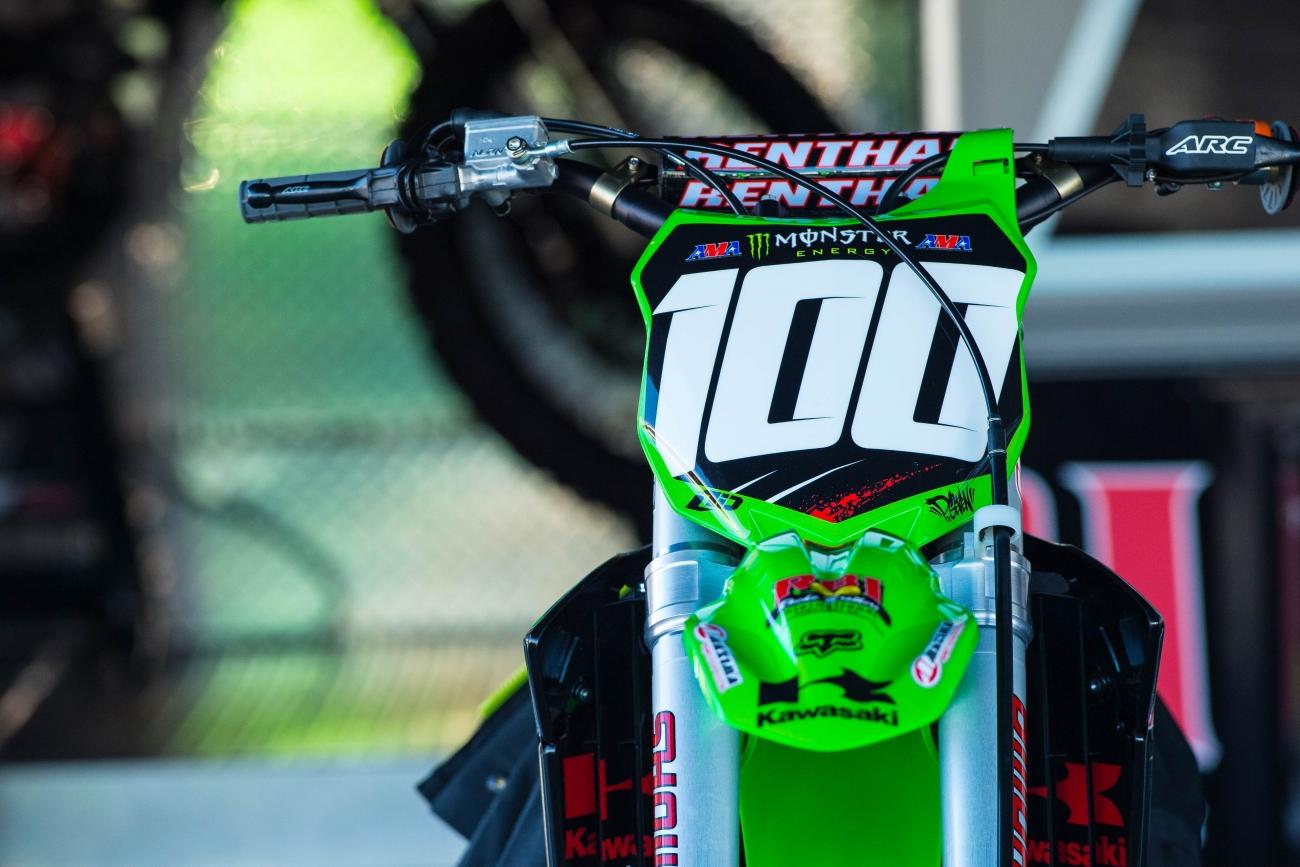 One of the more head-scratching stories of the week came from England, by way of California, when Josh Hansen announced he was going to race the UK Arenacross series in 2016 rather than Monster Energy AMA Supercross. Hansen said he was doing it, in part, because the AMA had assigned him #57 based on the points he scored last year and he wanted to keep the #100 he raced with last year, and in numerous years during his dozen-year career.

“I’m pumped at the prospect of a new challenge and at competing in the UK,” said Hansen, in a press release from the series. “I know the guys back home just won’t get it and that will drive me on even more. I see the Arenacross series as going places and I want to be a part of that. I reckon that after this, the gates will open and the British series will be flooded with Americans!”

He was more focused on the number issue on his Instagram, as you can see below:

What's up to all my fans and people that care, AMA likes to make it difficult , and tell you the truth I don't believe in #57 or the politics that has come with it. So I've decided to globally expand this year. Yes people I will be back for Supercross 2016 I picked the #AXUK because I've always wanted to visit here and now that I got a chance to visit and race why not? I'm not a arenacross rider nor do I want to be unless I get to ride here.... I'm a Supercross rider forever but I'm not gonna sell out being a clown in there circus show...... I will be racing everything again in "17" as #. A lot of you will not understand but there needs to be a #RidersUnion and good positive changes made. @kawasaki - @foxracing - @shiftmx - @rbimotorsports - @supertechperformance - @lvn100 //////////. P.S - I have rad news coming soon Thx y'all #LetLive

The problem appears to be a misunderstanding of the AMA’s numbering rules. Riders who finish in the top ten in total points each season or win an AMA 450 Supercross or AMA 250/450 Motocross Championship can pick a permanent number for the rest of their career; single-digits are reserved for the champions, everyone else has to choose double-digit numbers. Triple-digits used to be allowed, starting in 2001, but the AMA decided to change that a few years ago, grandfathering in riders like Christophe Pourcel (377) and Mike Alessi (800) so they could keep their earned numbers.

The two-digit career number and the requirement to run the national number you earned were both implemented in the rulebook with the 2011 SX/MX season. Unfortunately for Hansen, his #100 was never his permanent number, according to the AMA’s Kevin Crowther; he simply requested it one year after racing Lites SX-only, back before that division’s points counted toward the season tally, and then kept requesting it each season that followed. The rule changed, at the request of Feld Motor Sports, and 250 SX points now count towards each rider’s season tally. As a result of his 2015 results, Hansen was assigned #57 for 2016.

According to Crowther, the AMA informed Josh last season that he would have to run the number he earned in 2016, as numbers 100 through 115 are usually reserved for riders with special circumstances, like ones coming from overseas, coming out retirement or coming off a season-long injury. For instance, #111 has been issued to such visiting stars as Roger DeCoster, Jean-Michel Bayle, Stefan Everts and Greg Albertyn; #101 had gone to an out-of-retirement Mark Barnett and Johnny O’Mara, as well as incoming international riders like Mickael Pichon and Ben Townley, or the back-from-injury Gary Jones in 1976.

From 1975 through 1980, no one was given #100. In 1979 Bob “Hurricane” Hannah was both the AMA Supercross and 250 Motocross Champion, but broke his leg while water-skiing in September of that year with his friendly rival Marty Tripes driving the boat. As a result, Hannah did not race in 1980, so when he returned in ’81 the AMA gave Hannah #100. He won three 250 Nationals with it. The following year, Hannah earned #4.

It wasn’t until Ron Lechien missed the entire 1990 season after breaking his femur at Steel City in September 1989 that #100 was issued again. A former AMA 125 National Champion, Lechien returned to the 500 Nationals in 1991 after TUF Racing’s Dave Antolak offered him a KX500. He finished the series fifth overall, earning #31 for 1992.

Trampas Parker was the two-time FIM World Champion when he decided to spend the first month of 1992 racing AMA Supercross aboard his Honda CR250. He was given #100, then returned to Europe to try to defend his 250cc Grand Prix title. He ended up losing it to fellow American Donny Schmit, who would have his own history with #100 a few years later. As for Parker, he was assigned #79 for the following season, had he come back to the states.

In 1991 Mike Healey was the second-ranked rider in the FIM 250cc World Championships aboard a KTM. He switched teams in ’92, joining Bieffe Suzuki, but things didn’t go so well and Healey ended up coming back the states after the GPs and entered the Steel City 125 National on a Suzuki RM125. He was assigned #100 in that race and he went 4-1 for second overall. One year later he was signed to a TUF Racing Suzuki deal, and wore #100 again. This time the AMA made him move on from the ceremonial #100 and assigned him #24 for 1994. (Also, check out the recent podcast Steve Matthes did with Healey.)

When British star James Dobb moved to America in 1993 to ride for the Pro Circuit Kawasaki team, he was given #100 for his debut season on the AMA circuit. He ended up winning the Unadilla 125 National, which marked the first time since 1981 and "Hurricane" Hannah that a rider with #100 won an AMA race. He scored enough points to garner #30 for the following season.

Almost forgotten was the one-race return of the legendary Donny Schmit to his home track of Spring Creek in Millville, Minnesota in 1995. Schmit had retired from professional racing with two FIM World Championships. When he was offered the chance to say farewell to his fans with a bike from Honda of Troy, Schmit decided to strap the boots back on. He was given #100, then went out and finished an astonishing fourth overall in the 250 class, beaten only by Mike Kiedrowski, Jeremy McGrath and John Dowd.

“It was a good day,” said Schmit to Cycle News after the race. “I’ve never ridden a 250 here (at a national) and I wanted to do this at least once because the 250 is my class. I’m kind of surprised at how well I did, but I was pretty determined. There was a little bit of pressure this morning, but it was all worth it.”

Schmit said he would consider coming out of retirement if the money was right, and the AMA assigned him #54 for 1996. Sadly, less than six months after that Millville race, Schmit died unexpectedly from a rare blood disease called aplastic anemia. He was 29 years old.

Jimmy Button went abroad and raced the 125 Grand Prix Series in 1995 on a Honda team. He returned in 1996 to the AMA circuit on the PJ1/Xtreme Yamaha team, and the AMA gave him #100 for the season since he had no chance to earn points the previous year. Button earned #18 for 1997.

Three-time AMA Motocross Champion Mike Kiedrowski retired following the 1995 season, in which injuries plagued him and eventually cost him his Kawasaki factory ride. But then Kiedrowski had second thoughts and signed with Phil Alderton’s Honda of Troy team for 1997. The AMA gave him #100 for what turn out to be his farewell season on the professional tour. Had he returned in 1998, the MX Kied would have worn #23.

When Ernesto Fonseca turned pro, he was immediately signed to what was now the Yamaha of Troy team. Fonseca hailed from Costa Rica and was highly touted as an amateur, but no one probably guessed that he would win the first four professional races of his career—still a record—while running #100 in 1999 AMA 125cc East Region. His number for 2000? #28.

Mike Brown raced in Europe a couple of seasons, most notably in 1999 and 2000, when he battled with James Dobb and Grant Langston for the 125cc World Championship. Brownie returned in 2001 with another chance on the AMA circuit, this time with Mitch Payton’s Pro Circuit Kawasaki team. He wore #100 that season, and ended up winning the 125 National Championship with it when Langston (#111) suffered a broken wheel in the last moto at Steel City. He then chose #3 as his permanent number, and held it until it was claimed by Eli Tomac when he won the 2014 AMA 250 Motocross Championship.

After winning a record seven AMA National Arenacross Championships, Buddy Antunez decided to try his hand on the AMA Supercross circuit in 2002 with Team Suzuki. Because AX points did not count toward national numbers, Antunez was allowed to wear #100. He ended up finishing seventh overall in the 125 Nationals. And because Antunez grabbed #100, it meant that an international newcomer named Chad Reed would have to go with a different number, #103. One year later, after winning the East Region SX title and finishing third outdoors, Reed was assigned #22. He’s worn it ever since, other than when he was #1, and even named his team TwoTwo Motorsports. As for Antunez, he was assigned #31 for 2003, had he raced again.

In 2005 Josh Hansen earned #71, but he requested—and was given—#100 by the AMA’s Steve Whitelock. Riding for Red Bull KTM, Hansen did not race outdoors that year, but he did win a couple of 125 SX main events (Daytona and Pontiac). Because he did not have any points (125 SX did not count towards the numbers back then) he again asked for #100 for 2006 and was given it by the AMA. That meant that Ben Townley, former MX2 World Champion, would have to wear #101 when he moved to America to begin riding for Mitch Payton’s Pro Circuit team. Townley would win the 2007 AMA 125 East Region title, and finish second to Ryan Villopoto outdoors in the 125 Nationals. He finished in the top ten in final points and requested #101 as his permanent number. Hansen got injured early in 2006, but at the end of the season he did two AMA Nationals—Steel City and Glen Helen—and finished 20th and 40th, again not earning enough points to be assigned a number.

In 2008 and 2009 Hansen moved up to the 450 SX Class. His highest finish was eighth at the 2008 Phoenix SX. He earned enough points in both seasons to have a two-digit number, but the AMA allowed him to keep wearing #100.

For the next three years Hansen would ride a Kawasaki, going back and forth between the 250 SX and 450 SX Class, wearing #100. It was finally in 2013 that the AMA informed him he could no longer wear #100, as he earned #60 for the 2013 season, and #100 was never permanently assigned to him or any of the other riders of the past. He entered the first race at Anaheim as #60 in the 450 Class with the DBK/Famous Kawasaki team and he took out the last place rider in the last turn of the LCQ, Alex Ray, hitting him so hard he broke Ray’s knee brace. Hansen ended up getting fined $4,000 by the AMA and FIM and then his team suspended him for the next round in Phoenix, then the team disbanded.