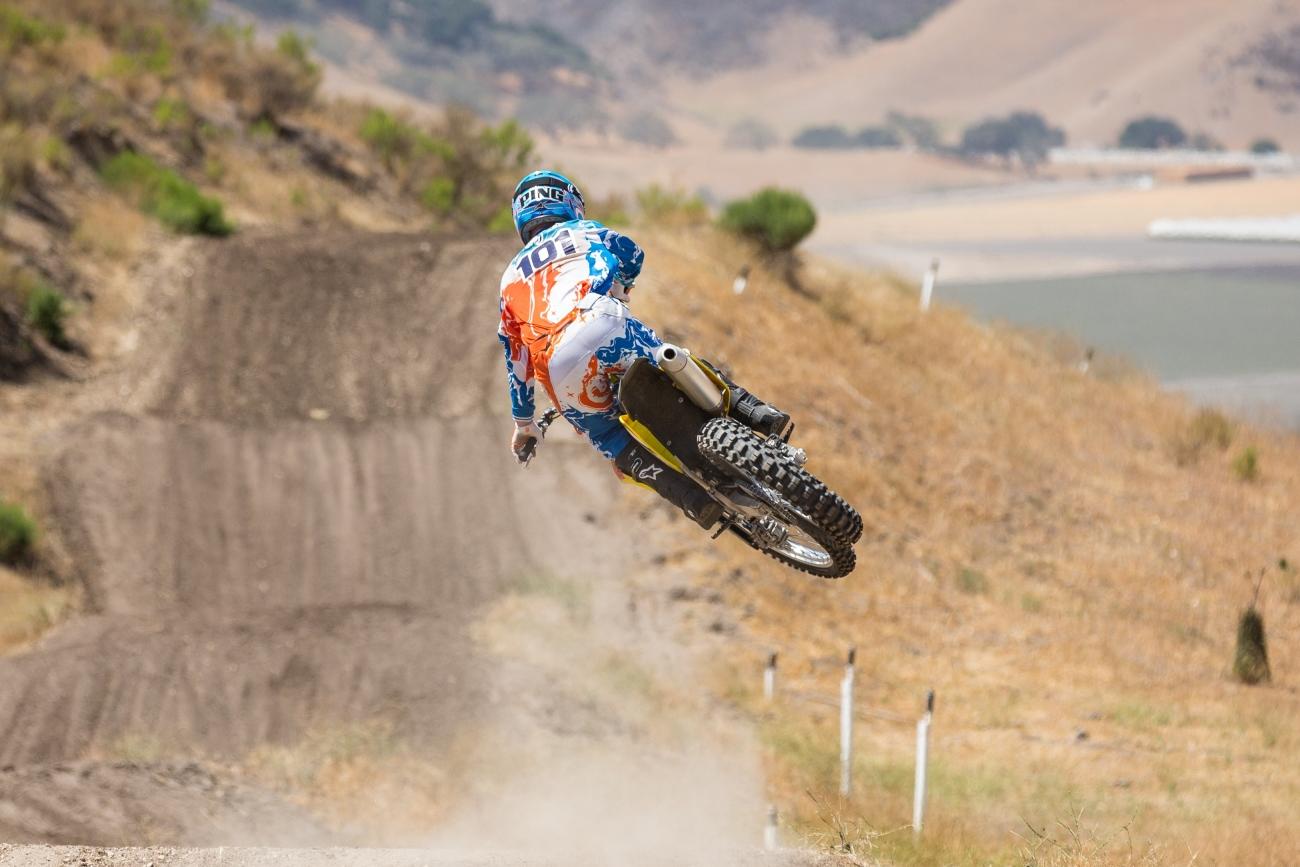 Greetings from the Internet! I am a longtime reader of Racer X and a fan of your weekly segment. As a longtime fan of SX/MX, I have noticed a little trend that I need to get to the bottom of—and who better to ask than you, David Pingree? With that out on the table, let's get down to business: team numbering. Whether it's simply a coincidence or divine intervention, I've noticed that the factory teams seem to usually have riders that share somewhat similar numbers. Before you jump to conclusions, here are some examples: Red Bull KTM (5, 15, 25), Factory Honda (14, 41), Kawi (Villopoto days: 2,12; beginning of 2015: 18, 48), TwoTwo Motorsports (beginning of 2015: 22, 33), Factory Yamaha (circa 2004:12, 22), etc. All of these teams had/have riders that share numbers that are somewhat similar either through sharing numerals, reverse orders, similar layout, etc. So my long-winded question is this: do some teams do this intentionally, or is it merely a coincidence? I could see the value in the branding and a nice clean layout in having the rider numbers similar, but it's also obvious that teams are not going to pick riders solely based on numbers too.

So anyhoo, keep up the good work and give the MX community some insight in this matter please!

Listen, Rain Man, I know it seems like these numbers are all lining up like some kind of miracle or something, but it is really just coincidence. Are you one of those guys who see the face of Jesus in his burnt toast or on his pancakes after he pours syrup on them? There is no divine intervention here, no stigmata, and no hiring riders to save money on number design. All of these scenarios are coincidence, nothing more. Kawasaki is going to have #3 and #54 under its tent this year, while Suzuki has #7 and #4; no similarities there. It sounds to me like you need to get out of the house a little more and stop fixating on numbers and stats. Let's see if we can get you out of the house and actually riding your dirt bike instead of sitting in your basement surfing the web and tripping balls about random facts and similarities in numbers in the sport. Go outside and find an activity, Doug.

I like reading Ask Ping and have since the days of Electronic Ping...

You got me through many a Friday in Iraq and Afghanistan when I wished I had been home looking forward to going riding. Back when it was Electronic Ping, I still rode a two-stroke, I was a lot younger and in better shape, and I was scared sh-tless of jumps such as LaRocco's Leap. I was fast enough and skilled enough to handle local doubles and triples, but to be honest, a real supercross triple, or whoops of any magnitude above a braking bump, would pretty much would make me their b-tch.

Now I'm over 50, have been riding four-strokes since 2004, and give no thought to jumping, well, anything. My favorite track here in Virginia has a 110-foot double—peak to peak on flat ground. It's easy. There isn't any place I go, in fact, that I don't do all the jumps, whoops, rollers, rhythms, or whatever.... Now, if I could just learn to corner and regain the fitness I had when I was younger…. But I digress. I don't think I am that much better a rider, but I do think the bikes are that much better than me. Should we be worried when riders 50-plus are out there doing jumps none of us would have even considered twenty years ago? Hell, I saw that video of Rookie White from the beginning of the year and actually gave (ir)rational thought to whether I could do that. You're not getting any younger and you know a thing or two about the sport, as well as medical emergencies—is it just my accumulation of head injuries, at this point, that speaks to my inflated judgment?

Not b-tching—thankful that I can still ride at all, and seeing Guy Cooper (who is a couple years older than me and way faster) jump the uphill triple at Ironman was awesome. Thanks for staying in the sport!

Thank you for your years of service, Wade. And also thank you for pointing out how old I'm getting; you can never hear that enough. Maybe you could write back soon and remind me about the ear hair I'm growing or the fact that I have to get up and pee a couple times in the middle of the night. Look, I don't know how many concussions you've suffered, but I don't think that's what we're dealing with here. What you are experiencing is happening with a lot of folks, and it's all related to the bikes. On those old two-strokes you and I grew up on, you really had to be spot on with your technique in order to clear jumps. In fact, in the 1980s and nineties there was typically one triple on every supercross track that the 125 riders couldn't jump. Now, you can clear the biggest triple on any track from the inside of the corner on a 250F; the bikes have improved dramatically. The broad power covers mistakes and allows you to carry more speed around the track while, subsequently, jumping bigger jumps. Modern bikes inspire confidence and that is really fun. However, with higher speeds come bigger consequences when you do hit the deck. You don't have to be a rocket scientist to understand that crashing from greater heights and faster speeds is going to result in more trauma. And how much has safety gear improved in the past thirty years? Knee braces are better, boots are better, and jerseys wick sweat away better. (Awesome—thanks for that.) But the chest, abdomen, and head are the areas that will kill or seriously injure you in an impact, and what are the sport's best wearing these days? Whatever helmet brand will pay the most money and a polyester jersey. And if the roost is bad, they might throw on a foam roost guard as well. Helmet companies have finally begun to implement newer technology after decades of stale design, and the results are already being seen. Sadly, young riders will emulate their heroes when they suit up to ride, and that means they will hit the track without much protection. Hopefully you are strapping on the best gear you can find and turning your brain on before you head to the track. Accidents will happen, but a little common sense and preparation go a long way. What’s that military adage—the 7 Ps? Proper prior planning prevents piss-poor performance? Apply that and you'll be ahead of the game. Stay safe, brother.

I was devastated this week when I heard about the passing of BASE-jumping pioneer and Nitro Circus star Erik Roner. As I was reading through some articles about what happened I drifted into the comments section where people were blasting Roner for continuing to do something so risky with a wife and two kids at home. It seemed incredibly distasteful, but as I thought about it more later in the day it started to make a lot of sense to me. Motocross is certainly dangerous, but when a mistake is made your injuries can range from soreness to broken bones. BASE-jumping only gives you one mistake. Am I being discourteous, or is there something practical to reassessing your risks after starting a family.

This is a tough one. I didn't know Erik, but that doesn't make his death any less tragic or painful. From everything I've read, he was an incredible human who inspired people and made them smile; those are the guys you really want to keep around. One side of this debate argues that he went out doing what he loved, embodying the words of his favorite author, Hunter S. Thompson, who said, "Life should not be a journey to the grave with the intention of arriving safely in a pretty and well-preserved body, but rather to skid in broadside in a cloud of smoke, thoroughly used up, totally worn out, and loudly proclaiming, ‘Wow! What a ride!’" Erik lived an incredible life and pushed the limits of skydiving and BASE-jumping like few have ever done.

The argument that the other side is making is that his death was avoidable and brought on by his own selfish hobbies that now leave his wife and two children alone to pick up the pieces of their lives without a husband and father. They opine that at the moment you decide to bring children into this world, your priorities have to change to put them at the top of the list. That's a pretty valid argument and one that, if followed, would eliminate many of the problems we face as a society. Still, nobody but Erik and his family know if he was calculating risks more carefully since starting a family. The jump he was doing when he was killed was a very basic skydive for the opening ceremonies of an event at Squaw Valley.

I feel pulled to both sides. I still do some things that many would consider foolish for a family man; racing dirt bikes and running into burning buildings are not exactly golf and a desk job. Still, my family is my number-one priority. In my heart, what I really believe is that when it's your time to go, it’s your time to go. I see people killed all the time who were minding their own business and doing nothing out of the ordinary. Car crashes, lightning strikes, school shootings, heart attacks…. There are million ways to die, and it happens every single day to people who don't deserve it. In that way I love that Erik lived a very full life in his short thirty-nine years; he was full-throttle. Hopefully his family can find peace over time and remember all the good things he did while he was with them. My prayers go out to all the Roner family. If there is one thing you have to take from something like this, it’s that tomorrow is not guaranteed and we need to really appreciate every single day we are here.