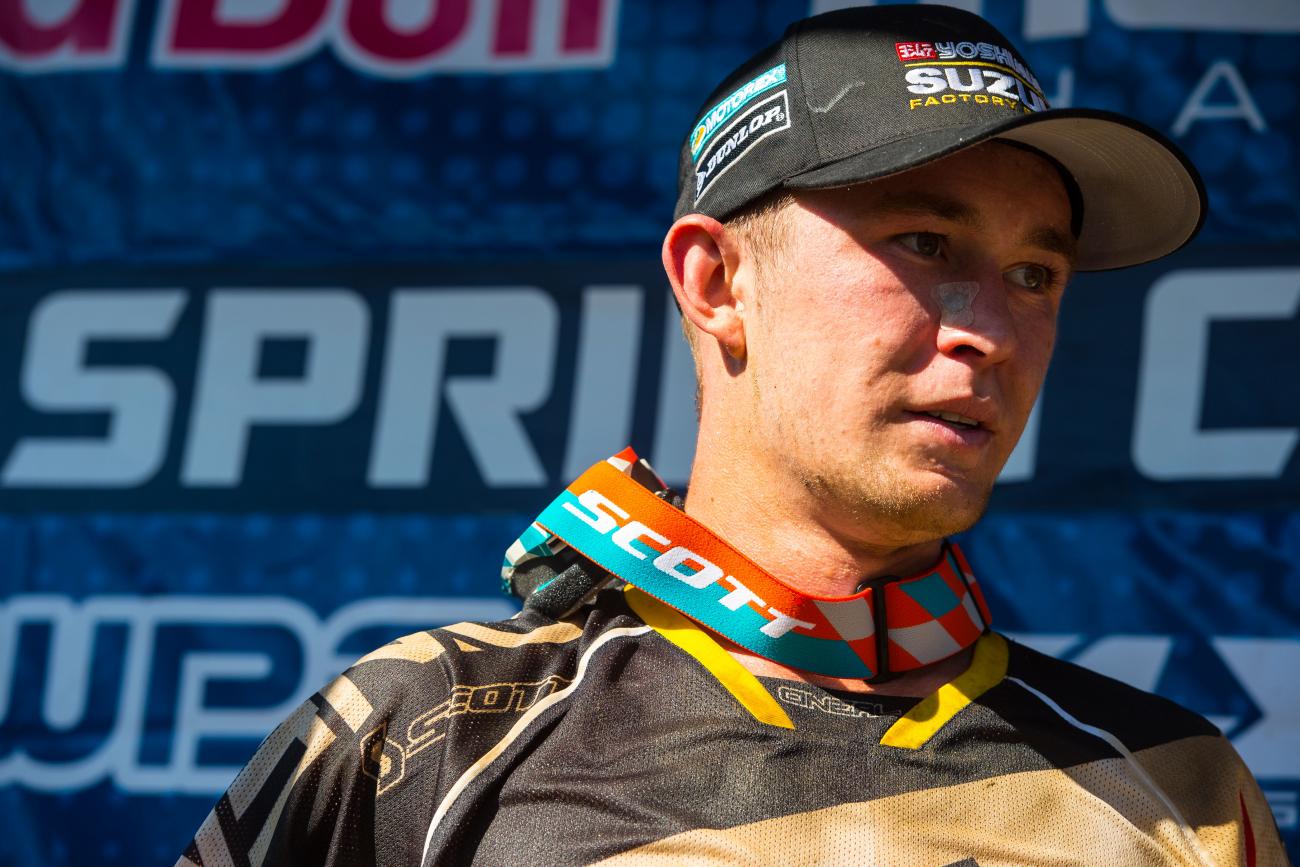 Yoshimura Suzuki’s Blake Baggett makes for a fine conversation for a Labor Day Monday, because he’s not afraid to work. Baggett was a surprise to many with a solid 450 rookie season where he totaled the third-highest combined point total in Monster Energy Supercross and Lucas Oil Pro Motocross, but he wants more for 2016. He’s investing in himself to do it, including continued construction of his El Chupacabra Ranch in Florida and some other changes behind the scenes. After a long season, break time is already done for Blake, as he gets back to work on testing and training.

Racer X: Well, I’m surprised you picked up the phone—I’m calling you from a random office line. So you actually pick up unlisted calls?
Blake Baggett: Hey, you never know. It could have been a big sponsor or something about to give me a bunch of money.

Oh, good point. Hey, so, you screwed up. At Utah you went on and on about the #4 going 4-4 for fourth overall and sitting fourth in the points. But we just totaled up the points from both supercross and motocross this season and you’re third for the year. Number three. You screwed up.
That’s alright. You know what—you’ve always got to step it up.

If someone had told you before the year began that if we totaled up all the points and you’d be third for the year behind Ken Roczen and Ryan Dungey, you’d take it?
Oh, yeah, I’d take that for sure! It was solid. I wish I would have had some better moments, but there’s always next year to improve. We had consistency; we were there for every round. I just need to step it up in a few areas and be in the fight.

Yeah, I thought there would be some times this year outdoors where we’d be saying, “Oh, man, Baggett is right there and could win this moto.” It seemed like, instead of trying to do that, you were more focused on riding within yourself.
Yeah, I was. I could have maybe had a few better races if I had hung it out more, but the goal was to make it to all twenty-nine events. I wanted to know the limits of the 450, and now I know what those are. Next year I just need to push it a little more, and hopefully I’ll be up front battling more.

What gave you that strategy? In the 250 days, it looked like you were just going for it all the time.
[Laughs] Yeah. You’ve got to get smarter on the bigger bike. You can wing it on the Lites bike; [on] the 450, you have to respect it or you won’t make every round. I wanted to be there and learn each weekend, be smart about it, keep my nose clean. I think I did that pretty good this year.

We didn’t see things get out of control for you this year, but were there moments somewhere, maybe at home during the week, where you learned “Whoa, this can get scary”?
Definitely. Throughout the whole year there were some times, and the last thing you want to do is lean on the throttle more because it will probably just make the situation worse. Looking back on those moments now, it probably wasn’t even that bad. You’re just getting used to the limits, knowing how far you can let it swap out there and still be fine.

Hey, some time soon you might actually have a teammate to race with under the Yoshimura Suzuki tent [James Stewart].
Yes! Sometime soon! I’m excited about it. James and I are good buddies. He helped me out a lot the last few years of my Lites bike career; he was kind of like a big brother to me. So I want to soak up as much as I can from him.

Okay, here’s what I’m seeing here; you planned this season around making all the races so you could learn. You want to soak up as much from James as you can. You spent all your money developing property in Florida with some big long-term goals for what it can be. It seems like all your planning is for the long term.
I’m definitely planning for the long haul, but to stick around you have to win races. I want to be here for the long haul, but I need to step my game up in a few areas.

Let’s talk about the spot in Florida. From what I’m hearing, it’s an epic track, but you’re living out of a fifth-wheel motorhome down there! So, lots of equipment, good track, but stuff like a house isn’t priority at the moment. What’s the status down there?
The outdoor track has pretty much gone dormant. I’m not there right now; I’m in California. I bet there’s some good rain ruts there, but we have a lot of equipment down there and we could shape that place up in an hour. It’s going to be an awesome facility to ride and test. Supercross track is going in right after Monster Cup, so we can do our November testing in there. At some point in December I’ll head back to California. Each day, each week, we keep adding things to it, and the goal is for it to become one of the best facilities anywhere, and people will want to come and ride there.

It sounds like you’re recruiting. You really want other guys to come there.
Yeah, that’s the goal. I don’t want it to be private. To know where you are, you have to ride with fast guys, so if you can link up with three, four, five fast guys, we can all elevate our game. If you can do that, then hopefully some day it’s you four guys who ride together all week battling for the win at the weekends.

It’s weird, though, because you’re one of the few guys with actual roots in Southern California.
Yeah, born and raised here. I just decided that the best thing for me is to head east as far as we could. Between the weather and the dirt we have, the whole setup with an airport being close, we have a good spot going on. Aldon [Baker’s] place is about four minutes away; The Nest [Ryan Villopoto’s old track] is about ten minutes away.

Four minutes! You could practically hear each other riding.
Probably! Get up on top of the hill and you probably could.

Why did these places all end up in the same spot?
I think there’s tiger’s blood in the water down there.

[Laughs] You’ve sunk all the money you’ve made your whole career into this place.
Oh, yeah, I’m all in. All my chips are on the table. Sink or swim from here.

"I’m definitely planning for the long haul, but to stick around you have to win races."

I think people like that. They respect when someone says they’re not satisfied and they want more, even if you’ve won a 250 title.
That was Lites bikes—I was playing with the pups in the pool. I want to swim with the sharks. Winning a 450 supercross title or a 450 outdoor title, it doesn’t get any higher. I’m trying to make the best decisions I can, and I feel like building the best motocross facility there is the best way to up my game.

What’s your schedule from here?
I started testing on Tuesday, rode supercross Tuesday and Wednesday, and it’s straight supercross every week from now until Anaheim.

So you basically had one week off and that’s it.
Yep. Spent a week working with some of the tractors down there, and we’ve changed a few people behind the scenes, getting the plan all dialed in. Now it’s time to start working and make sure we’re ready.

How much more inner circle can you get? Are you a foster child adopted by new parents?
[Laughs] No, you can’t change that. My parents are great, and Pops does a lot for the ranch and day-to-day business things—I’ll keep him around for sure. Dad is lot of fire in the fire pit. But I feel like my program needs to be a little bit stronger, so I’m changing other parts of the inner circle. If things get unraveled, I want to be able to get them back on track even faster. Just trying to step up in every area that I can.