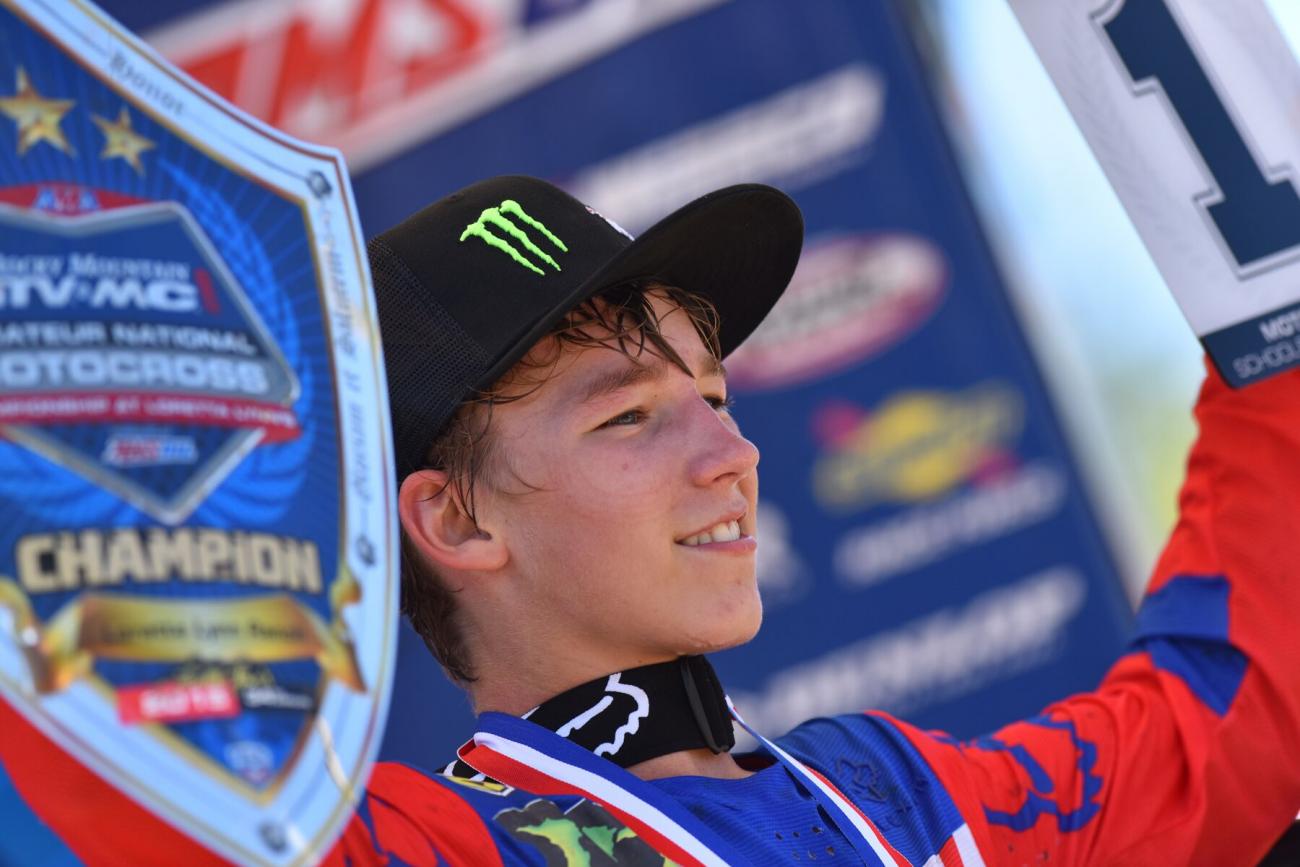 In 2009, Justin Barcia made the decision to turn pro at the Lucas Oil Pro Motocross season opener, bypassing the traditional route of turning pro after Loretta Lynn’s and then taking on Monster Energy Supercross. A year later, Eli Tomac perfected the trend, winning the 2010 season opener at Hangtown, less than a year after his final appearance at the Ranch. Now, Austin Forkner will follow the same path. The likable Missouri native wrapped up his Loretta Lynn’s career with two more titles (six in total during his career) in 250 B and Schoolboy en route to the AMA Motocross Amateur Rider Award, which recognizes the most outstanding non-A-class rider. Forkner inked a four-year deal this week to stay with Kawasaki and will make his pro debut with Monster Energy/Pro Circuit Kawasaki at the 2016 motocross opener if everything goes as planned. We caught up with Forkner following the award ceremony at Loretta’s.

Racer X: Talk about your week. Your first time here on the big bikes, you come down and dominate. How was it?
Austin Forkner: It was super-good. My starts were dialed all week, and that’s really key when you’ve got a class that’s as fast as the B class was this year. We were running lap times that were as fast or faster than the A guys basically every moto. It was good. My starts were good. I went 1-1-2 in the B and 1-2-1 in the Schoolboy class. Super-consistent and got good starts and just rode my own race, rode fast, and got two championships. I’m stoked.

I think you hit it on the head—consistency here is so key. As we saw in one class, a mechanical in the last moto can ruin it for you. How important was it to keep that in mind? Even if you went 1-1, you still needed that third one.
One of the things that I like to do, I ride smarter not harder. I got second two motos, but the guys that beat me weren’t in the championship hunt, so there was no reason for me to over-ride to try to beat them and possibly throw it away. So I got two seconds and four firsts and two championships. So I’m stoked for the way everything turned out. I’m riding really good right now. My bike’s really good, team’s good.

We don’t really get a chance to catch up with you much, but how was the transition from the Super Minis to the big bike? It seems like it’s been smooth, but were there times where it was like, this is harder or this is harder?
For sure. Whenever I first got on big bikes it was a big transition because, at that time, I was still a little bit too small for them, and we had to get suspension set up right. I was trying to get set up for Monster Cup, which I ended up not going to, so I was having to ride supercross basically straight from Super Minis to big bikes on supercross. So it was big [the transition], but we got it figured out. The bike’s working really good right now, and we’re making progress.

Have you had to change your style at all?
I’ve had to work on little things transitioning from a two-stroke to a four-stroke, but everybody does. I wouldn't say that my style has changed, but I’ve had to change a few little things, but obviously it’s working so I’m going to keep doing that.

Another big thing that happened here: four years with Monster Energy/Pro Circuit Kawasaki. That has to feel good to already have a deal in place.
Yeah, I’m super-stoked. The past two weeks I’ve been out in California testing with Mitch [Payton] and all of the pro team. We’ve been working with suspension and motors and stuff like that. We all got along really well. I’ll be staying on green bikes for a while now, so I’m pumped.

Talk about going and spending some time with the pro team. This is what you guys dream of when you’re little, and you finally got to go and do it. What was it like? Were you nervous? What was the experience like for you?
I was a little bit nervous, but I think whenever I got up there and they saw my speed, I was going as fast as… there were some pro guys at Pala, and I was going as fast or even faster than some of them, and they’re doing really good right now in the outdoors. I think I may have surprised them a little bit, and I surprised myself for sure. I was pumped that I was going as fast as some of the pro guys. It went really well. We got the suspension working really good. We did a little bit of motor testing and got the motor set up good. It’s a rocket ship. It handles good. I’m really stoked the way everything turned out.

What’s next for you? You have to do arenacross, right?
Yeah, I’ll be doing arenacross early on in January, February, and March, and then doing probably Daytona and Freestone still as an amateur, and then after that Hangtown 2016.

You leave here with two titles, for your last time here. Talk about some of your memories of this place.
I like it, but at the same time it’s a really stressful week just because this is the race of the year when as a pro you have a new race every weekend. So if you have a bad race or moto, you have another one to look to the next weekend. Here, if you have one bad moto, it can ruin your whole week as far as that class. But I’m happy. I rode really good and really consistent this year, and I’m happy to end it with two championships. This is my best year that I’ve had at Loretta’s with four firsts and two seconds and two championships. I’m super-pumped because my classes were stacked. I’m happy.

You’re training at Robbie Reynard’s. He won a lot here. What did he teach you? Did he give you advice or anything for this week?
Yeah, he came over before just about every moto, and if he was on the track before or whatever he had seen on the track from earlier in the day, he would just give me little tips and things that he saw that I did wrong or that I did right during my motos that he had watched before that. He just helped me out a lot. I’ve been training with him in Oklahoma. He has a pretty good facility. He has a couple tracks at his place, and then we can go ride [Trey] Canard’s some days. If it rains we can go ride his dad’s track. He’s got a nice sand track through the trees. Good to get to work with a guy like that.