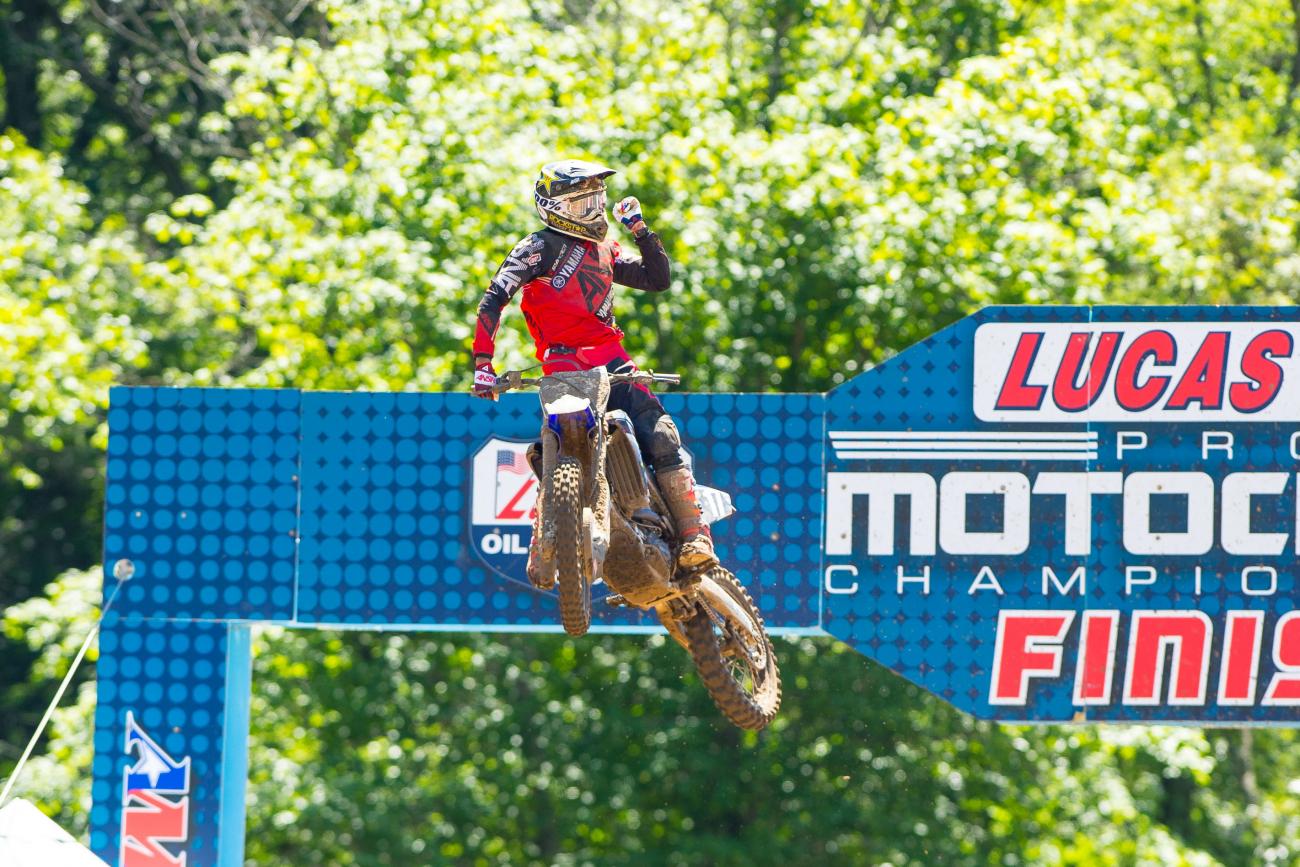 Yamalube/Star Racing Yamaha’s Cooper Webb had two weeks to sit and think about what went wrong late in both motos at the RedBud National, where he looked to have the overall locked up. And although he won a moto at Spring Creek last year—the last time he won a moto entering the weekend—it was his teammate, Jeremy Martin, who was expected to runaway with the overall at his home track. But Webb bounced back with a win in the first moto and followed it up with a second in moto two to claim the overall—his first since the Tennessee National in 2014—in just his third race back from injury.

Webb talked about his second career win at the post-race press conference.

Racer X: A little different than two weeks ago, but let’s focus on right now, what just happened. Give us your version of how the day went for you?
Cooper Webb: The day went really well for me. In qualifying we were right there where we needed to be. I felt solid all day. Then the first moto, I actually didn’t get that great of a start, but came around and made some good passes those first couple laps. Got around Jeremy [Martin], and there was about two guys in front of me. I had a little time to catch them and pass them. Tried to pull away as much as I could once I got into the lead, and just kind of maintained that gap the whole time. Worked out good in the first one. Then second one, I actually got my best start but unfortunately it was behind a not-so-happy J-Mart. He was riding good. I tried hanging with him as much as I could. He was definitely going fast out there. I knew 1-2 would get the job done. For me, I’m not in the points. It’s always nice to win, and that’s what our goal is, but I want to be smart as well.

You mentioned on the podium that you’re working your way back into race fitness and all that stuff, but how was it mentally today, especially after what happened two weeks ago?
It was tough. Everything with racing is tough. We’ve done enough laps at the practice track, but nothing compares to racing. That’s why we enjoy it so much, but it is tough. For me, I know I’m not quite at the fitness level I can be on the bike, so you always have that in the back of your mind. Will-I-fade- or when’s-he-going-to-catch-me-type deal. You just got to kind of run and hide, and for me, maintain. Still try to save something in the tank for the second moto.

How important was it to bounce back after two weeks ago at RedBud—to come out early in that first moto, get a lead, hold on, and get a win?
It was huge. I was racing, but I felt like I was robbed at RedBud, twice. So it was nice to get it done. I think that’s why I maybe rode a little tight and whatnot, because I was so focused about let’s get that win. But like you said, it’s tough to go out there from injury and just lead, especially when you have an angry 250 Class coming to try to steal your glory. It was nice. It’s a nice third race to win. It’s pretty spectacular.

Was it good to have the week off, or was it tough to sit on that for a week?
For me, it was good and bad. It gave me more time to get ready, but I was pretty ticked off that whole time off. But it worked out good. We got some good testing in and two more weeks on the bike and did everything we could. It was hard to sleep on it, but nice to get redemption.

It doesn’t look like you were having a problem with stamina, but where are you fitness-wise on the bike?
We’re getting close. The goal is to try to be able to sprint basically a thirty-plus-two moto. I feel Jeremy is at that level. He’s had all the off-season and plenty of time to get the motos in. For me, the biggest thing is the riding and the racing knowing how they do it. At the end of the day it’s a chess game. Knowing when to push and when to stay smart. It’s just kind of finding the best of both worlds. I would say probably 80 percent, but we’re getting there. It was a hot one today, probably the hottest so far. That’ll take it out of you. And him [Jeremy Martin] being here these two weeks, it’s tough to beat him.

How much did the heat play a factor today?
It was pretty hot today. For me, I live in California, so we don’t see the humidity. I think I struggled, well, not necessarily struggled, but I could feel it for sure.

I was curious about last night and the storm. Did you get any rest? I imagine you were in a trailer overnight. What’s it like to be in that situation where it’s really storming outside? Were you able to get the rest you needed before the race?
For sure. It scared me. I was actually staying in the motorhome for the first time, and our awning, I don’t know what time it was, but our awning went flying and it hit the roof. I thought we got struck by lightning, so I was tripping out. It was bad last night. I heard some hail, and they said there was a tornado warning. It was kind of like, if it happens, it happens. But it was tough with the time zones coming from the West Coast, but it’s something you’ve got to deal with.

It’s only your third race back. Are you where you expected to be?
I would think so. That’s kind of leaving off last year and winning the West Coast title and everything I have the momentum. I feel like I should be battling for wins. Unfortunately, with the injury I couldn’t be up there in the championship. It is tough. I’ve never had to come back mid-season from an injury. It’s kind of a learning experience. With the first one being a mudder, it kind of threw things off, but we’re just getting better and try to win.

Was it [the track] way different between the first moto and second moto?
Yeah, it was. They did a really good job. I was pretty impressed with that. Practice, it was muddy, but it got to where it had just one deep hard-pack line. You hate to see that because it unfortunately makes for terrible racing. So when they went out there and prepped everything, they made it as good as I thought it could be. It seemed to have plenty of lines and it developed really good. It got rough and it was pretty nasty in that second moto for sure. All good.

You mentioned this is Jeremy’s home track, literally. How important was it for you confidence-wise to win here?
It’s huge. I think, if there’s one place I want to beat him, it’s definitely here. Unfortunately, he beat me in the second moto straight up, but to be able to pass him in the first one and win was good. Coming into the tracks that obviously he doesn’t know as much is a confidence thing for me.

You’re not in this championship. What are your goals? Just win as many motos as you can?
For me, it’s just to go out there and do the best I can. Learn and test the bike and just try to be solid and learn everything I need for next year to try to contend with the title. I think, too, with the points later along the line, those guys are going to be thinking about it a lot more, and luckily for me, I can do whatever I want.