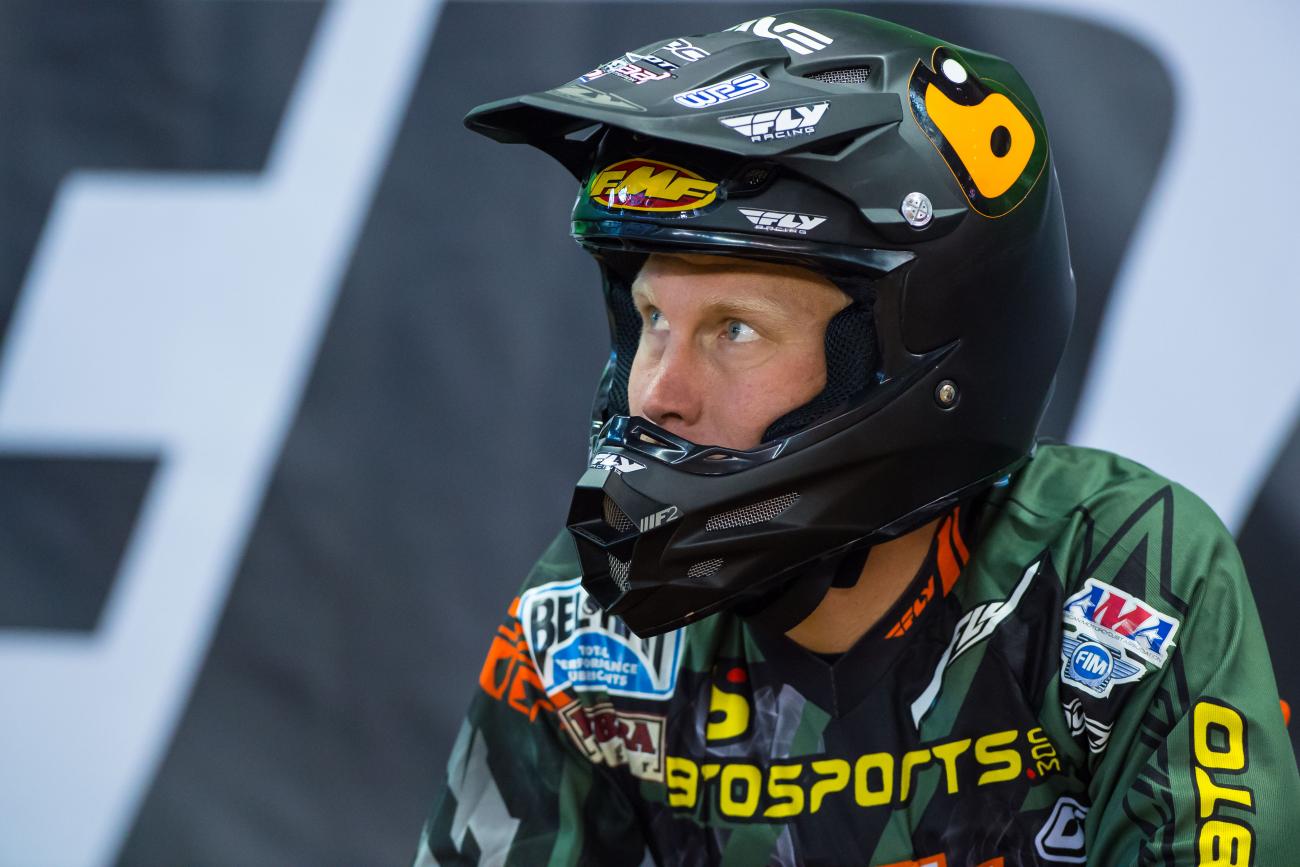 BTOSports.com KTM’s Andrew Short broke his kneecap at the New Jersey round in Monster Energy Supercross back in April, and he’s finally ready to return to the races this weekend. Well, he’s returning, ready or not. He talked to us about it this morning.

Racer X: So are you really coming back this weekend? Is it happening?
Andrew Short: Yeah, it’s happening in terms of racing at Millville, but I’m not really sure if I’m ready. The knee is still really tender, and it’s still a little swollen. I’ve been dealing with issues that aren’t even related to the break. I had an allergic reaction to the internal stiches. That’s really rare, supposedly only one in every forty-four thousand people have this, so I’ve just been waiting for that to clear up. Haven’t been able to ride a lot and nothing really can replace riding, and my knee has been pretty limited in movement, and that restricts some of the things I can do as far as training. I’m not exactly the most prepared I can be, but if I wait much longer the season will be over, and it’s important for BTO, KTM, Fly Racing, and the rest of the sponsors who support me for me to not be on the couch. I just want to go racing again.

We’ve all heard of ACL injuries, for example, and you’ve been through that. But had you not gotten that allergic reaction, how bad is a broken kneecap? Is it like any other broken bone?
It’s not a weight bearing bone, like the tib-fib in your leg. I’ve torn my ACL, like you said, and this was actually more painful than that. I was quite surprised. I underestimated what it would be like. Now thinking back, when I saw Mike Alessi break his knee cap in 2009, and then he raced the next race, he must have had some kind of…help to get through that. Even if they numbed it up, he would just be in a lot of pain. I underestimated it. Every injury is different, but you always think six to eight weeks, but you can’t expect them all to go the same way. It’s been a lot tougher than I expected, but that makes it sweeter to finally go and race. I know it’s not ideal to jump in mid-season—those guys are probably in better shape because they’ve been racing—but I’m looking forward to being around the team, being around the pits, and representing my sponsors.

What makes this even stranger is you didn’t even crash. What exactly did happen?
[Laughs] Yeah. Honestly, I thought I tore my ACL. I planted my foot and I heard it pop, and there was a lot of pain. I was very emotional after that because I thought it was an ACL. When I heard fractured kneecap, I was almost excited. But, looking back, it’s taken about the same amount of time a torn ACL would. I’m just happy that I’m here and getting ready to go racing.

You were battling with Broc Tickle. Was this injury related to that or just a coincidence?
If you recall, the track at East Rutherford was really rutted and technical, and this happened on the last lap, so twenty laps on a rutted track, it’s tough. I made a mistake and Tickle ran into the back of me. He had a big get off, and from the looks of it you’d think he was the one who got hurt. But he was okay. I planted my foot, and a lot of weight transferred to that area. The kneecap actually got hit by my tib-fib, not by a handlebar or the bike or anything like that. That’s what caused it to break, from my bone coming up and hitting the kneecap.

So you rode one more lap this way?
Yeah, I was in fifth place, and I rode one more lap. I think everyone else was down a lap, but by no means was my last lap stellar. But I still got fifth and that was big for me and the team. Unfortunately, I had to miss the last race of the series, but I felt like overall I had a really successful season. I knew outdoors was going to be a huge challenge to be as competitive as we were indoors, but I’m looking forward to having a whole off-season to come back strong in supercross next year and get to carry that momentum into the outdoors.

I talked to your trainer Seiji Ishii, and he said this year the plan was to focus less on the consistency side and more on the sprinting side. And good starts help, obviously.
Yeah, that was a mentality that both of us were working on. One of my strengths in the past was consistency, and honestly, being very vanilla. I was there every weekend, but my speed maybe wasn’t spectacular. For me, getting great starts this year was great exposure for me and the team and BTO and everyone who helps us. That was good, I feel like I had some really strong races and flashes of brilliance, but I feel like I had some races where I struggled, and I didn’t have the consistency I’d had in the past. I had some flashes, and that’s really hard for me because I’m older, so I’m happy to be able to adapt and race with the kids. I’m looking forward to expanding on that in the off-season and trying to bring even more of that next year, but also bringing back the consistency as well.

"I realize this might not be the best thing for me, but I don’t want to sit at home anymore. I might have a year or a year and a half left, and this is my dream and I realize it’s coming to an end. I want to race."

Okay, the third-gear starts. Does that even apply or work outdoors?
Oh, I’m going to go for it at Millville. [Laughs] I’m not sure if it’s going to work or not, but that’s all I’ve been practicing at home. Millville’s start is sandy, so I don’t know if I’ll get out of the hole the same way. If I can get out of the hole with my handlebars next to everyone, then I’ll beat them for sure because they’ll have to shift, and I’ll get a gap. Washougal, because it’s hard packed, I should be able to do it, same with Unadilla because of the rocks. Utah I probably will have to go to second because of the altitude. Supercross is much simpler because it’s similar conditions every time, and you have the plastic with the sponsor logos on the gate, which adds wheel spin, and that helps with the third-gear starts. I’m not quite sure if it’s going to pan out as well outdoors as it did indoors.

I just admire the fact that you don’t know where you stand fitness- or speed-wise, and maybe you’re coming back early, but you’re still going to go for the holeshot.
Yeah, of course. I might just start up front and fade way back, but at least I’ll give it everything I have. I think most people in this sport wait until they’re 100 percent prepared before they come back. Now that I’m older, at this part of my career I love racing, and there’s nothing I’d rather be doing. I realize this might not be the best thing for me, but I don’t want to sit at home anymore. I might have a year or a year and a half left, and this is my dream and I realize it’s coming to an end. I want to race. A lot of people have a different view on how you should come back from racing, but at this point in my career and in my life I have to do things differently than everyone else. I’m really looking forward to getting back out there with the best riders on the best tracks with the best bike. That’s something I’m really going to miss and I don’t want it to end, so I better enjoy it while I can. It’s unfortunate I won’t be at my best, but I’ll still be out there smiling.

Well, if you get out there and fade really badly, we’ll try to remember that and not talk crap on you.
[Laughs] I don’t care if you guys talk crap on me. I’m going to have fun. I think the first two races are going to be a big struggle for me. Then there’s a weekend off, and the last three I should be a lot more competitive.

I think that’s the challenge when you do this though. If you come back and struggle, you have to ignore what you hear and what you feel and make sure that doesn’t get you down.
That is a challenge. The mental side of racing plays the biggest role in your success. You can leave the judgments to the other people to decide if you did well or not, but for me, just knowing I went out there and gave it my best and didn’t leave anything on the table, I’ll have no regrets.

Your ranch in Texas, you had all that rain and flooding. How bad is it?
Yeah, I haven’t ridden on it all summer. I was supposed to ride at a few other tracks, and they kind of backed out on me. So that’s what I’ve got to go do next, build my track up again.

Major damage?
No, no. The last month things have gone back to normal, so that’s helped dry things out. There are some parts you can’t even tell it flooded, and other parts are really bad. A lot of fences and a lot of the dirt on the track are messed up. The houses, some places the dry wall got pretty wet, but it’s okay.

Was it scary?
When it was happening it was gnarly, but we live on a big river, so you have to know that’s going to happen sometimes.