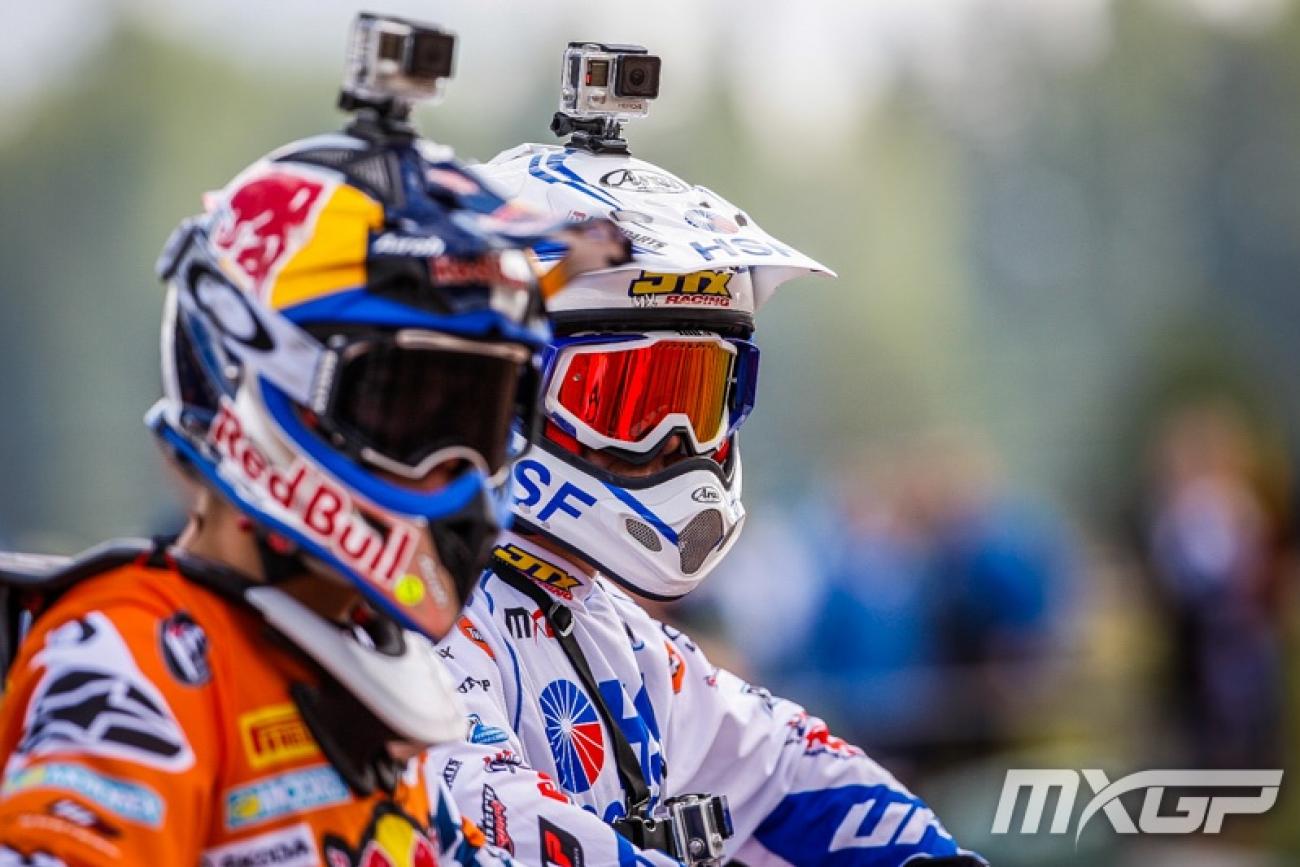 The twelfth round of eighteen in the FIM Motocross World Championship offered surprises and changing weather at the Kegums circuit, location of the 2014 Motocross of Nations in Latvia. It’s hardly shocking that, under periods of pouring rain and sunshine, the track morphed from hard and fast to slosh, to dry, and bumpy throughout a forty-eight-hour period, and whether the riders were facing mud, hard-packed sand, or just lumpy sand, it was clear that Kegums still favored a specialist and the rider who rounded the tricky 180-degree first turn in a leading position.

It was a confusing weekend for MXGP rookie Glenn Coldenhoff. The Dutchman, a slow-burn talent in the series, won his first MX2 Grand Prix at the GP of Great Britain in 2013 and took three podiums in the first five rounds of 2014 until he wrecked his knee and missed most of the campaign. The 23-year-old made his debut in the MXGP class this year with semi-factory status (Clement Desalle’s works machine from last year) as part of the Rockstar Energy Suzuki Europe set-up, essentially the brand’s MX2 squad.

Coldenhoff was apparently told that Suzuki would not renew his deal at the early part of the weekend. The rookie has had some inconsistent performances but has shown promising speed when he could get out of the gate. Coldenhoff had been looking forward to Kegums after a decent showing at the Motocross of Nations last summer and combined this confidence, two holeshots, superlative sand technique (as is the case with most Dutch racers), and probably a certain amount of “screw you” attitude to blast to a 1-2 and post a second career success. The irony, of course, is that after receiving the news that his contract would not be renewed, he delivered Suzuki its first GP win of the year, defeating good friend and factory brand-mate Kevin Strijbos in the first moto, and deflecting attention from HRC’s Gautier Paulin and a still-ailing Red Bull KTM’s Tony Cairoli in the second (after Yamaha Factory Racing Yamalube’s Romain Febvre had dashed free).

“I think you can compare the wins,” he remarked when asked to place his latest win against his first. “It is the same feeling…but now with the big boys and it is pretty crazy to win. I have the confidence now. Okay, there are a lot of sand tracks coming up, but that doesn’t matter. I have been getting stronger and stronger and been feeling better on my bike. I have made big steps in the last few weeks and it turned out to deliver a GP win.”

Paulin slipped into second place overall. The Frenchman ran to a dominant pole position on Saturday, echoing his 2014 Motocross of Nations performance, but couldn't make similar starts for the motos. He was far more aggressive in the second outing, where he managed to displace Cairoli from the podium.

The champion was dismayed that his arm injury was more acutely painful through the softer parts of the track compared to the hard-pack. Dosed with more medication, he nevertheless kept his place in the title fight. The Sicilian had the ideal scenario in the first moto when Febvre tangled in the first corner, went down, and couldn't get the Yamaha started quickly enough. The Frenchman, so smooth and synergic on the YZ450FM, once more limited the damage by flying back through the pack to eighth, but Cairoli had still won a few points.

With the rookie’s flight to victory in the second sprint and Cairoli unable to resist Paulin and match Coldenhoff, the ground Cairoli won in the championship was lost and Febvre left Latvia with a little more padding around his lead with 41 points, almost an entire GP with six remaining. Febvre also heads the stats tables for wins and podiums thanks to his third place overall and seventh trophy in a row.

The Belgian duo of Strijbos and Yamaha’s Jeremy Van Horebeek both had starts to blame for their overall results while HRC’s Evgeny Bobryshev was much stronger in the second race. The Russian still placed two positions behind Steven Frossard, who was sixth overall. Frossard was drafted in to take Ryan Villopoto’s unused works KX450F.

Bad luck for Red Bull KTM’s Tommy Searle, who fell with Febvre in the first moto and was disqualified for cutting part of the track to enter the pit lane and get a damaged throttle fixed.

There were two nice stories in MX2. Red Bull KTM’s Pauls Jonass had the modest Latvian crowd on their feet when he led the majority of the first moto only seven days after his shockingly spectacular crash in Sweden. The 18-year-old was ultimately powerless to fight off Monster Energy DRT Kawasaki’s Max Anstie. The Brit won the last Grand Prix in the sand when Jeffrey Herlings was absent (as he was in Latvia with the open wound in his little finger still too raw and prone to infection to consider racing) at Lommel in 2014, and with HRC’s Tim Gajser crashing at the start of the first moto and gritting his teeth to fourth in the second with an injured ankle, Anstie faced little other rival. He went 1-1 for the first time in his career for only his second GP win.

Jonass earned his fourth podium of the year in just his first term on factory equipment, and the result was eagerly received in this small corner of Europe.

“My heart rate felt like it was 220 in the first laps!” the jovial Latvian said. “I was getting more tired from being excited than I was from the riding. In the end it would have been good to win the first moto, but…next time.”

Behind Anstie and Jonass on the box was Harri Kullas. The Fin has been drafted in to ride Alex Tonkov’s factory FC250 Husqvarna with the Russian out for the season after shoulder surgery. Kullas has been low on luck and form due to injuries that wrecked his promise with works Yamaha and Suzuki teams. He was committed only to the British Championship for 2015 before getting the call to represent Jacky Martens’ squad, and the opportunity led to his first podium five years after he came to MX2 for the first time. “I think I surprised many people…and myself,” he said. “I was training in Belgium expecting to come here and do [a wild-card ride] MXGP when I got the call. The bike was working good straight away. Of course there is pressure being ‘factory,’ but I was thinking yesterday this is my chance to shine. I got good starts. The first ten minutes were intense in the second moto, and then it was the longest race I ever had. It was a dream come true and I always wanted to make a podium.”

Gajser limped out of the paddock, and after three crashes in the two motos Standing Construct Yamaha’s Valentin Guillod was lucky not to be doing the same. The Swiss cited a difficulty to gel with the track as the reason for his reduced speed. Countryman and Rockstar Suzuki’s Jeremy Seewer was a strong fourth.

There was mixed reaction in the paddock to Ryan Villopoto’s retirement announcement in the days leading up to the Grand Prix. To many it wasn’t a surprise due to a rumor that had sprung up several weeks after RV had departed back to the States and had re-associated with Aldon Baker. Some, like HRC’s Jean-Michel Bayle and Tony Cairoli (among others), felt that Villopoto could have handled the situation better and fulfilled a commitment to the factory Kawasaki team and the people that brought him to MXGP. Others, like Gautier Paulin, correctly stated that Villopoto must always be credited and given respect for trying MXGP in the first place.

There was a general feeling here that people questioned how much Ryan actually committed to the challenge because it seemed like the mythical Villopoto many were expecting to encounter had not shown up. It might take a little time for European fans to really appreciate the 26-year-old’s full impact on the sport. Let’s not forget that he still aced the second Grand Prix of the year in Thailand, and his effort to earn the pole position at that round was nothing short of utter dominance; it was probably the only time the “AMA” Villopoto really came out to play in MXGP.

The USA can still count on Thomas Covington, who has continued to learn his trade in MX2 at the age of 18. He was tenth overall in Latvia. Covington has been finding a better feeling with the KX250F, but he allegedly has a factory Husqvarna ride lined up for 2016, according to paddock gossip. TC is expected to be a podium contender next season after reaching the top five on a more frequent basis this term, particularly at the start of the year before one or two persistent injuries.

MXGP now breaks for a week before the last hard-pack test at Loket in the Czech Republic. Three rounds in August all venture into the sand and will be the crucial stage for Cairoli and Herlings to launch their last, strong bids for the 2015 titles.