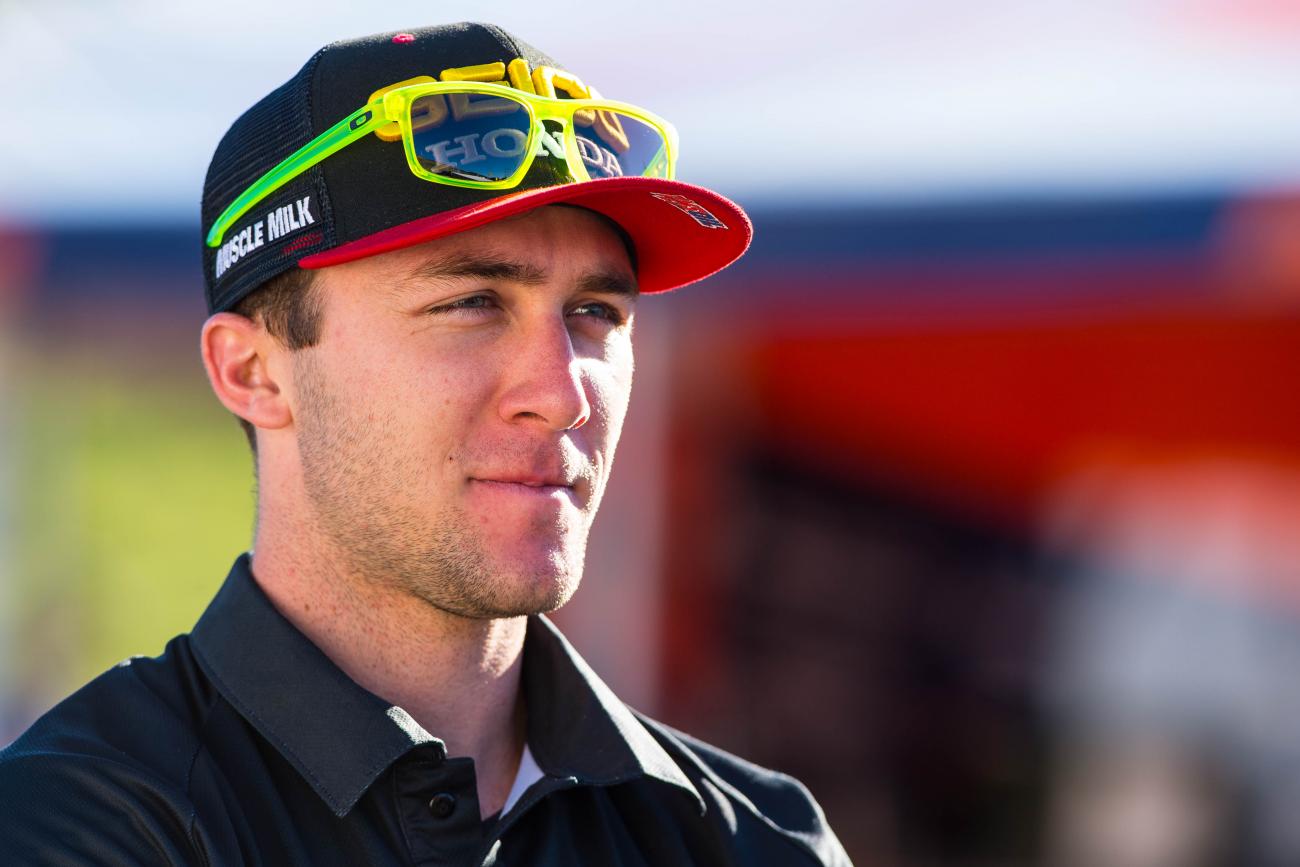 Oh, what should have been for GEICO Honda’s Eli Tomac. The man dominated—absolutely dominated—the first five motos of the Lucas Oil Pro Motocross Championship and was dominating the sixth until a vicious crash at Thunder Valley ended his season. It was one of the most sudden exits you’ll see from a championship, as Eli dislocated his right shoulder and tore the rotator cuff in his left. He’s now gone through double surgeries and still faces a long recovery to be ready for 2016. He talked to us this morning after another rough physical therapy session.

Racer X: Okay, Eli, I think the main thing people want to know is, what condition are you actually in these days?
Eli Tomac: At this point, I’m a lot better than I was initially. I’m about six and a half weeks on my left shoulder and about three weeks on my right shoulder. I actually was just cleared out of both of my slings about three days ago. Before that I was in two slings, so I was starting to go pretty crazy.

Double slings!
Yeah, double slings! I was in them both for about two weeks. Then I was able to ditch the left one for about a week, but I still had to wear my right one.

You dislocated one shoulder, but you tore the rotator cuff in the other, and from what I hear, the rotator cuff is actually supposed to be worse as far as length of recovery goes. Is that what you’ve found?
Yeah, by far, the left one, the rotator cuff, that was the bigger and more serious surgery. That’s the one I didn’t dislocate. Honestly, the right shoulder, which I dislocated and just had to have the labrum fixed a little bit, it’s actually passed the left one in strength and mobility already even though it’s only had half the time for healing. The left one is going to be the kicker, that’s what I have to work on.

From riders I’ve talked to about this before, a lot comes down to the therapy after the surgery. So how gnarly has that been?
I was hitting physical therapy five days a week right off the bat, just getting it stretched and working on that mobility. That’s the toughest part, the mobility. Now I’m down to three days a week in the physical therapy office, but I’m still doing stuff at home too.

Any kind of timetable for recovery? Is 2016 going to be a rush?
I think, ballpark, on a motorcycle, by what the doctors said, by the middle of November. That sounds like a safe bet, but it really depends. I don’t think it would be much earlier than that because that’s five months and a few weeks.

So how hard is it to be patient for that long? You’re probably not used to being on the couch for that long.
It is tough. The toughest part for me was the first couple of weeks, because I was so far out of my routine. Now, honestly, at this point I know that I have a lot of time off, so it’s somewhat relaxing too. I’ve had injuries in the past but nothing where I was out this long, so I’ve never had a break like this. Just something different.

At the races we hear you’re still helping Zach Osborne as much as you can.
Yeah. Zach’s still here at the farm. I can go out there with him at the track. My dad’s out there with him more than me, but we’re just trying to do whatever we can do to keep him fired up. He’s been improving, too, so it’s pretty cool to see.

But how interested are you in the races? Is it kind of painful to watch?
Yeah, I’m at the point where it’s almost annoying to watch. You feel like you should be out there, so that’s painful. Honestly, I’ve really only been watching the 250s, because of Zach.

I’ve heard that from a lot of riders in your situation.
It makes you mad watching when you can’t be out there. I probably should be watching to try to learn more, but at this point I’m still kind of fired up about everything.

What are the doctors saying about the injury long-term? Shoulders can be tricky.
The doctor told me, from what it sounds like, I shouldn’t have any problems getting back on a motorcycle. I’m sure it would be a different story if I was a PGA guy or a baseball player, but for what we’re doing, I should be fine. He didn’t tell me anything scary at all, so it sounds like I should make a 100 percent recovery.

Do you even have a take on the crash? Obviously, it happened quickly. What do you remember when it happened, or if you’ve gone back and watched it? What do you think even happened?
I think it could happen to anyone, at any time, on any motorcycle. It happened so fast that I think it was, by far, one of the most unexpected crashes I’ve ever had in my life. It’s not like you ever expect to crash, but this literally was out of nowhere, especially for how comfortable I felt at the time. It wasn’t like I was pushing the edge or doing anything out of the ordinary. It was just a freak accident, with the bumps, and I almost think the ground was a little slick right there too, and my rear end stepped over the braking bump and kept going. At that point it was just a big high side.

This might not be anything, but looking at the lap times, you had actually slowed down in the laps before that crash. Were you actually backing it down? I don’t know if you actually were, but the times made it look that way.
I don’t really remember, but all I know… It wasn’t like I was riding out of my mind trying to get away from [Ryan] Dungey and [Ken] Roczen any more than the lead I already had on them. That’s what was the bummer; it wasn’t like I was pushing from like third place trying to get to the front, spazzing out. I was riding a comfortable pace out front.

I think what hurt you in that situation was that you won that moto at Hangtown by such a huge margin. So then people say, “Oh, this is what he does. He tries to win motos by a massive margin to demoralize the field.” You’re saying you weren’t trying to make that lead bigger every time you saw the pit board.
No, not at all. Shoot, I very rarely ride completely crazy and out of my comfort zone. I don’t know what else to say really. It was a freak deal.

Adrenaline can be weird. As soon as you got up, did you know the injuries were this bad, or did you think you might be okay to come back the next week?
I think right when I got up I was most concerned with my head. I was okay. I was a little bit dingy, but I was okay there. Then I knew I needed to get off the track because I was hurting everywhere else. My right shoulder, I knew that was out of place. Oh, and my boot was like half off. My bootie was kind of half off, so it felt weird.

At the track that night everyone was analyzing the video, and we thought you had hurt your leg or your ankle.
Yeah, it looked like my ankle was jacked up, but it was just that my leg was in the boot all funky. It was halfway out and halfway in the boot.

When did you realize the other shoulder was bad?
The crazy thing is, Saturday night, obviously I was babying my right shoulder because it had been dislocated. I was kind of holding it. My left shoulder was just kind of sore. We went back to the hotel after we got out of the hospital, and even in the shower, I was using my left arm to shower. It was sore, but I was able to move it and wash my hair and stuff. The next morning on the drive home—we drove to the race—that’s when it blew up. The thing was hurting and constantly burning. Once we got the MRI on Monday, it turned out the left side was the big one.

So the night after the race you didn’t realize how bad it was?
Yeah, it took a day for that shoulder to get pissed off and swollen. That’s when I realized something was wrong.

The way you dominated these early motos, it was maybe the best I’d ever seen anyone ride. It was unreal. That feeling, is that repeatable? Do you think you can get back there, or where you in some crazy zone?
I don’t know yet. That was by far the best I’d felt… It was just a combination of things—a motorcycle that was working really well and it I wasn’t really pushing the edge. That was the cool thing. My motorcycle was so good and I was so comfortable at that pace—it was like no big deal.

The track was super-rutted and rough because there was rain before the race. Did it seem exceptionally rough for you, or have you ridden on worse?
To me, it was just a good, rough national track. My comment on the rough tracks is: I think rough tracks should stay. It was a good, rough track. There’s two ways to look at it: Rough tracks, guys go slower, but maybe it can bite you, but with smoother tracks it’s more high speed faster, so maybe you can potentially have a bigger crash. I like the rougher tracks because they separate guys and bike setups and everything that comes with it. Even though a rough section ate me up, I’m totally for a rough track.

I saw some riders went way around the outside in that turn. Did you consider the outside? The inside was nasty, but you had handled it all day until that point. Did you think about changing lines?
I didn’t think about that because those first five motos, I was so comfortable hitting bumps that even the big bumps didn’t feel big or feel scary. I didn’t even consider it.

A month and a half later, how do you feel about this? Obviously besides the injury, this is also a championship you wanted to win, and now you’re out of it.
Like I said before, the first two weeks were the hardest. Just accepting defeat like that, and to go out like that, it was terrible. At this point now, I can swallow it because it just is what it is. Injuries are just part of the sport, and I should be able to make a full recovery. I’ve got a lot of years left in me. My dad told me, “Hey, you’re 22 years old, you know? If you race into your thirties, you’ve still got eight more years worth of racing, so don’t be too hard on yourself.”

Well, that’s the best news of all. This injury shouldn’t plague you forever, and maybe you’ll be back at this level this time next year.
Yeah. Maybe I won’t be where I was this year in January, but I should be in pretty good shape. We’ll see.