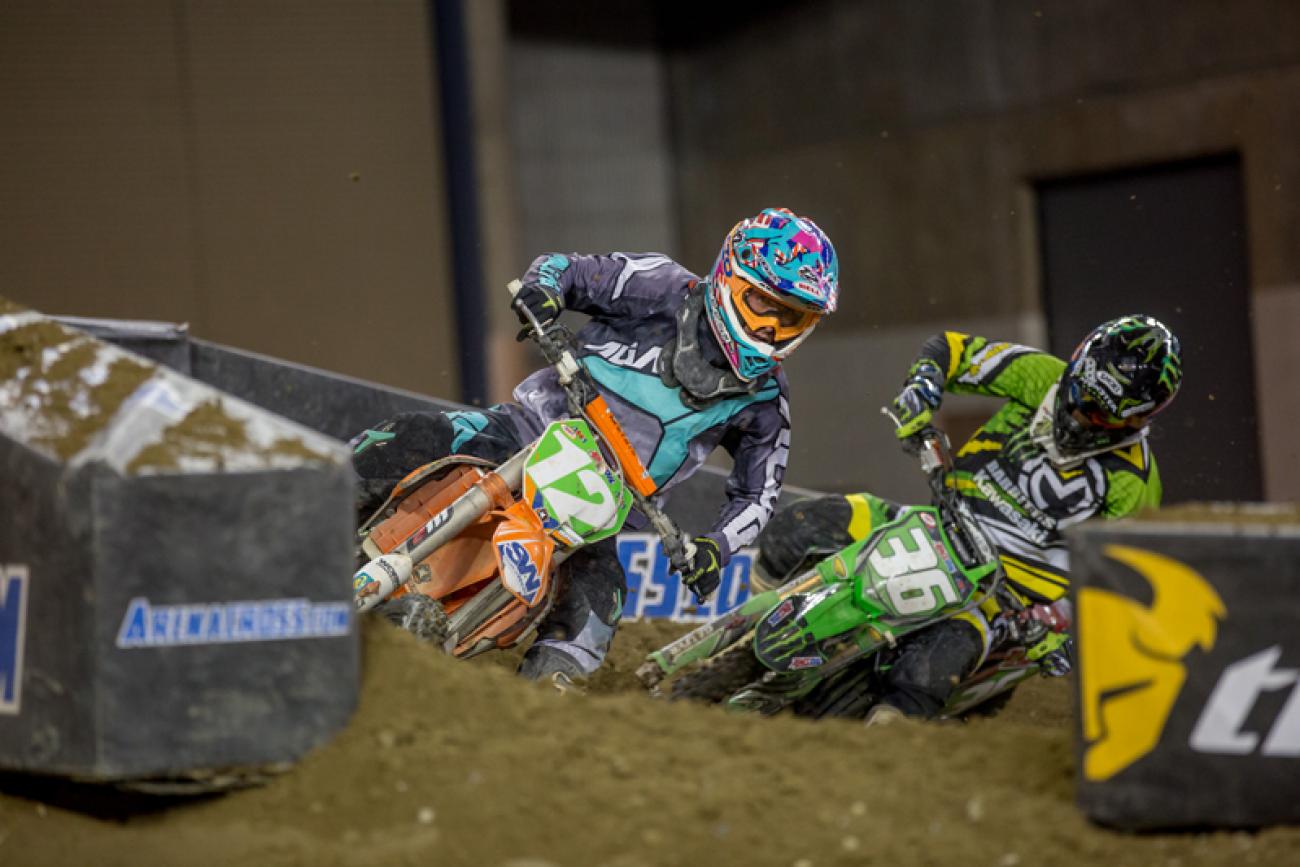 It looks like I’ve survived the first week of Revolver, so Racer X is giving me another round. Let me start this off with something I love about the sport of motocross.

I get a text out the blue from a friend I’ve known for almost twenty years, Jeremy Maul. He says he'll be coming in this Wednesday night and wants to meet up. He’s in town with his new tour-bus company and his friends the Word Alive. They’re playing a small venue not far from my house. I went from knocking out my latest Revolver to catching a loud heavy metal concert, and then catching up on my latest homework.

And, man, were they loud!

I’m usually not into that kind of music, but damn, these guys killed it, and to sit back and watch the crazy kids mosh and stage dive was a riot.

It was very cool to meet a couple of the band members and share stories of traveling the world, chasing our dreams, and experiencing chaos along the way. If you get a chance to see the Word Alive on their small-venue Midwest tour, remember the name Luke Holland, their bad-ass 21-year-old drummer. Sounded like he has some big things coming up. And I could never imagine such a powerful voice could come out of lead singer Telle Smith's voice for sixty minutes.

Anyway, my point of this little opening is that the motocross world is such a small-knit family that we all have friends spread across the country, and on any day, you might hear from one of them and get to share in what they have going on in their life outside of moto. I so enjoy those random moments. Thanks, Jeremy, for the show.

So, with my ears ringing and a couple shots of Crown flowing through my body, let’s get into the latest Revolver.

With the Amsoil Arenacross Series wrapping up this weekend in Vegas, let’s give the AX series and boys some love. The series has changed tremendously over the years since Bud Man (Buddy Antunez) and I used to try and kill each other over a seventy-two-main-event season. Gone are the two classes and my beloved Dash for Cash, replaced with a two-moto format, the match races, and some briefcases. Some weekends they race on two nights, while others they only race on one.

I had a chance to catch some arenacross racing a few weeks back when the series rolled through Council Bluffs, Iowa, just across the river from Omaha. I wasn’t disappointed.

I met up with a lot of old friends, and within the first hour of heat races, I saw three take-outs, one fight, and some intense old-school racing. Like the old days, the series is a mixture of young, (Jacob Hayes, Gavin Faith, Gared Steinke) and old (Kyle Regal, Matt Goerke, Chris Blose, and Bobby Kiniry). The “old guys” have come from supercross to lengthen their careers, like Bud Man, Swap (Chad Pederson), and I did over fifteen years ago, while the “young guns” are hoping to use the series to make an eventual move to supercross.

I tried my hand many times at individual AX races before I jumped fully into the series in 1997 with TUF Racing Honda. The Mike Kidd series was always a fun winter race to hit when I was growing up, and I got to battle with Dennis Hawthorne, Jason Langford, and Grayson Goodman. They were tough races, and they kicked my ass more than a few times in the 1990s when I’d catch one while racing supercross.

I broke my leg on the second lap of practice in Des Moines one winter. In Lincoln, Nebraska, I crashed into the wall and smashed my fingers after yelling some choice words at the crowd, since I was only there for one night and would be jetting off the next morning for the San Diego Supercross. Needless to say, I didn’t make it to sunny San Diego. That was a fun call to my dad.

But my most memorable night came when I finally redeemed myself at the 1994 Des Moines event after all that heartache. I led Saturday night’s 125 main until the final lap, when I cased the catapult and gave my longtime friend and local hero Swap an opening on the outside. Well, as anyone knew in arenacross, don’t ever try to go around the outside. I punted my friend over the berm and took the win. Needless to say, that wasn’t a very popular move with the Iowa crowd. Pederson is from Iowa!

As I took my victory lap with my fist in the air, the crowd booed me and flipped me off over the wall like it was a WWE event. But I didn’t care. After a couple of years of foolish injuries, I was finally back on top of the podium at an AX event, and I had a lot of friends, family, and fans over from Omaha to watch me take the win.

There wasn’t really a podium back then; the legendary Robbie Floyd would just interview us on the start straight. He first interviewed Chad, who basically said that move sucked, but that he would’ve done the exact same thing to me.

Then it was my turn. I would like to remember being rained down with beer and popcorn, but that might be exaggerating the moment. I did say, "As you heard from Swap, he was cool with the move, and if you all can’t appreciate a good race, you can all kiss my ass."

Sometimes I don’t really think before I speak.

In my mind, this was my home race too, and I got that monkey off my back. And, hey, I signed autographs well into the night, so I guess not everyone wanted to kill me.

So, that’s my story, and I’m sticking with it. I’m gonna wrap this up. I need to get to sleep. I have a double-header of little league baseball tomorrow night. Make sure and check out this Friday night’s Amsoil Arenacross; the series is tied going into this incredible finale!

The event will feature a battle between Jacob Hayes on the Team Babbitt’s Monster Energy Kawasaki and veteran motocrosser Kyle Regal on his Rockstar/TiLube Husqvarna. It will no doubt be a knock-down drag-out battle for the ages. And, if one of them doesn’t tell the other afterwards to kiss his butt, I’ll be highly disappointed.