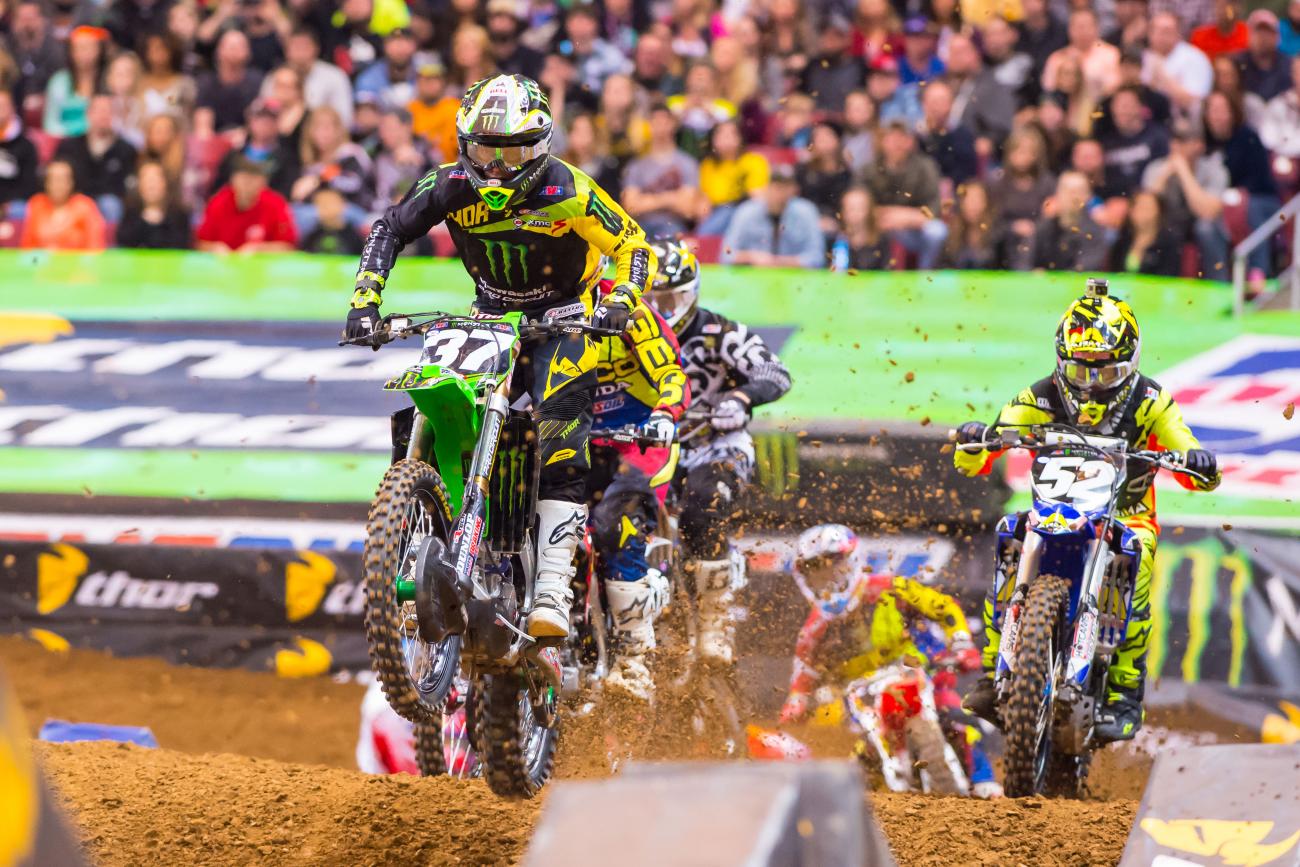 Time to wrap this series up! It’s been a long four months of racing action. Riders have been training and riding all things supercross for more like seven months straight, making Vegas a welcome sight. Not only does it signify the end of the line, but it’s also Las Vegas! Most sane people don’t need a good reason to visit this vacation hotspot, but if you do, this weekend offers plenty. Supercross is my reason, but there’s also the Floyd Mayweather/Manny Pacquiao fight, the gambling lure of the Kentucky Derby, and Cinco de Mayo looming just around the corner. In other words, buckle up because it’s going to get weird in the desert.

The whole vibe of this event is different, too. Riders are much more jovial on the starting line, and the pressure of the season seems to be gone. Of course, once the gate drops, it’s racing, and don’t discount that, but everyone seems to be in a better mood in Las Vegas from beginning to end. That’s more than I can say for the people at the casinos or the sports book.

The Las Vegas track is always a bit different than the rest of the series. The “outside” portion of the track is easily the fastest section on the calendar. Monster Alley, as it’s known, is as close to wide open as a 450 sees in supercross worldwide. Not only that, but it comes just after the first turn!

For those not fortunate enough to ever come screaming into Sam Boyd Stadium on a dirt bike, take comfort in the fact that your chest, arms, and shoulders will never know the brutality that those rocks and dirt clods inflict. It’s so intense that many years I would have to wear a shirt to the pool on Sunday because of the severe bruising suffered on Saturday night. If not for the adrenalin of racing, riders would be swerving back and forth to avoid that roost spray. Instead, we have to hide at the pool on Sunday. And to think I had just spent seven months working out to prepare for it!

This year’s track map is typical Vegas. It’s very long compared to the norm and will feature lots of rhythm sections and lots of whoops. The lap times are usually in the 1:06 region, significantly higher than the 50–54 second lap times at most rounds. There’s an interesting section comprised of three step-onto-tabletops in a row that will be tricky for the 250 riders. Their level of difficulty all depends on how they are sloped and shaped.

That leads into what could be a quad, or a 3-1 at minimum. There are two whoops sections, and as with the tabletops, they could be very easy or very difficult. Vegas has been a grab bag on the whoop difficulty. It has almost alternated year to year from big and treacherous to fast and easy. One change this year is the exit strategy on the outer portion. Typically, the exit follows the wall of the stadium, making for a very fast departure and re-entry.

This year, though, there’s a switchback and sand section before heading off into the desert darkness (although be warned that we’ve seen sections like this on a Vegas track map before, only to see that section go poof like something in a magic show on the strip on race day). If that switchback really is there, it won’t affect too much, other than slowing the track down and adding to the lap time, both of which are positives.

Last week Eli Tomac won his third race of the season in impressive fashion. He reeled in fellow Honda rider Cole Seely from a ways back and rode a smart race on a very treacherous New Jersey track. He’s been on the podium week in and week out lately, and has to be excited about turning the points back to zero soon.

Marvin Musquin won his first American championship and is brimming with confidence. This shootout doesn’t mean much in the grand scheme of things, but it is a chance to show who’s boss, and that’s key since we’re about to merge the East and West Regions for summer. Many will say these Vegas races don’t matter, but Jeremy Martin and Cooper Webb were really fast there last year, and then they went 1-2 at the first national two weeks later.

Speaking of which, Webb will want to win the shootout for the same reasons as Musquin. He’s been lightning fast in 2015 and is an absolute contender for the Lucas Oil Pro Motocross Championship. He and Musquin are both running red hot, so it will be interesting to finally see them head to head.

Blake Baggett has a legitimate shot at finishing fourth in this championship. Read that again if you didn’t believe me or comprehend what I just told you. Great series for Baggett, and he showed that he can indeed be a player indoors.

Kyle Chisholm scored a season-high eighth-place last Saturday. He has been getting better and better as the season has progressed. He doesn’t have the most backing in the pits to say the least, so to see the likable Floridian well inside the top ten is a welcome change.

Chad Reed has had a rough few weeks. He could’ve had two podiums in a row coming into New Jersey, but untimely crashes vanquished those hopes. He’s dealing with back and shoulder issues and is a question mark for Vegas this weekend. Hopefully he can work out the kinks and be 100 percent by Saturday.

Justin Barcia probably wants to forget 2015 at this point. A rough start followed by an injury followed by more rough times have left him longing for a clean slate on May 16. There were high hopes for the #51, and for everyone’s sake in North Carolina, hopefully he can produce.

Justin Barcia runs out of gas somewhere in the desert and Weston Peick rescues him via his Toyota Tundra.

Floyd Mayweather catches wind of the supercross buzz, and in his style, claims that he could dominate the sport at will. He decides to ride practice before his bout with Manny Pacquiao later that night. In his first ten seconds on the track, he whiskey throttles violently out of sight. He suffers injuries, keeping him out of the night’s bout and officially his record is 48-1 after being KO’d by a 450cc dirt bike in the first round.

Ryan Dungey closes out the series with another win.

Cooper Webb and Marvin Musquin battle it out, giving the fans the best race of the season.