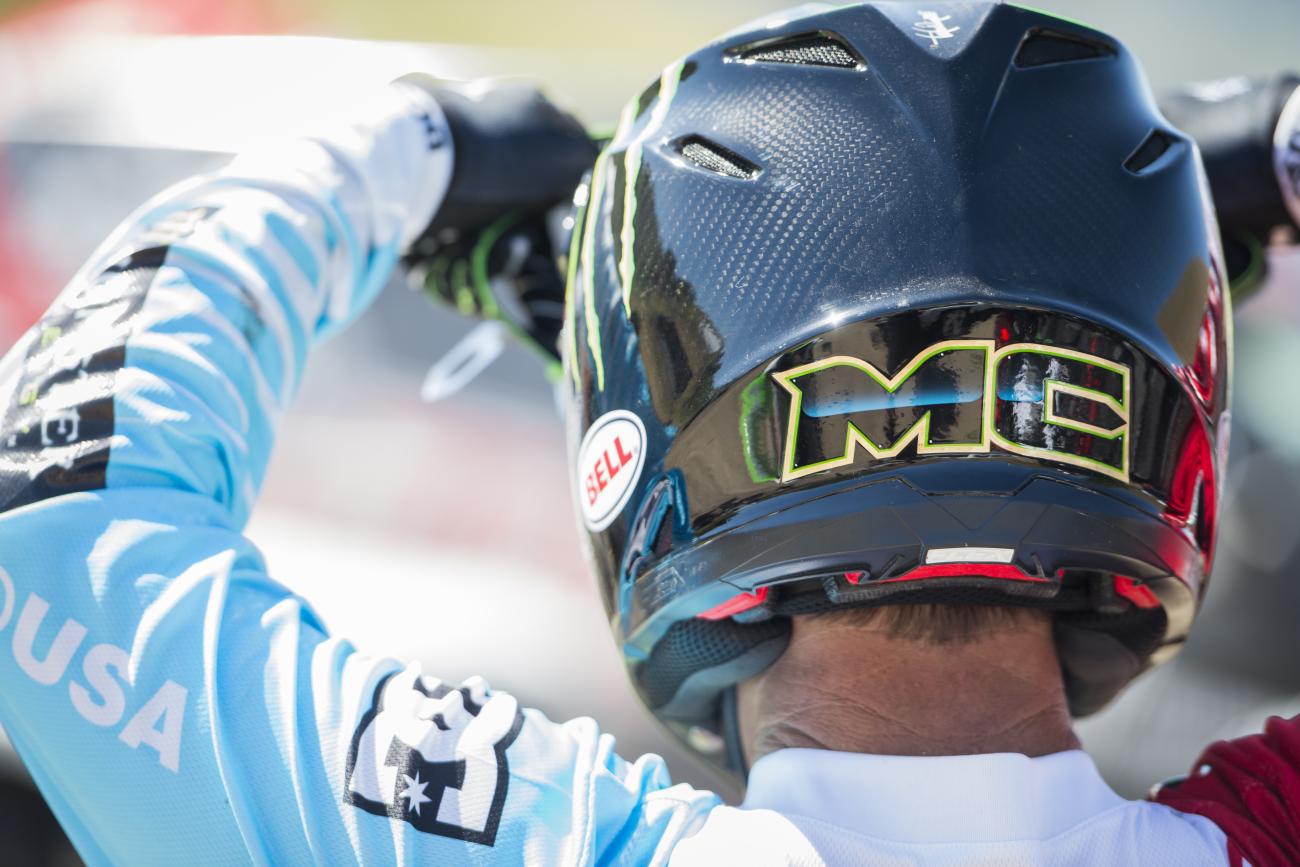 Jeremy McGrath needs no introduction. The King recently attended the launch of the new Bell Moto 9 Flex helmet. Bell had rented out the scenic Castillo Ranch, which is located in the foothills of California’s central coast and perhaps better known as the filming site for many of the crazy 1990s freestyle videos. In addition to McGrath, Bell had also invited along freestyle riders Lance Coury, Brett Cue, and Destin Cantrell.

McGrath has worn Bell Helmets pretty much his whole career, and because he’s on good terms with his old sponsors, he came out for a day of riding and fun. While he might be retired and no longer racing, McGrath is still a great fan and amazing ambassador of the sport. We grabbed him for a few minutes while he was loading up his truck and winding down from an amazing day of riding and learning about advancements in new helmet technology.

Racer X: Jeremy, good to see you out here. With Bell Helmets, it seems like you have worn them your entire career. Talk a little bit about your relationship with them and what brings you out here today.
Jeremy McGrath: Yeah, that’s right. I have pretty much worn a Bell my whole life. I did wear a TLD helmet for a short period there, but now I’m back with Bell, like I never left. The new helmet’s super sweet. I’m like a kid when I open that box and see the fresh paint and new designs. But for me, to be able to still be involved in these fun events, it’s just super cool. It’s kind of a natural thing to be here for me, and I’m excited about it!

Talk a little bit about the Castillo Ranch and riding here. You were here a bunch of times during your career and for a lot of photo shoots. How many times have you been here total? How often do you make it up here?
I haven’t been here in a few years, so that’s kind of one of the other reasons I was so excited to come. I spent a lot of the nineties up here when I was riding for Honda and did a lot of video filming up here. We spent a ton of time over there on the supercross track, out by the front. But for me, it’s always exciting to come up here. Jim’s [Castillo] a good friend of mine and so are his kids, Davey [Castillo], and stuff like that. Whenever someone says Castillo Ranch, [I always say] “Let’s go ride. You got to make time for it.” That’s another thing. But it’s been a great day and I had a ton of fun!

[Ed. note: There was a kicker ramp made from steel and dug into the side of a hill. It was overgrown with weeds and looked like a huge hit that no one had done in years. McGrath went over along with the freestyle guys and proceeded to put on a jumping clinic.]

That jump back on the side of the hill—you still had something for the freestyle guys. In fact, you had a lot for them, actually. You were the only one jumping the thing at first, and you looked really good doing it. You still have it, man.
I hit that jump years and years ago, maybe in the nineties. It’s been a long time, but I know it pretty well. I also know it’s one of the most fun jumps I’ve ever hit, really. We were all kind of swarming around, and I was like, we got to hit it. Those guys, I thought for sure when we went over there at least they would hit it and I would just be able to do what they do and maybe follow one of them over it. But it didn’t work out that way, and I nailed it first. I was pretty nervous for sure, but I was glad I could still show them the way at my ripe old age [laughs].

How’s your deal with Kawi going so far?
It’s going good. It takes some time to put the wheels in motion on some of the stuff we want to do, but obviously I’ve been doing dealer signings and the regular PR stuff like that. We also have some corporate events coming up, but the thing I’m looking forward to is the Team Green camps, which are planned for later in the summer. Those will really kick off some of the more specific things for me, with regard to working with some of the kids.

That’s cool. I had kind of heard about those, but wasn’t sure what they are all about. Where are the camps going to be held?
Out at my ranch. They are going to be an exclusive Team Green rider deal, so it’ll be super fun, but only open to those guys that have Team Green rides. We also have some regional contests going on with KX sales, and then we’re also going to do some track days in a few different areas, which will be awesome. I’m just kind of fitting in with some programs where I can, along with what they are already doing.

Switching gears here—how is the family stuff? How’s your wife doing?
She’s doing good. She’s still doing some therapy and some stuff for the blood and all that. Things could be a little bit better, but she’s not bad at all, and it’s going in the right direction. But I’m as busy as ever with everything I’m doing, and then we have two kids, so I’m busy doing that, too. Fortunately I get to spend a lot of time with them, and that’s what’s most important.

Is she in remission?
She doesn’t have leukemia anymore, so there’s no remission. When you get a bone marrow transplant you have a whole new donor system. So there are some side effects from that, and those are things they’re trying to… It takes a while, years and years, to get under control. So far so good, though. We got her here still.

You also have your truck racing going on. Tell me a little bit about that. I thought I recalled someone along the way saying that you were funding the program yourself?
It’s weird. I’m retired from racing [bikes] but I’m still racing Lucas Oil Off-Road Series in my truck. But yeah, I race the Lucas Oil truck series, and the season just started, so the last two months have been super crazy for me. But things are going well. The truck’s good, the team’s good. We had a great first weekend, so I’m pleased with what’s going on. It’s my program, but I have sponsors as well, including LocTite and Fuel Off-Road Wheels. So there’s a lot of money being raised. I spent some. But you know, you can never keep a budget racing, especially in auto racing.

What is that old saying about making a million dollars racing? Start with two, or something like that?
Yeah, try ten!

Switching back to motocross. In the last week or two, there has been a lot of discussion around safety, and due to what seems like an increase, though it’s hard to measure, in injuries and head injuries. What are your thoughts on that?
Naturally people get hurt. It’s the same discussion as it’s been for years. Are the bikes too fast? Are they too heavy? I don’t know. It sure seems like you get better racing when you get slower bikes. But as with anything, everyone’s riding faster. It always gets better and better along the way. It seems like they could keep better data of what’s going on and who’s crashing and how it’s happening and all that stuff, and then maybe there’s a way they can start to come up with something. Everyone wants to sweep it under the rug. It’s a challenge because you’re not going to get data from every local track, but what if you could? What if there was a website you could go to and log in and find out “This is what happened with this, this, and this.” And then they could figure out how to help people. I don’t know. Is there a deal where you have to get mandatory on some protective gear or something like that? I don’t know. It’s a crazy thing because I’m fortunate I don’t have to take those risks anymore. If I don’t want to go fast I just slow down. But every time I ride I know there’s a chance of something happening.

[Kevin] Windham and [Jeff] Emig were recently on the PulpMX Show and it seems like the last few weeks have been ripe with lots of discussion about it. It’s interesting to hear what your position is on the matter.
I don’t know how you fix it. Every person riding a bike is a different person, so how do you control that? You can’t fix the people riding the bikes. It’s a tough one. That one’s a discussion that could last a lifetime.