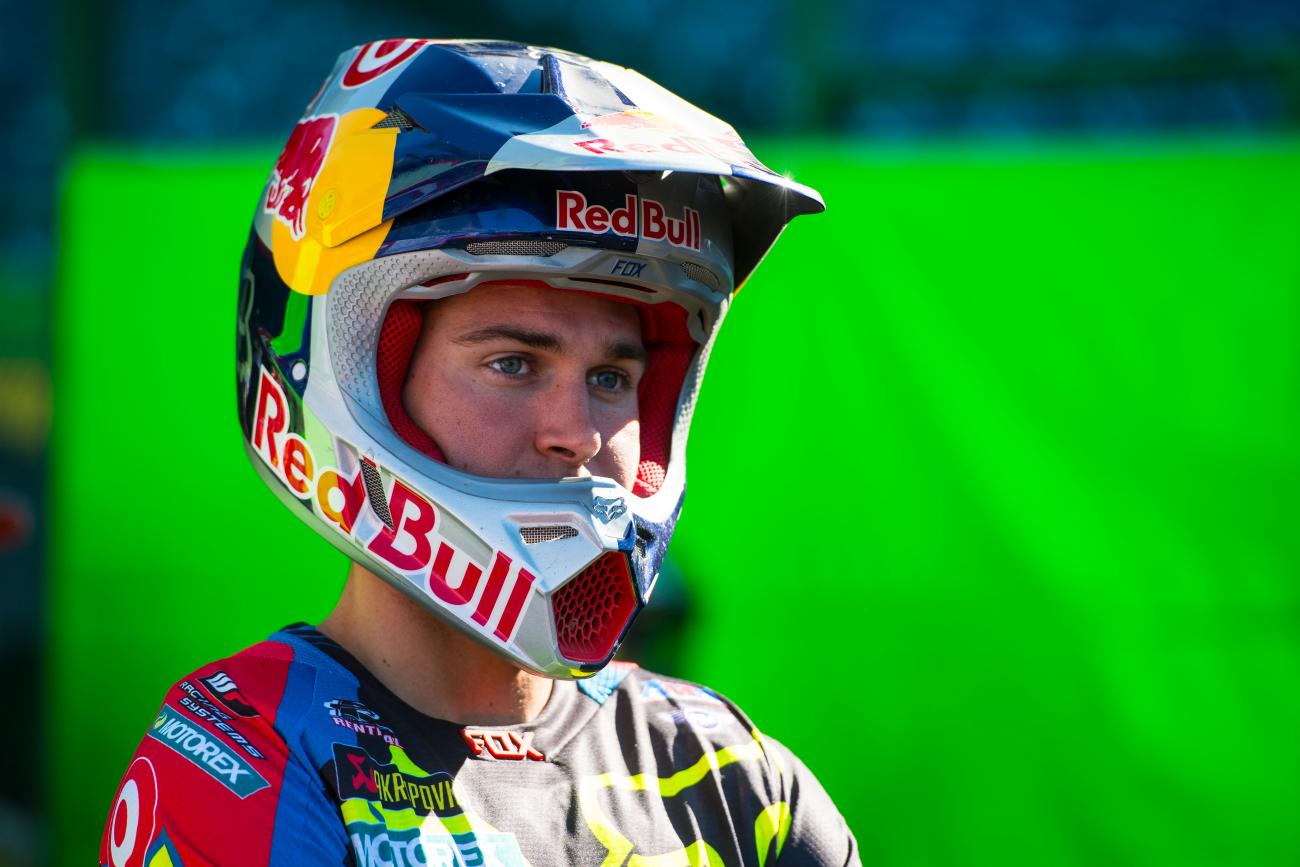 The race was good. I got a decent start. I kind of snuck around that inside, but the second turn got bunched up and things kind of got chaos from there. I got pushed around a little bit. I was able to hold my position and then make a couple passes into second. Kenny [Roczen] had a little bit of a lead by then. He kind of got away those first few laps. I was able to close that in half and kind of stayed there. About lap fifteen it kind of just stayed about that three-second mark. I was pushing my tires to the limit, giving it all I got. Track was going quick. It was a positive. I’ve got to take that and build on it. I’m happy with the night and the way the bike worked. The team did an awesome job.

You looked quicker, I feel, than the first two rounds. This looked like a step forward to me from what I could see.
Coming in the season we did all the testing, but I think the real testing is the first race. There were a couple tweaks. We weren’t far off. I think a couple weeks of testing have done us good and now I can ride. Just focus on putting in laps and go from there. Still a lot left, and for a rider that’s satisfying. – Jason Weigandt

Talk about the night. You had kind of a weird progression through the night.
Yeah, weird night. I was like fourth in practice; heat race wasn’t good. Getting an eighth place sends you to the semi obviously, and that ends up getting a bad gate pick for the main. So I had to go through the semi. Main event time wasn’t quite there on the start. I made a couple passes and dodged a few bullets early on. Got into third and then basically just kind of stayed like that. I tried to make a little bit of a push here and there, but it was a slick track, a little bit funky. There were crashes all night, so I think it was a sleeper track that could come up and bite you, so I was somewhat satisfied with third.

What was the difference between last week and this week for you?
It’s the starts. Yes, it’s annoying when everyone says that but there’s too many fast guys to start in even seventh or sixth place right now. If a Roczen gets out there, holeshots, or if I get out there and holeshot and he’s in seventh, it’s going to be the same story unless you’re doing something really special.

You had kind of an interesting line over here. Was it a quad? Was that the first time that we saw you pull that off all night?
There was a double quad in there after the starting line. They mellowed out the landing for the night show, and I think myself and [Justin] Barcia were doing it. I don’t know if the other two were doing it, but that was kind of fun, pretty big. Hopefully the fans liked it. And then there was a split lane that I caught onto during the night show also. The inside was better for me and I made a few passes there.

During the day it seemed like hardly anybody was using that inside.
I think something changed, or I don’t know. It ended up turning into a double-triple and it was faster. – Weigandt

You were set up to do good things, but our buddy Andrew Short crashed and you got caught up in it. But it looked like you had good speed.
Yeah, I felt like I was ripping again. I had a good week last week, a good week the week before, and this week I felt like I was going to do good again. I was trying to make passes and get up there, but I came up on Shorty and I came up on [Jake] Weimer…bad luck. But I’m still third in points, just trying to keep progressing.

I actually thought your ride last week was better than the second at Anaheim 1. Maybe it didn’t pay as well in the bonus department, but…
Yeah, it was good. I was kind of bummed on my starts. I was actually happy with tonight because I executed a start; it was a well-executed race just with bad luck. Last week was the worst executed beginning of a race. That happens, but I’m glad I fixed it during the week and fixed it for tonight. I thought I had the holeshot, but this first turn was tricky. My holeshot device was locked in, so my forks had nowhere to go. It’s all-good, though, I was up front, and that’s my goal, to be up front. I was third, so I was stoked. – Steve Matthes

There was nothing to really separate guys. Everybody was doing the same rhythms. It was just about landing the rhythms perfect, which is what I did wrong. Mid-race there were a couple rhythms I just did not get the triple out, and I just stopped when I cased it. That cost me a lot of time, and I’ve just got to fix that and make sure I hit my marks and clear all the jumps and we’ll be fine.

Anything else happen? Last lap I’m like, “He’s got this.” What’s your take on that last lap there?
[Laughs] Cooper is a punk! No, I’m kidding. Totally kidding. It’s cool. I would have done the same thing, except I probably would have been not as nice! I probably would have been worse. You’ve got to do it. It’s for the win, it’s the last turn and it’s racing. I could have came into that turn and blocked the inside, and Cooper would have ran around me and hit the triple still, or I could have did what I did and hopefully got out of there before he was there. Unfortunately I was just a hair too late. We’ll just come into next weekend smarter. Bottom line is I gave up a lot of time mid-race and I just can’t do that anymore.

That’s the thing—everybody always says, “Don’t leave the door open.” It’s not that easy. It’s difficult when you’re in the lead and guys are right behind you.
It’s supercross—nothing’s easy out of a corner. That triple there, I’ve been struggling with it all night. That’s one of the spots I was losing a lot of time. I’d come through the corner, drag my pegs in the rut, and kind of case the triple. Cooper was able to scrub it a little bit better than me, so he was gaining a lot of time there. Also, the other triple—same thing. So I came into that corner and I could have blocked the inside, and then I would have had to double the triple, which is what happened with Cooper. He had to double the triple. If I would have doubled it he would have tripled it over me. Or I could have went wide and did what I did, and that’s what happened. Only thing I could have done better was, like I said, middle of the race just not let him catch me. I made the mistakes early on and by the time I settled down and got into my groove it was too late. Just got to go into next weekend smarter.

With your arenacross title experience, we all knew you’d be smart, consistent. You know how to win titles. But your speed has also been good; you’re in the mix on lap times every week. Are you happy with where your pace is?
Yeah, definitely. The good news is my Monster Energy/Pro Circuit Kawasaki makes it easy. When I go fast I don’t feel like I’m going that fast. Sometimes in practice I get a little bit in over my head and I just go for it too hard and get frustrated and you’re trying to set that fast lap and you actually go slower. So this weekend my goal was just to let it come to me, ride a little bit, and everything would come around. I qualified really good this weekend and felt good on the bike. We made very minor changes all night and I think that’s what we need to do every weekend. We’ve got a good package with the bike. It works every track we go to. I’m very confident in the bike and I’m very confident in myself. I think from here on out we’re going to be fine. – Weigandt

You’re hanging in there better than a lot of us so called experts—myself, Jason Thomas, Jason Weigandt—would have thought you could with a banged up thumb. How much is it holding you back?
Um, last weekend it was really bad. The gap on the break is starting to close up a little bit, and I actually got to do 10-15 laps at the track this week, so that was an improvement. And my starts are the main thing that’s saving me right now. I’m putting myself in a great position where I don’t have to battle with guys all the time.

Tonight’s race was good, just fighting the best you can.
Yeah, only 10 points out of the championship lead. Like you said, a lot of people thought I would have stopped two races ago, so it’s good to fight through, and in two week’s time I feel like I’m at a different level than I am now. The only thing is, even the way I am riding right now, I feel like I’m letting myself down a little bit. I’m holeshotting and I’m just not riding awesome. Even with the injury, I’m just making it harder on myself than it has to be. It’s coming around though. – Matthes