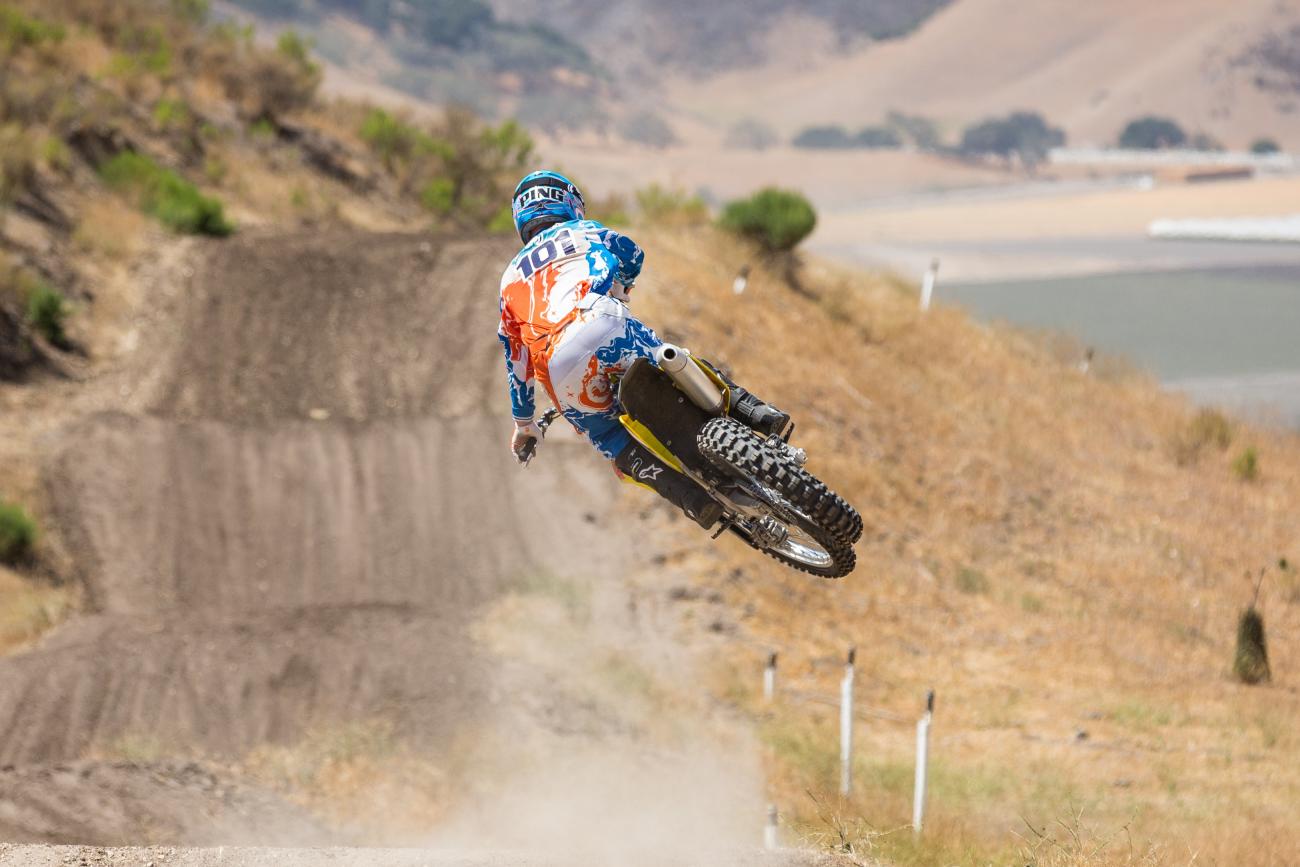 Like everyone else I was excited for A1, but possibly for different reason. As a mechanic by trade, and someone who enjoys tinkering with their bike almost as much as riding it, I'm always super interested in trying to spy the latest and greatest trick pieces on the new bikes.

This year what stood out to me were the wacky out-of-this-world long front brake hoses. I've never in my life seen a brake hose rise 3-4" straight up over the cross bar. What gives? Is it a travel issue with the new SFF? Possibly just the latest incarnation of swag? I captured a screen shot which shows in on 3 different brands. Having just installed a big brake kit and new lines last week I hope I'm not already behind the times! Let me know if I'll have to go spend more dough.

I’m actually shocked that you didn’t pick up on this. You really don’t know why the brake lines are elevated like that? Look at the photo again. Do it. Where was it taken? Starting line, right? You probably didn’t notice the long brake lines in pit pictures where the bike is on a stand. You getting it yet? Fire up that weed-whacker engine of a brain and figure this one out. Nothing? Okay, a start device that locks the forks down (should be illegal in pro racing, in my opinion—that’s another rant, though) holds the fork midway down in the stroke. What happens to the brake line when the fork is compressed? It rises. And freaks out fans like yourself who didn’t get the puzzle pieces put together. Don’t beat yourself up… simple mistake. But MENSA isn’t going to allow you to join any time soon.

You just inherited the head honcho role of the Monster Energy/Kawasaki Team. Your first task is to find a rider to replace Wil Hahn. Who would you chose and why? Don't let this new role go to your head.......

The first thing I would do is turn in my two-weeks notice and look for another job. The team manager position is an all-consuming venture and it doesn’t lend itself to being a husband or a dad or a human being with any life whatsoever outside of dirt bikes. However, since we are just playing a silly little hypothetical game here, I’ll humor you. First step here is to crack a 40oz and pour it out for my homie Wilbur. Nobody likes that he got hurt, and putting a rider in his seat seems like throwing salt in the wound. But sponsors want another rider out there, so it is part of the business. The hard part here is that guys you would want to hire to fill in have already cobbled together programs of their own that they can’t likely get out of easily. I would see if Brett Metcalfe had a way out of his contract. If that didn’t work I would approach Jake Weimer, who could likely get the Tedders to let him go for the rest of the SX series. If that didn’t work out I would put Nick Wey in the spot for the West rounds and then give Tyler Bowers a shot on the East Coast. Those are my decisions, and if you don’t like them pack your tools and hit the road, you’re fired. Oh, man, the power already went to my head. Sorry about that.

I’ve been arguing with my bench racing buddies all week about the move Tyler Bowers put on Zach Osbourne at A1. Half of us think it was within reason and the other half think it was way out of line and not the kind of racing we need in the sport. What say you?

I don’t get all the chatter about this. Have we turned into such a whiney bunch of bit**es that any contact is taboo? Let me just clarify that if I was Zach Osborne, I would be totally pissed. It ruined his heat race and broke his thumb, and that will wear on him for several weeks. But Tyler didn’t do anything wrong. In fact, Zach ran it in on him pretty hard two turns earlier and made a very aggressive pass on Tyler. Any time you make an aggressive move on another rider you have to expect that he is going to come right back if the opportunity presents itself; that’s day one stuff on the pro circuit. Tyler ran it in hot but Zach should have been expecting it and either protected the line better or cut back underneath him. It sucks that Zach got hurt in the ordeal, but if we start condemning good, hard racing like that we are on our way to becoming golf or shuffleboard or some other zero-impact hobby for sissies, and I’m not interested in that. Here’s hoping Zacho heals up quickly and Tyler keeps racing like he wants to win.

Have a question for Ping? Send it to Ping@racerxonline.com