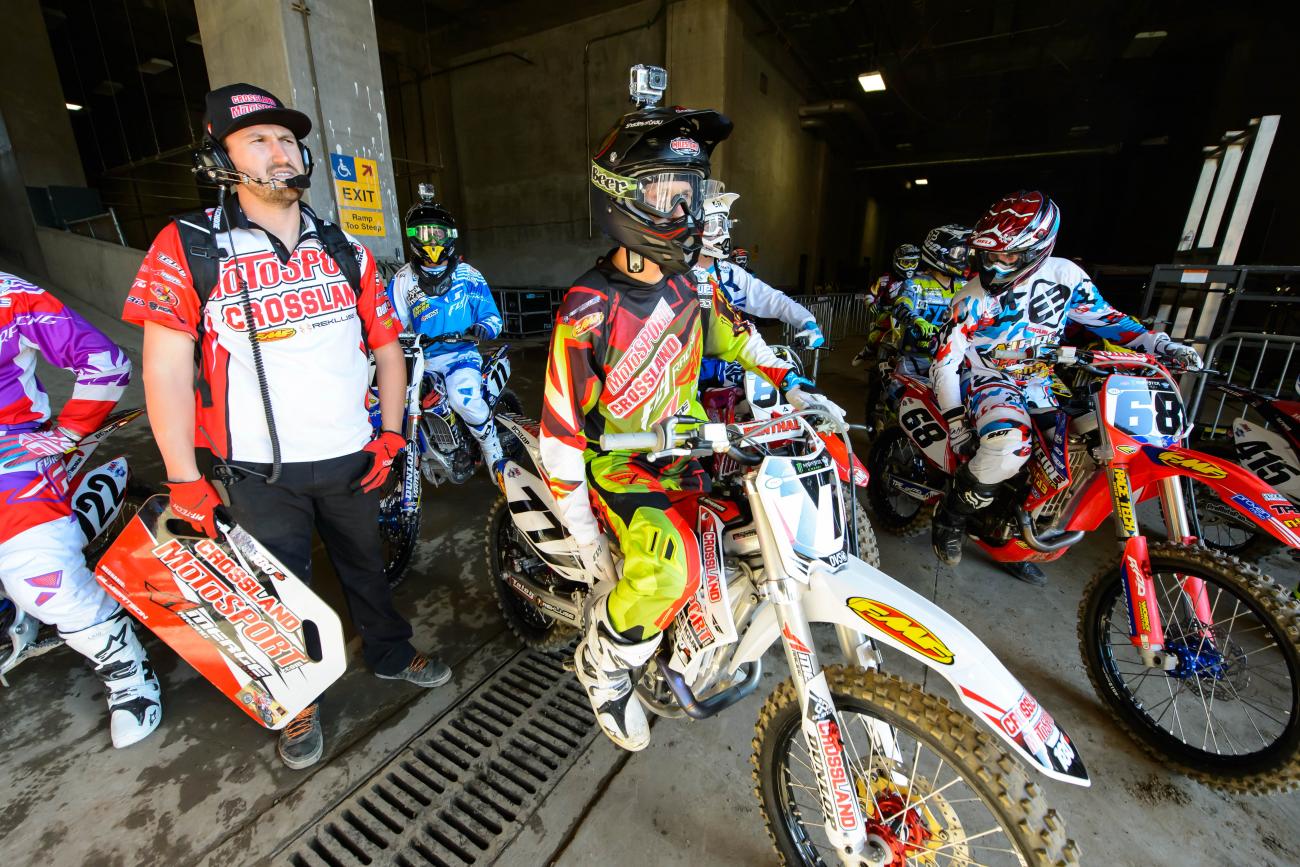 With Anaheim 1 less than a week away, it’s safe to say the teams and riders of Monster Energy Supercross are in a frenzy getting ready for yet another season of racing. And of all the guys who are scrambling, few are scrambling harder than Gregg Albertson, brother and mechanic of Jimmy Albertson. We got in touch with Gregg to shed a little light on what it’s like to be a mechanic at zero hour.

Racer X: Things must be crazy for you right now.
Gregg Albertson: Yeah, it sucks for everyone right now to say the least, but we’ve got some pretty good support from Yamaha this year, and that’s making things a little easier.

Take us through a typical day for you right now.
It just depends on the day. If I’ve got parts and there’s stuff to do at the shop, I’ll stay at the shop. If there’s stuff to do riding-wise I’ll go with Jimmy and we’ll ride together. I think he likes having me there as an eye to check out what he’s doing, and to help out in any way I can. So the days I can afford to go to the track with him I do, but the days when I’m super swamped, like today I’m building a race engine, I send him out by himself.

What kind of sleep schedule are you on?
If I’ve had a long day I’ll make sure I get a good night’s sleep, so I’ll wake up when I’m rested then I work until I can’t work anymore. I’m not the guy who wakes up at the crack of dawn unless I have to. I’d rather start at nine and work late than get up super early. We’re not nine-to-fivers; there’s a specific amount of work that needs to get done, and maybe one week it takes eighty hours and the next it only takes forty.

Are you spending your time in Southern California or Oklahoma?
We just got out to Southern California last week. We’ve got a really nice setup in Oklahoma—Trey Canard lets us work out of his shop and Merge Racing is just a couple hours south—so we try not to come out to California until we really have to. Right now I’m working out of a two-car garage, so I’m missing home a little bit, but that’s part of the territory when we can’t afford to fly back and forth all the time.

Talk about the difference between being a mechanic at the factory and privateer levels.
I never worked as a factory mechanic for a race team but was Trey’s practice bike mechanic, so I got a taste of what was going on there. The biggest difference is that I do everything. I service suspension when our suspension guy isn’t around, I build the race engines—I’m building one right now actually—I build practice bike engines; I do everything. It would be nice to have engines, frames, and suspension all lined up, and all you do is assemble everything; that allows you to pay more attention to detail. You can see that on factory bikes, but I have a priority list of what has to be done before I can start scrubbing and polishing and wire-tying everything and making it all trick. If I have the extra time I do, but we don’t have someone who’s there just to assemble engines, or someone who’s there just to assemble suspension. I’m responsible for that stuff.

How hard is it to get all that stuff done when you’re on the road between races?
Last summer that’s what we did and it was tough. Back east it’s 100 degrees out, and I’ve got forks apart on a Rubbermaid table under an easy up outside. But right now, with this new team that Jimmy has started, we’re doing pretty good. I’ve got a great workshop at home and we’ll be flying to all the East Coast races. We’ve got a really nice rig and we’re all set up so our suspension guy can do anything he needs at the races. We’re a lot better off than we were last summer, and there are a lot of guys who have it worse than we do.

How do you even pick up replacement parts when you’re on the road?
Last summer we got lucky. Georgia [Jimmy Albertson’s wife] works for NBC Sports, so she knew ahead of time exactly where her hotel would be every weekend. We’d just ship parts to that hotel and pick them up.

You went from Honda to KTM last year, and now you’re on Yamahas. Is it hard to go back and forth between brands?
The biggest thing is that you lose everything you’ve accumulated. If we were a factory team with a huge budget we’d just put in a big parts order and have everything we needed, but when you’re a privateer you slowly accumulate stuff. It applies to all the data you’ve accumulated too, but honestly all these bikes are really good now. The Honda was good because we did all kinds of testing and had a lot of data, but the KTM and Yamaha are so damn fast already. We’re not really doing much at all to the engines this year because the Yamaha is so damn fast stock! It’s really made my job easier. The Yamaha also comes stock with what I think is the coolest production fork out there—it’s still a spring fork—so we’re in good shape there too. We’re tied directly in with Yamaha now, and it keeps getting easier and easier. We’ve added a second rider, Mitchell Oldenburg, as well. We’re growing, and hopefully next year we won’t be getting interviewed for Privateer Profiles; someone else will be getting the exposure and hoping to ride for a team like ours.

Tell us about your new team situation with Yamaha.
Our title sponsor is ARMA Energy, and our team name is ARMA Energy Racing. Jimmy Sloan, the owner of Milestone MX and Perris Raceway, is partners with Jimmy on this deal, and we’re trying to blow it up and build into the future. ARMA is in new hands and it looks like it’s going up. The main thing this year is that we wanted to make sure our bikes were on point and Yamaha really stepped up and did a great job of getting us everything we need for that. They’ve done their research and there isn’t a whole lot that those bikes need. We’ve got good people behind us and we’re looking to grow in the future, with Jimmy as a rider for another few years, picking up a few more 250 guys, and Jimmy eventually transitioning into being a team owner and manager with ARMA Energy serving as the program’s backbone.

Your job isn’t easy. Is it something you think you’d still be doing if you didn’t have the opportunity to work with your brother?
I’ve asked myself that before. I really liked working for Trey, doing the practice bike gig in Oklahoma, but I had my weekends off. I really liked going to the races, but I didn’t have to go to all of them. So I guess the answer is no. I’m out in California right now, and I’m telling you there’s no way I could live out here full-time. Everyone always asks you what you’re going to do after being a mechanic. Being a full-time mechanic for the rest of your life, it’s for some people, but I don’t see myself doing it my whole life. This team is a good way for my brother and I to transition into other roles and possibly help the sport in a bigger way. I think we’ll be doing a lot of new things that people will notice in the next several years. Jimmy has made a name for himself in the last few years even though his results haven’t been there. But his autograph lines are still huge and he has a ton of Instagram followers, so obviously having a good attitude, doing things right, and taking time with people will take you places. And with our sponsors and what we’re doing this year, I think we’ll make a lot of people happy.