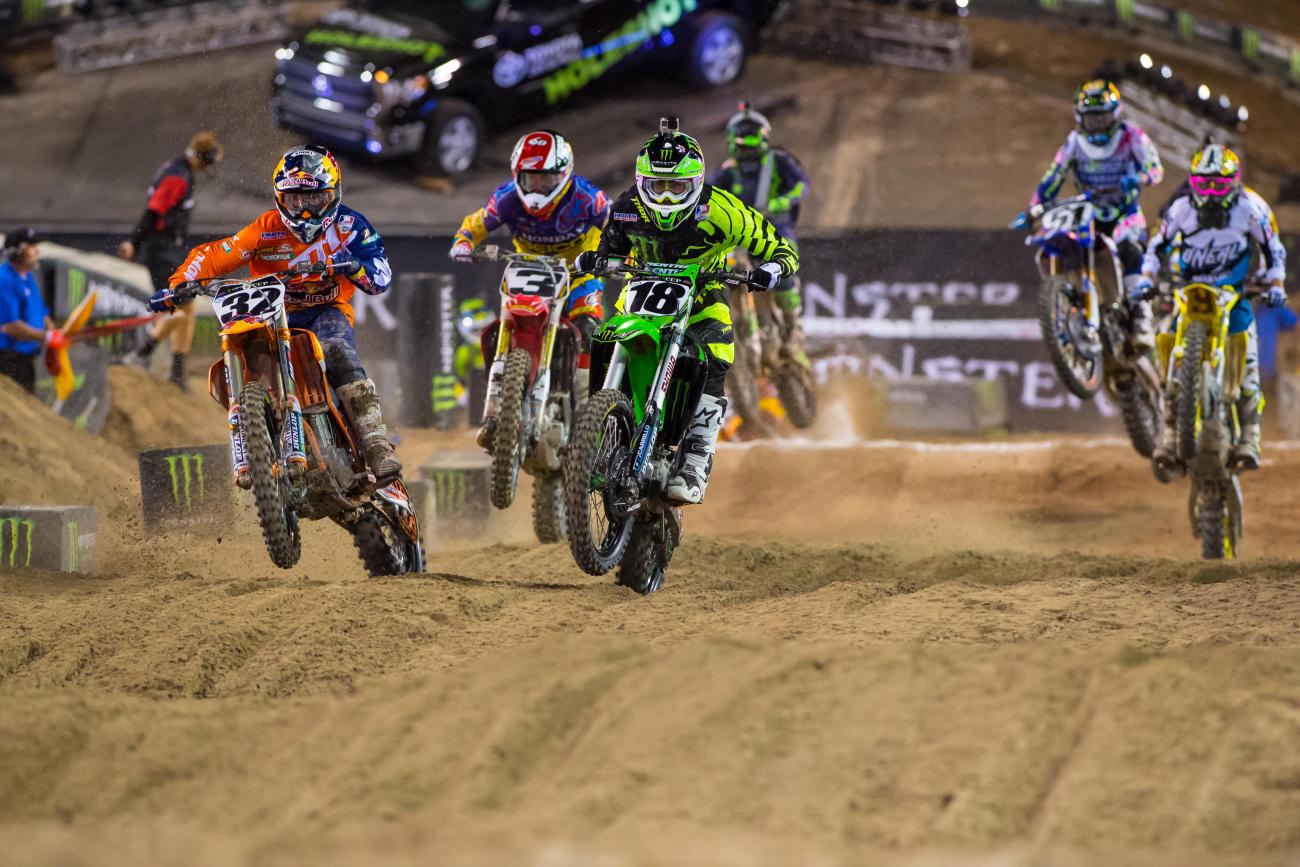 Every year the hype says it’s the most stacked, loaded, wide-open year in SX history. This year, though, we have proof. Ryan Villopoto, the four-time and defending Monster Energy AMA Supercross Champion has voluntarily chosen not to race with his #1 plate, a scenario we’ve never seen before in forty years of supercross. Three other times the season has started without the champion, but each previous time he was not simply not able to even ride a bike—Bob Hannah’s leg was shattered, Donnie Hansen was dealing with a career-ending head injury, and Ricky Carmichael had a torn ACL. Ryan Villopoto has said his knee surgery wouldn’t give him time to be ready for Anaheim, but we’ve seen videos of him on a bike since late October. Maybe that’s not perfect prep time for him, but one would think he could have made it to the line if winning in supercross was still his ultimate goal.

So now that the champion is able-bodied but not racing, it leaves a battle between the other best supercross riders in the world, which we’ve never seen before. There are plenty of genuine contenders, but each has a thorn in their side. These are known commodities with strengths and weaknesses, none who have completely proven themselves yet or recently. That makes it very hard to pre-select a champion (and also makes things very fun to watch).

The perfect example lies with the two contenders who have won this title before, Chad Reed and Ryan Dungey. But it’s been awhile for these two. Reed already holds the record for longest gap between two SX titles—four years between 2004 and 2008—but if Dungey wins another this year, he’ll break that record with a five-year break spanning 2010-2015. Reed would record an incredible seven years between titles if he won in 2015. We know the strengths and weaknesses of both. There was a time when Reed and Dungey were very similar, known for consistency and podiums. That also means they were criticized for “not hanging it out enough,” while competitors like Villopoto or James Stewart sped away.

Although RV and Stew won’t be there, the “not hanging it out enough” tag will still stick with Dungey. In supercross he’s become so taken for granted, so under the radar, and so devoid of flash that he can rack up great results while also being considered in a slump. Many people felt he had an off year last year, yet he actually finished second in the final standings, which is better than he did from 2011-2013. In what appeared to be a down year, he actually edged all of his 2015 competitors in points. That’s how Dungey does it—so coldly that you forget he was actually hot at times.

This is no longer Reed’s way. When he’s hot, he’s blazing. His last few wins have been ones for the ages, but unfortunately his trademark consistency is gone. He hasn’t made every supercross race since 2011. Even at his ever-advancing age, no one dares doubt that Reed will bring race-winning speed to the table. Everyone is worried that he won’t get through it all healthy, though, which seems so strange to say about the man with more podiums than anyone in the history of the sport.

This year Dungey has a new-gen bike and training assistance from Aldon Baker. The Baker/Dungey connection was one that seemed destined to happen five years ago. Will it make a difference now? Expect improvements on the bike front, as KTM is still relatively new to supercross success. The previous 450 was the first KTM big bike to ever contend in US stadiums—lessons from those three seasons should improve the breed here. Yet Dungey is Dungey; it would be foolish to expect a radical revamp at this point. As always, he will place the bar high, and it will not fall. It’s up to others to get over it the way Villopoto always did.

Three riders just entering their prime expect to do so. Of all the contenders, Las Vegas would place the best odds on Ken Roczen (he grabbed the largest share of our Online Poll vote last week, for example). Seeing how well he rode last year as a 450SX rookie, and also with the 450 Lucas Oil Pro Motocross Championship under his belt, makes Kenny a great bet. The team switch from Red Bull KTM to RCH/Soaring Eagle/Jimmy John’s Suzuki has scared no one. The only thing preventing Roczen from being a slam-dunk pick is the one thing you can’t change—time. It’s only his second full 450 SX season, and, oddly, riders often struggle more in year two than year one. Before Roczen in 2014, ten riders had won two or more races in their rookie season. Six of those ten did worse the next year. Expectations are for Ken to better his two-win total from 2014 and win the title—but we’ve expected big things before. (See Barcia, Justin). It’s doubtful Ken will struggle with the pressure, but sometimes things just don’t work out as expected, simply because racing is strange.

Look again at Barcia. His sophomore season was a bust by his standards, so he changed everything—bike, team, trainer. Now comes the mystery: Did the old bike and team really ruin him last year? Will he be more like 2013 than 2014? Much of Barcia’s game will hinge on starts. He’s arguably the most consistent holeshooter (new word!) of his generation, and those JGR Yamahas have always been rockets. If this combination gels as expected and he starts 60-70 percent of the races at the front, it will be a lethal combination for consistent results. Contrary to what you might think, Barcia’s strength has always been starts and solidity. He’s not the crasher his Wild Child rep would lead you to believe. Go search YouTube for the Barcia highlight crashes; you won’t find many good ones. His two 250SX East Region titles were powered by consistency. But if he doesn’t get the starts, he doesn’t get the finishes, and last year he didn’t. His whole season comes down to the first hundred feet each weekend.

It’s a credit to the fans and industry that Eli Tomac is being considered such a genuine title threat. Last year was basically a washout for him with injuries, and it allowed his old rival Roczen to pick up all of the buzz. But no one forgot about Eli. The facts are that Tomac was a total match—if not a shade better—than Roczen as recently as 2013, and none of his 2014 injuries were career-changers. Plus, Honda finally seems to have found the right path with the CRF450R. Erase Tomac’s 2014 supercross season from your search history because that’s meaningless data. The ET we all expected to see on the 450 is here now. Did you see him ride at the European races?

There’s a caveat for every one of these guys, though, and Tomac isn’t immune. As much as starts have been Barcia’s strength, they’ve been Tomac’s weakness, and that’s a bad deal in supercross. Starts are the hinges that Barcia and Tomac’s seasons will pivot on, much more so than others. If Eli gets off the gate well now—and he might on a 450—he’s as strong a pick as anyone.

Just north of this group, sandwiched between them and the Reed/Dungey veteran group, are the Tweeners. Davi Millsaps and Trey Canard have been following similar arcs for awhile now, including a clash for twenty laps at Anaheim 1 2013 (which feels like it was five years ago, right?). They were at it again at this year’s Monster Energy Cup, battling each other for the win and re-proving that they’re threats this season. As checkered as the career history is for these two, the facts have always been that if everything is clicking, they have the tools to win, and right now things are indeed clicking. It’s sort of a strange scenario, but in a season where every contender has strengths and weaknesses, Millsaps and Canard, the two riders with the most up and down history appear to have the most level game across the board. It’s an idea that speaks volumes about this entire group—we can see reasons why any of them could win it, but we can also see reasons why they won’t. When you remove the defending champion, absolute certainty goes away with him.

For once, “anyone can win” appears to be an absolute fact.