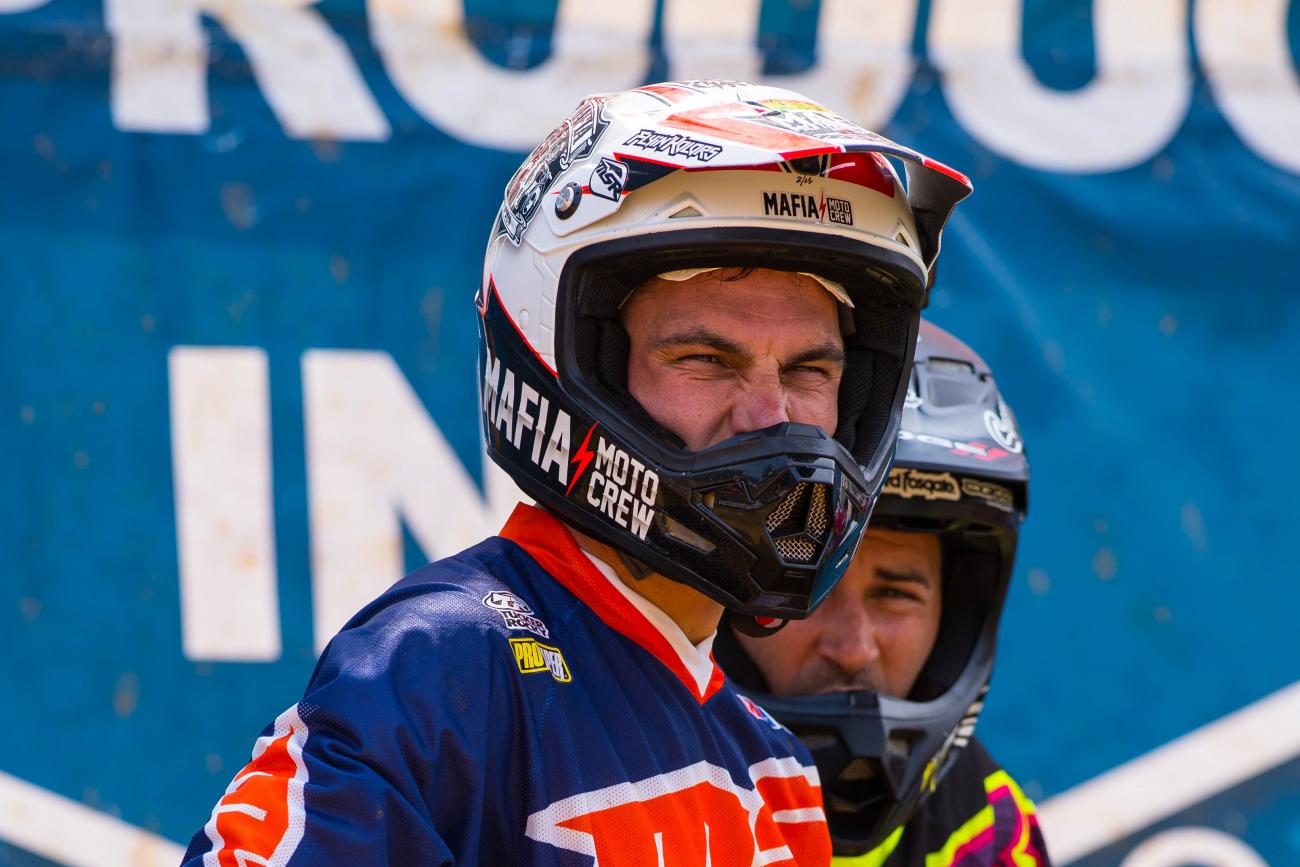 Here’s the question you all want to ask about Nick Wey: Why is he still racing? Without huge factory support or outside money, he’s clearly not getting rich running a racing team. And having been pro full-time since 1998, he’s certainly taken on his share of bumps and bruises. Yet he keeps driving forward, prepping his Mafia Moto Crew/Pasion MX team for another season of Monster Energy AMA Supercross. The answer as to why is actually quite simple. Read on.

Racer X: You’ve been hustling the last few months, because you’re not just a rider; you’re a team owner. Talk about how busy the off-season has been for you getting prepared on both fronts.
Nick Wey: For me, in particular, in 2012 I broke my back. I made the decision to do my own deal, and I felt that every part of the team—the equipment, my truck, the results—they would represent me. And honestly, it’s kind of slow going with the results on the track, but last year I had a lot of exposure on TV and a lot of loyal sponsors who stuck with me, like MSR. This year MSR is going in a different direction with their marketing—all off-road—so they moved on. I wouldn’t say they were make-or-break sponsor for me, but I definitely put in a lot of time with them, and with them being gone for 2015, things got a little tougher. I had to find more team funding. This year I’ve been on the sponsor hunt and I’ve got a few that worked out, so things are looking good.

Was there ever a point where you worried that it wasn’t going to work out?
No. To me, you either race or you don’t. You don’t want to race and then say, “I would have but this team didn’t give me a bike,” or whatever. Just crying a river. You race a dirt bike or you don’t. Hey, Jason Weigandt isn’t waiting around for someone to give him a lap-top, right? And honestly, that’s why I’ve had a tough go of it sometimes as a team owner, trying to manage time and focus on the right things. You want to be focused on how the presentation looks, but you also need to be focused on the results. It all reflects on you, and ultimately I’ve realized the only thing I need to focus on is my results on the track. We’ve got a good look and sponsors that are sticking behind us. The reason why I’m racing is because I know I can do well. I’ve been training and riding a bunch. I’ll make sure the sponsors get what they want, but the main thing is to focus on my riding.

Sounds like the main thing is, you need to be confident knowing the sponsor deals are going to fall into place and not get distracted by that.
That or you just need to be willing to pay for it if it doesn’t work out.

Well then, why are you that committed to it? We know there are guys that aren’t willing to make that commitment. Why do you want to do this?
I guess that’s the ultimate question right there, isn’t it?

Yeah, it’s not like you have five-year contracts that say you must be on the track. You keep racing because you just want to keep racing.
Yeah, and that’s the answer right there. It’s because I want to keep racing. I have some goals yet that I feel are unattained, and I feel like it’s realistic for me to obtain them. It’s fun for me to race against these young kids, the Barcias and Tomacs of the world. I really feel like I can definitely be top-ten this year, or top-five on good days, depending on starts. I know there’s going to be a lot of good guys out there. It ultimately comes down to the fact that I’m motivated to race and get my team going to where, [when] I’m not racing, maybe I can have some younger kids on board.

Ah, perfect transition. You’re starting to build further down the line. This is taking on a life of its own, outside of you being the rider.
I think the ultimate goal was to join with my sponsors and make a long-term thing where we could bring an amateur kid into supercross and accelerate their learning curve. Then they could transition into a team with more resources, maybe for the outdoors. I don’t have the motivation to do all the races—the full season of motocross and supercross—just being a team manager or owner, and not a rider, the way it is right now. But if we had some young kids come up and we got good support from a manufacturer, it’s definitely something I would want to do in the future.

You don’t need to give away all of your secrets, but give me an idea of how you get these sponsors. Is it knocking on doors? Chatting at the races?
Honestly, for me it’s tough because, and I’m not trying to toot my own horn, but I’ve always been brought up to be respectful and treat everyone the same. So the biggest part for me is trying to weed out the people that just want to hang out against the people that actually, genuinely want to talk business. I do a lot of talking to people who are maybe just fans or just want to know how the business of motocross works. There’s a lot of dead ends. Luckily we’ve found some great partners, and moving forward I think things will get bigger and better through the years.

Yeah, you’ve seen a lot. I’m sure you’ve seen guys that either have a lot of money, or claim to have a lot of money, and they want to start a team. It almost never works out.
The biggest red flag when you’re looking for a partner in this sport is, if you hear this rich guy saying “Money’s not an issue.” That’s a red flag. Because the people I’ve come across in real life, they might be successful, but if they’re telling you how rich they are, they’re probably not someone you want to hang out with.

To anyone who says money isn’t an issue, it always becomes an issue!
Exactly. Also, what a lot of people don’t understand is this: I had a lot of successful years working with Mark Kvamme with the MDK group. He’s an enthusiast. I feel like for someone who is an enthusiast like him, for them to come in and spend their own money, regardless of the amount, they don’t want to put up with drama. They don’t want to have some kid’s dad saying, “This bike’s not good. This sucks!” They don’t want to spend money to have drama in their life. They’re spending their money at the races to have a good time and be appreciated. They don’t want to add to their stress—they’re obviously very busy and stressed running the business that made them this money in the first place. What a lot of people don’t understand is there are a lot of people in this sport that feel entitled. They feel like it’s never their fault. They blame the bikes or the team every time. So I think that drives off the enthusiasts that put their money into the sport.

So if you don’t act like an entitled person and you handle your business like you, it’s possible to make it work. We hear a lot of bad stories, but you’re making it happen.
Yeah, but again you have to be willing to spend your own money. You’re getting undercut and false promises all the time. And there are a lot of good riders out there right now, but not a lot of good businessmen. Chad Reed is doing a great job. He’s got a very professional crew, and his model is good—he’s willing to pay for it, I believe, and he’s not willing to give up prime sponsorship position for nothing. You’ll see some teams, a rich guy will come in, and they’ll put his logo huge on their trucks. They just want to feel like they’re sponsored. They’re like, “Yeah! I got five bucks! Yeah it cost me thirty-five bucks to get here, but look I’ve got their logo all over my truck.” I understand the motocross industry isn’t what it was at one point. But I’ve also been in position to know what these companies can do. If they don’t want to work with you at a level that makes sense, don’t put the logo on your truck. There’s a lot of enthusiasts out there who will make promises they can’t come through on. I understand it’s hard for everybody.

Let’s go back to you as a racer. When you get over 30, this time of year, when you’re preparing, do you feel much differently than you did five years ago?
Honestly I don’t feel that much different than I did five years ago. Mentally, I just think it’s the commitment. It goes back to if you want it or not, and it’s hard when you weigh your upside. Am I going to get a factory Honda contract next year? Probably not. Is there a million dollars waiting for me? Probably not. Your motivation has to come from yourself, personally. My goal is to get my team as much exposure as I can, get my brand, Mafia Moto Crew, as much exposure as I can, and personally, since I’ve come back from injury in 2012, I haven’t had the results that I think I can put in. So I have a lot to prove to myself. Hopefully things come together this year. I don’t want to be a guy who talks all about it. I know what I can do; I just need to do it.

Where do you do your riding?
Kawasaki has been super-helpful. I’ve ridden their bike a lot as a pro and also as an amateur. I’m friends with a lot of the higher-ups there, so they let me ride their track. This year they’re going to elevate the level or support I get from them. I’m excited about that.

And what’s the end goal of the Mafia Moto Crew?
We’re working on some new products. We don’t want to just be t-shirts aimed at the motocross crowd, because obviously that’s a limited upside. But when you’re starting a team, you need something to sell and justify your costs. So we’ve built the team around that, and we think the brand has good recognition. We have some new products that will be coming out during this supercross season, and we’re looking forward to that. We have a new sponsor on board this year, Pasion MX, the co-partner with Mafia Moto Crew for the team. I appreciate what MSR has done for me over the years, but they’re moving in a new direction, so we have a new gear company coming on as well. So, a lot of changes, but I’m going to try not to get too hung up on the details this time and focus on the riding. If I do that, we’ll have a successful year.