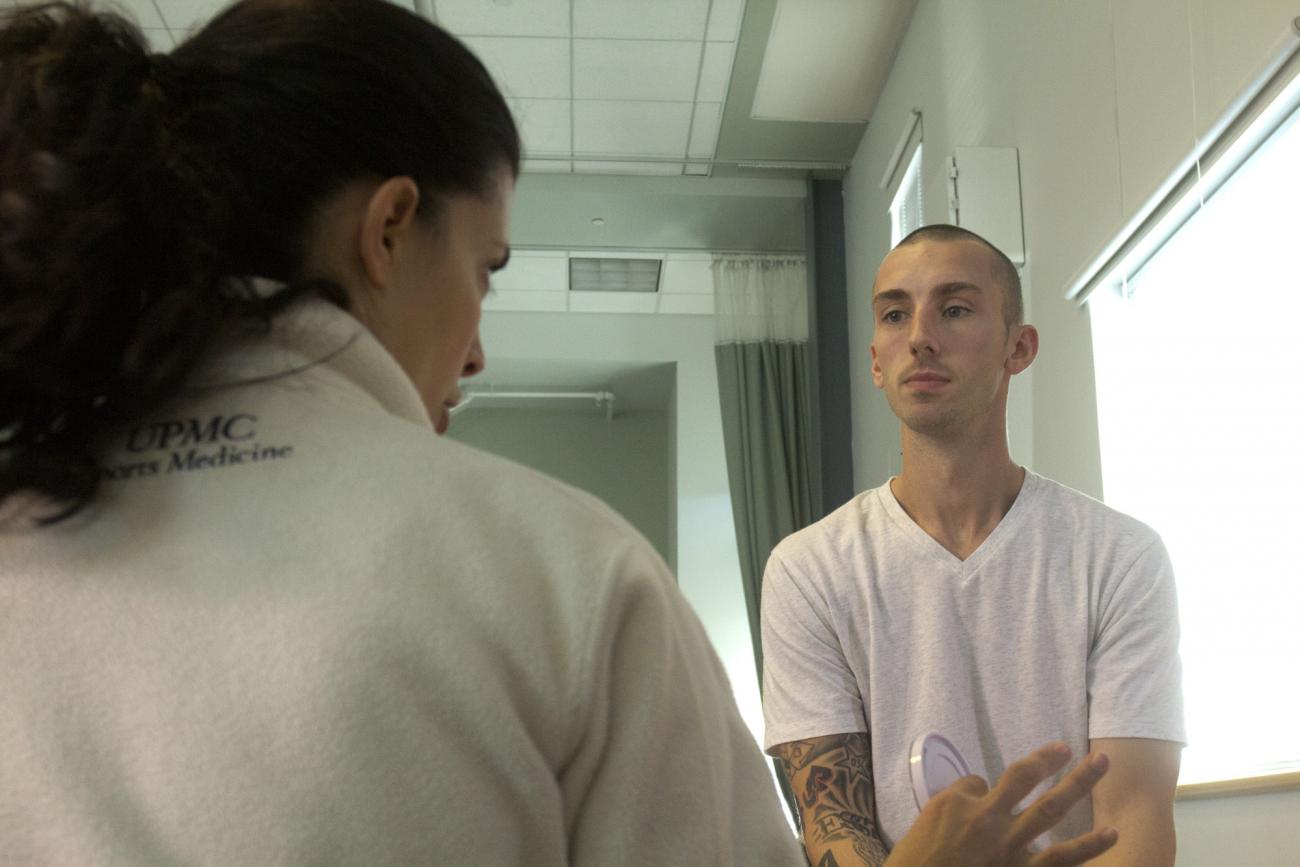 At 27 years old, Pennsylvania privateer Mike McDade is preparing to enter what very well may be the last season of his professional racing career. The former AMSOIL Arenacross Lites East Champion is on the tail end of wrapping up a deal to return to the series in 2015 for the full fifteen rounds, but it hasn’t exactly been a walk in the park. A privateer’s silly season is much more taxing than that of a top-tier rider. Trying to make financial sense of just getting to the races takes precedence over the rest of the program. For McDade, juggling a nine-to-five job with his 3-year-old son’s chemotherapy has only increased the complexity of maintaining a racing career in such a demanding sport.

Despite McDade’s schedule, he agreed to set aside a day to meet us at University of Pittsburgh Medical Center Sports Performance Complex. As the title sponsor of this year’s High Point National, UPMC has recently placed more focus on the alignment of our inherently dangerous sport and their advancements in the field of concussion testing and treatment. Many of you are probably already familiar with the required ImPACT baseline testing that was implemented a few years back in both Monster Energy Supercross as well as Lucas Oil Pro Motocross. It’s a tool that was pioneered by UPMC to aid in the diagnosis and treatment of concussions—an injury that oftentimes lacked professional medical evaluation in comparison to other injuries.

Once we arrived at the Sports Performance Complex in the Southside of Pittsburgh, UPMC’s Doctor Brian Hagen and Patrick Huber greeted us and provided us with an overview of their concussion program. They work closely with the Pittsburgh Steelers and are in the midst of combatting the controversial concussion crisis in the NFL. With football and motocross sharing the trait of being high-impact sports, they stressed the importance of the steps our sport has taken to avoid being in a similar situation.

After the educational session, they told McDade that they’d take him through an accelerated version of the program from testing to treatment. It started with the ImPACT baseline test, which is all done on a computer and focuses on verbal and visual memory, the brain’s processing speed, and reaction time. Once McDade took the ImPACT test, we headed down to see Doctor Anne Mucha for a vestibular assessment, which in layman’s terms is an assessment of the balance portion of the inner ear and helps isolate dizziness symptoms. She conducted several simple balance and eye tests on McDade, but the most interesting portion of the assessment was when she strapped a pair of goggles on him that tracked any unusual motion of his eyes. After cracking a couple jokes about them being the next prototype motocross goggles, we went up to the second floor to review McDade’s test results with Doctor Michael Collins, UPMC’s executive director. Based on the results, Doctor Collins asked McDade if he was experiencing a handful of various symptons, and the outcome was eerie. Without any prior conversation that day regarding his medical history, McDade confirmed that he does in fact experience most of the symptoms mentioned on a daily basis. McDade also revealed that he had been in a coma following a bad crash a few years back and that he had never been quite the same after.

“He nailed every feeling I ever had in the last two years and how I deal with everyday life. He nailed it on the head,” said McDade of Doctor Collins inquiries. “For him to read test results from ImPACT and eye tests and be able to pull that out…he’s a smart guy. The way he made it sound is that I have a way better life looking ahead of me. My problem is the strain on my eyes and I’m always blurry and foggy. I work out and ride and do everything I’m supposed to do. I don’t eat that terrible. I don’t do anything wrong. Just to hear that I could be able to see a lot more clearly, feel a lot better, drop my anxiety, and drop my fog and the dizziness—all that stuff—I’m looking forward to that. I came here with you guys to visit and see the place and I’m leaving here with maybe a better life.”

If McDade decides to follow up at UPMC further down the road, Doctor Collins would have him participate in a physical rehabilitation program to work at clearing up his symptoms. This may only be a minor detail in the long list of adversity McDade has had to face through his lifetime, but things are currently looking up for the Pennsylvania privateer. Aside from improvements to his own health, his son’s Acute Lymphoblastic Leukemia is expected to go into maintenance just before the birth of his daughter. As for the upcoming Amsoil Arenacross series, McDade landed a ride with a Thermotec- and Yamaha-backed team put together by Junior Jackson. It will be the first time in his career that he’ll be flying to the races and won’t have the burden of worrying about all of the necessary expenses to go racing. As for the sport of motocross, look for more advancements in safety and protocol regarding concussions in the near future.