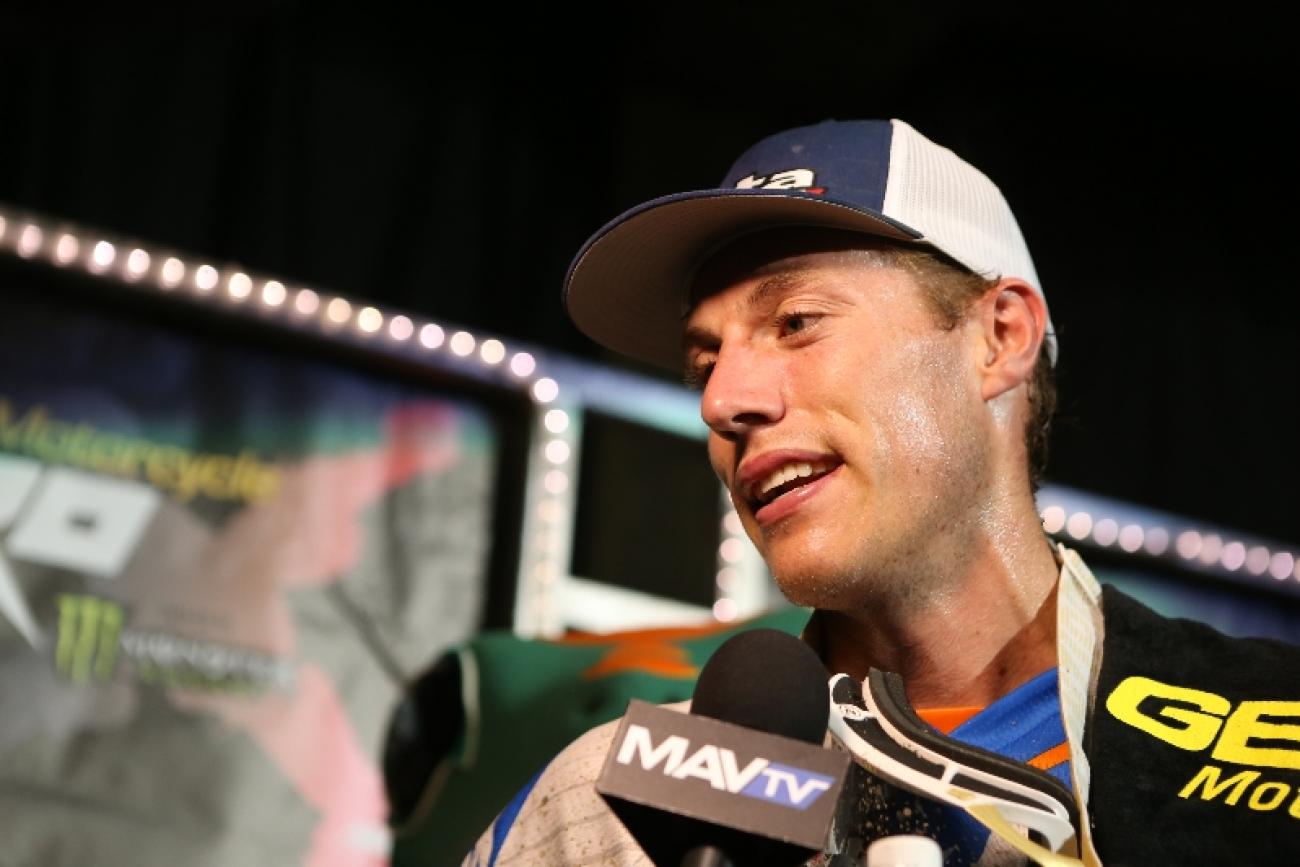 When GEICO EnduroCross first began in 2005, no one knew who would win. Off-roaders and trials types were pumped on racing in front of a big crowd for once, but in the end it was motocrossers, powered by sheer aggression, who handled it best. Ryan Hughes won one, John Dowd another. Finally, David Knight broke through to win one for the true off-road set, and the rest of the woodsmen were upping their game. They started building EnduroCross test tracks, and changing their training and bikes to match their new style. The likes of Hughes and Dowd had already been through the racing ringer. EnduroCross was a hobby for them. For a few lesser-known riders, it could become a profession.

It’s right about then that Taddy Blazusiak started stealing everyone’s money. At the point when the off-roaders were finally toppling the motocrossers, Taddy came in and toppled everyone. He dominated. Dominated. An injury prevented him from winning the first-ever season-long EnduroCross Championship (congrats to Ricky Dietrich on that), but soon the Polish Rocket was healthy and unstoppable. Not only has Taddy won five straight championships, but he also threw a perfect season into that mix. Taddy has won more EnduroCross races than the rest of the field combined.

Last year, in a turnabout, a motocrosser almost got to him. The venerable Mike Brown kept honing his craft, treating this, as expected, as a life-and-death situation. Brown might be 40-plus, but he still attacks a challenge like a 16-year-old, and he won the first two races last season while Blazusiak was recovering from some injuries. After that, it was tooth and nail between the two, and they came into the season finale tied on points. They were also KTM teammates, but of course Mike Brown, in typical Mike Brown fashion, brushed any of that aside and made it clear he was out for himself, and out for blood. He’s one motivated dude.

In a nail-biter, Taddy edged out Brown at the finale, just barely surviving with title number five. Both Blazusiak and Brown escaped something else, though. Two young riders were advancing significantly, but inconsistency had kept them out of the 2013 title. When 2014 began, they were ready.

Contestant number one is Colton Haaker. He’s a former trials rider with the personality of Travis Pastrana. Don’t believe that? Well, on most EnduroCross nights, he’s the fastest rider there, usually winning the Hot Lap qualifying award. Then in the main event, he’ll be good for nearly every lap but one, with one huge error preventing him from turning that speed into a win. He’s also prone to distractions on the bike. When Haaker started hitting the motocross track to improve his speed, he got so into it that he decided to start hitting some Lucas Oil Pro Motocross Nationals, and he even qualified for Hangtown. Mighty impressive for a trials guy, but that’s not really focusing on EnduroCross, is it?

Last year Haaker got straightened out by joining the Johnny Campbell Racing/Rockstar Honda team. It took most of 2013 to iron out a big Honda 450 for EnduroCross, but once he got it dialed, he was a contender again. Campbell kept preaching that consistent training during the week would finally lead to consistent weekends, and Haaker really started putting things together this year.

The biggest threat, though, is Cody Webb. He started last year with a foot injury but started winning consistently while Brown and Taddy were battling for points. His confidence was growing. Webb is also a trials rider, once considered the protégé of ten-time AMA Trials Champion Geoff Aaron. In the early days of EnduroCross, Aaron was Blazusiak’s toughest competitor. Webb jumped into this new form of racing as well, backed by Beta. That’s a small Italian brand well known in trials circles, and they also produce a much lesser known line of dirt bikes. Webb moved on from trials and focused on EnduroCross, riding under the factory Beta/Stillwell banner. He also attends college. As a trials rider with a factory Beta deal, he knew the chances of ever making a living by riding were slim.

But he’s about to do just that.

When this season began, Haaker and Webb were ready to take the big step, and they’ve basically put Taddy on the ropes all year long. The three of them pound on each other weekly to the point where at round six they each had two wins and were virtually tied in points. In the latter stages, though, Webb’s confidence has swelled. Where Blazusiak once had beaten everyone before the gate even dropped, a kind of Jeremy McGrath-like mind control over the field, these kids now know they can beat him if they just stay on their game. Intimidation is gone and confidence is up. Webb doesn’t always get the start, but he quickly blazes past dudes, even Taddy, exuding the confidence that he belongs up front. These kids are hungry. This is their chance to make it.

Haaker and Blazusiak each had small stumbles lately that knocked them off the podium. That’s coincided with Brown getting back on his game after an early injury and KTM’s Taylor Robert finding his stride. These two spoilers have stolen some points away, which has helped Webb open it up. The season finale comes Saturday night in Ontario, California’s Citizen’s Business Bank Arena. Webb has a 13-point lead on Haaker and a 15-point lead on Blasuziak. If Haaker has a perfect night and collects the bonus points from winning his heat race and setting the fast time during the hot laps, Webb can still clinch the title with a seventh place finish. For Blazusiak to take a sixth EnduroCross Championship on Saturday, he would need to score maximum points and have Webb finish ninth or worse.

Cody Webb hasn’t missed the podium all season. He needs just a seventh-place finish to wrap up this title and finally slay the giant that is Taddy Blazusiak. Taddy’s a proud champion and will fight to the end, just like he did last year. For now, though, an unlikely candidate appears to have built himself into a champion.