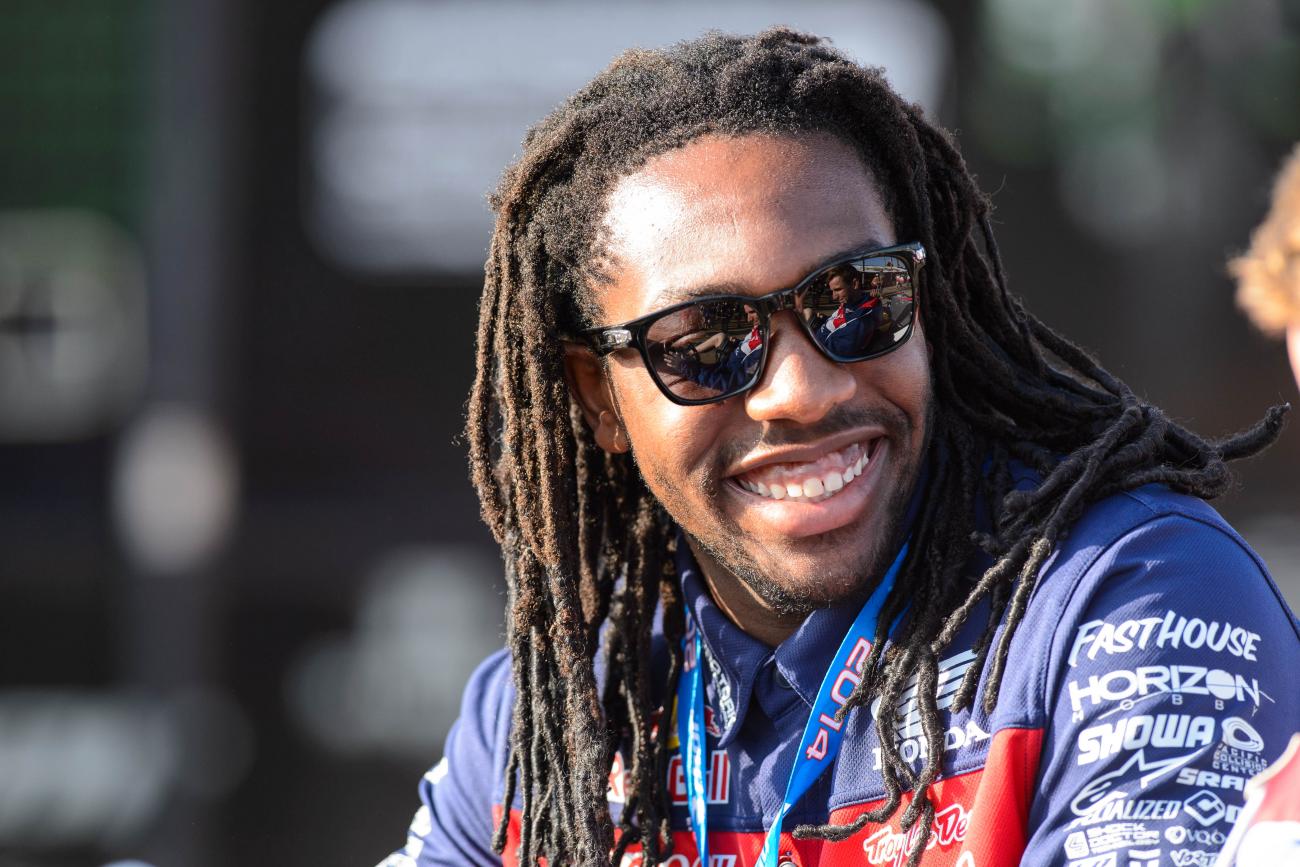 Malcolm Stewart’s year-and-a-half run with the Lucas Oil/Troy Lee Designs Honda team came to an end after a bought with severe dehydration ended his summer early. Left without a ride, he went to Red Bull Straight Rhythm and the Monster Energy Cup on his own and did well—but still didn’t get any offers. Just before finally settling in as a privateer, the GEICO Honda team contacted him about a 250 ride for supercross in 2015. He was more than happy to take it. We called Malcolm today to get an update.

Dude, so you have to work two jobs—riding and then farming!
Pretty much! That’s why I got the cowboy boots on today.

Hey, so congrats on the new ride. Was this in the works, or did it come out of nowhere?
This came out of nowhere. I was actually out jet-skiing, and I get a text from Jeff Majkrzak from the GEICO team asking if I’m still a free agent. I said, “Yes I am. What do you have in mind?” He said they were thinking about a 250 deal for West Coast. This only started happening a few weeks ago.

So after Red Bull Straight Rhythm and Monster Cup, you hadn’t heard anything?
Nothing. I decided I wasn’t going to just sit here and wait for my phone to ring. The plan was, and I had no choice, I had to go privateer. I was going to have to figure out my whole program. I’m glad they contacted me because racing as a privateer professionally at that level, it’s quite expensive. Especially to do it right, to be top-five or top-ten. You’re looking at like $150,000 in flights, hotels, bikes, and parts, all that. So that’s a lot of money.

You know what I think hurts you in this situation? I bet some people assume, “Whatever, the Stewarts make tons of money; they can bank roll this no problem. And James can give him parts.” Maybe they don’t feel bad for you like other privateers. Is that even true, though?
No, all this comes out of my pocket. My parents help me out wherever they can, and my brother does as much as he can, but if he doesn’t race or whatever, I’ve got to think about how I can get my bike to the races. You can’t just depend on him or any other rider; you need to look out for yourself. It’s tough.

I think that’s part of the problem. Other guys, we know they don’t have much money, and it’s going to be hard on them. With you, people may think you can do your own program and have the money to make it big. But you were really just going to be like any other privateer out there?
Yeah, I was. Especially when some riders at least get a deal with a privateer team. But when that’s not even offered, now you’re starting your own deal from scratch. To do it seventeen weekends, it’s hard. So, like I said, I’m super happy. I’m so glad they contacted me. I didn’t even hesitate. I was like, “Yes! Yes! Yes!”

We know you’re a bigger guy. Do you care that you’re on a 250 again?
I do not care. The 450 is cool, and I think I ride it better. But I had a great year this year on the 250F with TLD, so I think I’ve proven I have speed on a 250F, too. And seeing GEICO, the success they’ve had, I think once I start riding that bike it will boost my confidence up. Plus, now it’s all done. Instead, it would have been me stepping out a few weeks before Anaheim 1 and trying to get bike parts lined up.

So have you ridden a GEICO Honda yet?
I have not yet. I’m going to Paris Wednesday for the race over there, and then when I get back I’ll be able to ride it.

I was going to ask how you think this bike compares with the TLD Honda from last year, but do you even know?
I have no idea. The TLD bike was great, never had any problems. I’ve ridden a Honda before, so I don’t think this will be a drastic change.

When you first turned pro, you showed some crazy speed, but consistency was a problem. I think that’s what people remember. But actually, besides having this health problem outdoors this summer, you’ve been pretty consistent the last few years.
Yeah, I do the best I can. I’ve had a few bad races or whatever, but I love this sport. If I crash or have a problem, I’ll still try to get up and do my best.

You say you love the sport. Back in the day, all we heard was “Malcolm doesn’t really care about racing; he just wants to be a fisherman.” Was that correct? Did something change for you?
That was totally true! I’ve changed a lot since I’ve turned 18. To be honest, when I as a kid, I didn’t care about dirt bikes. I’d look at a dirt bike and it might as well have been a moped. I didn’t want to do it. It all changed when I turned pro. I was 18 and I made my debut at Houston. I didn’t have the best race, but I showed speed, and I was like, “Man, I kind of like this!” But I had no plans. As a kid, being a professional dirt bike racer was the last thing on my mind.

Can you still handle some fishing?
Oh yeah, I can still do it! Now it’s just racing first and fishing second.

Hey, so what happened over the summer? Are you all fixed up?
Yeah, I’m good now. They were putting IVs in me twice a week, but with how hot it was down here in Florida, I still wasn’t recovering. The only way I could recover was I had to walk away. I couldn’t ride. I couldn’t train. It was frustrating. One day I’d feel good; the next day I’d feel bad again. It just got to the point where it was pretty much impossible to do two thirty-minute motos at race pace. So I had to just wash my hands of it and focus on coming back for this Red Bull Straight Rhythm and Monster Cup.

So, did you get sick or something? Or is this something that can happen to any rider at any time?
It could happen to any racer. I’ve never heard of it. I’ve heard of people passing out due to dehydration, but I’ve never heard of someone going into kidney failure due to it. It was new to me. I don’t like having IVs. That’s it. But sometimes, training down here in Florida, you need to do it. I don’t like needles. I was drinking a gallon and a half of water a day, and it wasn’t enough for me to recover. Once you get dehydrated, you can’t do what you’re doing and recover unless you have an IV. You can’t catch back up, even drinking a gallon and a half of water. I think that’s what happened to me. I think if I had a really rough day, and I had really drained myself, instead of maybe taking a day off and going and getting an IV, I wouldn’t. I’d just keep training more, and that was only making it worse. I’m glad I found out what the problem was, instead of just thinking the problem was just all me. I felt like I was out of shape, and I was just training harder and harder. Even when I was laying in the hospital, it was a relief to have an answer.

So, this deal only goes through the end of supercross in May. Nothing set for outdoors yet, but you want to be back out there?
Oh yeah. That’s always something in the back of my mind, but I feel like, if I go out there and perform in supercross, I’ll pick up a ride, hopefully. Right now, I’m just so glad to have nine supercrosses figured out. I know a lot of people were bummed out saying I should have ridden a 450, but I didn’t care. I would have ridden an 80! You can’t be picky when you don’t have anything.