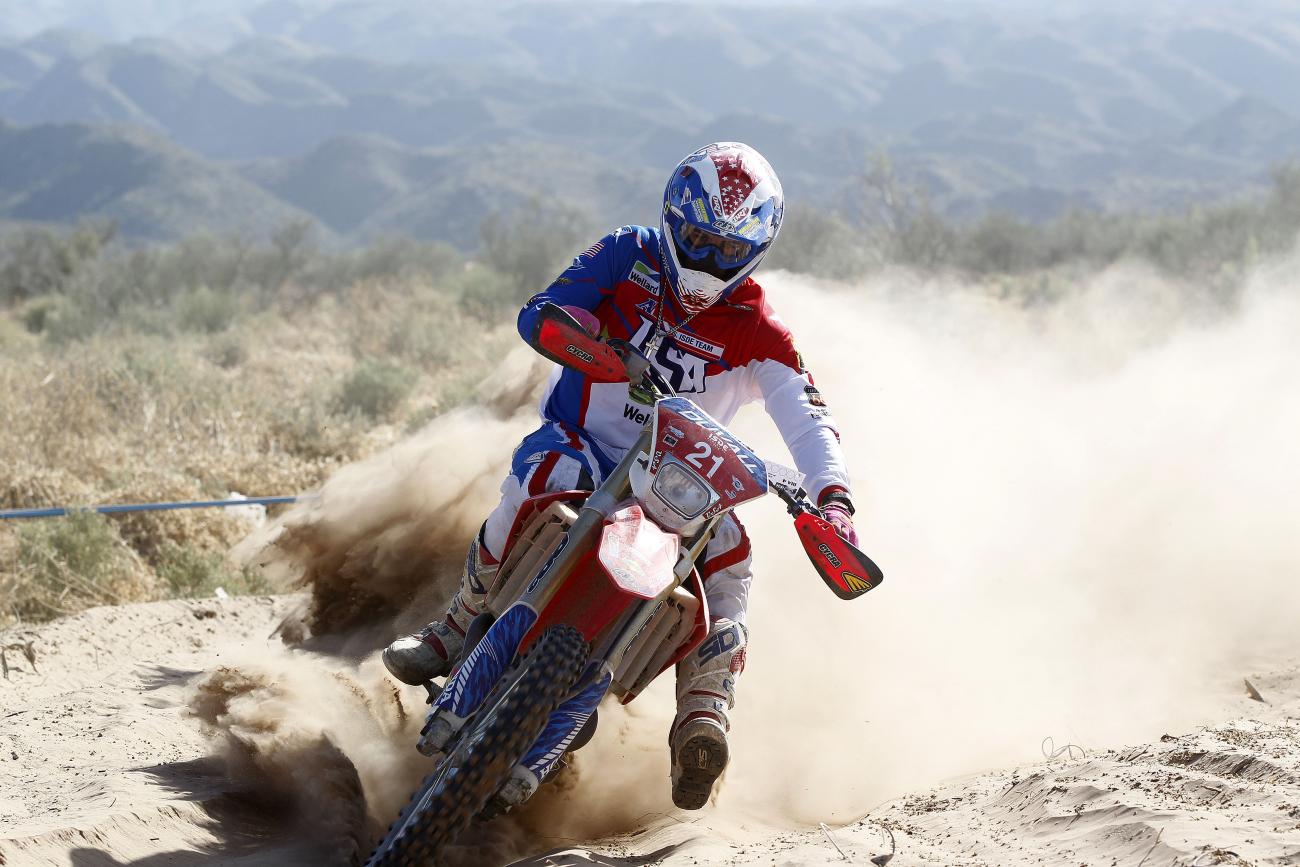 America’s ISDE effort is getting better. Team USA has never won the event in the top-level World Trophy division, and usually only a few individual rides are all the U.S. gets to brag about. Over the last decade, the overall team effort has gotten stronger. This was spearheaded first by the late Kurt Caselli, who proved Americans could actually go as fast as the Europeans and match them in Special Tests, and then set his mind on pumping up the rest of his countrymen. Caselli was a great man and a great leader, and America’s top off-road riders started to see the ISDE as something they could do well, as opposed to something they could just participate in. The next step came when FMF/KTM factory off-road Team Manager Antti Kallonen stepped up to become ISDE team manager. Because Kallonen is well plugged into the scene, he was able to put together a more united effort. Since then, the team has taken another step, punctuated by last year’s second-place overall finish. The Americans have never won the event and had only finished second one other time.

Backed by that success, this year the team had a shot at winning. France has been absolutely dominant at the event lately, but injuries cost them four big names—Antoine Meo (last year’s overall winner), Johnny Aubert, Jeremy Joly, and Mathias Bellino. They were ripe for the picking. Italy is usually strong, but they chose not to make the long trek to Argentina this year. Finland was a powerhouse for ages, but they’ve faded a bit lately. While the ISDE still presents considerable challenges for the Americans—namely, it’s a completely different format than anything we have over here—this was at least a better chance than usual.

Then it turned bad almost immediately. On the very first day, Zach Osborne’s bike died. As per ISDE rules, if your bike is dead and you can’t fix it yourself (which means, any kind of major problem), you’re out. Osborne, then, was out of the race.

“Today was tough. I started off well with a good time in the first test, and then in the second test we had a little bit of a mechanical malfunction,” said Osborne. “I then got it fixed, but the same kind of thing happened again, so it’s over.”

“We are not totally sure of what the second issue is, but the first time it was a malfunction of the stator. It’s out of my control and I am really gutted, especially after my first test, as I felt good and was ready to go, so what can I say?”

“It’s over for me, so I suppose I will now be a professional cheer person for the rest of the week.  I plan to stick around to cheer the boys on and to help the team as much as possible.”

“It’s tough as I don’t think it has totally sunk in yet. I shed a few tears when I was sat there at first, and then I was like, yeah, when we got it going, and now I am totally gutted and can’t even believe it.”

“It was awesome out there,” ended Osborne. “The three tests I got to ride were really good, and I am super gutted as I wanted to ride this week and do good for my team, but now its all over.”

Zacho, by the way, was seventh fastest overall in the first test of the day (when his bike was running right). That’s a huge loss for the team, and now they would not be able to drop any other scores throughout the event. Every test would have to count, giving a razor-thin margin.

Luckily, the boys ran fast and solid, but there were other problems. Charlie Mullins, still recovering from a pair of broken wrists earlier this year, took a big digger. He was battered and bruised but dusted himself off and got back going. Taylor Robert was leading the American charge until the extremely dusty conditions jacked up his KTM, and he lost nine minutes in one day. Kailub Russell has now moved into the top American position, and the team keeps fighting. Despite the trouble, they’re still in second place.

Australia was considered one of the top teams coming in, and they’ve had even worse luck. Daniel Milner smashed his hand, knocking him out of the event, and then the team lost Jarod Bewley and Joshua Green to mechanical troubles, eliminating them from contention. Compared to this, Team USA’s race has been rosy.

Then there’s Team France, still dominating despite losing more than half of their riders from last year. On days two and three, the Frenchmen really took over, with Pierre Renet leading them. The third day was mostly sand and dust, and it was hard on bikes. The Frenchman played it consistent and ended up with a massive sixteen-minute lead.

The Americans won’t give up, though. On Day four, they pushed the envelope and logged the fastest team result of the day. While most just tried to keep their bikes chugging through the dust, Team USA threw caution to the wind and chopped France’s lead down by about three minutes. And Russell, Brown, and DuVall currently sit inside the top ten outright. Winning the event would still be a long shot, though. If Osborne were racing, things could be different, but reliability over six days is the very calling card of this event.

Now Day 5 is over, and a scan of the results shows the French team with a ten-minute lead, with Team USA still second. With just a motocross test tomorrow, the leaderboard won’t change immensely, so the Americans are probably locked into second again.

A year ago, they were overjoyed with that result. This time, probably not so much.

On the bright side, the young Americans of the Junior Team are leading in that division. The team features the Baylor brothers (Stew and Grant), Trevor Bollinger, and Justin Jones, who is actually the son of America’s first 250 National Motocross Champion, Gary Jones.

America has won the Junior Trophy a few times, and they look set to do it again. The big award for the World Trophy, though, is getting closer but still appears out of reach.