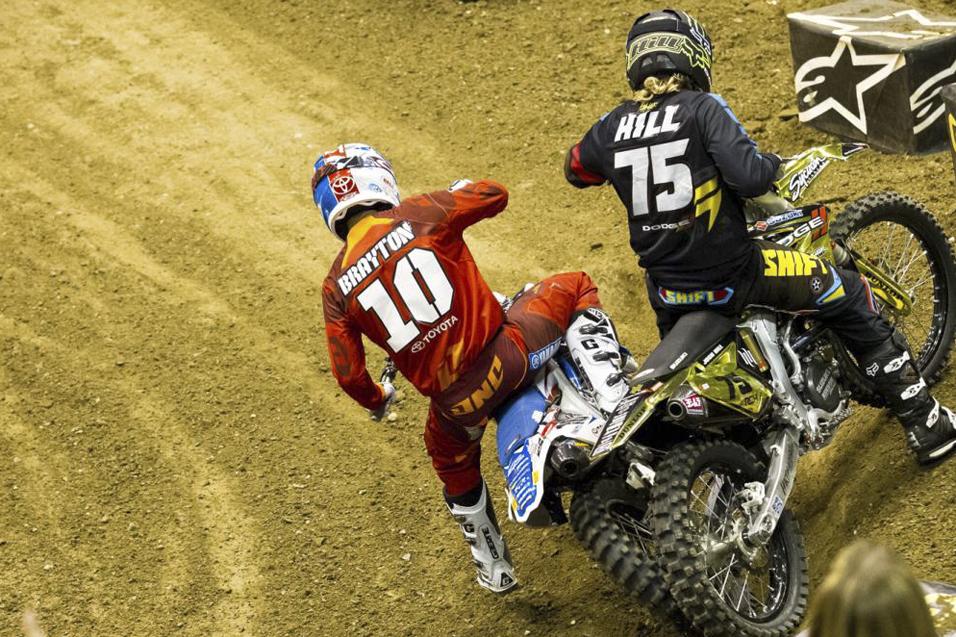 August 5, 2013 3:30pm
by: Jason Weigandt
Moto X Racing returned to X Games after a two-year absence, and Justin Brayton made the most of it by winning gold on his JGR Toyota Yamaha. He’d taken silver in two previous attempts when the race was held at the L.A. Colseium, but the 2013 event, built more like an Arenacross inside the Staples Center in Los Angeles, JB was looking to move to the top step. It took 19 out of the 20 laps he had to get the lead from Josh Hill, but Brayton pulled it off with a clutch last-lap move.

We talked to Justin today to get his take on the weekend.

Racer X: First, congrats on the win! My first question is, what was even the prep for this? Did you ride supercross? Did you ride your supercross bike? It’s a pretty unique track and situation.
Justin Brayton:
Yeah that was the tricky part about it. You obviously want to ride some supercross, but you don’t want to take away from your outdoor season. So the Tuesday after Millville I went and rode some supercross, with supercross suspension, and I actually felt really good. I was having a blast, and rode all day Tuesday. Then I flew to California on Wednesday, and rode the Yamaha track on Thursday and Friday on my X Games race bike. It was fun to switch back for a week.

How did the track compare to a supercross?
The obstacles and the whoops, they weren’t quite as big as a normal supercross track, but, still, there are rhythm sections, and the ramp is pretty steep, with a pretty hard landing, so you want to have stiff suspension. The whoops, there were only six, but they were decent size. All in all, in was a short track, but it wasn’t a huge difference compared to supercross as far as the obstacles. And me coming from arenacross, I was used to that. I grew up racing that way, even on 80s I did fair races that were really tight like that. So I enjoyed it. 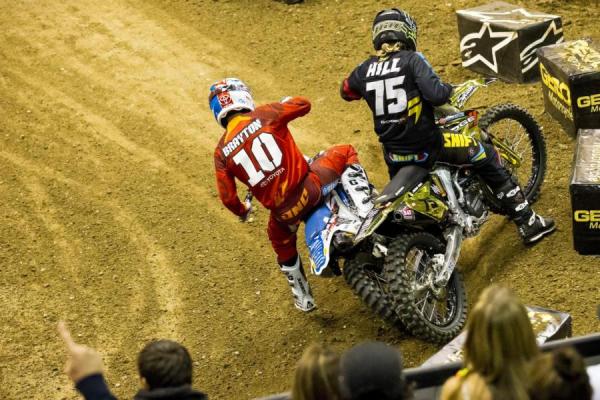 Yeah and you seem to do well at these one-off events. You’ve done well at X Games before, also the European races. What is it about your style that seems to work for this?
I’m not sure why. I think it’s much more chill. During the down time, you just kind of hang out in the pits. And the pits, you usually have your bike, some tools, a few chairs, and that’s about it. I don’t know. It’s so much more relaxed. And like I said, I grew up racing that kind of stuff. When I first started, it was funny, because people would always ask me why I would struggle outdoors when I was pretty good at supercross. But growing up, I never rode big, open outdoor tracks. Being from Iowa, most of the races I did were fair races and night races, even when I was in the A class and turning pro. That’s where the money was. Those races, that’s kind of what the overseas races are like, and that’s what the X Games is like.

So take me through the night. Heat race was okay.
Yeah heat race was okay. I was frustrated after it, because I had a bad start and it seemed like I was the fastest guy but ended up second. That’s exactly what I didn’t want to have happen. I didn’t want to go, be the fastest guy, and end up not winning. I wanted to win everything. I was fastest in practice and I wanted to win my heat and the gold medal. So I was a little frustrated to get second in the heat, but it fired me up for the main.

How sketchy was that first turn and start?
[Laughs] That was pretty much the whole race right there. I knew if I got a good start I could win, but if you’re down in the first turn, the race is over. So I just knew to stay on two wheels through there, no matter what place I was in. It worked, I stayed up and came out around third.

So you weren’t even trying to get the holeshot, you were just trying to stay up.
Yeah, exactly.

But it didn’t look like passing wasn’t easy, either!
No, it wasn’t! I’ve gone back and watched it, and it’s stressful to watch now, even though I know I’ve already won it! It was stressful for me, but it was awesome for the crowd, the fans in the staple center, and for everyone watching on TV. So, I would say that I definitely would have liked to have made the pass early and got a bigger lead, but now looking back, it’s cool to know I’ve won and the race was the dramatic.

Okay so how come you were able to make that pass, finally, on the last lap? Was it just a matter of getting more gnarly? Or did you have a spot picked out?
I did have a spot picked out. In the first turn, I could hug the inside real tight and still make the jump out of the corner. I thought for sure I would make the pass there. But the first five laps, I kind of hung back there, because in arenacross, if you’re in second and you start stuffing each other on the first or second lap, the top guys are so tight that you can get jockied from second to seventh or eighth in a heartbeat. So I wanted to pull a little gap on third. Then around lap seven, I started to try to make the pass, but he [Hill] was doing well, I guess, fending me off. And then exactly what I didn’t want to have happen, happened, and I got shuffled back to fourth. At that point, I tried to relax and regroup. I knew we were only halfway through the race, and I had time, but I needed to make some passes quickly. Then with one [lap] to go, you kind of just throw it all out the window and make it happen. 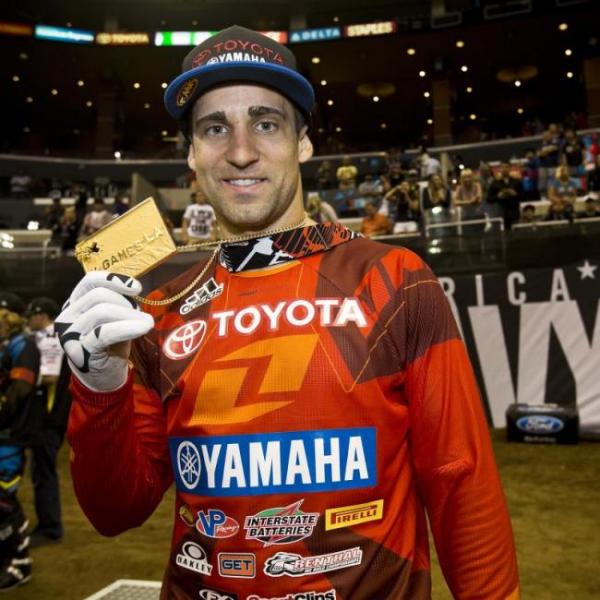 So, you said you would have been frustrated if you were the fastest guy and you didn’t win. At any point, were you starting to get nervous that it wasn’t going to work out?
When I went back to fourth. When I was in second, I was like “I’ve got this, I’m pretty sure I can make it happen.” I just needed to stay on two wheels and make it happen. When I went back to fourth, I was like, I really need to play my cards right. Because on a track like that, it’s not just about racing and going fast. It’s like chess, and you’ve really got to pick your spots. It was tough, and when I went back to fourth, that was a stressful moment.

What do you take from this? Is it confidence and momentum? How do you categorize this accomplishment?
That’s what’s difficult. I think in the motocross and supercross community, some people probably say “Oh, whatever.” But for me, my sponsors, my family, X Games is a really big event. We’ve grown up watching X Games. I’ve gotten two silvers previously, and I think when I’m 45 years old, and I look on the wall and see a gold medal, I’ll think that’s really cool. I think for the team it’s great, and for the sponsors. Maybe to the motocross and supercross community it’s not that big of a deal, but I think it’s pretty big for me.